In 2010, Eight 5-star hotels in France were awarded the distinction of “Palace,” meaning that they are the very best among the top hotels in France. The new Palace category was officially created in November, 2010 under former Secretary of State of Tourism Hervé Novelli in order to continue the development of the new hotel classification system established in 2009. The rating is valid for five years. Since then, three other Paris hotels have joined this hallowed group: The Mandarin Oriental  The Shangri La, and Le Royal Monceau, Raffles. 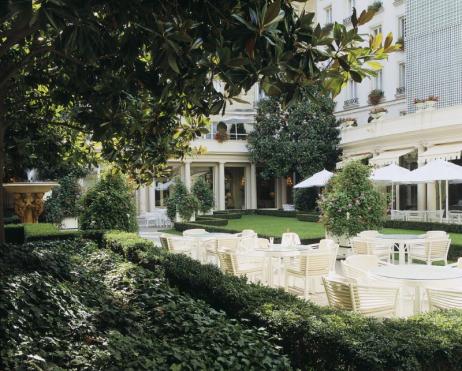 Le Bristol Hotel is the Grande Dame of Paris hotels. Standard-bearer on the prestigious Rue de Faubourg Ste. Honore, Le Bristol’s elegant white facade welcomes you to an antique filled, French-styled oasis. Service is superb and each room is uniquely decorated with the finest furniture and fabrics. Enjoy the indoor swimming pool and roof-top solarium. The gastronimic restaurant at Hotel le Bristol, Faubourg Saint-Honoré is geared to the seasons in more than just the menu. The decor changes to welcome each season. In summer, for example, the restaurant opens to a view of the largest hotel garden in Paris. Chef Eric Frechon, considered by many to be the best chef in France, delights diners with his three Michelin-star cuisine. Interestingly, Le Bristol is where Woody Allen chose to shoot parts of Midnight in Paris.
112 Rue Du Faubourg Saint Honore
75008, Paris 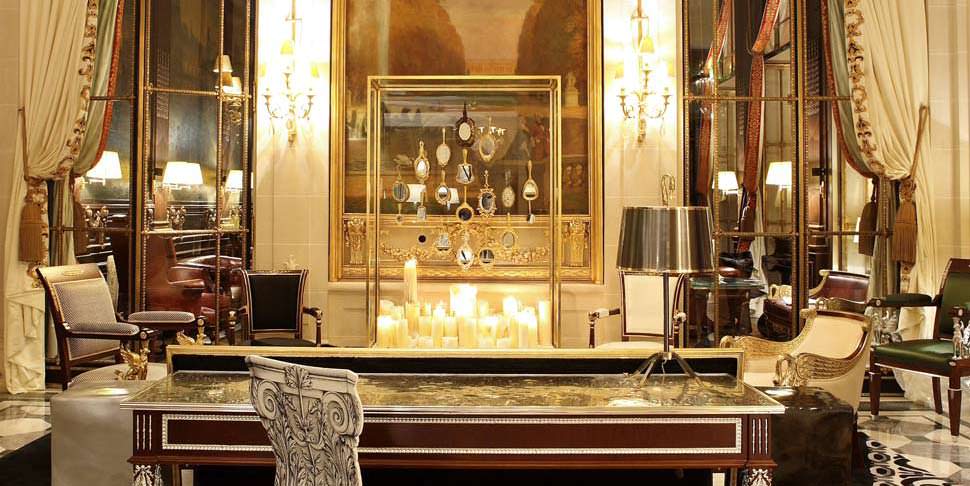 Tradition and elegance combine to make Le Meurice one of the finest hotels in Paris. Set in the heart of Paris, Le Meurice offers 45 suites and junior suites, most of which overlook the Tuileries Garden and also have spectacular views of the Paris skyline. Marble baths enhance the spacious, impeccably decorated guest rooms. If you want a Versailles-like experience, try Le Meurice. Oh, and the Le Meurice Restaurant is one of the finest in Paris. Chef Yannick Alléno’s three Michelin-star cuisine offers modern and original fare, served in the exquisite silver and white themed dining room overlooking the Tuilleries. Bar 228 is The place for a post-dinner drink. With a huge wine list and extensive collection of whiskeys and malts, just about any drink you desire will be available to you. Every evening, enjoy two jazz musicians who liven the soul of Le Meurice, from 7 p.m. to midnight. The pianist is accompanied by a bass guitarist, a guitarist or a drummer.
228 Rue De Rivoli
75001, Paris

A jewel set in the Place Vendome, Le Park Hyatt Vendome is a modern hotel with a classical style. Ed Tuttle, the hotel’s interior designer, was inspired by French classical architecture, which he has incorporated into the hotel’s contemporary design. This central Paris hotel also offers guests a host of dining experiences, with world-class restaurants and bars such as Pur’ Paris, The Chef’s Table, Les Orchidées, and La Terrasse. Honored with its first Michelin Star, Pur’ Paris offers an innovative gastronomic style from Chef Jean-François Rouquette.
5 Rue De La Paix
75002, Paris 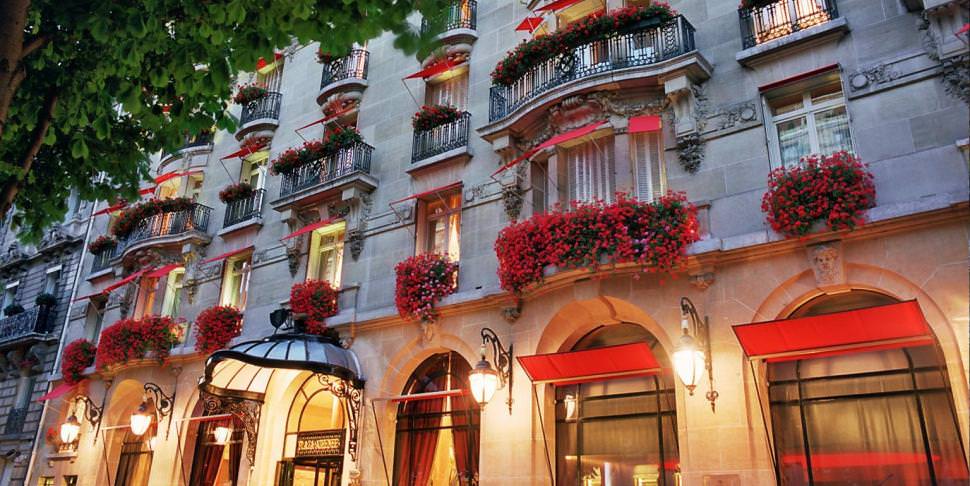 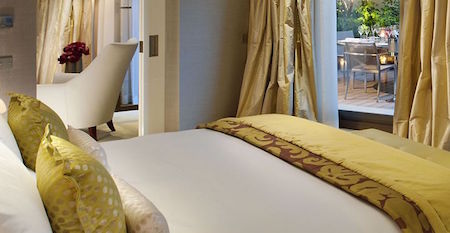 Part of the upscale chain, the Mandarin Oriental, Paris is situated on one of the most prestigious streets in Paris, rue Saint-Honoré.  With 99 elegant guestrooms and 39 suites, the hotel has some of the most spacious rooms in paris. You will also enjoy the fabulous restaurant overseen by award-winning chef and Culinary Director, Thierry Marx. The on-site spa is  a quiet oasis . It is without a doubt that the Mandarin Oriental is bound to be a Palace Hotel for a long while.
251 rue Saint-Honoré
75001 Paris 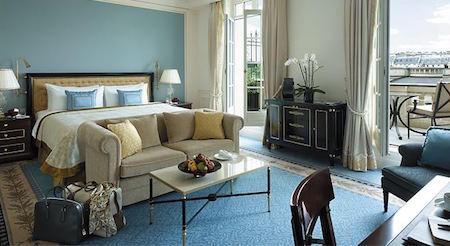 Expect royal treatment at the Shangri-La Paris.  Housed in a belle-époque building that was erected between 1892 and 1896 for Napoleon’s grand-nephew, Prince Roland Bonaparte, the hotel has all the Napoleanic signatures including the Bee, a symbol selected by Bonapart himself. The Shangri-La Hotel, Paris offers 101 rooms including 36 suites.  Richard Martinet directed the architectural renovations and Pierre-Yves Rochon designed the interior style Mixing Empire and Minimalist styles to a luxurious harmony. Rooms are designed to pamper and relax and the baths are plush. Although a bit out of the center of Paris, guests will enjoy superb views of the Eiffel Tower from 40 per cent of the rooms and most of the suites.
10, avenue d’Iéna, Paris
75116, France

If you love art, you will love Le Royal Monceau Raffles. From the moment you arrive you will be surrounded by art of all kinds, and your room will be artfully designed as well. Over the top chandeliers, venetian mirrors and its own art gallery makes this an eccentric, but beautiful and unique hotel. The hotel has 64 suites and  85 spacious rooms all uniquely decorated. Perfectly located near the Champs-Elysées and rue du Faubourg Saint-Honoré, you will not be far from the best of Paris shops and restaurants. The children and teens program, in keeping with a theme, features art workshops and other engaging activities.
37 avenue Hoche
75008 Paris

5-Star Palace Hotels outside of Paris