If you want to travel beyond Paris, be sure to consider  the Champagne-Ardenne region and/or Burgundy. These two areas have so much to see and do that you will be very busy. And if you are a lover of champagne or fine wine, you will be in heaven.

Many of the famous Champagne houses such as Taittinger, Mumm, Pommery and Pieper-Heidsieck are located in Reims (pronounced RHANS.) While here, be sure to take a tour; the champagne tours are quite interesting and end with a few sips of the bubbly.

Reim’s Cathedral of Notre Dame is the place where twenty-five of France’s kings were crowned; it is one of the most famous cathedrals in the world. Next door is the Palais du Tau, a former archbishop’s palace that is now a museum housing treasures from the cathedral and the royal coronations. Although the cathedral and many other buildings in Reims were damaged during the war, they have been lovingly restored or reconstructed.

You may want to take the Routes du Champagne where sign-posted roads take you through the lovely Marne Valley to Epernay; which also contains famous Champagne houses, most notably, Moet & Chandon. Epernay is a charming little town with more than 200 miles of champagne cellars and tunnels underneath the city.

Troyes (pronounced TWAH) is located half way between Paris and Dijon. You will be amazed by the many 16th century, half-timbered homes still standing in this quaint old town. If you decide to visit, be sure to tour the many museums and churches. Troyes is also known for its many factory outlet stores located just outside the city – a bargain-hunter’s paradise.

The Burgundy region of France is one of our clear favorites. Burgundy, or as the French call it “Bourgogne” (pronounced Boor GONE yeh), offers unforgettable rolling-hill vistas of vinyards for as far as the eye can see, and it is at the crossroads between the 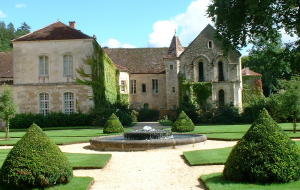 north and south of France. Some of the most gorgeous towns can be found in this region as well as some quite spectacular wine. This region is home to significant Romanesque and Gothic cathedrals and monasteries. The following towns are well worth a visit: Autun, founded by the Roman Emperor Augustus, contains several Roman ruins. Auxerre (pronounced oh SAIR) is a perfect stopping place on the journey from Paris to Dijon. The ancient clock tower alone is worth the trip. Two ancient abbayes in this area are Cluny and Fontenay. Fontenay, built in the 12th century, has been restored to its early glory. The town of Cluny is charming although only a small portion of the original Abbaye de Cluny still stands today.

Dijon, the cultural and commercial capital of the region, is beautiful and well worth a 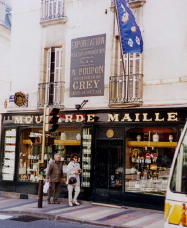 few day’s stay. The Eglise Notre Dame dated from the 13th century is a spectacular church. The Musee Archeologique is located in the 1000 year old Abbaye de St Benigne and the Musee des Beaux-Arts is housed in the former home of the Dukes of Burgundy. It is regarded as one of the finest museums in Europe. The nearby Chateau du Clos de Vougeot is the headquarters of the Brotherhood of the Knights of Tastevin and it is open for visits.

Beaune, located about 25 miles south of Dijon along the famous Route de Grande Crus, is 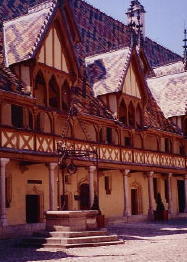 an exquisite town of winding medieval streets set in the midst of the region’s most celebrated vineyards. A must-see is the gorgeous Hotel Dieu, a former hospital that is now a spectacular museum. Be sure to also visit the Musee du Vin de Bourgogne, featuring the history of winemaking from ancient times to the present.

Burgundy wine is the star in this region accompanied by fine cuisine and the wonderful barge cruising on the lovely Burgundy canals. For a memorable road trip, take the picturesque drive along the Route de Bourgogne between Dijon and Santanay.

If you love France, you will love Champagne and Burgundy.

Wine Appreciation in Champagne and Burgundy

Two of Europe’s most popular wine regions – Champagne and Burgundy – have been painted in a new light with Natalie Maclean’s entertaining travelogue, Red, White, and Drunk All Over: A Wine-Soaked Journey from Grape to Glass. She laments the state of most wine-orientated literature: “When I read about wine, I often get the odd impression that it has no alcohol in it.”

Natalie’s first stop in her global tour of wine is in Burgundy’s Côte d’Or, into the area of vineyards which reminds her of the phrase “la France Profonde“ – deep France – the real thing.

Her destination is the uber-expensive Domaine de la Romanée-Conti, home to some of the most expensive (and most delicious) wine in the world. Exploring the practice of pruning the vines back to force nutrients into a limited amount of grapes, it becomes apparent to the reader how much goes into producing this expensive liquid. Indeed, the amount of information that the vineyards collect on every square inch of their plot is staggering.

Biodynamic viticulture – probably a topic unknown to the casual wine drinker – is explored at ease with Natalie’s visit to Maison Leroy. As a négociant, a producer who buys grapes from other vineyards to mix with their own, the grapevines are left to survive the French seasons with no chemicals such as fertilizer, only a bit of unusual “homeopathic” treatments such as stinging-nettle tea and cow’s dung.

“Most people have heard of champagne, the wine, but few know much about the Champagne region, just ninety miles northeast of Paris” says Natalie. Witness to multiple wars throughout the centuries, the region is steeped in history, the result being a strong cultural identity. The production process of champagne borders on the absurd, and while explaining it in detail, Natalie manages to ruin a $500 bottle of Cristal and hilariously sprays a cellar worker with half a bottle of Bollinger.

If the book wasn’t fun enough, Natalie’s website Nat Decants certainly is. Her free monthly newsletter includes wine reviews, recipes, and other useful information. The best feature is the food and wine matcher, which offers up useful pairings for a near unlimited number of entrees, such as pairing quiche lorraine with Pinot Blanc. Merlot goes best with chicken stir fry, and for dessert, pour a Vin Santo or Riesling Spatlese with the apple fritters.

If you haven’t considered touring the vineyards in France or elsewhere –or maybe you have and want to hear someone else’s perspective – then pick up a copy of Red, White, and Drunk All Over today.

Thanks, Jen. I love France and the Champagne - Burgundy region is very special.