When I lived in France as a student, I would often peek through the windows of Ladurée on the Champs-Elysées and admire the mind-boggling array of flavors (like blackcurrant violet, caramel with salted butter, orange blossom and black licorice) of their airy macarons. However, since I knew buying a box of these little wonders would mean that, on my student budget, I’d have to forfeit either lunch or wine for the next week, I refrained (forgoing wine as a student in France would have been unthinkable!). 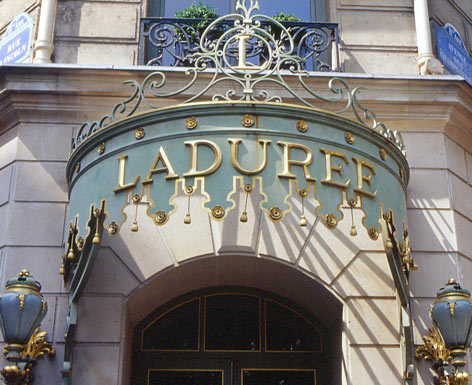 Laduree on the Champs Elysees

A few years later, while working as an instructor for UCLA’s summer program in Paris, I finally had my chance to cross the threshold into Ladurée’s intoxicating green and gold gilded interior. It was a Saturday morning and my friend had called around 8:00 to see if I wanted to prendre le petit-déjeuner (have breakfast). Not imagining that we would be eating at one of the most refined breakfast spots in Paris, I pulled on a tank top, wrinkled skirt and flip-flops and flew down the cement steps and into the métro. Thirty minutes later, I was seated on a green and white velvet chair, eating one of the most amazing (and expensive) goat cheese omelets my 30-year-old taste buds have ever savored, (and feeling incredibly under dressed). However, all self-consciousness and anxiety over the bill (which ended up being over 30 Euro per person- not exactly a budget-friendly breakfast) faded as I bit into one of Ladurée’s flakey, golden pain au chocolates and took a sip of earthy espresso. 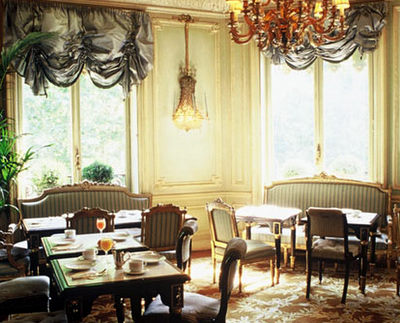 The Ladurée bakery was founded in 1862 by Louis Ernest Ladurée, a miller from southwestern France. The first Ladurée was located at 16 rue Royale in Paris. Ladurée’s wife, Jeanne Souchard, had the winning notion of mixing the concept of the Parisian café and the pastry shop, resulting in the Parisian salon de thé (tea salon). This concept became an immediate hit by replacing literary salons (which were becoming outmoded) and providing a place for civilized women to meet in comfort. Ladurée’s current incarnation on the Champs-Elysées opened in 1997 by the Holder Group. Under their leadership, Ladurée has become an international phenomenon, with salons in Monaco,  Switzerland, England and Japan. Most of the Ladurée locations are full-service restaurants with breakfast, lunch and dinner menus. 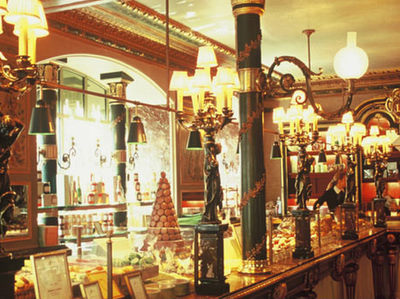 Since my initial visit, I’ve been back to Ladurée on several occasions.  Each time, I am impressed by the quality of the plats (dishes) and the freshness of the ingredients used. I wouldn’t call Ladurée an innovative restaurant (other than their macaroon flavors, of course) – but then again, that’s not its purpose- at least for this francophile. Ladurée is where I go to be transported in time, to admire impressive paintings and period furniture, to enjoy quality French cuisine, and blow my last Euros on a memorable meal before heading back to the States.

I plan to travel light to Paris. You mentioned that you were in flip flops. is there a dress code for the restaurant at breakfast or lunch time?

I am afraid I will just be slightly better than flip flop - a pair of comfortable walking shoes.

I too have had breakfast a Laduree. There is no dress code that I know of, but I would dress "country club casual" For instance, long pants and a golf shirt is as casual as I would be. There will be many business people there. Terri

[…] streets that branch off of the Champs- Elysées. One  exception to this would be the famous Ladurée (located on the Champs-Elysées), which is worth every euro. More information on the 8th […]