Ancient sporting halls, monastic buildings, former monasteries and nunneries are all options for accommodation in Paris, which has so much more to offer than standard chain hotels. With more than 73,000 guest rooms, including 10,000 in four-star hotels and above, the French capital has the widest choice of accommodation in all of Europe. The most attractive of the small Paris boutique hotels are called “hotels de charme.”

These places, mainly in older buildings too small for hotel chains, tend to be centrally located, but can be found  in most every arrondissement (district) of old Paris. Most of these character hotels lack the lofty lobbies of the grand hotels; and their rooms are usually small and their elevators the size of closets. But what “hotels de charme” lack in space, they make up for in, well, charm. And many of these hotels have been renovated in recent years, so they have modern bathrooms and a range of amenities such as satellite TV and WiFi. Here is a list of our Favorite Paris Boutique Hotels:

Hotel Raphael, with 90 rooms, just qualifies as a Paris Boutique hotel. Atypically, it does have a grand lobby, which could be mistaken for an art gallery with its stylish, richly paneled wood walls hung with oil paintings; to say nothing of  its statuary, oriental carpets on polished marble floors, and its wall sconces and chandeliers casting a soft, inviting light. The Hotel Raphael has more of a hotel feel than many older establishments, which are like large, sumptuous, private homes. Its grand rooftop terrace provides majestic views of the Eiffel Tower, the Arc de Triomphe and all of central Paris.

Even the smaller “chambres de charme” are spacious, with huge walk-in wardrobes the size of Hong Kong amah’s rooms, built for the days when guests traveled with steamer trunks. Bathrooms are artistically decorated with patterned or mosaic tiles, mainly depicting pastoral scenes. The 10 rooms on the 15th floor are all inter-connected so they can be used as suites, perfect for families who need the extra space. 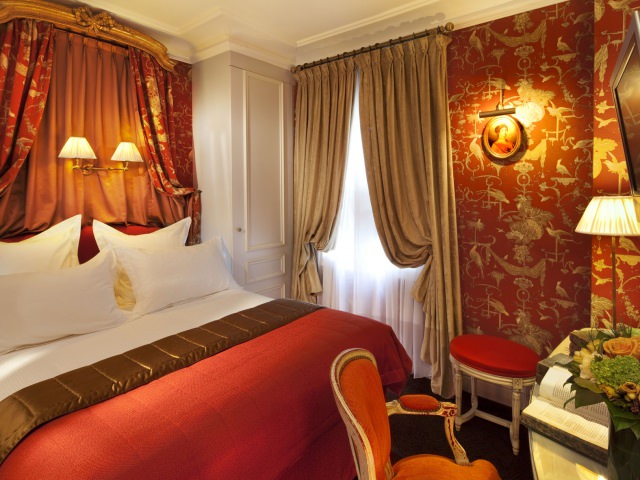 The friendly Hotel de Buci near fashionable Boulevard Saint Germain is soothingly atmospheric, with leather chairs in the lobby, potted palms and an intriguing collection of Art Deco paintings and statues, including many of panthers. The ancient building, which has been a hotel since the start of the century, was renovated only two years ago, leaping from a one star to a four star hotel.

Rooms are small, but comfortable. The quietly elegant decor, with patterned curtains and bed covers, and art deco wood furniture, is different on every floor. Triple-glazed windows keep the more desirable street front rooms “calme.’ Room 11, on the first floor (above the reception) facing bustling rue Buci is especially pleasant with a close-up view of the street life just below, and a large bedroom and bathroom. All rooms have tubs and showers, with the larger superior rooms suited for families. 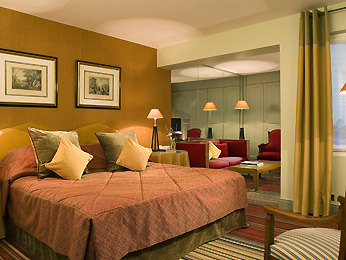 Literary types will appreciate the 20-room Hotel Le Stendhal, named for the French author of La Chartreuse de Parma and Black and Red. Henry Beyle, who used the pseudonym Stendhal, lived here until his death in 1842. The lobby is small, but pleasant with an adjoining, mahogany-lined bar area with a fireplace, bookcase and numerous photographs. Breakfast is served in an atmospheric stone-walled 18th century basement room.

Every one of the 20 elegant rooms, decorated with antique furniture, patterned wallpaper and carpets, is different. The 26-square-meter junior suite, with room for an extra bed, is best for those traveling with children. The most extravagantly decorated room, the Stendhal, is in sumptuous red and black, with rich red curtains and bedspread and black wood furniture. The Stendhal room and the suite also have Jacuzzis. 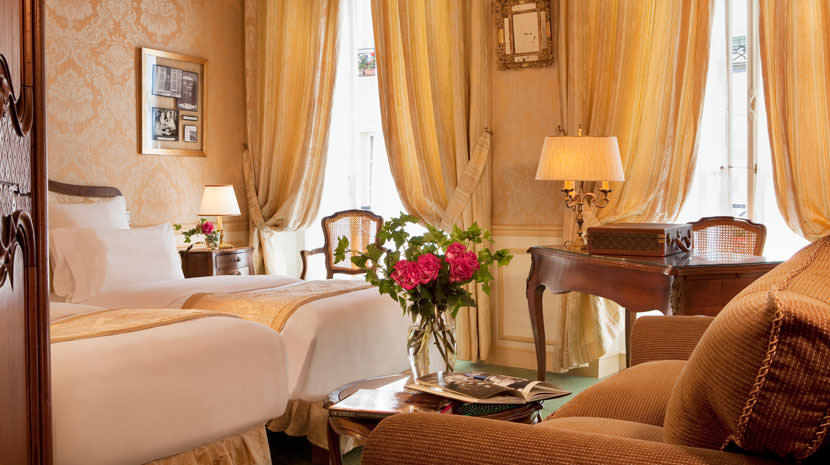 Perhaps the greatest collection of interesting, moderately priced little hotels is in Rue Jacob, running parallel to the Boulevard St Germain. Hotel d’Angleterre is set in a former British embassy where the treaty of Paris was drawn up in 1786. “At this former British embassy was planned the independence of the United States of America,” its brochure claims rather grandly.

The hotel is pleasant, understated, perhaps a touch stuffy, a l’Anglais, with plenty of wood, brass and glass. Hemingway once dwelled here (although the burly wordsmith apparently slept around, as several Paris hotels claim him as a former resident.) The agreeable lobby includes a lounge with comfortable leather seats. Many rooms overlook the street. 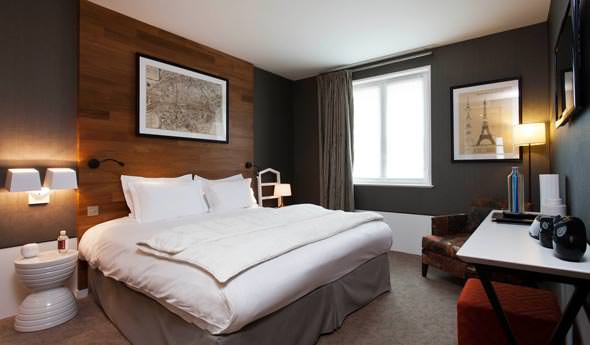 La Villa hotel will appeal to modernists. A student of Philipe Starck designed the furnishings and decorated the hotel, which opened 10 years ago. Those familiar with the Hong Kong Peninsula’s popular Felix bar will recognize the distinctive, futuristic style. Everything in this hotel, popular with designers and artists, is ultra-trendy, stylish, all curves and futurist shapes. Stools are shaped like teardrops, bathroom sinks are set in frosted Plexiglass counters and overhead Halogen lights illuminate room numbers on the hallway carpets. 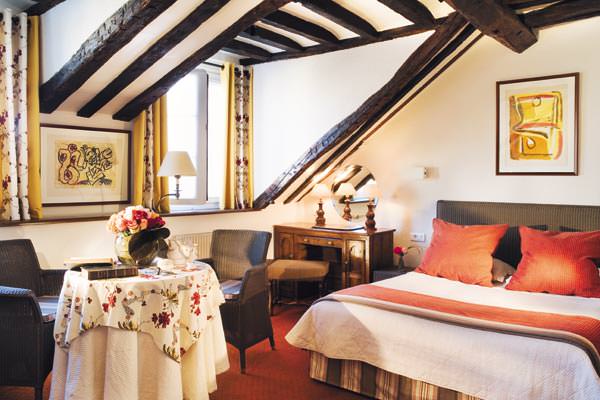 Hotel de Lutece
Several small but attractive hotels are also located in the oldest part of the city on the banks of the River Seine. The Hotel Lutece’s pleasant lobby has carpets on tiled floors, a fireplace, and huge, ancient wooden roof beams across the high, whitewashed ceiling. The 23 rooms in this 17th-century building are about 14 square meters, but comfortable and tastefully decorated. Guest rooms on the courtyard have showers, while those facing the street have baths.

A number of Parisian hotels have especially fascinating backgrounds. The tasteful, centrally located Hotel de l’Abbaye was part of the St-Joseph des Cames monastery until the Revolution and then a private residence in the 18th century until becoming a hotel in 1973. Its wood paneling, overstuffed sofas and chairs and an open fireplace lend the lobby a gracious, countrified charm.

This Paris Boutique Hotel is a sunny haven with a delightful private garden where breakfast is served during fine weather. The 46 rooms in the recently renovated l’Abbaye overlook the courtyard or the garden. Ranging from quite small to grand, all rooms are luxuriously decorated. The four large suites have private rooftop terraces while ground floor rooms 3 or 4 have private garden areas, perfect for active children. 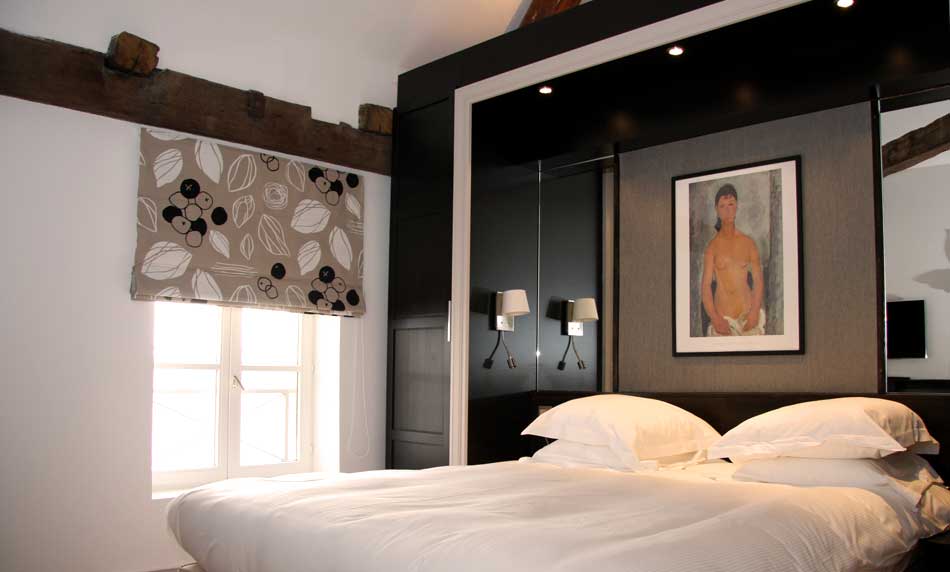 Hotel du Jeu de Paume, also on Ile St Louis, started off as a tennis court in 1634 when aristocrats were building homes on the island. The large, galleried, timber-framed court was later turned into a warehouse, craftsmen’s workshop and finally a hotel in 1988.

The large, bright lobby features tile floors, stone walls, ancient beamed ceilings and a shaggy sheep dog who is friendlier than the somewhat stiff reception staff. Pictures of the old courts for jeu de Paume (the predecessor to tennis), ancient tennis rackets that look like snowshoes, and a display of rather odd sculptures, of hands, faces, bodies, decorate the lobby. 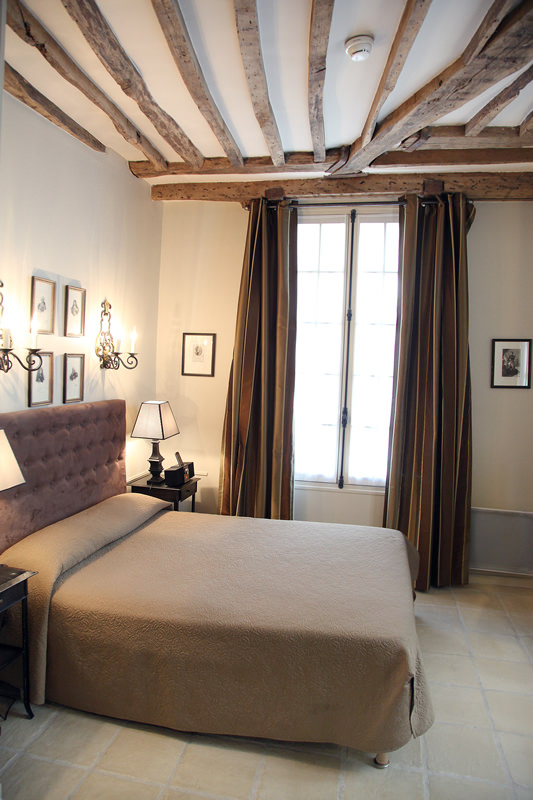 The nearby 20-room Hotel Saint Louis en L’Isle has two junior suites with space for an extra bed. Some rooms in this 17th-century building have balconies overlooking the street.

A tight, winding staircase leads to the basement breakfast room, like a cozy cave with polished, tiled floors, vaulted stone ceiling and walls and tapestry or needlepoint chairs.

FOR OUR PICKS FOR HOTELS IN PARIS, BY ARRONDISSEMENT, CHECK OUT THE FOLLOWING POSTS:

Me and my wife stayed at the hotel du jeu de paume for a couple of weeks October and we have had a really great time there. We were in Paris for business and this hotel was definitely a perfect choice. The single bedroom apartment we booked was great, beautifully designed and plenty space to store our stuff. And perhaps the best part though was the staff - they were all very charming and never missed to greet and chat with us.