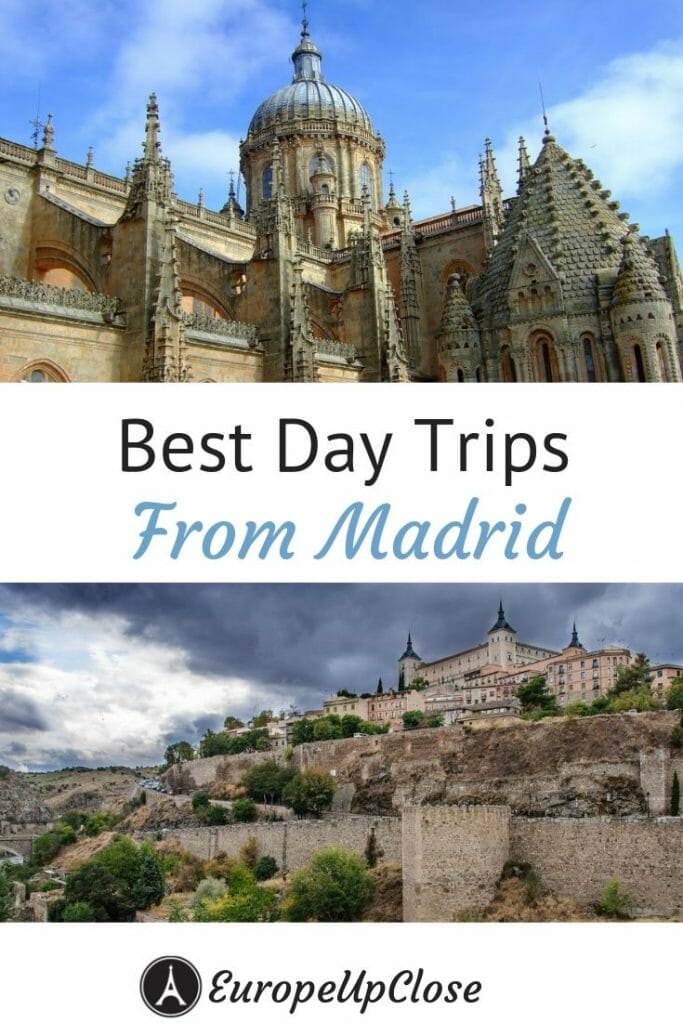 Madrid may be one of the best places to see when you’re in Spain, but it definitely isn’t the only jewel worth your admiration. Spain is mesmerizing, and there’s so much to see! Thankfully, many of these other places can be reached as day trips from Madrid, so you don’t have to puzzle out your itinerary too much.

Surrounded by a trifecta of UNESCO World Heritage Sites, Madrid’s central location and status as a transportation hub within Spain makes getting out and exploring the surrounding towns a breeze. Here are some great places to spend an afternoon out of the city and further explore Spanish culture.

In just two hours or less, in the comfort of a train, you can see some of Spain’s amazing towns and cities! Let’s get started on the best day trips from Madrid that you should definitely add to your itinerary.

Once Spain’s capital, Toledo still sports much of its old grandeur. It’s as if Toledo is frozen in time, its ancient monuments still standing defiantly against the ravages of the years. This makes it a must-do day trip for anyone in Madrid! Don’t miss its spiritual landmarks from the city’s Catholic, Islamic, and Jewish history. I also found the natural view of the city, such as the River Tagus, a sight to behold. If you can, stay overnight to experience Toledo at its best. 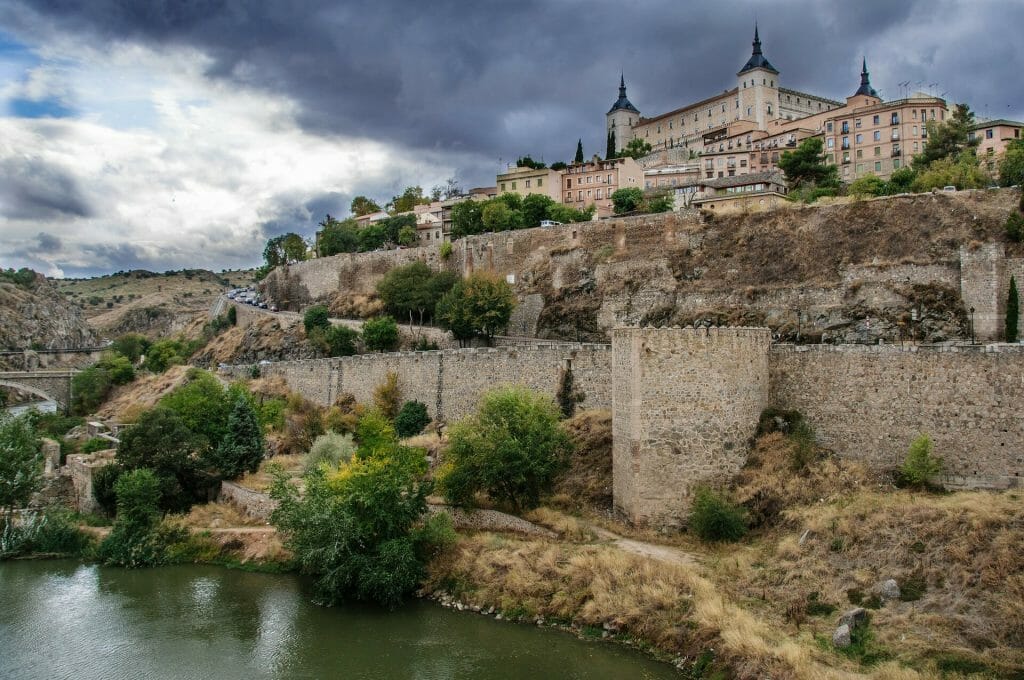 How To Get From Madrid to Toledo:

From Madrid, go to Atocha Station and board the high-speed trains bound for Toledo. You’ll get there in a little more than 30-45 minutes! You can book your tickets in advance via the RENFE site, since they sell out during peak season. If you want to enjoy the sights more, you can go to the Plaza Eliptica and take the ALSA bus.

What To See in Toledo

Don’t miss the Toledo Cathedral, with its overwhelming interiors! Drown in the beauty of the art, and in the solemnity of the vast space.

Visit the 15th century Cathedral to see paintings by Titian, Goya, Raphael and El Greco, who called Toledo home in his later years. Explore the military barracks and marvel at the beauty of churches like San Juan de Los Reyes and the Jesuits Church. Wander the Alcazar castle, which was nearly destroyed in 1936 and then rebuilt, and stroll along the defensive ramparts of the city walls.

Toledo is known for its excellence in crafting swords. Merchants sell ornately designed swords all over town, and will ship them directly home for you. Ceramics and a gold and black enamel, often used to make plates and spoons, are also popular souvenirs. Sit in the Plaza de Zocodover to relax and people-watch or browse the Tuesday market and explore the shops and cafes on Calle Santo Tomé.

To really get into the culture and the sights, it can be helpful to understand the history. What a history it is too. For more on Toledo history, read this article!

Salamanca is hailed to be one of the best-preserved Renaissance cities in the continent. It’s also a UNESCO World Heritage Site and home to the oldest University in the country. I think of it as a more laid-back cousin of Toledo, with the same jaw-dropping views and much fewer tourists. I enjoyed a few excellent museums here, too! 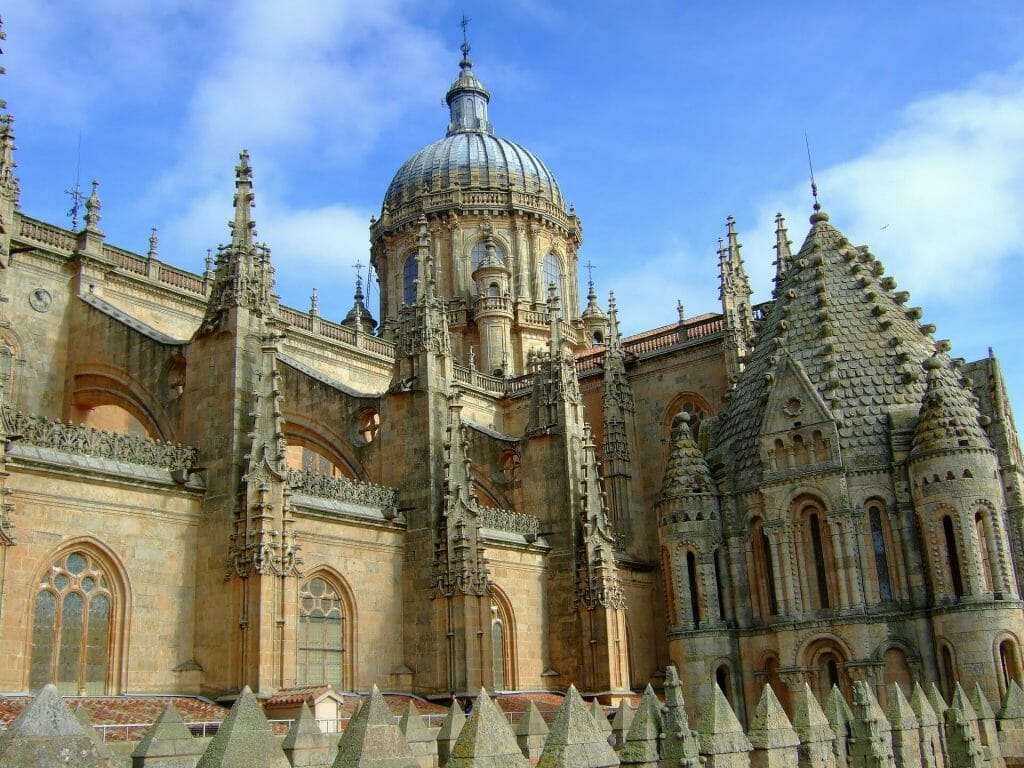 How To Get from Madrid to Salamanca:

From Madrid’s Chamartin station, board a train that leaves for the Salamanca station. The trains leave 4 times a day, and the travel time is approximately 2.5 to 4 h. From the train station, you can get to the Salamanca city center in around 15 minutes. You can also take the ALVIA bus, which takes about 1.5 hours.

What To See in Salamanca:

Don’t miss Plaza Mayor, considered to be the best square in the whole country. The New Cathedral is also a wonderful sight, with its ever-evolving carvings. I spotted an astronaut engraved here! The Casa de las Conchas is a bit eccentric, but nevertheless beautiful — it is covered in seashell designs, hence the name. Time your visit anytime between 1 to 3PM, too! This is Salamanca’s lunchtime, and it’s when the biggest and best servings come out of the kitchens!

Home to yet another UNESCO site, Segovia is about 2 hours by train from Madrid. While you could easily spend a few days here, you can get a good taste of the city in an afternoon. Segovia’s main attraction is its 1st century Roman aqueduct, an engineering marvel that brought water to the city. Azoguejo Square provides a great vantage point for viewing the aqueduct.

Most tourists go to Segovia just to see the immortal Roman Aqueduct, thought to date back to the first century. But the whole city is worth a tour, from the former Royal Mint to the armory museum that is part of the magnificent Alcazar. I also got a kick out of trying the famous delicacies here, including a Spanish version of the Filipino lechon de leche!

Segovia’s Alcázar, known as the inspiration for Cinderella’s castle in the Disney cartoon, was the site of King Philip II’s wedding and is currently a museum. The 18th century Gothic Cathedral and Museo de Segovia, home to historical artifacts and art, are also worth a visit to further understand the area’s rich history and culture. 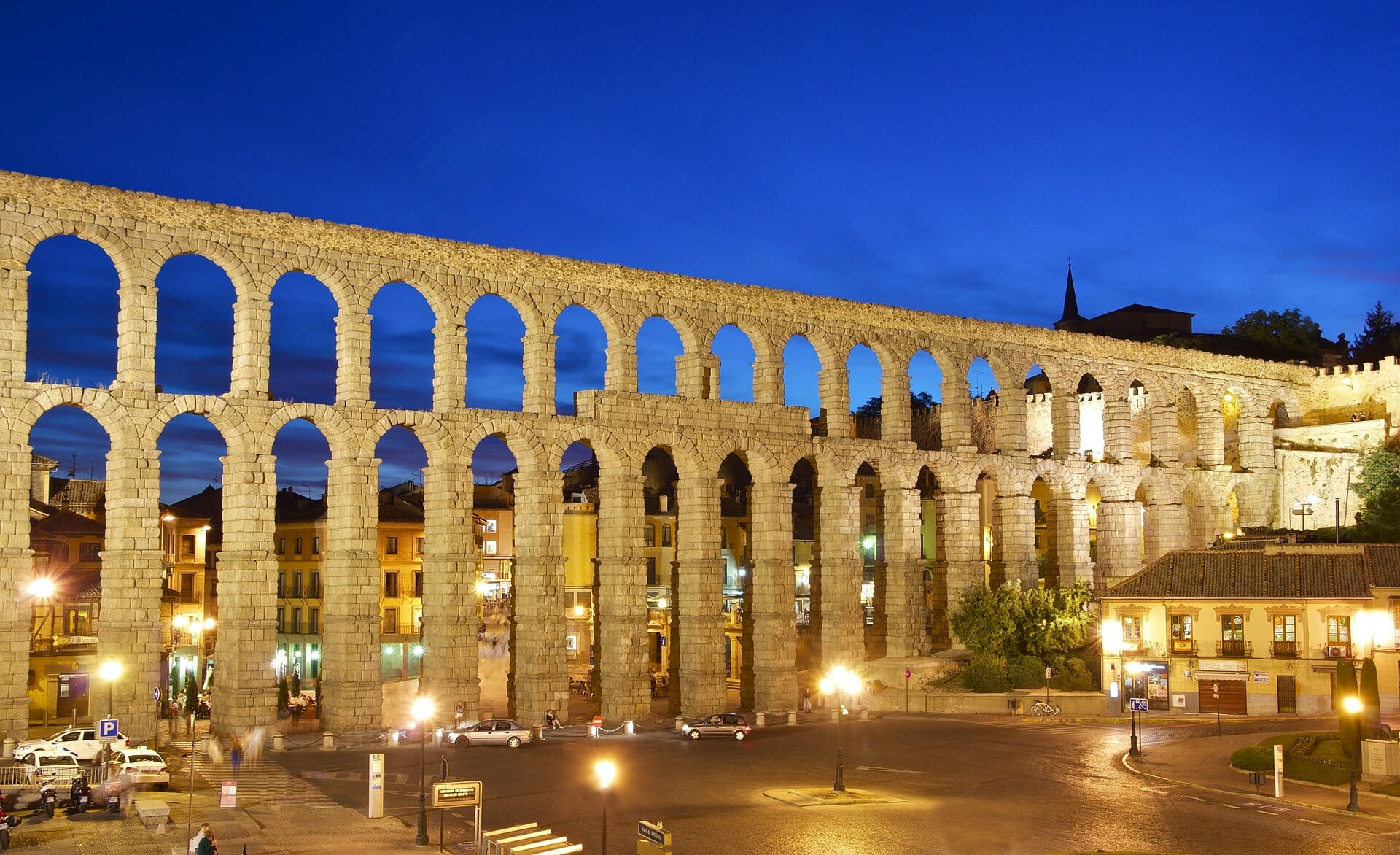 How To Get From Madrid to Segovia:

There are two trains that leave for Segovia. The Atocha station has regional trains that leave in erratic schedules, taking a scenic 2-3 hour trip to Segovia Station. The high-speed trains from Chamartin, on the other hand, leave regularly and arrive at Segovia-Guiomar in under half an hour.

What To See in Segovia:

Aside from the common touristy places, head to Vera Cruz outside the Old Town. I found this to be a little secret of the locals — the church is a 12-sided structure that was built in the 13th century, by none other than the Knights Templar! To read more about the rich history of this town before visiting, check this article out!

This one tends to be overlooked by most tourists who flock en masse to the above-mentioned cities. But Avila has a claim to fame, as the “Town of Stones and Saints”. It is the birthplace of St. Teresa (founder of the Carmelites), and it also has the most density of Gothic and Romanesque churches in a single place. The “stone” part cannot be missed — the town has more than 80 towers, and 9  gates from which people enter! 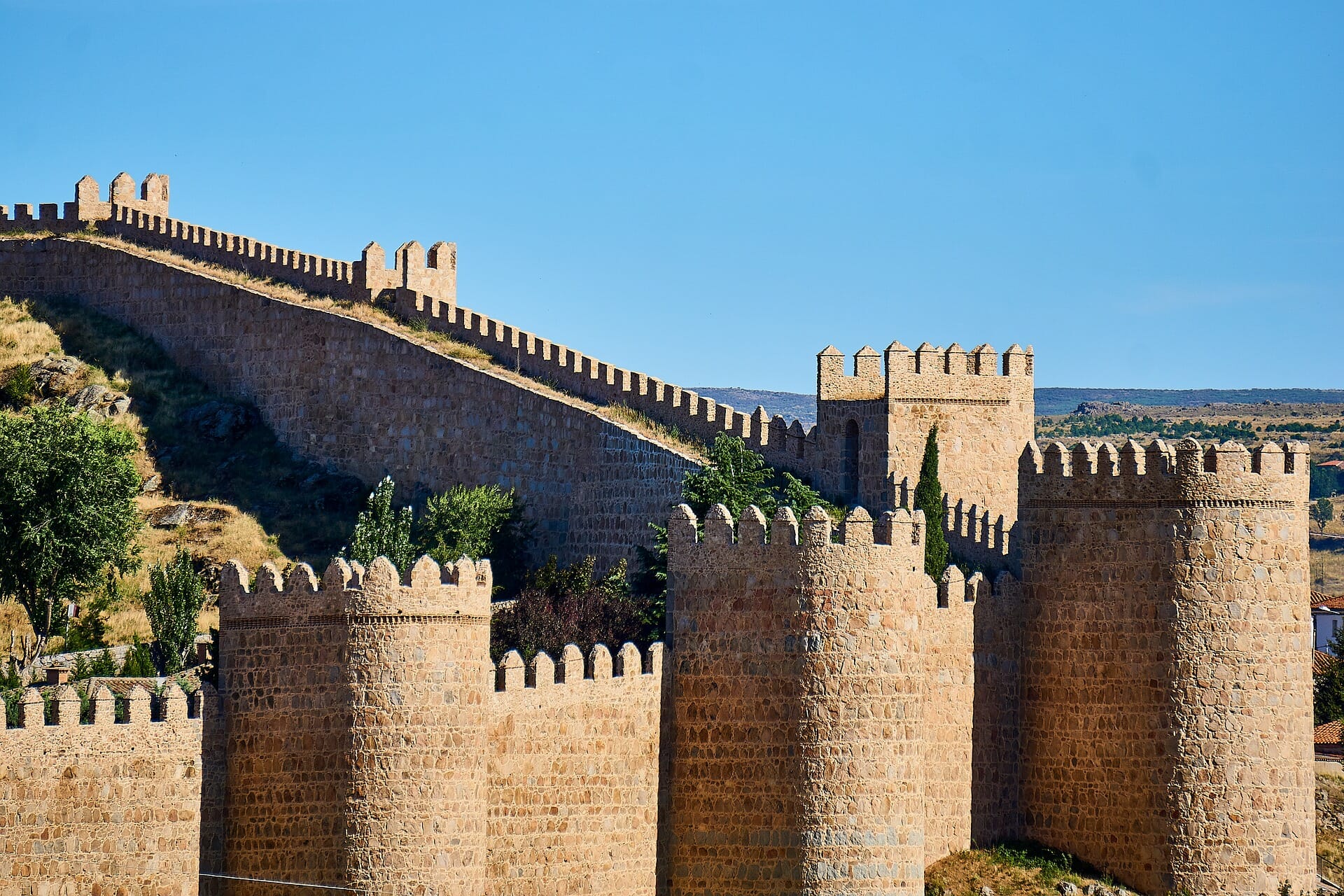 How To Get From Madrid to Avila:

From Madrid’s Chamartin station, take the TRN train which would take you to Avila in about 90 minutes. The regional trains are only a bit slower, taking two hours to reach the Avila station. From there, the town itself is an easy 15-minute stroll.

What To See in Avila:

I have seen a lot of old towers and fortifications, but seeing so many of them at once in a single place is something else entirely! The walls are so strong that you can still walk atop some of them. The best ones are Puerta del Alcazar and the Puerta de San Vicente.

From Madrid to Cuenca

For this last entry, let’s move away from the stunningly elegant to the stunningly jarring. Smack dab in one of the least-populated provinces in the country is the well-preserved town of Cuenca. The main attractions here are the casas colgadas, hanging houses that teeter over the dizzying cliffs! The first thought that entered my mind was, “why aren’t these houses toppling down?” You really have to see them first-hand to see how awesome they are! 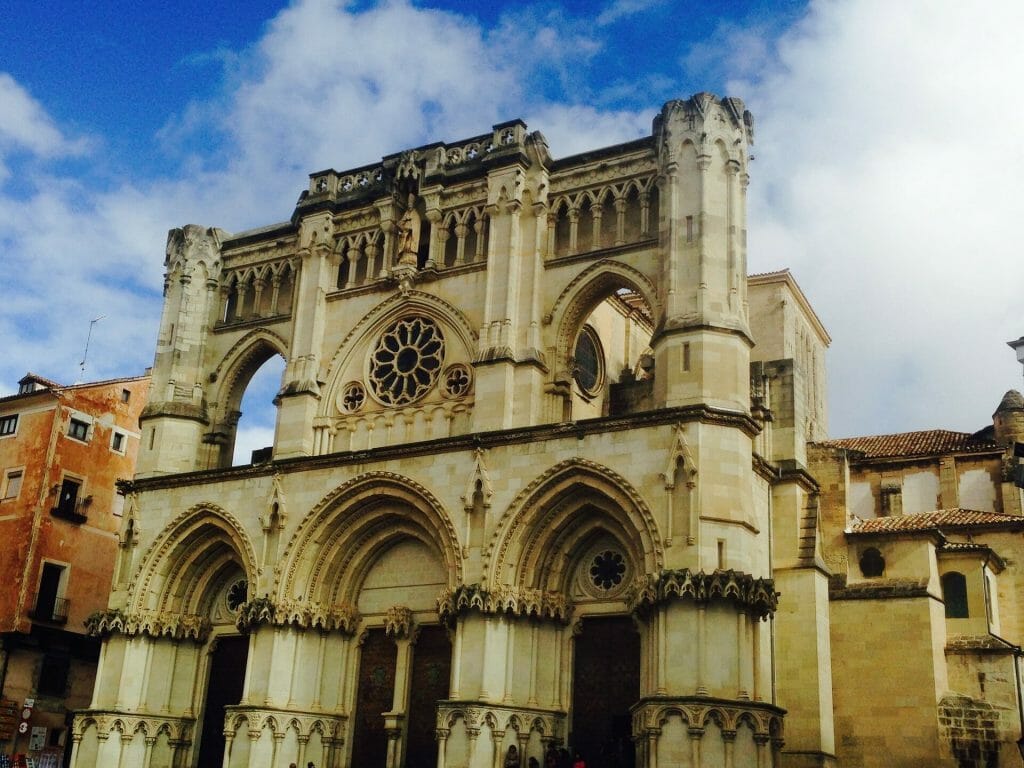 How To Get from Madrid to Cuenca:

Head to Madrid’s Atocha Station, and board one of the hourly trains bound for Aranjuez and then switch trains to Cuenca. The journey is about 3 h – 3.5 h.

What To See in Cuenca:

Cuenca loves its heights. Aside from the casas colgadas, the San Pablo Bridge is every acrophobic’s worst nightmare! The Museum of Spanish Abstract Art is located within one of the casas colgadas. It’s the place to bee if you’d steer clear of extremes.

Spain has something for everyone, so whether you’re in for just an afternoon of pretty sights or an in-depth exploration of culture and history, take your pick among these five towns and cities and experience Spain like never before!

El Escorial is another UNESCO World Heritage site close to Madrid with trains regularly making the 45 km journey between the two towns. The town is most famous for being the location of Spain’s largest monastery, the Royal Monastery of San Lorenzo de El Escorial. 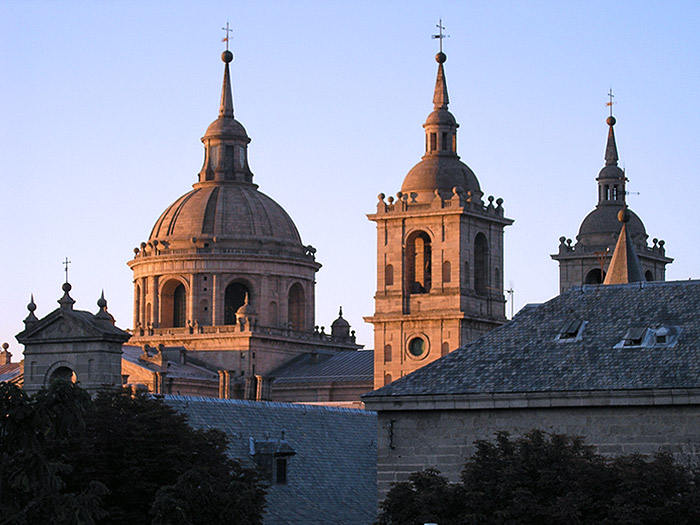 Built in the 16th century, the Monastery was created by King Philip II as a mausoleum. The grounds now contain a basilica with gilt bronze statues, a monastery, a beautiful library, and living quarters. The remains of Phillip II and his parents, Charles V and the Empress Isabel of Portugal, are housed here. The Chapter House showcases a collection of paintings from masters like Titian and Tintoretto and houses El Greco’s work, “The Martyrdom of St. Maurice”.

There are many options to venture outside the Spanish Capital and explore some smaller towns and cities. Day trips are great, because you don’t have the hassle to switch hotel rooms and get used to a new surrounding and you can actually see quite a bit, especially if you go on organized tours that pack in the highlights. Enjoy your time exploring Spain. 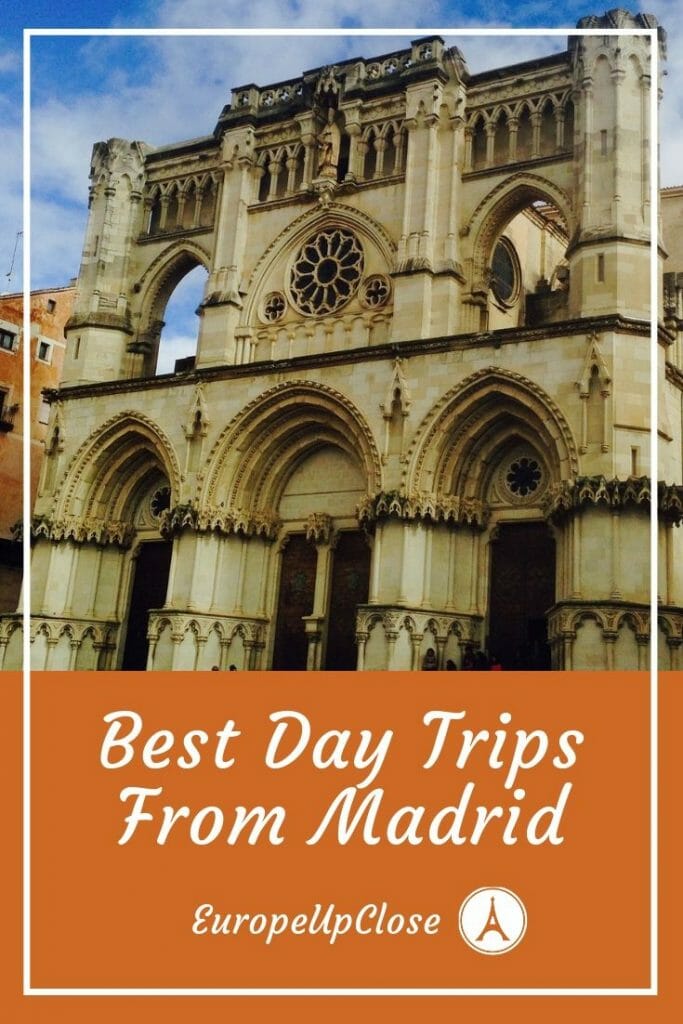 Loved reading this! Madrid looks like such a great place to visit, definitely need to go now!