Once an unassuming centrally located city, Toledo, Spain has now become one of the country’s main attractions—and rightly so. It is filled to the brim with historic buildings, a collection of religious structures and interesting museums. In the town center, a maze of narrow streets makes getting around both a challenge and a wonderful experience. While strolling around, visitors will stumble upon pretty plazas, imposing buildings and unexpected stores. Join us for a tour of Toledo Spain’s top 7 unforgettable attractions. 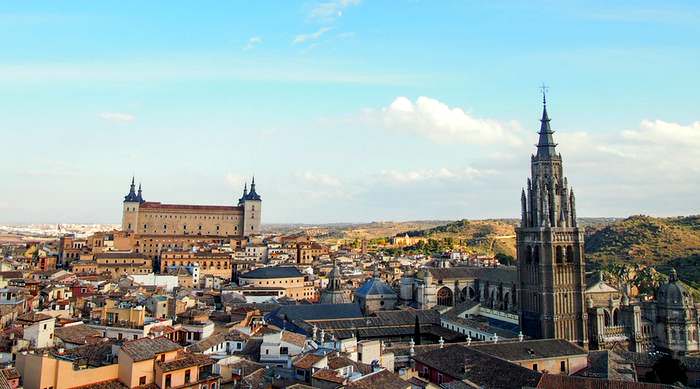 Toledo is a hugely significant city that’s played a pivotal role in the development of the country of Spain. Not to delve too deep into the town’s wealth of history, it suffices to know that Toledo was once the main location of the court of Charles I and is well-known for its peaceful co-existence of three cultures—Jewish, Muslim and Christian—which is reflected in the presence of historic synagogues, mosques and churches. A religious center for many centuries and a stronghold of the Spanish church, Toledo is still the seat of the Roman Catholic Archbishop of Toledo, who is also the primate of Spain and essentially the most powerful Catholic man in the entire country. 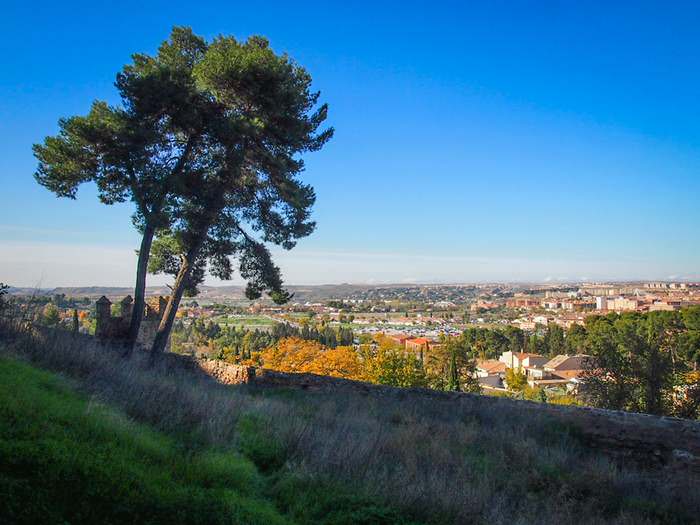 View of the Surrounding Countryside from Yoledo’s Medieval City Walls

Perched atop a hill around which flows the River Tagus, Toledo is truly a sight to behold. The view of the old city from across the river is nothing less than spectacular. It’s especially beautiful around dusk, when the town’s lights are lit and the sun is setting. 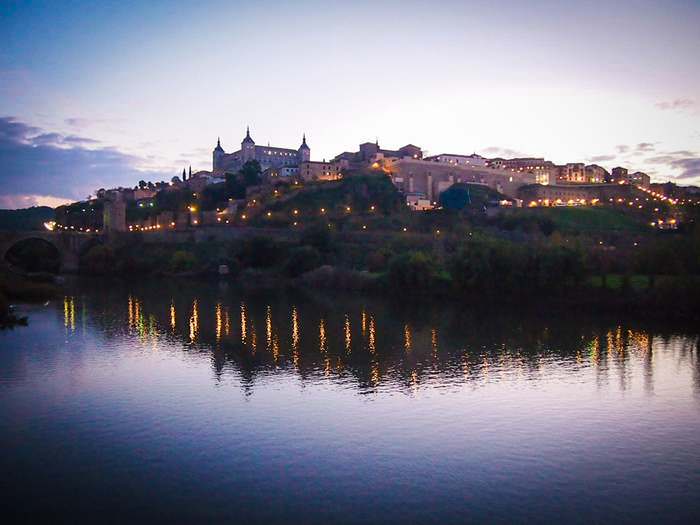 Because it’s so steeped in history, Toledo, Spain  was declared a World Heritage Site by UNESCO in 1986. Located a quick train ride south of Madrid, it makes for a perfect day trip when visiting Spain’s capital. Attractions, a few of which are listed below, are plentiful.

The Toledo Cathedral with Paintings by El Greco 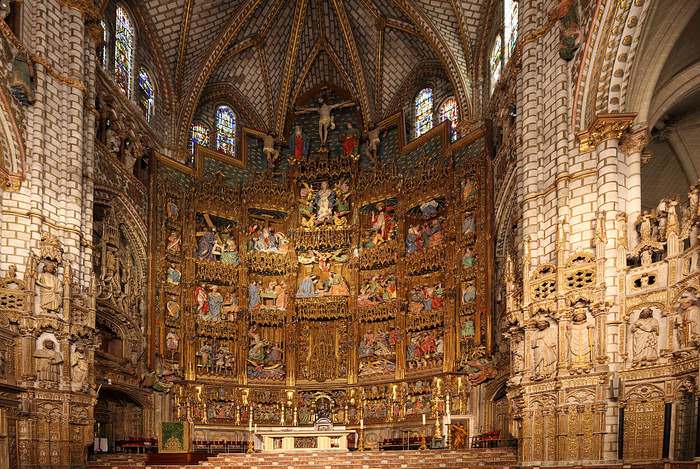 The Toledo Cathedral is one of the most striking Gothic cathedrals in Europe. This imposing building can be admired from the plaza right next to it or from afar, as the massive tower is a prominent feature in Toledo’s skyline. Highlights inside are the gorgeous high altar and two paintings by El Greco, who was based in the city. 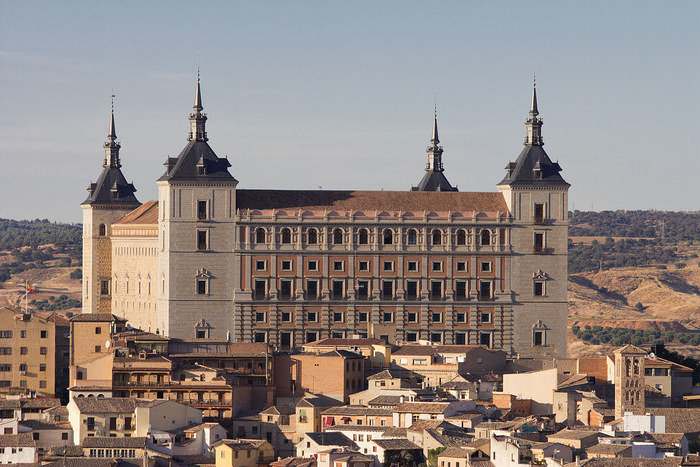 The Alcazar of Toledo rises above the city – Wikipedia

The Alcazar, an Arabicized Latin word that means palace-castle, is the second main attraction in this medieval city. This square fortification is made entirely of stone and is built on the highest point in the city. Its foundations date from Roman times, when it served as a palace. It was restored by Charles I, also known as Holy Roman Emperor Charles V, in the 16th century. After Hernan Cortes’ conquest of Central America, he was received by Charles I at the Alcazar. 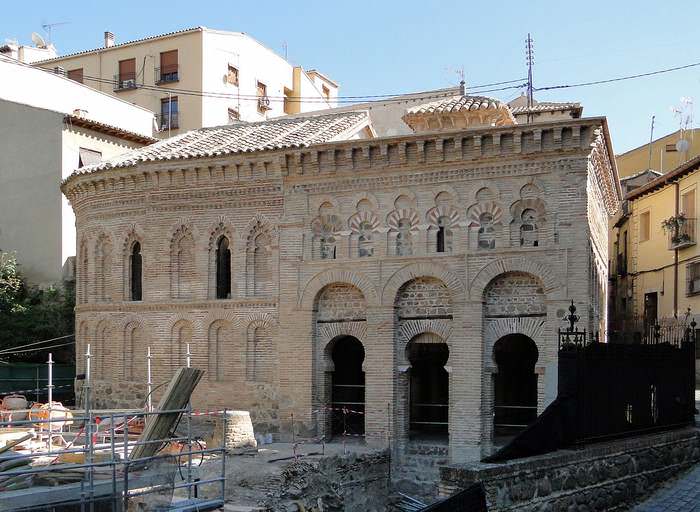 Restoration of the Mosque of Cristo de la Luz – Wikipedia

The only remaining of the ten mosques that once stood in Toledo, the Mosque of Cristo de la Luz still looks almost just like it did during Toledo’s Moorish period. This important historic treasure was built in 999 and is unique in the sense that it’s still in the same condition as when it was constructed, a testimony to the architectural skills of the Moors. 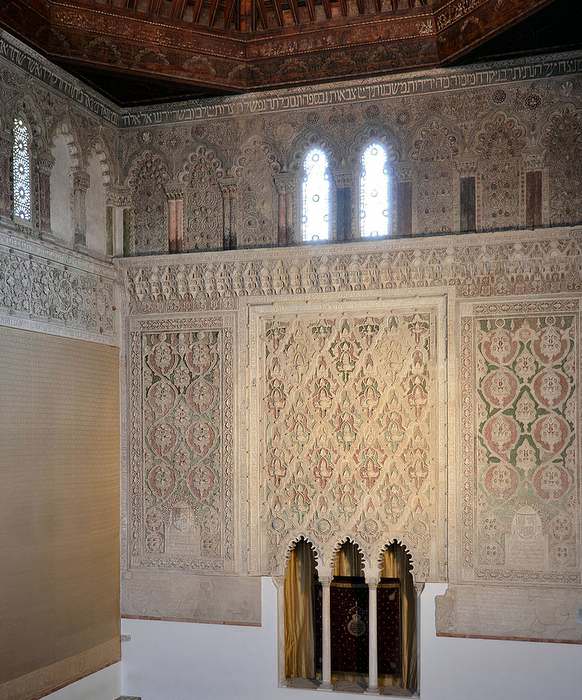 Interior of the Synagogue of El Transito – Wikipedia

The Synagogue of El Transito is famed for its stunning stucco decorations that resemble those in the Alcazar of Seville and Granada’s Alhambra. Another important religious building in the city, the Synagogue of El Transito dates from the 14th century and, after the banishment of the Jews from Spain, which was a consequence of the Black Death. It was subsequently converted to a Christian church and is now a museum.

Another former synagogue, Santa Maria la Blanca, is now the property of the Catholic Church. Built in the late-12th century, it is regarded as one of the oldest, existing synagogues in Europe. As its name implies, it is, indeed, white on the inside. The tower can be climbed and offers a superb view of the city, taking in both the Alcazar and the Toledo Cathedral. 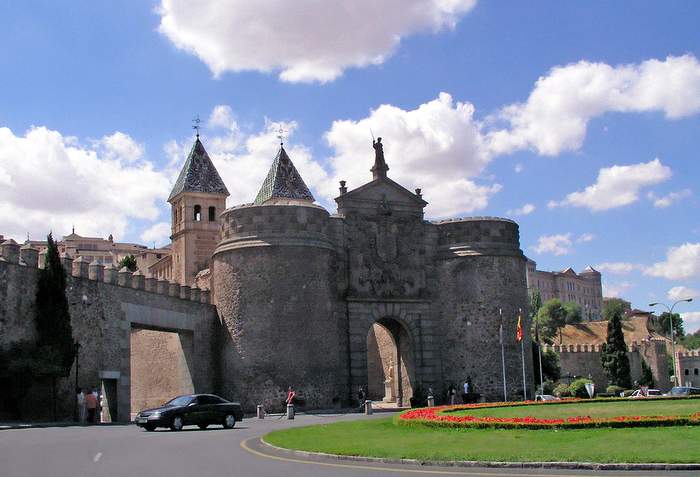 This impressive medieval city gate used to be the main port of access to the city. Of Moorish origin, the larger part of the Puerta de Bisagra Nueva was built later and dates from the mid-16th century. It’s one of the many historic sites that dot this overwhelmingly, ‘densely populated ’ old city.

Yet another historic landmark, the stone Puente de San Martin crosses the River Tagus. Both sides of the bridge are heavily fortified to protect this once wealthy city from attackers. The middle span length is 40 meters, which, when it was built in the late 1300s, was a marvelous architectural feat—not many bridges in the world spanned such a distance.

These are just a few examples of the historic sites that can be seen (and visited) in Toledo, Spain. We strongly suggest that you take your time to walk around, stroll the streets, sip a coffee on a terrace and visit some attractions. It’s a relatively compact city—it doesn’t take more than 45 minutes to cross it. The beauty, however, lies in the maze of alleyways, streets and corridors throughout the city center, as well as the incredible concentration of fascinating historic buildings. 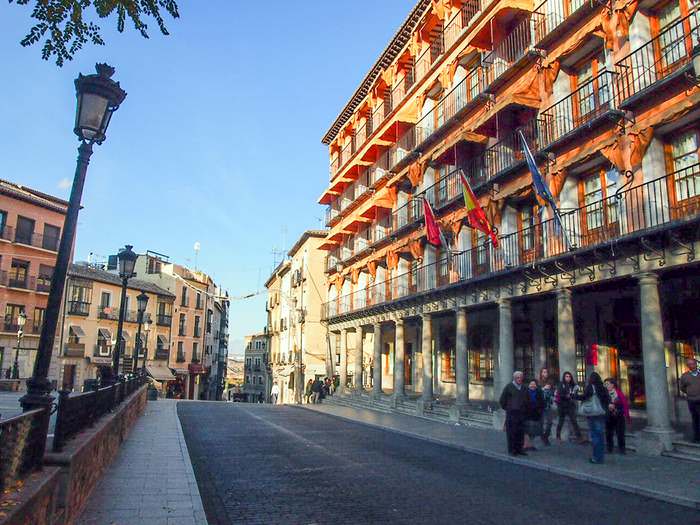 Beautiful Buildings in the City Center of Toledo

Toledo is world-renowned for its swords and blades. Toledo steel has been a wanted product since as early as 500 BC. It was, for instance, used by Hannibal during the Punic Wars and, afterwards, became the standard material for Roman weaponry. When walking around the city, you will still notice many sword and dagger stores. 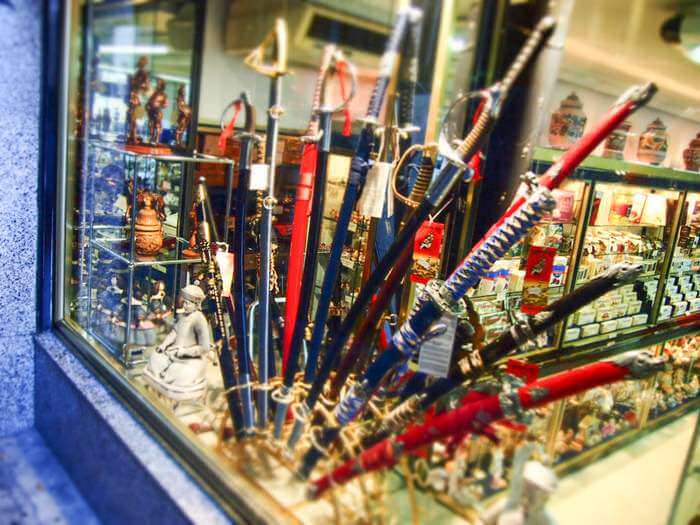 One of Many Sword Shops in Toledo

Toledo is cited in Cervantes’ novel Don Quixote. Don Quixote’s route ran through the city, a route that can be retraced along designated pathways. But, whatever type of attraction you prefer, Toledo, Spain is sure to fill the bill.

Written by and photos (unless otherwise noted) by guest contributor Bram Reusen for EuropeUpClose.com.
Bram Reusen is a freelance travel writer, translator and photographer from Belgium who currently lives in Vermont, USA. Bram’s preferred ways of traveling and getting around are hiking, cycling and road tripping. You can follow his adventures at  Travel-Experience-Live.