Wander the maze of narrow, crooked streets in Toledo, Spain, and you’ll find a cultural or historical marvel on almost every corner. Tourists, many on day trips from Madrid, come in throngs to see this UNESCO World Heritage City rising dramatically from the banks of the Tajo River. Toledo’s diverse architectural styles come from many changes over time as conquerors swooped in, including  the Moors. By the 13th century,  Muslims, Christians and Jews were living in harmony and Toledo prospered. But it didn’t last.  Some of the city’s history is grim and bloody, with the Inquisition in full force by the late 1400s.

First on the agenda for visitors is always the Toledo Cathedral (Catedral de Toledo. ) One of the great Gothic structures of Europe, it holds masterpieces by El Greco, stunning stained glass windows, carved silver and wooden sculptures, gleaming gold, marble, and alabaster, and numerous chapels filled with religious art and the tombs of cardinals.

Other churches are less splendid but have their own beauty, like the colorful Mudejar ceiling in San Juan de los Reyes; and the monastery’s cloisters, where John and I lingered in a patio fragrant with blossoms from a huge orange tree. Two former synagogues, dating from pre-Inquisition days when Jews lived freely in Toledo, have lovely arches and intricate stone tracery. Synagogue el Transito holds a museum of Jewish history in Spain, from the arrival of Jews in early Roman days through the Middle Ages to their expulsion in 1492. It’s a fascinating, if sorrowful, story. 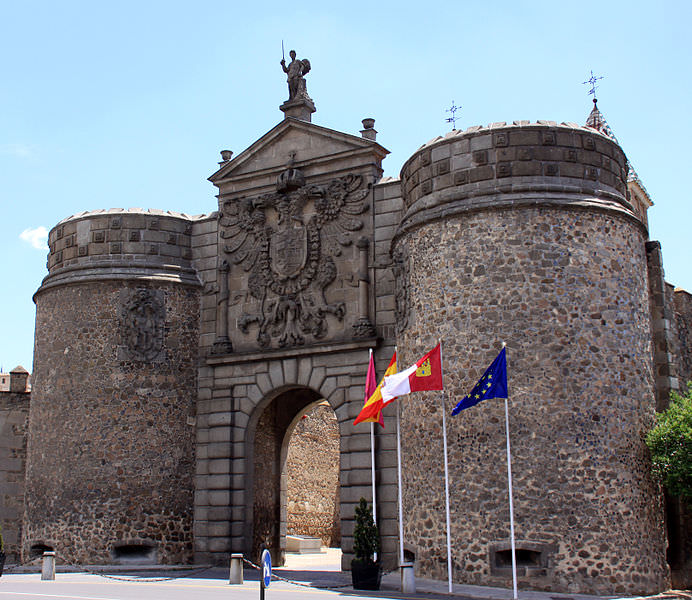 Toledo is the world’s main producer of damascene, designs of gold etched on iron or black steel. Every shop in the city sells damascene jewelry and artwork, much of it exquisite. You can ensure good, hand-made quality by going to a recommended studio or shop such as Artespana, on Samuel Levi Street next to the El Greco house. I didn’t get my earrings there, and am not sure what kind of quality I bought, but I cherish them, with their pretty, delicate patterns.

Our hotel, the Hostal del Cardenal, was a former archbishop’s summer home near the main gate to Toledo. The very pleasant hotel had 27 fairly small rooms, 18th-century furnishings, and an enchanting garden with a pool and fountains.  Rates were under 150 euros. The restaurant served Castilian specialties, such as suckling pig, indoors in winter and outside in warm weather. (Those who have trouble climbing stairs should be aware  that there are flights of stairs to the hotel entrance.)

The Hotel Santa Isabel, in the historic area near the cathedral, is an excellent value. It’s quiet and comfortable, has a courtyard and roof terrace, and costs under 100 euros a night.

Toledo is in the province of La Mancha, famous for its fictional character, the eccentric (or should I say quixotic?) Don Quixote. But it’s also famous for its wines; La Mancha is the largest wine-producing region in Spain, and maybe the world, with some 300 wineries and a lot of bodegas offering tastings.  White wines predominate. We enjoyed a light, crisp Airén with tapas, as well as the higher quality red Tempranillo, but there are scads of others to choose from. Typical foods of the area are pork, partridge, lamb, manchego cheese, and the ever-popular marzipan.

Toledo has one of the most ornate little train stations you’ll ever see. Built in 1919, its stained glass windows, high ceilings and colored tiles are in Mudejar style (a mixture of Spanish and Moorish).  We took the train to Madrid, and from there, picnic lunch in hand, rode the high-speed AVE train 2-1/2 hours to Seville. When is the USA going to get more trains like these? We passed smoothly and silently through rolling hills of farmland, olive orchards, and vineyards, toward Spain’s fourth largest city, Seville. 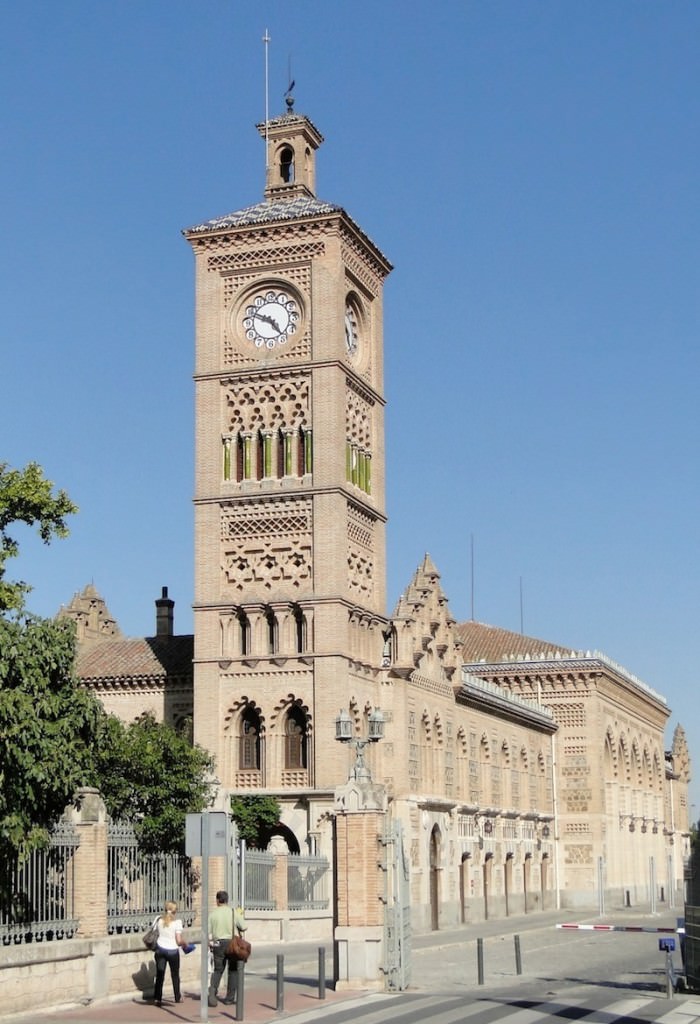 More travel information can be found at the official Spain tourism website.