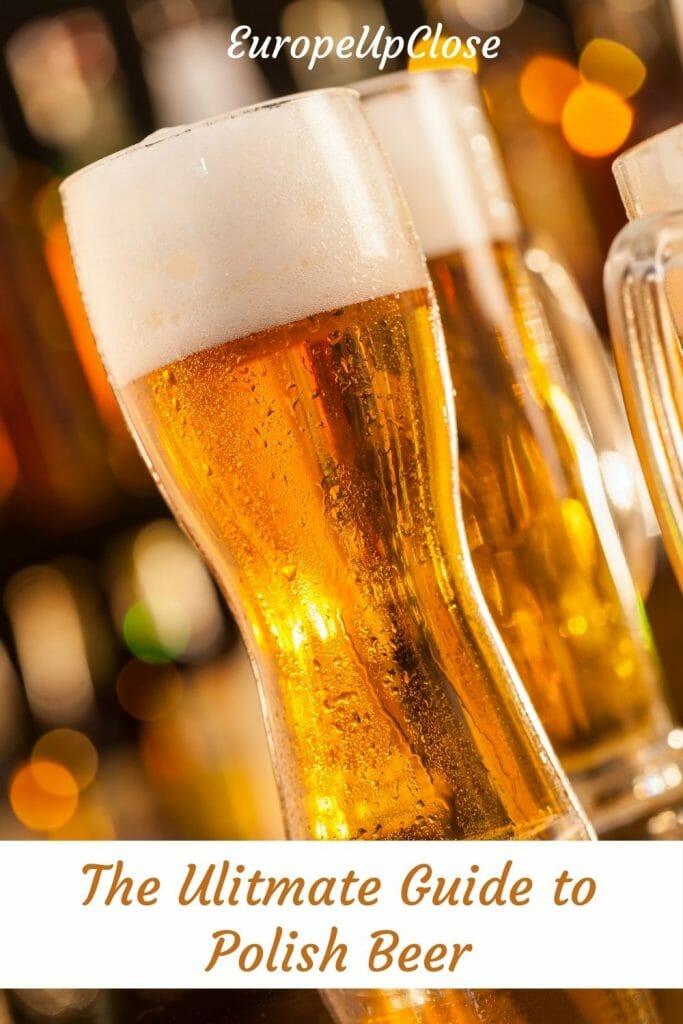 After a long day of seeing the sights in Krakow, there’s nothing better than drinking a culturally-relevant libation. Poland has a flourishing Craft Beer scene with many delicious brews. This Polish beer guide is designed to help you choose the best Polish beer during your vacation. While most people think that the drink of Poland is vodka, consumer surveys report that beer is the most popular drink. It definitely is favored among my Polish friends.

You can find most of Poland’s best beers in Krakow. During the summer, the cafes on Main Market Square are ideal for taking in the scene and a brew. I have seen traditional music followed by fire dancers performing night after night. In the winter, it’s time to stay inside, and Krakow offers quite a few toasty brewpubs.

A great place to drink beer in Krakow is C. K. Browar, a brewpub and nightclub located in Krakow’s city center. Krakow is also the right place to sample Baltic Porter, a style of porter that developed in the 1700s and is noted for its high alcohol content. Some of the best are Okocim Porter, Zywiec Porter, and Black Boss Porter.

Polish Beer – a tasty, but an unappreciated choice

The first thing to know is that beer is called piwo (pronounced pee-vo) in Poland. Poland is one of the largest producers of beer in Europe.

However, it doesn’t have a very good reputation. I personally don’t understand why. Perhaps it’s because Poland’s most common beers are pilsners, pale ales, and porters, and these beers are crafted in the European style (more specifically Germanic and English

For more about German beers, check out Michael Orr’s terrific article, A Guide to German Beer. Many Americans find European-style beers on the duller side when compared with our boisterous, American microbrews, but Polish beers simply achieve greatness in a different way: by focusing on balance.

A Short History of Polish Beer

Before the 19th Century, Polish brewers used a top-fermenting process to craft beer, as opposed to a bottom-fermentation. Porters and wheat beers are two common types of top-fermented beers.

When exporters discovered a demand for their beer in distant countries, they began to craft beers that held up better over time. This resulted in the popularization of bottom-fermentation, and Poland’s beers made with the top-fermentation process almost disappeared altogether.

These three companies make some of Poland’s best beer, including Zywiec, Okocim, and Tyskie. Since you’re going to be ordering these beers, why don’t we try pronouncing them. Zywiec is pronounced zhiv-ee-ets; okocim is pronounced o-ko-cheem; Tyskie is pronounced tis-kee. It’s always easier once you’ve tasted them.

Tyskie is a lager and one of my favorite beers in Poland. Other great Polish beers are Karmi (a porter), Zywe (the first Polish natural beer to be commended by the Slow Food Organization), BOSS Pils (this beer, made by Brower Witnica Brewery, is quite hoppy), Lech, Tatra, and ubr. If you purchase a beer that says “Mocne,” then you are holding an extra-strong beer in your hand. This extra-strong style is very popular in Poland, and many of the most popular beers in Poland are high-alcohol.

No Polish beer guide would be complete without mentioning piwo z sokiem and piwo grzane. Piwo z sokiem is a mixture of beer with fruit juice that is meant to be drunk with a straw. Raspberry, ginger, and black current juices are popular. The syrupy juice is actually a pretty interesting accompaniment.

Piwo grzane is only drunk in the winter. It is warmed-up beer flavored with honey, cinnamon, and cloves. I’ve never tried this latter concoction, but it sounds like mulled beer. Fun for the holidays? Maybe.
Have fun tasting!

Taste it! Try these Beer Tours in Poland!

Okacim was my beer of choice when I went

My wife and myself will be visiting Poland for the first time in Jan 2017 and we want to try the local beers and cuisine, many thanks for the info which will save us a lot of time in exploring Poland Regards Stuart & Jacqui

Piwo grzane is very much like mulled wine. Poland was the first place I've ever seen this. It is delicious on a cold wintery day I must say! Being less ABV than wine, it will not sneak up on you like mulled wine can! Piwo z sokiem I have not tried, nor do I plan on it!

[...] If you are totally new to Polish beers, I suggest you start with Mattie Bamman’s “A Guide to Polish Beer”  to get an idea of what the vast majority of Poles drink and to get your pronunciation up [...]