Sfogliatelle is the hard-to-pronounce name for a delicious filled pastry that is as Neopolitan as Neopolitan pizza. Food lovers in Naples might traverse the town, sampling from the most famous pasticcerias (pastry shops) and comparing the sweet fillings and flaky crusts.  But me? I first discovered sfogliatelle quite accidentally when I wandered into the café attached to the Napoli Centrale Train Station and ordered one of the sweet looking desserts in the case.  From that moment, though, I was hooked. 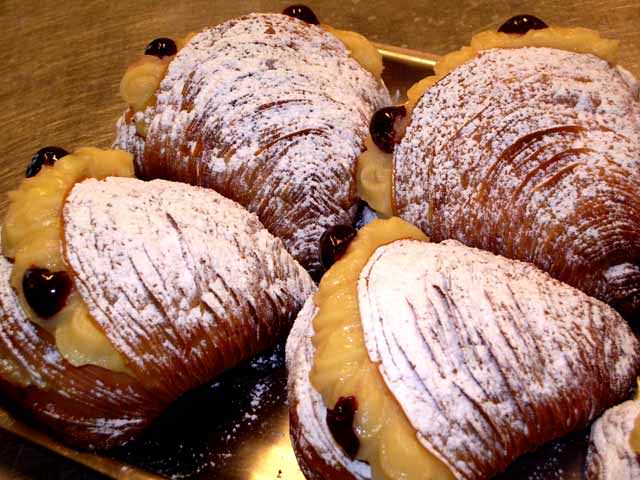 The name sfogliatelle derives from the Italian for “many leaves,” and is called that because the pastry shell, once baked, flakes to resemble a stack of leaves. This stack of light, flaky crust is stuffed with a sweetened filling. Regional specialties differ in the exact contents, but a traditional Naples sfogliatelle will most likely contain sweetened ricotta, semolina, cinnamon, eggs, and candied fruit. As if this weren’t sweet enough (although I am told traditional sfogliatelle are not overly sweet), most are then dusted with a thick layer of powdered sugar, so every flake of crust that spills off your chin will make a bright white spot on your table or lap.

The taste? It’s as though the best parts of a well-filled cannoli, warm croissant, and cheese Danish had blended in your mouth.

The classic sfogliatelle is called riccia (curly) and is often described as being the shape of a monk’s hood (vaguely crescent-like for those of us not familiar with the shape of a monk’s hood).  I tend to think they look more like seashells. Another common variation is the frollle (smooth), which has a less crispy pastry. Other variations include the Santa Rosa, filled with a custard cream and wild cherry syrup, and the Coda d’aragosta, named for mimicking the shape of a lobster’s tail, with a beignet inside filled with custard. 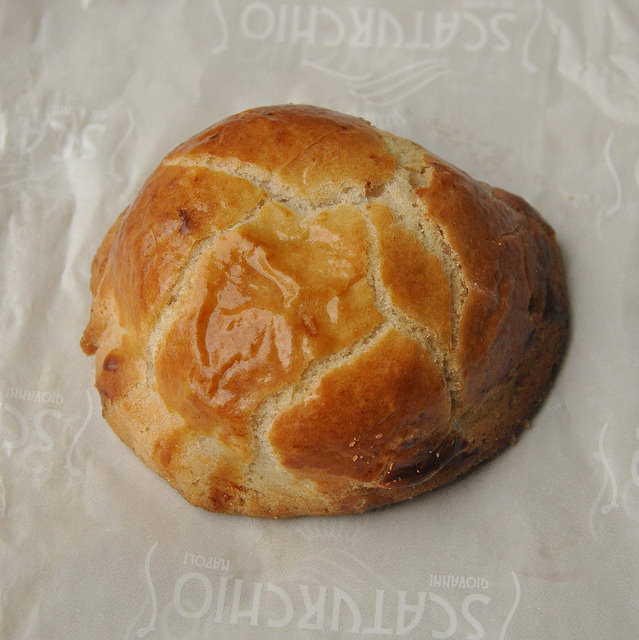 Riccia is generally acknowledged to be the original sfogliatelle variation, but the origins of sfogliatelle are a hotly contested issue. Although its exact birthplace is disputed (some say Naples, some say Salerno or the Amalfi Coast), all the tales agree that sfogliatelle began in a convent. Nuns experimenting with leftover dough and nearly-spoiled semolina were the first to create the pastry. Sfogliatelle proved to be so tasty that these nuns, sworn to a life of isolation, still managed to reveal the secret to the world.  And, we are grateful. 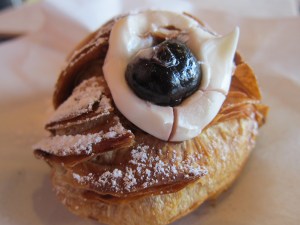 Sfogliatelle is meant to be eaten hot, straight out of the oven (look for signs advertising sfogliatelle calda). As a result, most pasticcerias bake all day long. Attanasio’s (which I visited for a second inspection of sfogliatelle at Vico Ferrovia 2/3/4) cooks a batch every ten minutes from 6:30 in the morning until 7 at night. Known for its sfogliatelle, Attanasio’s can be a busy place, so to get your fresh pastry, go to the cash register to pay and get a number, then watch the sign for your turn.

If you are in a hurry, there are several pasticcerias near the Central Train Station, including the notable Carraturo (via Garibaldi 59), but several other famous pasticcerias are dotted throughout the town, including the famous Scaturchio (Piazza San Domenico Maggiore 19) and Mazzaro (Palazzo Spinelli, Via Tribunali 359).

As a final note, sfoglliatella (with the a) is the singular term, a term which I find should be avoided unless used as “There’s only one sfogliatella left.”  I prefer the plural, as in “let’s get some sfogliatelle!”

On top of sfoglliatella, Naples holds amazing food tours throughout the city that not only include a stop at some of the best pizzerias in Naples and sweet treats but all the other authentic Italian dishes. So here are a couple:

Anne Siders is a foot-path traveler who delights in the off-beat, the ancient, and the active. She travels for work and for pleasure, and for the opportunity to write and photograph it all.

[...] Have you ever heard of sfogliatelle, the “hard-to-pronounce name for a delicious filled pastry that is as Neopolitan as Neopolitan pizza”? Read on and start salivating. [...]

I nearly thought you were going to write: "Sfogliatelle proved to be so tasty that these nuns SOON LEFT THE CONVENT AND OPENED A BUSINESS!"

And I too tend to think they look like seashells!

Um, wow! I could definitely eat a few of those right now! :)