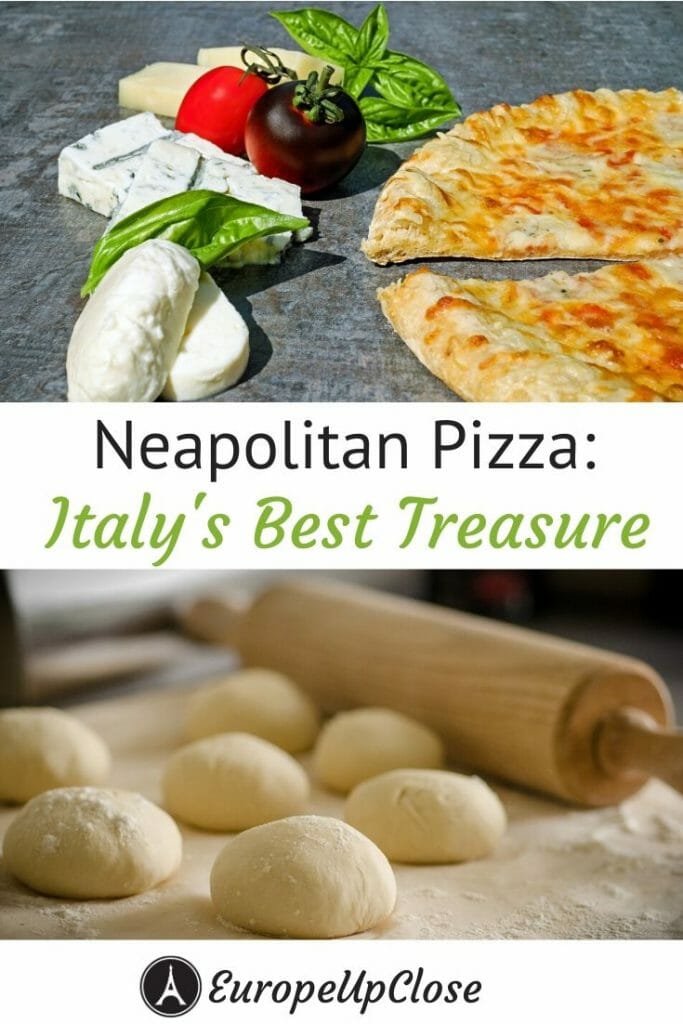 Pizza is widely considered the world’s favorite food and is served almost everywhere on the planet. Pizza lovers everywhere can thank Naples, Italy for introducing us to the Pizza. And Neapolitan pizza is taken very seriously.

The vibrant city of Naples, Southern Italy’s largest, is located two hours south of Rome. This bustling metropolis resides along the northern edge of the Bay of Naples, one of the most beautiful coastal stretches of Italy. With some of the world’s best opera and theater houses, Naples is also a conundrum of sorts.

While it seems to practice chaos on a daily basis, it’s also one of Italy’s most romantic cities. It also sports some of the best Southern Italian cuisine. But its greatest culinary treasure by far just happens to be pizza- Neapolitan pizza– unique, delectable, authentic, and unforgettable.

One wonders what makes this dish so amazing. Is it the semolina flour, the unique water, the seasoned wood-fired oven or the baker’s polished skills? Or is it dining in places surrounded by such enchanting beauty and fascinating history? And what makes it virtually impossible to replicate a true authentic Neapolitan pizza? After living in Naples for three years and having pizza all over the world, we can guarantee you won’t find it this good anywhere else. We’ve had it close, but never quite the same.

What Is Neapolitan Pizza?

Over the years there have been additional variations of the Neapolitan pizza that have grown in popularity in Naples and throughout Italy. This includes the Quattro Formaggi, Quattro Stagioni and Pizza Capricciosa.

Quattro Formaggi is a four-cheese pizza with fresh mozzarella, ricotta, gorgonzola, parmesan, garlic and oregano but no tomato sauce. Quattro Stagioni Pizza is divided in four separate sections each highlighting a season of the year. Artichoke represents spring, tomato and basil the summer, mushroom for autumn and olives and ham-prosciutto for winter. Pizza Capricciosa features mozzarella cheese, Italian baked ham, mushroom, artichoke and tomato. But in Naples, Italy, it’s the Marinara and the Margherita that reign supreme.

What Makes it an Authentic Neapolitan Pizza?

San Marzano tomatoes must be on the pizza to be authentic. They are grown in the rich volcanic soil in the shadow of Naples’ towering Mt. Vesuvius. These luscious tomatoes are known for their rich red color, tart flavor, firm pulp, low seed count and easily removable skin.

The mozzarella, too, is truly unique. Its actual Neapolitan name is Mozzarella di Bufala. It’s made not from cows but from the milk of the local water buffalo. Always rich and extremely fresh.

Genuine Neapolitan pizza dough consists of semolina wheat flour (type 0 or 00, or a mixture of both), natural Neapolitan yeast or brewer’s yeast, salt and water. They hand-knead the dough and after rising, pizza makers stretch it thin and skillfully hand-form it into a “perfect irregular circle” without the use of a rolling pin. The pizza shell must not exceed 35 cm in diameter and 33 mm thickness in the center.

First, swirling tomato sauces tops Neapolitan pizza. Then they woodfire it at 900 degrees F or 385 degrees C for a mere 60 to 120 seconds. When removed from the oven, the pizza is crisp on the bottom but slightly chewy on top. The crust edges should form a slight rim known as a cornizone with just tinges of a blackened edge. The cheese should be blistering, forming rises and falls on the surface of the pizza.

This culinary treasure is so authentic that Neapolitan pizza make the UNESCO’s list of intangible cultural heritage items (IHG). This honor bestows places or creations that are an integral part of its regional history and culture.

The word pizza was first documented in 997 A.D. in Gaeta, Italy. Known by the Romans as panis focacius, Focaccia flatbread was likely the precursor of pizza. In the late 18th century Naples, adding tomato to the bread helped develop modern pizza. Christopher Columbus introduced Europe to the tomato after discovering it in the Americas in 1492. Back then, it was common to believe that tomatoes were poisonous so they were mostly ornamental. Imagine that! What had Europe been missing all these years?

Initially in Naples, pizza started as food for the poor and the commoners, sold by street vendors and in its smaller restaurants. Rafaelle Esposito, a local tavern owner, created the Pizza Margherita that resembles with flag of Italy with its red, white, and green, ingredients. According to legend, Esposito got invited to the royal palace to prepare a pizza for Queen Margherita who was traveling to Naples with her husband Umberto I, King of Italy.

Esposito’s creation enamored the queen so much that she sent him a note of appreciation. Esposito in turn named his dish in honor of the Queen. Whether or not the legend is true, there’s no doubt that Pizza Margherita became one of the most recognizable symbols of Italian culture in the world. Naples continues to have a love affair with its most famous food.

For more on the overall history of pizza, check out this article here.

How to Eat Real Italian Pizza

Italians may speak with their hands, but they eat pizza with a knife and fork. American pizzas like New York pan and Chicago-style deep-dish pies are entirely different from their Neapolitan relative. The crunchy crust and moist wafer-thin body of the Neapolitan pizza makes it almost impossible to eat by hand. Eating by knife and fork is not only traditional, it is a must.

They don’t make real Italian pizza in large forms for sharing, either. It’s for the enjoyment of one person. It’s your time to be greedy!

Where to Eat Authentic Italian Pizza in Naples – Restaurant Recommendations

It seems that no matter where we’ve dined in Naples, the food is superb. And that especially goes for its pizza. With hundreds, perhaps even thousands of restaurants throughout the city and surrounding region, how do visitors know where to go for the best pizza? Though it’s almost impossible to go wrong, one of our rules of thumb while dining in Italy, is go where the locals go. After all, Naples is their home town and they know it best.

We’ve lived in Naples, return for visits, and stay in touch with friends currently living there. These are a few of the places to enjoy the best Neapolitan pizza experience. So we guarantee you’ll be dreaming about them long after you leave Italy!

If you had to choose one place in Naples to get authentic Italian pizza, it’s hands-down, L’Antica Pizzeria da Michele. The Condurro Family opened this historic pizzeria in the heart of the city back in 1870. Five generations later, the family still carries on the pizza-making tradition from Michele Condurro. He learned the art of pizza-making from the famous culinary school of Torre Annunziata.

Getting there early (at least 20 minutes before opening) is a must as the wait can be up to an hour at its busiest times. Michele is also the spot where Julia Roberts in the movie Eat, Pray, Love declared “I have a relationship with this pizza.”

However, there are only two pizza options here-the classic Margherita with cheese, tomato sauce and a single basil leaf and the cheeseless Mariana with a traditional tomato sauce flavored with garlic and oregano. The family still maintains that additional ingredients spoil the true taste of pizza. However, a word of warning here: One visit will never suffice. You’ll be back.

Founded in 1936 by Salvatore Di Matteo, much of their pizza business takes place right on the street though the pizzeria has full table service as well. Located on Naples magnificent Via De Tribunali, Pizzeria Di Matteo serves up the traditional Neapolitan pizzas as well as a favorite everyone raves about the Capricciosa. Its crispy prosciutto and briny artichokes combine wonderfully with the richness of the cheese and it’s simply unforgettable.

Pizzeria Dal Presidente is located in the heart of Spaccanapoli, the historic center of Naples. Ernesto and his brother had invited former U.S. President Bill Clinton. He was in Naples for the G7 Summit to taste his pizza along with their other Italian creations and he was very impressed.  Cacialli was honored, and proudly renamed the pizzeria Pizzeria Dal Presidente in 1944.

The locals love it and while the traditional pizzas like the Marinara and Margherita are still some of the most popular. Dal Presidente will make any kind of pizza you want.

For Gino Sorbillo his life has always been about pizza. The third-generation pizzaiolo (pizza maker) and his brother Antonio inherited the business from the original founders, their grandparents, Luigi Sorbillo and Carolina Esposito. Established in 1935, it was Naples first pizzeria on the Via dei Tribunali.

But it’s no wonder Antica Pizzeria Gino Sorbillo’s amazing offerings of both traditional and more creative pizzas have won numerous accolades and awards. This is another pizzeria that patrons should plan on arriving early to beat the crowds. It features a magical mix of old-time traditions and modern touches but their flavorful Margarita remains divine.

For more the Best Pizzarias in Naples, read these recommendations by another long-term Italy Expat who shares her favorite places.

On top of pizza, Naples holds amazing food tours throughout the city that not only include pizza but all the other authentic Italian dishes. So here are a couple:

La vita è bella. Life is beautiful. Even more so when enjoying an authentic Neapolitan pizza.