For young Italians, nothing says “That’s Amore!” quite like heavy metal – and the rest of the continent is locking onto the trend. Maybe it’s just me, but when I think metal, chains and padlocks, the first thing that comes to mind usually isn’t romance. But leave it to the Italians to take those three things, add a little destruction of public property, and turn it into true love. “Luccheti d’Amore”, as they call it. Or, much less poetically: “Padlocks of Love.” 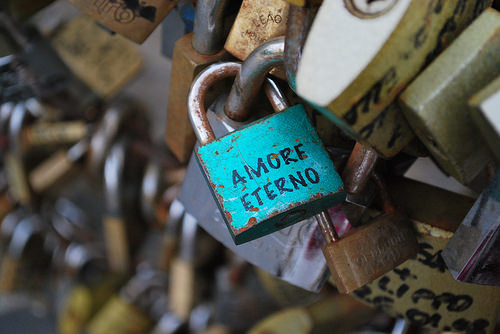 If you travel to Florence, you might notice padlocks hooked to a statue on the city’s most famous landmark, the Ponte Vecchio. If you walk the Via dell’Amore, between Riomaggiore and Manarola, in the Cinque Terre, you’ll see them attached to the spot where legendary lovers from those two towns used to meet. And if you continue on to Rome, Turin, Bologna or Bolzano, you’ll notice that couples across the country have taken to affixing padlocks to chain-link fences, bridges or statues, while throwing away the key to symbolically lock up their love.

It’s been happening quietly for years, beginning when soldiers going to war would leave locks on the road leading out of their hometown, as a promise to return. But the trend really caught on, and turned romantic in 2006, when a movie based upon the novel, Ho Voglia di Te (“I Want You”), was released in Italy and became as wildly popular as the movie Twilight in America. Luckily for their impressionable fans, the film’s young couple weren’t into sucking each other’s blood; their declarations of love were far more innocent. A scene where the couple writes their names on the top of a padlock attached to a lamp post with a chain, as they throw away the key, inspired scores of teenaged Italian romantics to do the same.

They started at the Ponte Milvio in Rome. Also known as the Milvian Bridge, it was built in 206 B.C. to commemorate Rome’s victory over Carthage the previous year. It was also the spot upon which Constantine had a vision of God that led to victory over his rivals, thus prompting him to declare Christianity the official religion of the Roman Empire. So what better place than this two-millennia-old, historically religious and military bridge, for tweens to lock their love into eternity?

They started to come from all over Rome, and then from all across the country. Soon, hordes of teens and other tourists began to crowd the bridge, street vendors started selling padlocks for five euros apiece, and the Tiber River below was having as much metal thrown into it as the Trevi Fountain.  When the lamp post finally buckled under the weight, the locks began to pile up on the bridge itself.

After only one year, these well-meaning romantics were doing what all the invaders of Rome over the last two thousand years were never able to do; they were destroying the bridge. A solution was needed to keep the bridge from becoming not only an aesthetic but also a structural, catastrophe. The Roman officials, not wanting to be seen as anti-romantics in the world’s most romantic country, decided to remove all of the locks and put them on display at City Hall. They then installed six new steel posts where the original lamppost once stood, surrounded by chains upon which padlocks could safely be hung. The tradition was kept alive if just a little sturdier.

Unlike the Romans, the city officials of Florence were not quite so sentimental. The padlocks didn’t suit the taste of the Florentines, who, to be fair, don’t slouch when it comes to aesthetics. They saw the locks as blights upon the statue of 16th-century sculptor Benvenuto Cellini, one of the city’s most artistic sons, on the city’s most beautiful bridge. They cursed the locks not only for their unsightliness but also for scratching and denting the metal of the magnificent statue. Rome could keep the teenagers and their scribbled-on, rusty old padlocks; the city that inspired the Renaissance was having none of it.

In 2006, they removed the nearly 6,000 locks that had accumulated on the statue. They barricaded the statute and ordered the police to fine anyone who attempted to attach another lock. But even now, the locks continue to go up faster than they can be taken down, and neither the barricades nor the fines have deterred the young lovers; they simply attach their locks to the barricades instead and pay 50 euros for the pleasure. 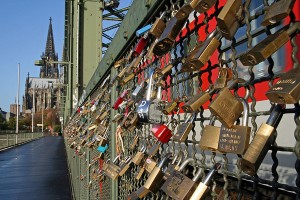 While the Italians have embraced the tradition of luccheti d’amore, they didn’t actually invent it. In fact, it was those other famous Casanovas who first locked up their love and threw away the key: the Chinese.

Thousands of locks can be found along sections of the Great Wall of China, and during wedding ceremonies held in those sacred spots, couples say their vows as they hang their lock in hopes that their marriage will last as long as the Great Wall.

The tradition caught on in Japan, Taiwan and South Korea, as well. And then it wafted like a whisper from one continent to another. Locks of love can now be found on mountains in Australia, along nature trails in Canada, and on fountains in Uruguay. In 2006, the town of Lovelock, Nevada was declared the American home to padlocks of love by the Nevada Commission of Tourism, who set up billboards and websites to encourage tourists to come and take part.

And in Europe, it’s not just the Italians who believe in them. The padlocks of love can be found in Hungary, Latvia, Sweden, France and Spain. All across the continent — on the bridges over Prague’s Vltava River, along London’s Tower Bridge, from the “Bridge of Love” in Serbia to the “Love Bridge” in Poland — the luccheti d’amore continue to appear, and even by all their other names, they are just as sweet.

Written by Andrea McDonald for EuropeUpClose.com

I had heard the locks were for secrets to be locked away. You whisper whatever it is into the lock and throw the key into the water to forever seal your sin/ secret away. Perhaps it is a different custom.

Please keep helping people understand how these locks are ruining great bridges and gates around Europe. It's such a shame.

Thanks for the story on the background of love locks. Two years ago my wife and I put ours up near the Lennon Wall on Kampa Island, Prague. It has since been buried under countless others but we still enjoy visiting the spot.

Nice article but do you know that actually the padlocks started? After the book and movie:  "3 Metri sopra il cielo" Three meters above the sky, everybody started copying the idea!

Those are some great finds. I went to Rome, Venice, Florence and Cinque Terre last summer. The ones in Cinque Terre are gorgeous.