The History of the Black Madonna

The Black Madonna has been a figure of mystery for centuries. Some say she’s simply a statue of the Virgin Mary carved from black wood, or perhaps has soot on her skin from the smoke of thousands of candles.  But speculation about the black woman goes much deeper than that.

Throughout Europe, especially in France, about 500 Black Madonnas, painted or carved in wood or stone, stand in Catholic churches, with a few in museums. Most date from the 11th to the 15th centuries.

These medieval images of the Virgin holding the Christ Child gaze benignly on their devotees, who come as pilgrims and associate them with miracles and healing.

Religious Origin of the Black Madonna

Many scholars say that the Black Madonna is a link to religions that existed long before Christianity. Her shrines are often in locations that were once pagan shrines to Diana, Artemis of Ephesus, Cybele, and other goddesses.

Some Black Madonna figures, statues or paintings look just like the Egyptian goddess Isis with her infant son Horus, showing the influence of old ways on changing faiths. Even further back than that, she may represent the archetypal Earth Mother, the ancient, eternal power of the feminine force.

She’s a fascinating figure. Whenever I travel in Europe, I seek her out, finding her in immense cathedrals and hidden crypts. Sometimes she and her son both wear golden crowns and are encased in elaborate brocade robes, with only their faces showing. Sometimes she’s a simple, dark figure, the color of fertile earth, wearing a plain gown and an expression of mercy. Always she conveys a sense of depth and mystery.

Here’s where you’ll find a few of the better-known Black Madonnas or Vierges Noires:

In the great cathedral in Chartres, 50 miles southwest of Paris, there are two Black Madonnas. Notre Dame de Pilar, a 16th-century copy of a figure from the 13th century, stands in her gown of gold in a side chapel of the cathedral. She perches regally atop a high pillar, surrounded by candles.

Notre Dame de Sous-Terre (“Our Lady of the Underground”) is tucked away in a crypt near a holy well that dates from pre-Christian days. During the French Revolution, the sculpture in the crypt was destroyed, and in 1856 a replica was sculpted.

Rocamadour is a town 100 miles north of Toulouse, set against a high cliff with spectacular views of the countryside. A long staircase rises from town to the church (there is also an elevator).

Pilgrims sometimes crawl up the 216 stairs on their knees to reach the Chapelle de Notre Dame, a separate chapel devoted to a lovely, carved Black Madonna. This shrine has been a sacred place of renown for centuries, credited with numerous miracles.

Le Puy-en-Velay, 274 miles south of Paris, is a charming town set on hills. Climbing one of those hills takes you to the Romanesque Cathédrale Notre Dame. The small Black Madonna is in the cathedral against a curtain backdrop, resplendent in her full golden robe, with only her face and the Christ Child’s showing. On August 15, the Assumption of Mary is celebrated by carrying the Black Madonna statue in a procession through town.

The Black Madonna of Einsiedeln is a Gothic wood carving that dates probably from the 15th century. Wearing a brocade robe and gold crown, she’s in a black marble chapel in the basilica of a Benedictine monastery. This Madonna has long been considered a shrine of healing; hundreds of thousands of pilgrims visit every year.

The elaborate, baroque abbey church is 20 miles southeast of Zurich. Every day, the Mass and Liturgy of the Hours are sung by the Benedictine monks in Gregorian chant. Near the abbey, a nativity scene said to be the world’s largest, holds some 500 wooden figures.

La Moreneta is a statue said to have been carved by St. Luke. The Lady of Montserrat was brought to Spain, hidden, and discovered in the 9th century and now stands in a basilica next to a monastery. This small Black Madonna is seated with the child on her lap.

If you get to the basilica at 1 pm you may hear one of Europe’s oldest and best-known boys’ choirs in their daily singing of the Montserrat hymn. A funicular and walking path lead up to the Holy Grotto, considered to be the site where La Moreneta was discovered. 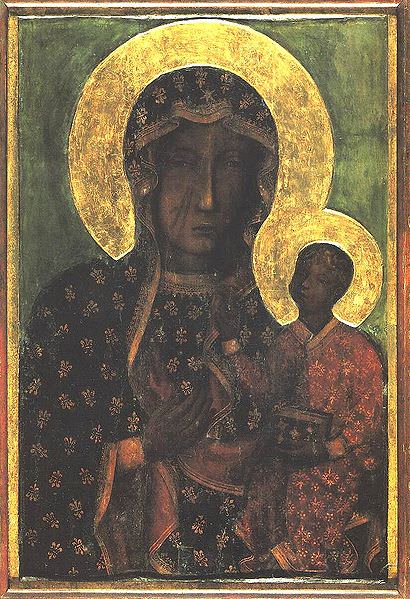 The painting of the black virgin “Queen of Poland” is hugely influential to Poles and a steady stream of visiting pilgrims. This is another icon traced to St. Luke, who is said to have painted it on a cypress table top (No wonder Luke is the patron saint of artists.)  It came to Poland in the 14th century.

This Black Madonna, with a mournful face, wears a robe with a design of lilies; Jesus is in a gold-trimmed red robe. Both have crowns. The national shrine is in a chapel attached to a baroque basilica on a hilltop in south-central Poland. A large Pauline monastery is a part of the sanctuary, run by the Pauline fathers who celebrated their 700th anniversary in 2010.

In 2016, the first Black Madonna was installed in the United States. The dark-skinned Madonna can be found in Ferguson, and she is a symbol against gun violence against African Americans in the US.

Black Madonna was written by Marilyn McFarlane for EuropeUpClose.com