Ötzi is Italy’s most famous mummy and has his own museum to prove it –the South Tyrol Museum of Archeology in Bolzano. One doesn’t normally associate Italy with mummies, but Ötzi — also known as the Ice Man — is exceptional and so is his story. 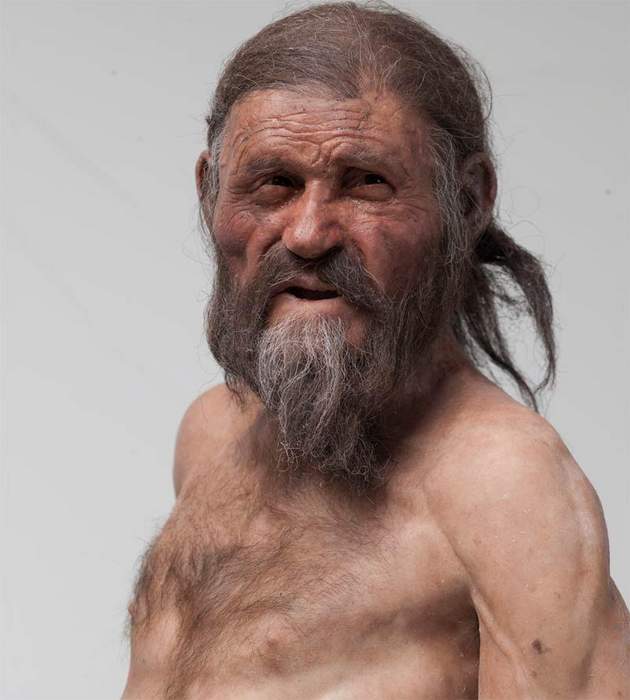 Ötzi , the ice Man is Italy’s most famous mummy

The Ice man emerged in September 1991, literally, when two tourists stumbled across a human corpse half frozen in the ground in the Ötztal Alps along the Italian-Austrian border. The location was about 60 kilometers from Bolzano, a gemütlich city in Italy’s South Tyrol (Alto Adige) in the northeastern part of the country. This discovery turned out to be one of the oldest mummies in the world, and a rare “wet mummy” because humidity can still be found in his cells. This characteristic makes him a rich source of information about ancient man, and a prime candidate for scientific research. 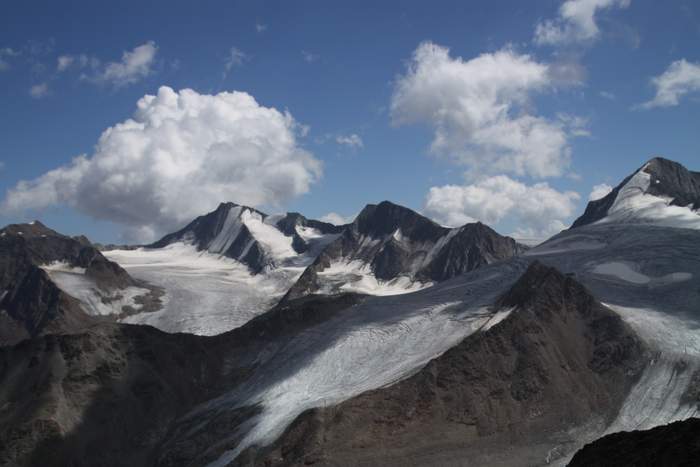 The nickname Ötzi originated with an Austrian journalist named Karl Wendl and is frequently used in German-speaking countries, but the English term “Ice man” has caught on internationally.

Both Austria and Italy fought for his remains. Each government sensed a lucrative tourist potential in the 5,200-year-old body buried beneath the snow, and a legal battle ensued. Italy “won” after a protracted court case, and the museum opened in 1998 specifically to house the mummy and the artifacts found near his incredibly well-preserved body. 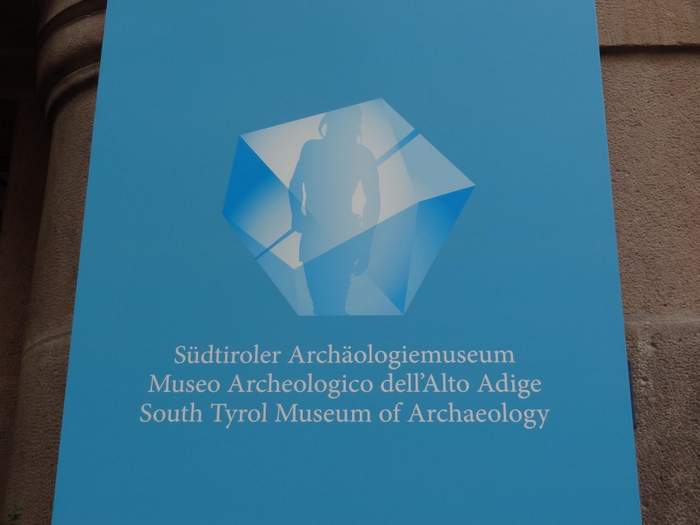 The logo of the museum outside the entrance.

Wherever he came from, the Ice man has been embraced by the town that claims him as its own. Although Bolzano has been welcoming tourists for hundreds of years (think: the beauty of the Dolomites, winter skiing, summer hiking, Germanic efficiency, Italian spontaneity), Ötzi’s “home” has become the focal point for tourism in the city, with more than a quarter million visitors in 2015. At year end 2015, more than 4.4 million people had visited him. 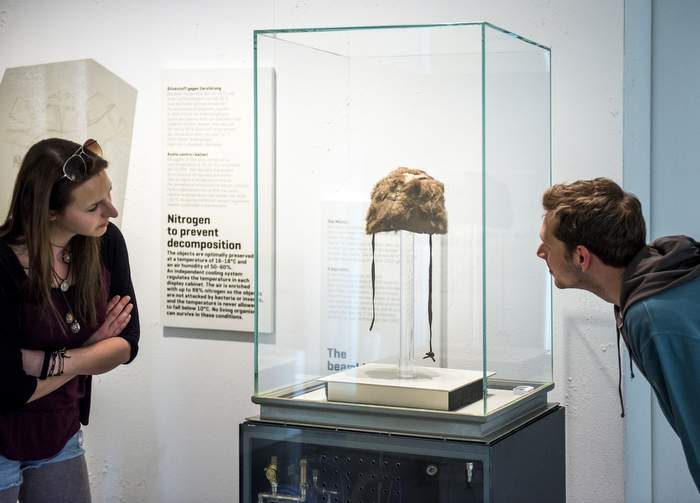 If you have an interest in archeology, a visit is heartily recommended. The same applies if you are traveling with children in tow, as many of the interactive displays are child-friendly. Your entrance fee gives you access to more than 10,700 square feet (1000 m² ) of exhibition space on four floors of a renovated structure in the center of Bolzano. They are well-designed and clearly marked in English, Italian, and German.

The top floor has a rotating series of displays; the lower floors focus on Ötzi, his personal belongings, and the mysteries surrounding his life and death. You will learn about life in this mountainous region five millennia ago, how the local inhabitants lived, what they ate, how they dressed, the diseases and other dangers threatening them.

One of the major questions surrounding the Ice man was how he died – whether he had been killed by an avalanche or frozen to death. Scientists were able to bring medical forensics to bear , since the nearby Regional Hospital of Bolzano has state-of-the-art imaging equipment. They discovered that he had actually bled to death. A computerized axial tomography scan (CAT scan) of Ötzi’s body revealed an arrow wound in the shoulder that caused fatal blood loss. A CAT finding also revealed that Ötzi anatomically resembles modern man rather than a primitive ancestor. 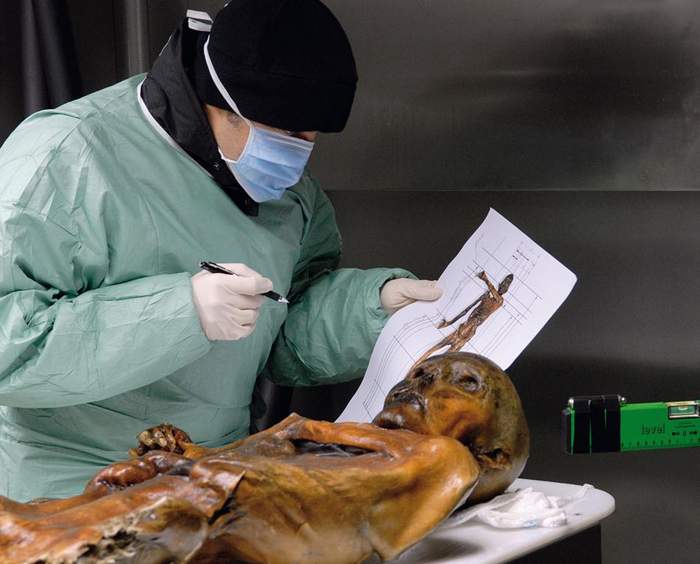 If you opt for a guided tour, you will learn that the age and physical state of the Ice man present unique challenges to radiologists. Because the mummy is maintained at a temperature of –6°C and a relative humidity of 98% in his chamber — in effect sheathed in ice — he must be “defrosted” before scanning. To hold this disruption to a minimum and to ensure that his skin does not dry out, scientists scan him rarely (only three times between 2001 and 2015), only for brief sessions, and only during winter months. As his left arm extends awkwardly across the front of his chest, Ötzi does not fit smoothly through the 78 cm. gantry of Bolzano Hospital’s largest scanner, and two passages are needed for a full body scan. Fortunately, the Ice man is not the type to complain.

He lies in a refrigerated chamber and is viewable through a small window from a darkened room, partly for conservation purposes and partly for ethical reasons (as a show of respect for the dead). The many photos, life-sized figures, and reproductions of him and his unusual tattoos and markings are more revealing than a quick glance at the actual body. 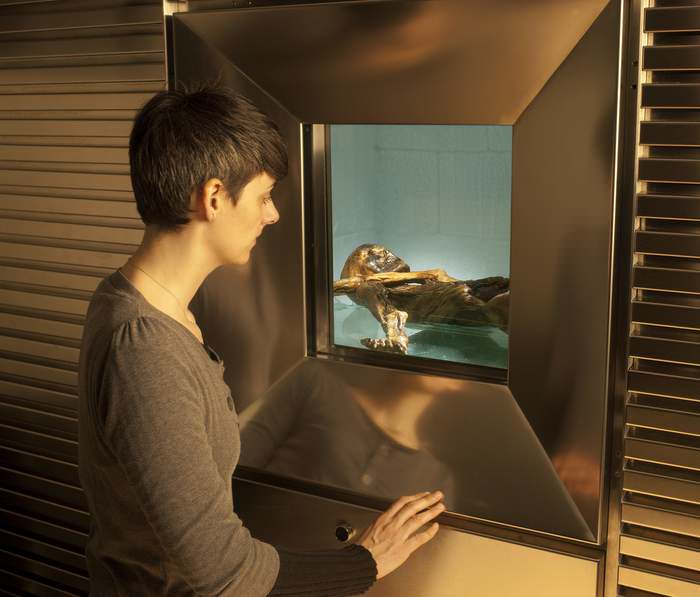 A museum visit will be significantly enhanced if you engage the services of a guide. This must be done by writing the museum in advance, specifying the date, time, number of guests, and language desired.

For information on the Ice Man, visit South Tyrol Museum of Archeology

Thanks for reminding me of this excellent museum. I've spent a lot of time of late in the other end of the country, but would like to get back to the South Tyrol. I visited this museum a few times a number of years ago on tours of the area. I didn't want to leave. The Ice Man is such an interesting character - from the details about the clothing to what was in his stomach and his lungs. Just amazing! And Bolzano's very nice, too!

Amazing! Riveting! Thanks for sharing thisgreat archaeological find...on my list for the next time I'm in Italy.

Glad you found his story as fascinating as I did. A glimpse into archeology, criminology, history, and medicine all in one well-organised space.