While pursuing my studies of French in my early twenties, one of the degrees I completed was a Diplôme de 2ième Degré (the equivalent of an associate’s degree) in French Studies from Université de Rennes 2. The city of Rennes has two main universities; Université de Rennes 1 offers courses in science, technology, medicine, philosophy, law, management and economics and Université de Rennes 2, is where one goes to take courses in the arts, literature, languages, communication, and social sciences. Although it took me a while to get used to the fact that many professors smoked Gaulois cigarettes while they lectured, and that my entire grade for a class was based on my performance during the 4-hour essay exam given at the end of the semester, I quickly fell in love with all that they city of Rennes had to offer.

Rennes, the capital of Bretagne (Brittany), is a diverse city that is essentially divided into two parts by the Vilaine river: the old city and the new city. North of the Vilaine you will find the charming old city, with its cobblestone streets and scads of traditional architecture from the 18th century (some older), traditional Bretonne crêperies, and charming squares featuring many of the cities most important buildings (the mayor’s office and the opera/theater, for example). 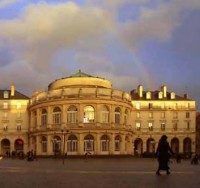 Cross the river and you’ll find the new city. I suggest a visit to Renne’s fine art museum, located on Quai Émile Zola (Émile Zola Quay) (on the banks of the Vilaine). The striking Les Champs Libres building (on the Esplanade Charles de Gaulle) is also worth a visit. Designed by urban French architect, Christian de Portzamparc, it houses the Musée de Bretagne (Museum of Brittany) the Bibliothèque de Rennes Métropole

(regional library), and the Espace des Sciences (a state of the art science center and planetarium. One of my favorite places to frequent on this side of town is Les Halles centrales, found at Place Honoré Commeurec. Built in 1922, this covered market is still bustling with vendors and clients. At the far end, some of the stalls have been converted into a contemporary art gallery, featuring unique pieces by regional artists.

While you’re in Rennes, you absolutely must try some of the local delicacies. Of course, it is easy to find some of the best crêpes (Bretagne’s culinary specialty) you’ve ever had at traditional crêperies throughout the city. Don’t forget to wash down a meal or two with some traditional Breton cidre (alcoholic cider). Another regional specialty is the far Breton, a custard/pudding cake (similar to a clafouti) with a dense, smooth, texture. Far Bretons are traditionally garnished with brandy-saturated prunes and raisins. The Bretons (inhabitants of Bretagne) eat it both for breakfast and for dessert.

And did I mention that, in general, the Bretons are some of the earthiest, loveliest Europeans I have ever met? While I was living there, I found it incredibly easy to strike up conversations in shops, cafés, museums… just about anywhere. As a result of the number of students who come to study at the two universities, Rennes is also a very international city. Thanks to the warmth of the Bretons and the fascinating international friends I made, though I was definitely an américaine in Rennes, I never felt like an étrangère (foreigner).

Love this article, as I'm about to visit rennes at the end of this month!