During a 3-day visit, I discovered that there is more to love about Bologna than its fabulous Bolognese sauce. While I was living near Nice, France, I frequently visited the webpage of the independent Utne Reader. It made me feel connected to my home state of Minnesota and kept me plugged into news and views in the U.S. during my time abroad. When they profiled Bologna as one of the world’s best cities to live in (thanks to its pedestrian walkways, bikes only zones, and highly-evolved social services) I decided it was time for a road trip.

Where to Stay in Bologna

Thirteen hours and dozens of cups of gas station Nescafé later, I found myself in one of the most environmentally (and foodie) friendly and most erudite cities in Italy. The city’s nicknames are La Dotta (“the learned one”- for its famed university), La Grassa (“the fat one”- for it’s cuisine), and La Rossa (“the red one”- a reference to the red rooftops throughout the city). The first thing all visitors to Bologna notice are the city’s numerous porticos (arcades), which make it possible to walk for long stretches completely protected from the elements, especially the hot summer sun. The Portico of San Luca, comprised of 666 porticos, is one of the longest in the world.

Bologna’s main square is Piazza Maggiore, which is surrounded by the majestic Palazzo dei Banchi, San Petronio Basilica, Palazzo dei Notai, and Palazzo d’Accursio. I recommend enjoying a glass of wine at one of the outdoor eateries and simply soaking up the ambiance in this unique spot where history, culture, and various styles of architecture come together gracefully.

The University of Bologna (founded in 1088) is the oldest existing university in all of Europe and is certainly one of the most respected. During the Middle Ages, scholars from all over Christendom flocked here to pursue their intellectual inquiries. The University now houses a vast collection of Medieval art and illuminated manuscripts from this period. Some of the University’s most famous students throughout history include Dante, Petrarch, Erasmus, and Guglielmo Marconi (who invented radio technology). 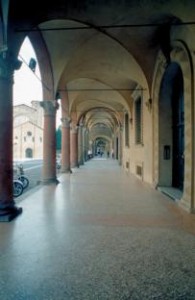 Today, the University’s 68 departments and 93 libraries are located throughout the city and on its four satellite campuses in the nearby cities of Cesena, Forlì, Ravenna, and Rimini. The University of Bologna remains one of the most respected and dynamic post-secondary educational institutions in Italy. Today, Bologna’s population is still greatly effected by the University- it grows from around 400,000 to over 500,000 when classes are in session. The University of Bologna attracts many Erasmus and Socrates (European scholar exchange programs) students and international students.

Of course, Bologna is also known for its culinary tradition. The famous Bolognese sauce is a meat-based pasta sauce with tomatoes and a touch of cream. In addition, the fabrication of cured pork meats (like prosciutto and salame) plays a large role in the local economy. Of course, being Italy, you will find notable vineyards nearby- including Lambrusco di Modena and Sangiovese di Romagna.

In short, Bologna is a must see on your next trip to Italy. The combination of the city’s breathtaking architecture, longstanding scholarly tradition, and tantalizing local cuisine is bound to stimulate both mind and body.

Not to be miss, a visit to the "Asinelli Tower" even though the steps to climb are almost a thousand!

Hi Jen, beautiful article! I just need to correct you about "la rossa" which refers more to the past ideas of communism which were share by its cityzens..