‘God created the world, but the Dutch created the Netherlands’, the old saying goes. Unique, idiosyncratic, functional and pretty – no more is the gloriously enchanting lifestyle of the Dutch on display than in the cosy cultural hub of Utrecht. 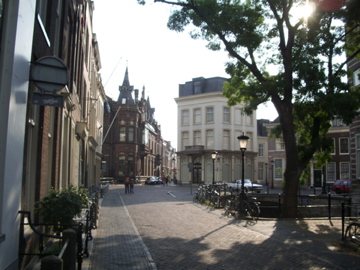 Located just one hour by train from the hash cafes and hedonism of Amsterdam, Utrecht is modest and leafy, where folk cycle on neat brick-clad streets and stroll along canals that ebb through the core of town.

Thanks to a friendly tip off from a friendly traveller, I discovered the discreet  ‘B and B Utrecht City Centre Hotel‘, a budget guesthouse run by a slightly eccentric, if not highly generous Dutch woman. The hostel provided free food to cook any time of the day and a music corner featuring twenty different musical instruments, including a grand piano. 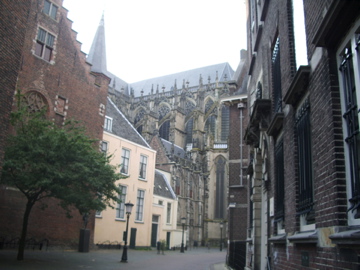 Clerical architecture in the old centre of Utrecht

From our unique accommodation, we took an explorative stroll under the glorious morning sun through the old town centre. Sunken canals curve and wind, with steps leading down to lower tiers housing cafes and commecial stalls right on the waterline. And lush parks and gardens line the tracks that never seem to end.

Once a fortified town of the Roman Empire, for centuries Utrecht was considered the most important town in Northern Holland and has continued to serve as the country’s religious centre since the 8th century. The ancient city centre displays a wealth of old clerical buildings and ornate places of worship, most prominently, the imposing 112-meter-high Dom Tower, part of the gothic Cathedral of St Martin where the town was originally founded. Many tourists climb the 460 steps to a magnificent view of the city and beyond. 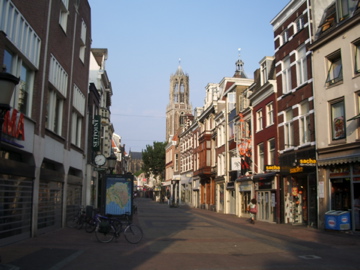 Utrecht straat on a sunny afternoon

Home of the University of Utrecht, today the town bustles with students and culture. Utrecht is positioned to become a European centre of culture in 2018, and is second only to Amsterdam in cultural vibrancy. For the museum and art aficionados, there is a multitude of fine galleries in Utrecht. Be sure to head down to the museum quarter – a locale featuring six impressive museums, particularly The Centraal Museum. An Australian so far from home, I was quite dazzled to find an Australian Aboriginal Art Museum located in the heart of town, testament to the city’s rich culture. 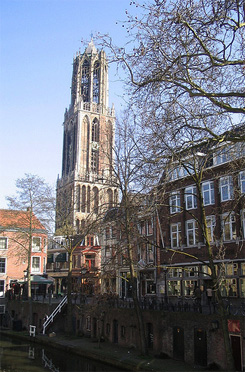 As the glorious Dutch evening fell upon Utrecht we hit the ‘Straats’ to explore the local nightlife. It’s hard to avoid a stretch of canal or street without a classy, inviting bar or café. ‘Stairway to Heaven’, ‘Café De Stad’ and Zotte Café De on Nobelstraat all proved enjoyable spots for a few rounds of Amstel.

Sitting in the shadow of Rotterdam and the Hague, we found that Utrecht really stands on its own. We were thoroughly impressed by the city’s unmistakable charming warmth, laissez-faire cosmopolitan atmosphere, promising ourselves we’d be back in good time to laze our days away under the stunning Utrecht sun.