Where “cooked water” is a culinary wonder – Tuscany Foods

The Maremma, Italy’s version of the Wild West, includes southern Tuscany and part of Lazio. Its famed cowboys, the butteri, herd cattle here, and the land not used for stock animals is dedicated to farmlands and vineyards.

Farmers and cowboys alike have big appetites and the cooking that has developed to satisfy them is likewise hearty and unpretentious. Let me introduce you to the typical Tuscany foods of the Etruscany region. 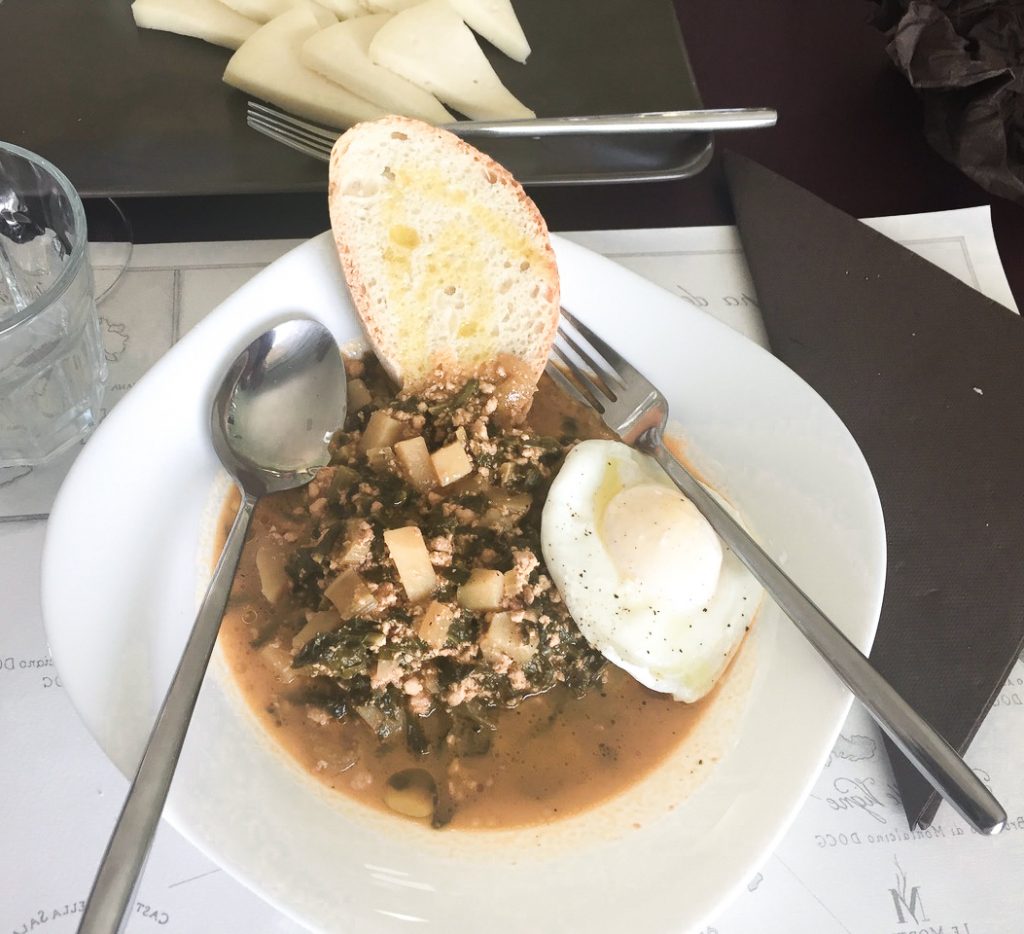 One of the most characteristic dishes is acqua cotta , which means “cooked water” in Italian.  It doesn’t sound appetizing, but once you have tried it, you will understand why it is a respectable addition to Italy’s culinary traditions.

Acqua cotta comes in many variations; think of it as a warm gazpacho with bread.  One version we sampled on a recent trip to Sorano, a small town in this part of the Maremma, included carrots, celery, red garlic, tomatoes, onions, egg, and of course bits of pane toscano, the ubiquitous unsalted Tuscan bread.  A variant on another day heavied up on the tomato and added fresh basil leaves.   All versions call for pecorino toscano (local pecorino cheese and local olive oil on the table, to add at will. 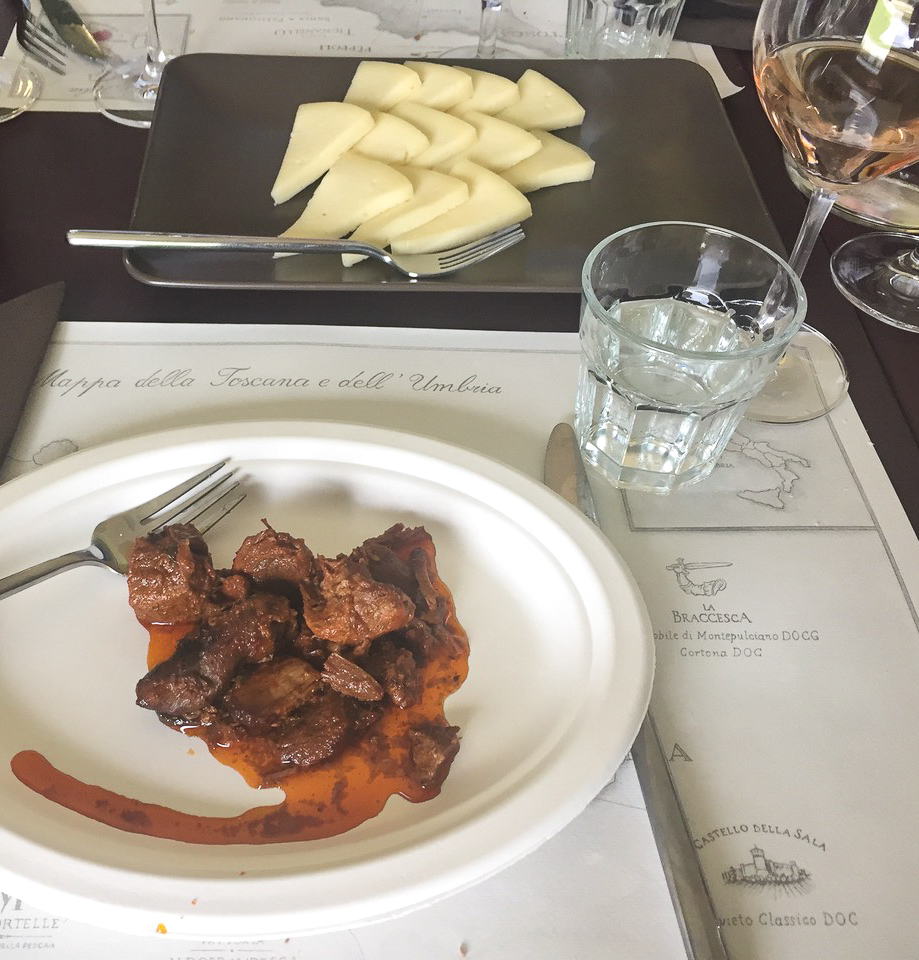 Another dish for which Sorano is famed is buglione, based on meat served in a concentrated tomato sauce over toasted bread.  The most typical meat is cinghiale, the wild boar found in abundance here, but lamb, rabbit, goat, or chicken may also be used.

As the ingredients are simple and basic – tomato concentrate, fresh garlic, fresh rosemary, a little white wine, a lot of olive oil, and a peperoncino (hot pepper) –  what makes the difference is the quality of those components, and the willingness of the cook to let them blend slowly into a thick and flavorful paste.

Potatoes here are often roasted, as they are all over Italy, but patate alla soranese are served with roasted fennel for an unexpected pairing. 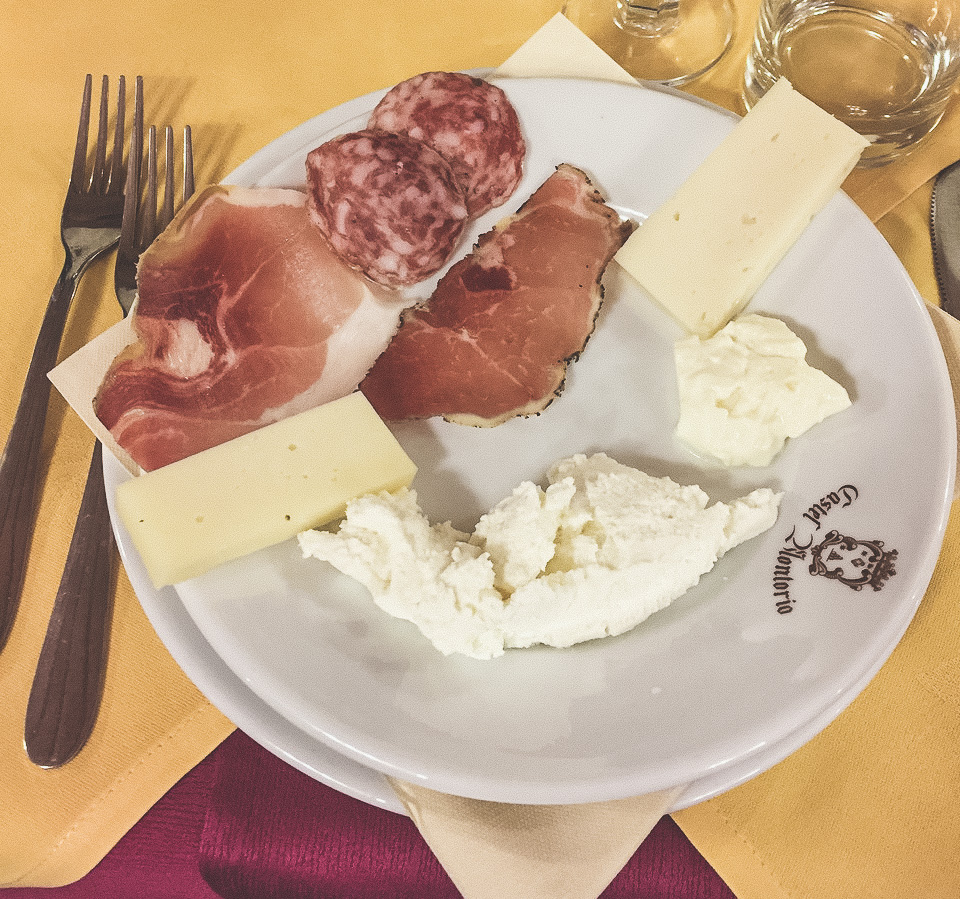 Tortelli (large ravioli) are also found country-wide, but the tortelli of Sorano have a surprise in store.   They are traditionally stuffed with local ricotta and pre-cooked spinach and can be accompanied by meat sauce or butter and sage, similar to their pasta counterparts in the north.  But you will also find them served with cinnamon and sugar as a first course, something you are unlikely to find elsewhere on the peninsula.

Pici are another local pasta.  They are like spaghetti but hand-rolled, therefore thicker and better able to hold the tomato and meat sauce with which they are normally served.

A dessert found nowhere else in Italy comes with an unusual name – sfratto, which means eviction.  The sweet is made of sturdy dough shaped like a club, filled with chopped nuts, honey, nutmeg, and other spices.  The shape suggests the clubs that medieval policemen used to knock on the doors of Jewish households, telling them they were being evicted from their homes and had to move into the ghetto. 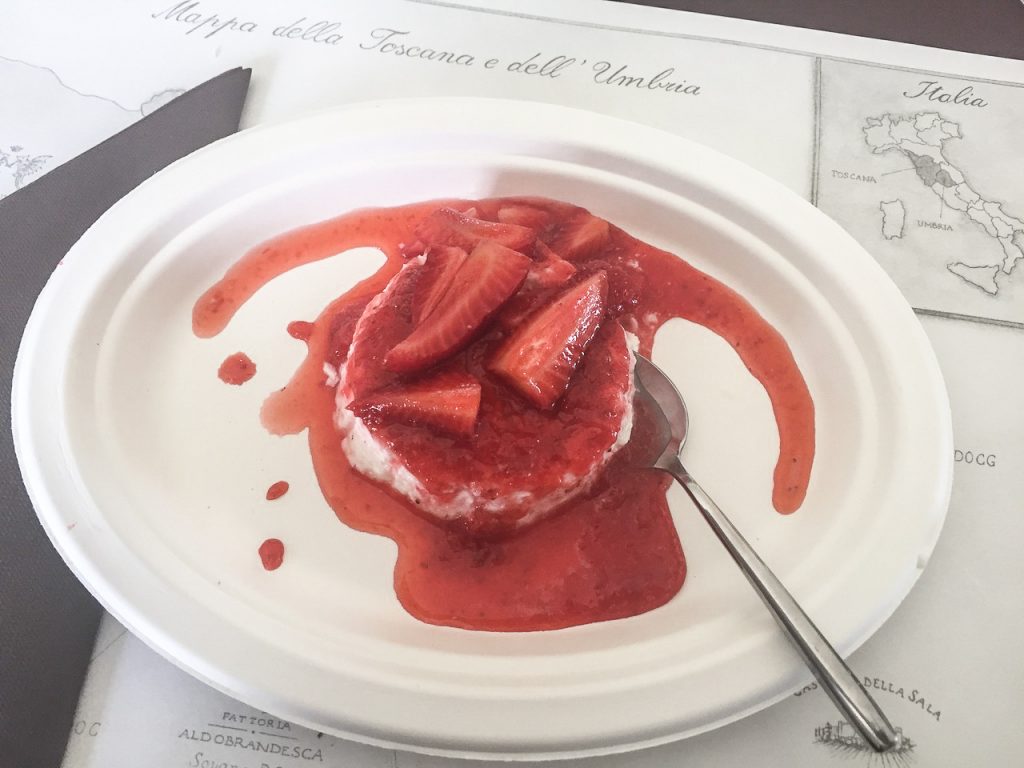 Zuppa di pane (bread soup) sounds about as appealing as eviction . . . or cooked water. But it is a classic soup, with as many variations as there are towns in Tuscany.  We sampled one with spinach, eggs, onions, and cabbage, plus – obviously – Tuscan bread.  The result was a satisfying rounded taste in the mouth, not starchy at all – a delight for vegetarians and not objectionable to carnivores either. 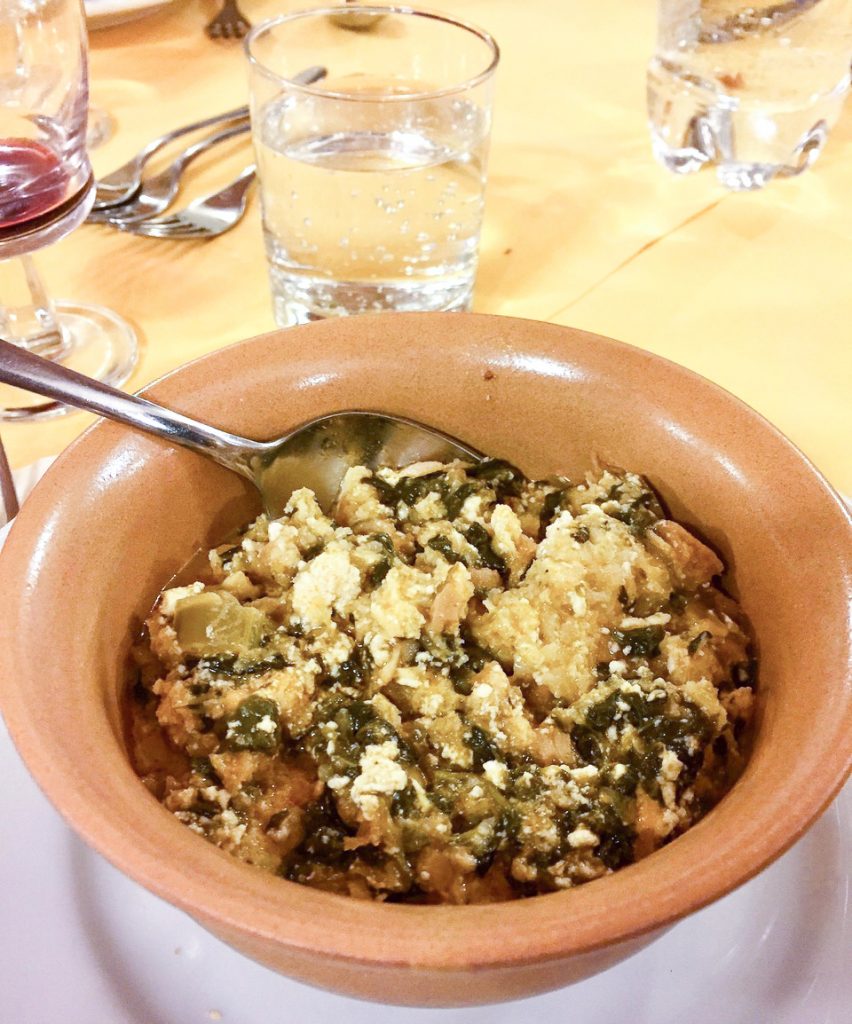 Panzanella is like a salad version of zuppa di pane.  It is made of bread and tomatoes, onions and capers, and whatever the cook fancies in a summer salad.  At Il Vecchio Fienile, a trattoria-agriturismo outside of Sorano, our panzanella included tuna, but not too much.  Which was fortunate, since that meal went on to include tagliatelle with two sauces (salciccia e funghi –sausage and mushrooms and sugo di anatra  –duck sauce), pici with tomato sauce, brasato (braised beef), barbabietola verde lessato (green boiled beets),  roast potatoes,  and crème caramel with cinnamon.  All that plus a credible house wine will cost between € 20-30.

If you are traveling in a group, you can order an excellent lunch ahead of time at the Antinori Vineyards in Sovana (Tenuta di Antinori at Fattoria Aldobrandesca in Sovana) .  As this is one of 12 vineyards owned by Antinori in Tuscany, make sure you are requesting the right place if you book in advance.

Lunch included cold cuts, focaccia, sandwiches, aquacotta with a poached egg on top, buglione di chinghiale with bread, ricotta with strawberries, and crostata di prugna (prune pie).   The setting was superb, and so were the four wines accompanying the meal:  a local white, Vie Cave (red), A (rosé), and Aleatico (dessert wine). 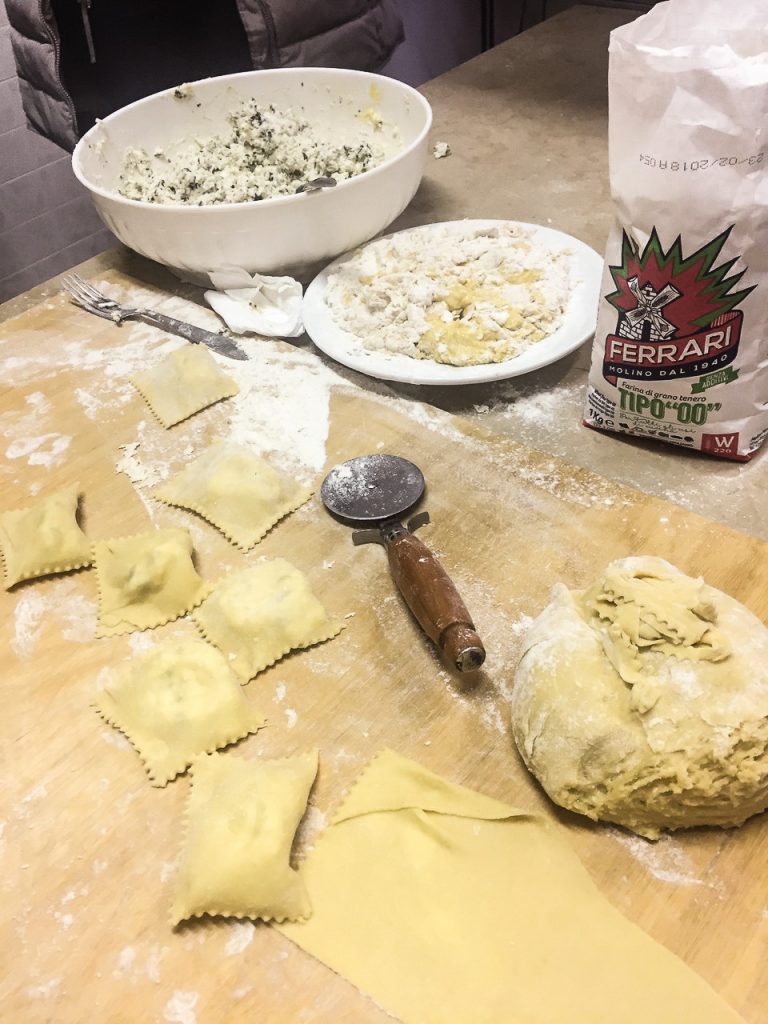 Such meals might inspire you to learn more about Tuscan cooking.  With advance notice, you can arrange for cooking lessons for a minimum of two people.  A local housewife known for her prowess in the kitchen will show you how to make tortelli, pici, acqua cotta, or other specialties.  You might gather at Castel Montorio, a former castle converted into residences, with a large communal kitchen.   After an hour or so of observation and preparation, you cook and eat what you have prepared.  The cost for two people is € 120.  Write to Tiziana at info@terredeltufo.com.

Did you miss part 1 and 2 of this short series on Etruscany? Click here to learn more and plan your trip to Southern Tuscany:

Hotels in the Etruscany region:

Where To Stay in Tuscany

Claudia Flisi wrote and photographed the article about Tuscany Food: Where “Cooked Water” is a Culinary Wonder for EuropeUpClose.com. 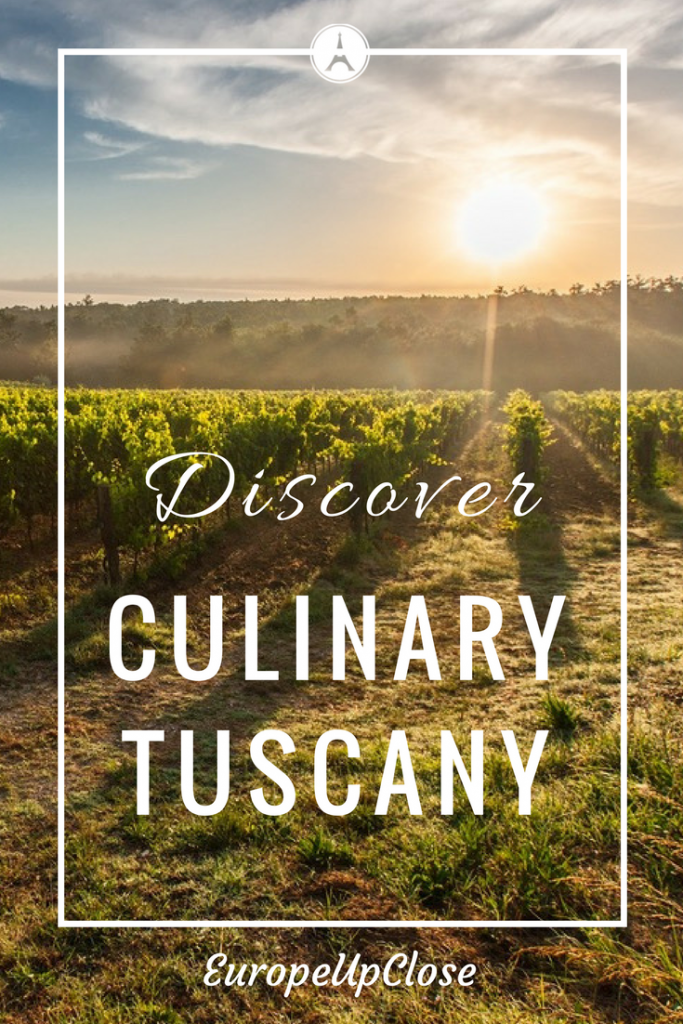