Whatever your reasons for visiting Tuscany, eventually you will wind up at table. For many, the foods of Tuscany are enough to make the trip: a combination of simple ingredients with an emphasis on locally-grown vegetables and beans, a few favored herbs (including sage, rosemary, thyme, and basil), meat and fish cooked without sauces, chewy unsalted bread, and above all – and below all – the region’s own EVO (extra virgin olive oil), low in acidity and decisive in taste.

On a recent visit to Tuscany, I dined in several celebrated eateries of Arezzo province – the Michelin-starred elegance of Il Falconiere in San Martino a Bocena, the rustic chic of Locanda del Molino in Montanara di Cortona, and Bottega Baracchi, the wine bar/bistro in Cortona itself. I also had the opportunity to take a cooking lesson with Silvia Regi Baracchi, the Michelin-starred chef who oversees all of these. 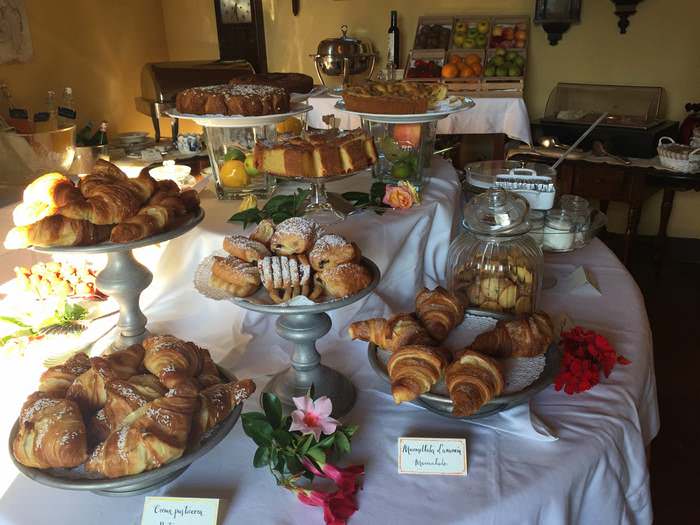 Breakfast at Il Falconiere — everything tasted even better than it looked.

Chef Silvia’s parents were restaurateurs in Cortona, and her classes at the family-owned resort, Il Falconiere, reflect her respect for the traditional foods of Tuscany. Our culinary assignments on a recent afternoon were pici and pomo d’oro. Pici are like thick spaghetti, made of water, flour, and a pinch of salt. The trick lies in the technique of hand-rolling them consistently to the proper length and thickness. They were accompanied by a simple tomato sauce enriched with fresh herbs, sautéed local pepper and garlic, and a dusting of Pecorino Toscano before serving. 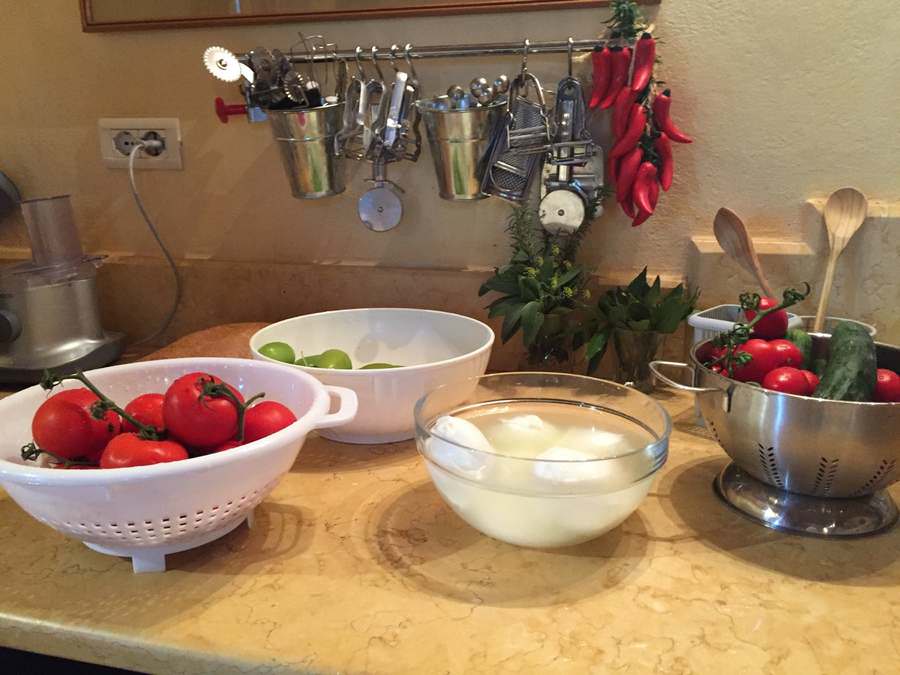 Colors bright enough for a painting, much less a kitchen.

The pomo d’oro is a play on words. Pomodoro is the Italian word for tomato, while pomo d’oro means “the golden apple”. Silvia revisits the time-honored insalata caprese (sliced tomatoes with mozzarella on top) by hollowing out peeled fresh whole tomatoes and stuffing them with cubes of mozzarella, EVO, fresh basil, and a sprinkle of creativity. Our class then had a contest to see whose presentation of the plate was most convincing, using tomatoes and other garnishes. 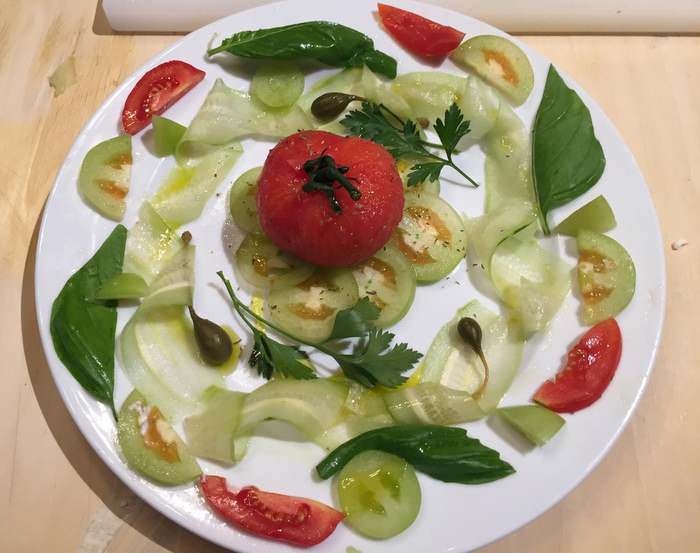 How to decorate a reinvented insalata caprese?

Our efforts were lubricated by glasses of wine from the Baracchi Vineyards. A bowl of cantucci provided a sugar charge. This was Silvia’s version of the classic Tuscan biscuit  — lighter, crunchier, and more cookie-like than the dry industrial version sold in gourmet stores.

With all the testing and sipping, we didn’t have an appetite at dinnertime, but we did our best at La Falconiere’s restaurant. That evening we were served our pici and pomo d’oro and were startled at how good they were, tarted up on elegant plates and served with aplomb. Even inexpert hands can’t ruin quality ingredients.

For a secondo, I ordered tonno in crosta di olive nere e timo, cipolla arrostita, pomodori verdi, e succo di prezzemolo (tuna in olive crust with thyme, roast onion, green tomatoes, and parsley juice). Yes, it was as good as it sounds. Officially I had no room for dessert, but no mind. EVERY table is given a plate of mignardises at dessert time; who can resist multiple mini-cups of different-flavored custards, crèmes, cookies, and confections? 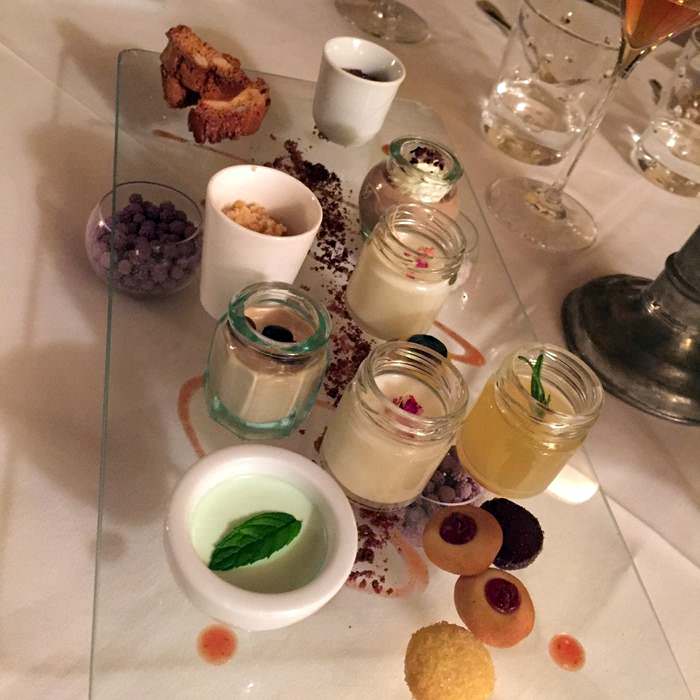 The assorted mignardises tray at Il Falconiere drove me crazy with desire.

Another evening at the restaurant an amuse-bouche of eggplant led to my choice of “funghetto” as a main course – stuffed eggplant paired with porcini mushrooms, candied tomatoes and puree of sweet garlic. That choice was from a seasonal menu based on mushrooms. My pasta was ravioli, conceived as two huge moons of pasta stuffed with redfish, sardine “pesto” and a sweet pepper sauce. Carnivores gravitated to a specialty menu, “dalla stalle alle stelle”  (from the stable to the stars), dedicated to Chianina beef, as prized to Italians as Kobe is to the Japanese. 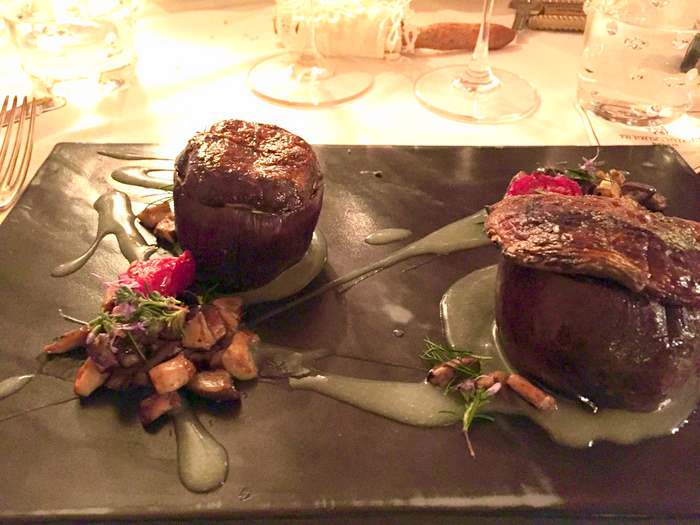 At Il Falconiere, “il Funghetto” is eggplant as well as porcini mushrooms.

The most popular dessert at our table was strawberries reconceived as fresh fruit, coulis, and sorbet, with a ring of white meringue. I opted for a piña colada revisited, with coconut crème and caramelized pineapple. Plus that irresistible tray of mignardises. A selection of three or more fresh-baked breads accompany all meals, plus the Baracchi’s own EVO. 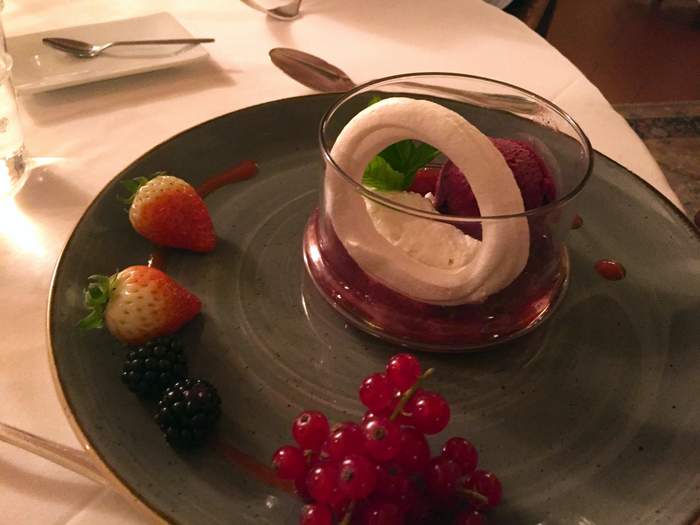 The dining experience at La Locanda del Molino in Montanari of Cortona parallels that of Il Falconiere in its respect for quality local foods of Tuscany and its traditions. But everything else is different. This former mill had been a dance hall and then a restaurant owned by Silvia’s family. She and her husband took it over in 2009, renovated it, added eight bedrooms, kept the stone walls and homey fireplace. In summer months, guests can dine outdoors on the terrace overlooking the mill wheel.

The atmosphere is warm and inviting. So is the food. We began with gnudi (meaning “nude” in dialect), named because it is like naked ravioli without the pasta. Ours were made with ricotta and ortica (local nettles), flour, eggs, butter, and sage, punctuated with a sauce of fresh tomatoes.  Tagliatelle incorporated rape (turnips) and cream, and came with a generous overlay of local truffles. 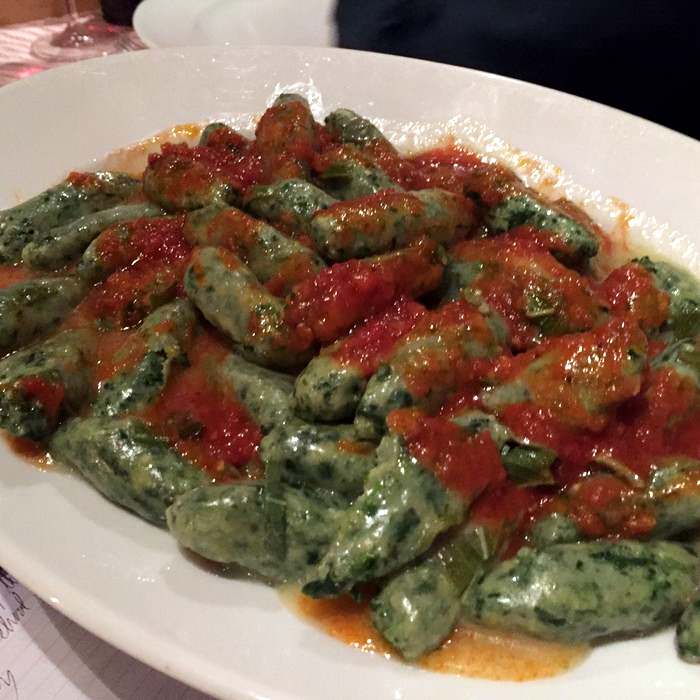 Gnudi in all their naked glory at La Locanda del Molino.

The rest of the meal was served family style, a groaning board of temptations including fried rabbit, fried chicken, baccala (dried cod in a cream sauce), fritto misto (tomatoes, onions, eggplant, zucchini), baked onions, and potatoes cooked in ashes for a distinctive smoky flavor.

The only stumble was the costata (ribeye steak), a Tuscan landmark dish. It hadn’t been aged properly and Riccardo Baracchi was furious with his supplier. We regretted only that we couldn’t make good use of the caper and anchovy sauce prepared specifically for the beef. Dessert consisted of three traditional dishes — zuppa inglese, tiramisu, and crostate (fruit pies). 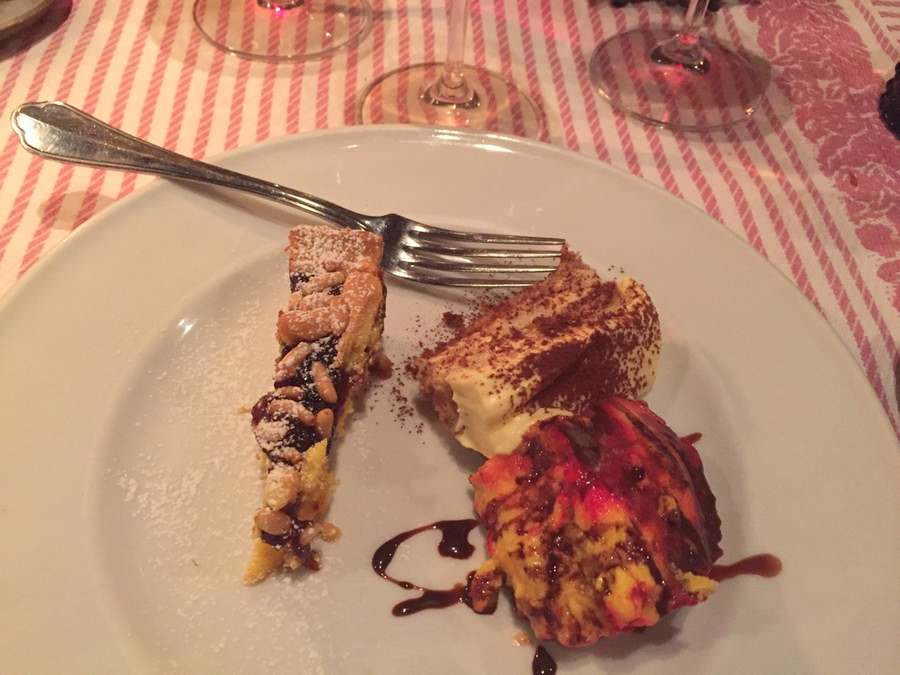 A trio of traditional desserts at La Locanda del Molino.

After meals like these, you may think you will never want to eat again. But after a tour of Cortona on foot, inexplicably you feel hungry. The Baracchi family took over what is now Bottega Baracchi Vino e Cibo in 2013, with this situation in mind. “When our clients from elsewhere come to Cortona for the day, our staff here can be of service,” explains Riccardo Baracchi. 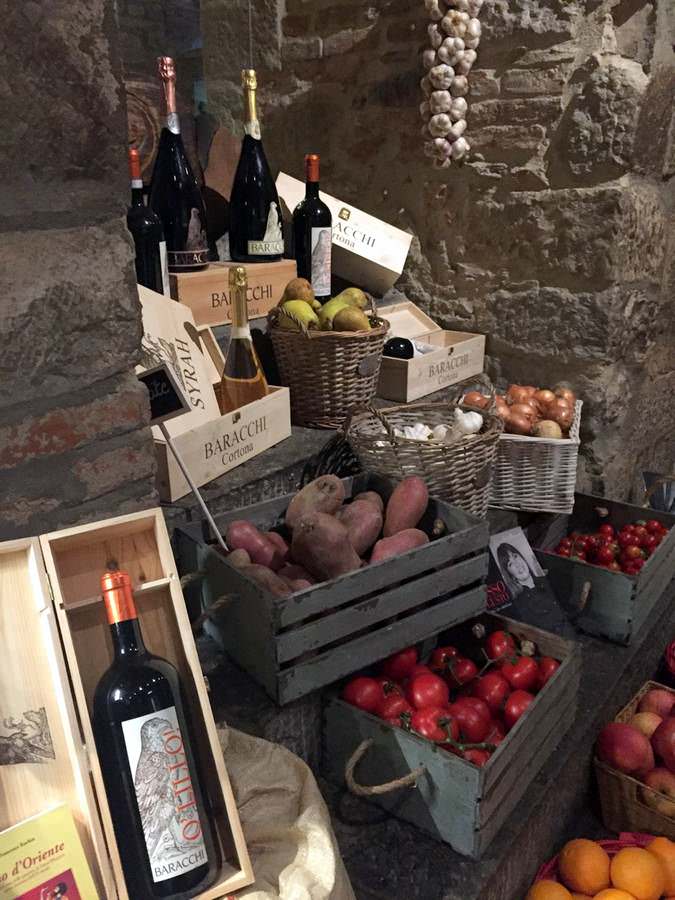 The inviting atmosphere at Bottega Baracchi in Cortona.

Because of its central location, the Bottega depends on good management, good food, prompt service, and affordable prices. The menu suggests that the Baracchi have been successful without dumbing down their offerings.

You can request a plate of sliced cold cuts, salumi, or cheese (all local of course), osteria-style. Or enjoy  bistro snacks that are either traditional (rosemary-flavored pears with pecorino) or exotic (fried shrimp with coconut sauce). A “proper” meal of soup or pasta and meat or fish can also be ordered. I wanted a simple chicken salad; the greens sparkled, the meat was moist, and the EVO made it all taste better. The hamburger and beef tartar both have Tuscan accents, as they are made with Chianina beef.

By the time you roll away from Tuscany’s table at the end of your stay, you might find yourself dropping “c’s” as easily as the locals do.

Where To Stay in Tuscany – Cutest Tuscan Towns and Best Hotels