The Cinque Terre “used to be a series of fishing villages, but we weren’t founded by fishermen. We are known for our beautiful landscapes, but we have more to offer than a pretty postcard. Tourism increased in 2015 by more than 30%, so we don’t need more visitors, but we want those who come to stay longer and learn more about our five lands.” 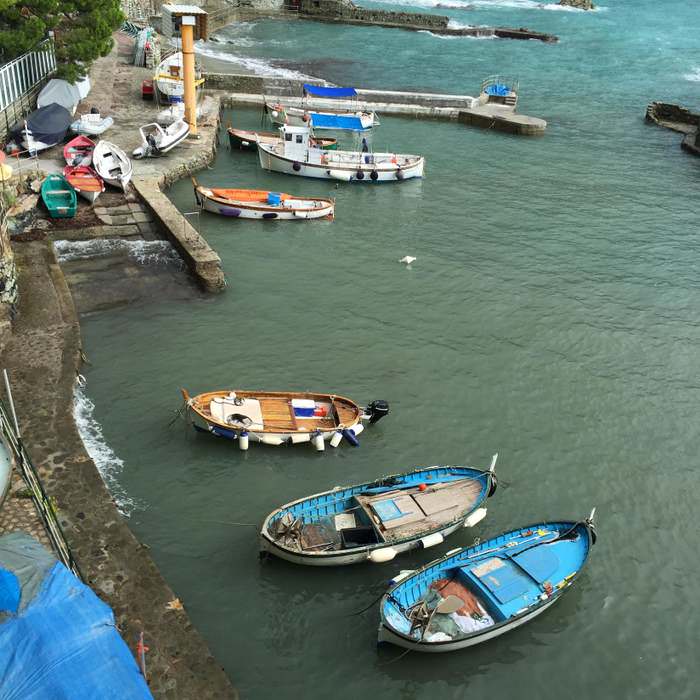 Only 10 stalwart fishermen still ply the waters of the Cinque Terre in traditional 10-meter boats.

Roberto Vegnuti is struggling to dramatize the contradictions and aspirations that comprise the success story of the Cinque Terre, perhaps the best-known tourist attraction on the Ligurian coast of western Italy, famous for its beaches and coastal hiking trails. As head of marketing for the Consorzio Turistico Cinque Terre (the Tourism Consortium of the Five Lands), he is responsible for explaining these incongruities to a group of journalists as we wander the narrow winding streets of Monterosso, the northernmost and largest of the five villages.

For more Italy inspiration, take a look at our 7 Day Italy Itinerary that will take you from Venice to Rome. 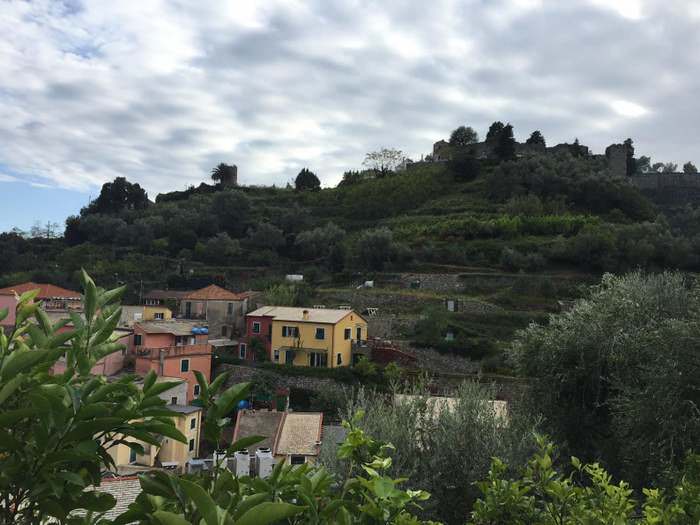 The terraced hinterland above and around the Cinque Terre

We try to pay attention as he insists that the effetto cartolina (the postcard effect) barely scratches the surface of what the Cinque Terre have to offer. History here dates back to Roman times. Culture includes a Nobel Prize-winning poet and writer, Eugenio Montale, who drew his inspiration from local geography. Food and wine include specialties found nowhere else, such as locally-grown lemons, locally-fished anchovies, and Sciacchetrà, a prestigious dessert passito grown only on the hills around us. 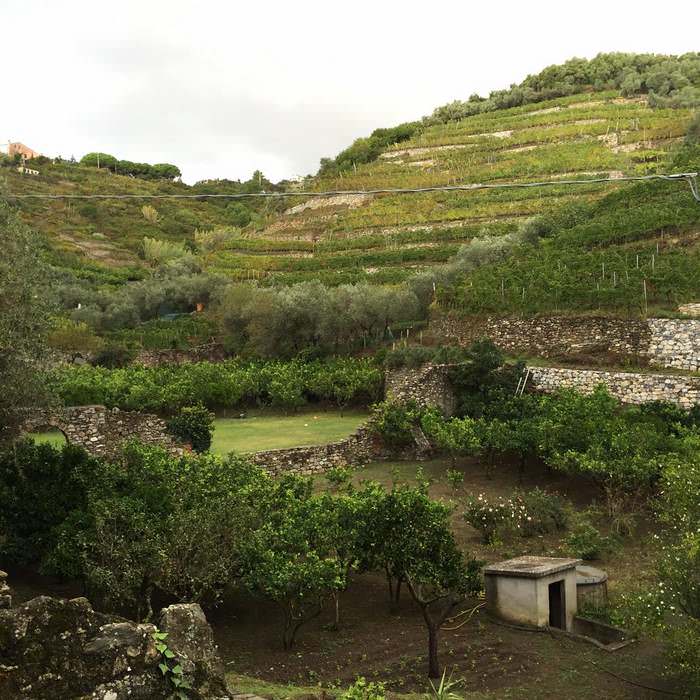 Lemon trees in the foreground, terraced hills behind.

During our visit here, we will be exposed to all these attractions: it’s easy to succumb to their allure. But now, strolling along Monterosso’s cobblestoned lanes, flanked by stolid two and three story buildings rendered in flamingo pink and yellow ochre, a little piazza here with a statue of Giuseppe Garibaldi, a flower-bedecked balcony there, palm trees and small cafès everywhere, one wonders why the Consortium is so resistant to the picture-postcard label. 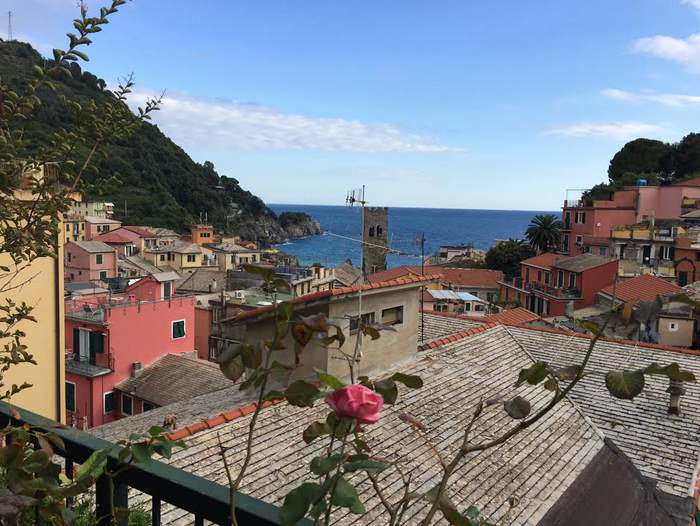 Just another breathtaking view, looking down on Monterosso

Our perplexity increases as we follow our guide up a steep path on a cone-shaped hill leading to the Il Convento di Monterosso al Mare (the Convent of Monterosso), also known as the Convent of the Cappuccini Monks.  Not only is the 17th century church worth seeing on its own merits for its architecture, history, sculptures and paintings by Italian artists — and possibly one by Van Dyck – but the views en route are worth the trip all by themselves. If you are a dog lover, or if you simply want to catch your breath, you can stop at a giant statute of Saint Francis petting a wolf and admire the seascape, as the bronze figures seem to be doing. Oh and don’t forget to bring your bathing suite. The beaches in Cinque Terre are must as well. 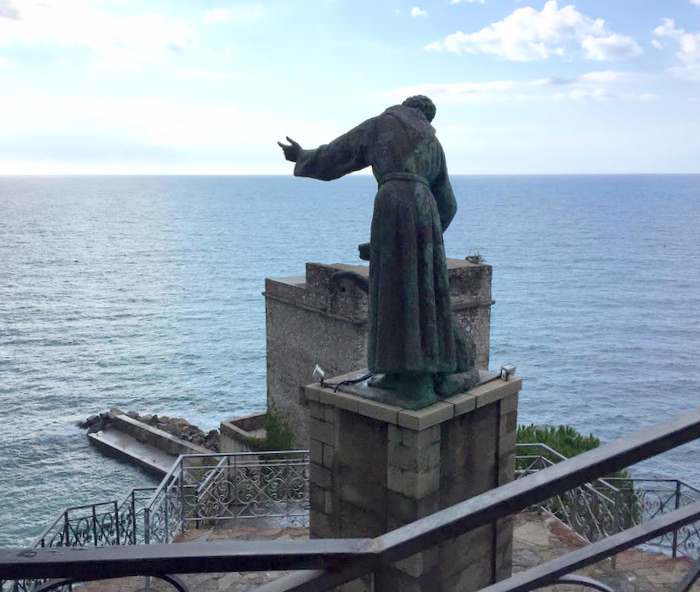 You can’t see the wolf in this picture, but you can see why St. Francis has stopped to admire the scenery.

Back in Monterosso, Carlo Torricelli takes us on a tour of Monterosso through the eyes of Eugenio Montale. Carlo is a teacher and scientist as well as a guide, and he uses Montale’s own words to help us understand the port, the rocks, the jutting sandstone promontories, a solitary house clinging to the cliffs as Montale might have seen it in his poem, The House by the Sea:

The path ends with the brave
whom the tide gnaws with its ebb and flow.
Your heart close to me that hears me not
already sets sail perhaps for eternity.

Vernazza has the most picturesque port of the Cinque Terre, with its V-shaped harbor an embrace for the few fishermen remaining in the five lands (only 10 of them who engage in traditional fishing with boats of 10 meters or less). We learn that anchovies are the most important local catch; they are featured in many recipes and found on every menu. They are rich in omega-3 and have less mercury than similar species elsewhere. Their distinctiveness is recognized with an IGP label and the Cinque Terre honor them with not one but TWO celebrations, a sagra in June for fresh (i.e., fried) anchovies and one in September for the salted version. We eat anchovies every possible way – fresh, fried, baked, plated, in pasta, on focaccia — and learn that the salting process must last at least 45 days to ensure that the preserved fish are safe to eat. 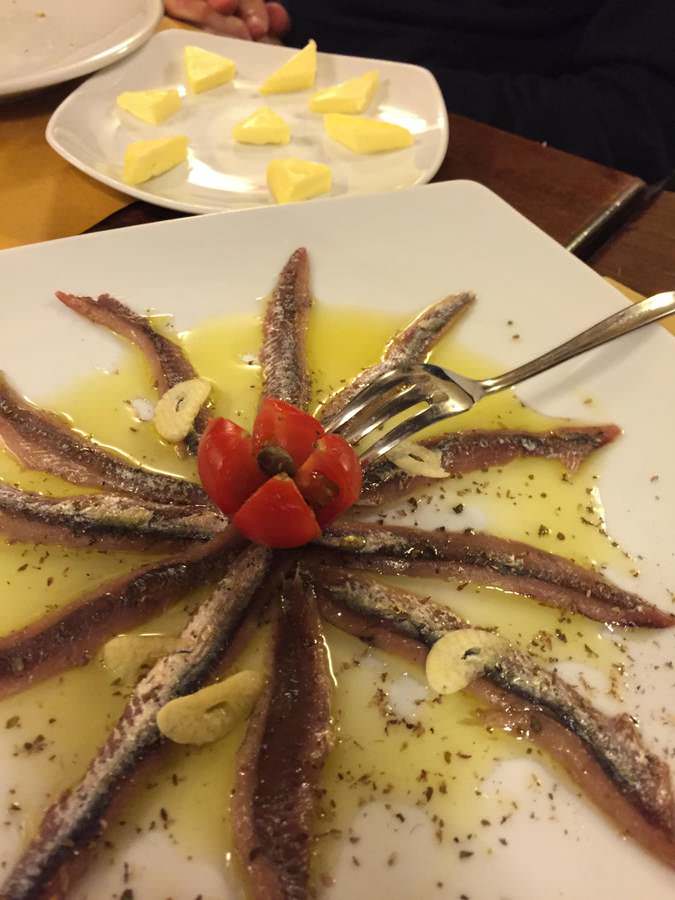 Locally-fished anchovies are the star of every table.

Corniglia is the smallest of the five towns, and the only one that has never been a fishing village. Unlike its neighbors, it is perched well above the water line. To enjoy a unique panorama of all five villages, we need to climb 382 steps from the station or catch a bus to reach the town center – a Lego block jumble of yellow, pink, orange, and red. The Romans founded Corniglia as a strategic military outpost and it remains less accessible than its sister villages. Its surrounding greenery includes lemon trees that produce a fragrant sub-species of the more-famed lemons of Amalfi. The Cinque Terre host a lemon festival each May in honor of this native fruit (in Monterosso, as it is by far the largest town in the Cinque Terre). You can even bring lemons back home with you in the form of lemoncino, the Ligurian version of limoncello. One night we are offered an aperitivo of prosecco accentuated with fresh local lemons and mint leaves. The unexpected pairing of these flavors is amazing. 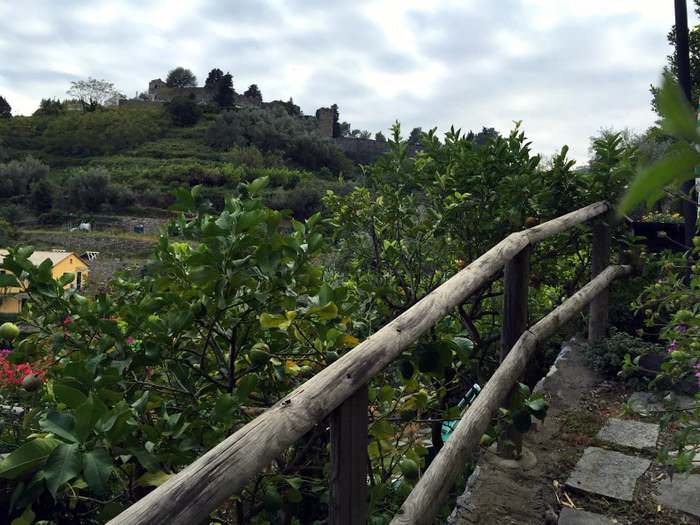 Farming here is tough but has ecological — and panoramic — paybacks.

Manarola seems carved out of a precipice, just as the terraced vineyards surrounding it and the rest of the Cinque Terre seem carved out of coastal cliffs. The wine cooperative of the Cinque Terre is located here, servicing the 24 tenacious vintners of the area, who grow Albarola, Bosco, and Fermentino grapes. These form the basis for the area’s noted Cinque Terre DOC wine and the more famous, and decidedly more costly, Sciacchetrà DOC, a prestigious dessert passito.  Wine production is so limited that the few bottles sold outside the area are for intenditori only, but the importance of the terraced vineyards goes beyond the retail value of the wines themselves.  A mud slide in 2011 devastated much of the Cinque Terre, in part because many previously terraced hills that had served as a protective barrier against such disasters had been abandoned. Grape growing on these steep slopes is tough work and not for the faint of heart.; however, local government is trying to encourage more terracing for wine growing and other agricultural pursuits. Fortunately for them, the thirst for Sciacchetrà has never slackened. 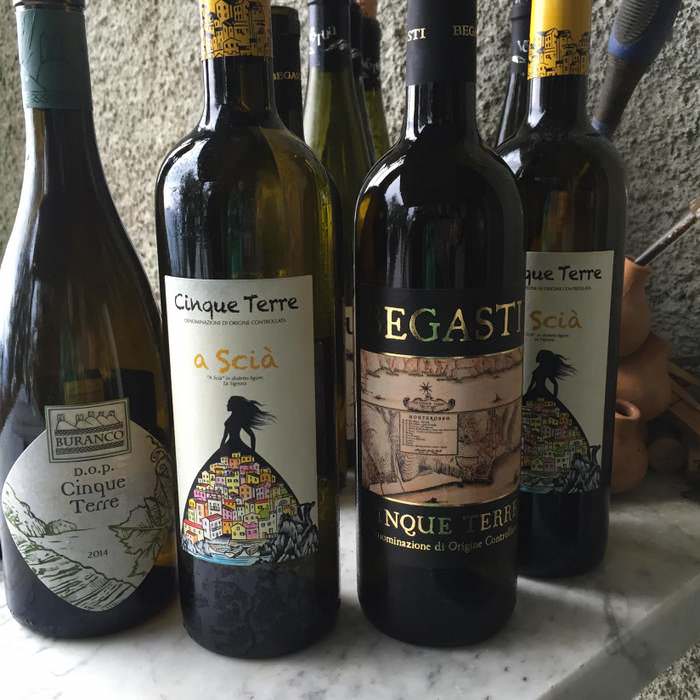 We didn’t visit Riomaggiore, the southernmost of the five villages, on this recent trip. But all of us had been there before. It is popular as the starting (or ending) point for the classic Cinque Terre trail, a five-hour-plus hike from here back to Monterosso (or vice versa). The section between Riomaggiore and Manarola is called the Via dell’Amore (the path of love) and is the most-requested because it is the shortest (20 minutes) and easiest. Unfortunately, frequent mud slides due to the insufficiently-terraced hills mean this path is often closed. But there are 24 others that take from less than an hour to 12 hours (the one from Levanto to Portovenere).  They range in difficulty from “easy” to “expert” and have the advantage of being less crowded – in summertime WAY less crowded – than the Via dell’Amore. For hikers, the effetto cartolina is to be savored in movement. This way, it is ever-changing . . .  and often challenging.

Staying longer in Cinque Terre is an excellent idea. Such an incredible place -- great descriptions of the towns.

Great article but one thing that still amazes me is how many people still think Cinque Terre is a town and not an area. I also like the fact that each town although alike are also different.

When people go to visit the Cinque Terre area I hope they appreciate all the work some of the towns had to do to get their town back up and going after the floods and mudslides that was mentioned in the article.

Recovering from this wasn't something easy since the towns are small and not exactly close to anything making getting supplies to fix the towns that were affected more difficult.

Why is this not surprising? Italy IS magic . . . although more for those who visit briefly than those who live here. Same for the Cinque Terre: yes, it is magical, but the price it is paying for its popularity is a high one, verging on the breaking point these days.

We hiked the Cinque Terre in 2003, before mudslides. It is a challenging and rewarding hike. We entered Vernazo rightat 5, coming from a steep path into the town with a street so narrow you could touch the buildings on either side. It had the feeling of pilgrimage. As we enetered the town the church bells started chiming, as if to announce our arrival. We made our way to the main square by the port and the cathedral to find a wedding party spilling from the church and being greeted by glasses of Prosecca. We felt included in the party. And somehow we knew that our daughter would marry the handsome Italian man who had created this magical day for us. This March is their 10th anniversary.