Waterfall Country in Fforest Fawr Geopark and Brecon Beacons National Park is one of South Wales’s natural gems, a collection of deep valleys, rocky gorges, ancient woodlands and over 16 stunning waterfalls connected by some 25 miles of walking trails. While visiting the park this summer, my family and I had a wonderful time exploring one of Waterfall Country’s most accessible walks, the Elidir Trail. 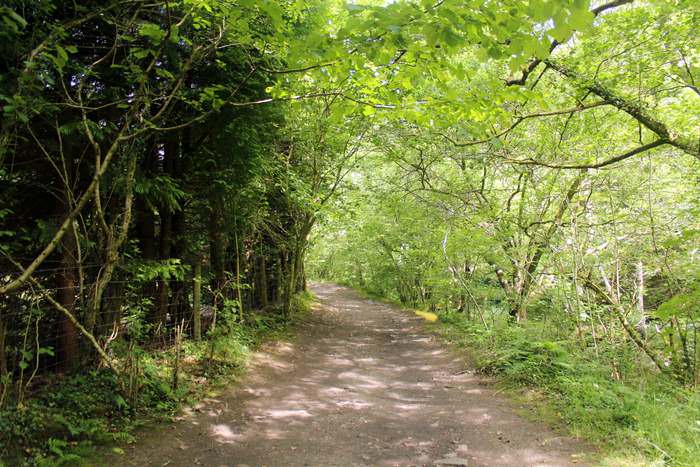 On the Elidir Trail, photo by Carrie Uffindell

My husband Erik, our five-year-old son Finn and I arrived in the quiet village of Pontneddfechan on a typical Welsh summer day – bright blue skies dotted by puffy white clouds, the temperature mild. One of several communities offering easy access to Waterfall Country, Pontneddfechan is a former silica mining hub and sits at the confluence of the Rivers Mellte and Nedd Fechan. 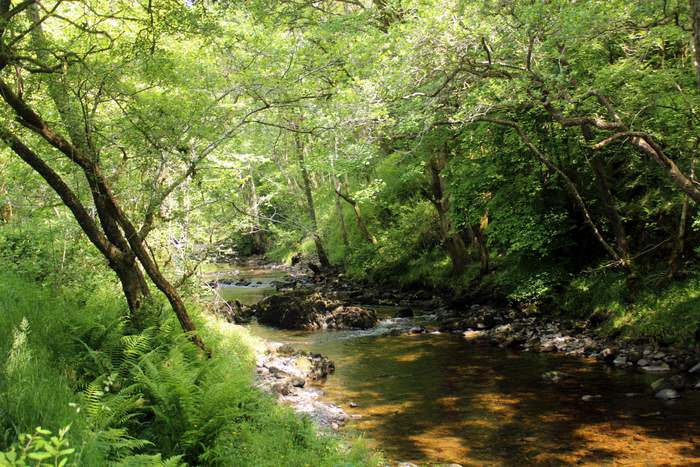 The village is also home to the geopark’s Waterfall Centre , where visitors can learn about the area’s geological and industrial history as well as purchase detailed maps and brochures for all the waterfall trails. We picked up a map of the Elidir Trail, an easy to moderate walk through a forested gorge to four distinct waterfalls. 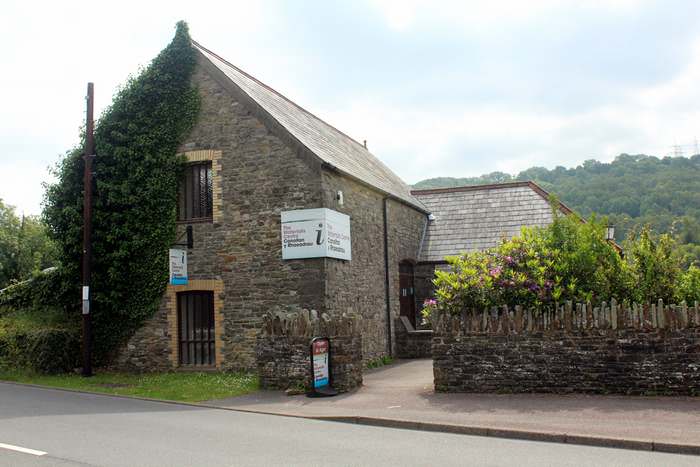 The Waterfall Centre in village of Pontneddfechan, photo by Carrie Uffindell

Located just across the street from the Waterfall Centre to the right of The Angel Inn, the Elidir Trail can be done either as a relaxed, 90 minute walk, round-trip, to the first and most popular waterfall on the circuit, Sgŵd Gwladus, or the Gwaldus Falls. For those wishing to view all four falls, allow three to four hours for a round-trip walk with plenty of stopping time. Note: There are plenty of exposed roots and muddy sections on the trail, even in the height of summer. Geopark officials recommend dressing accordingly.

Following the way markers, Erik, Finn and I entered through the trailhead’s metal gate and walked along the wide, well-maintained path lined with bright green foliage, including sessile oak and ash trees as well as over 200 species of mosses, liverworts and ferns. The Nedd Fechan river burbled cheerfully beside us as we followed in the footsteps of the horse-drawn trams that once transported the mined silica to Pont Walby and the Neath Canal. The trail is popular and we greeted couples, families and groups of all ages during our walk. 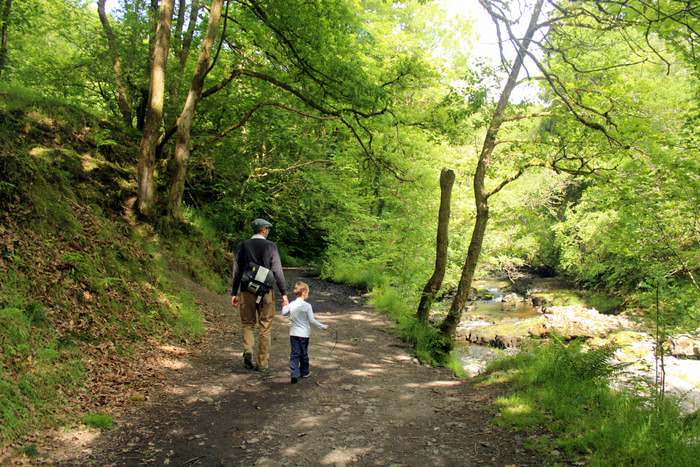 Erik and Finn on the Elidir Trail, photo by Carrie Uffindell

A short time later we came across the ruins of an old corn mill, once used by local farmers, but now remaining the stone wall is covered with ferns and mosses. After checking out the ruins from behind a sturdy fence, we continued on to the first falls. Along the way we spied a low-lying entrance to one of the old silica mines, covered by a thick metal grate. 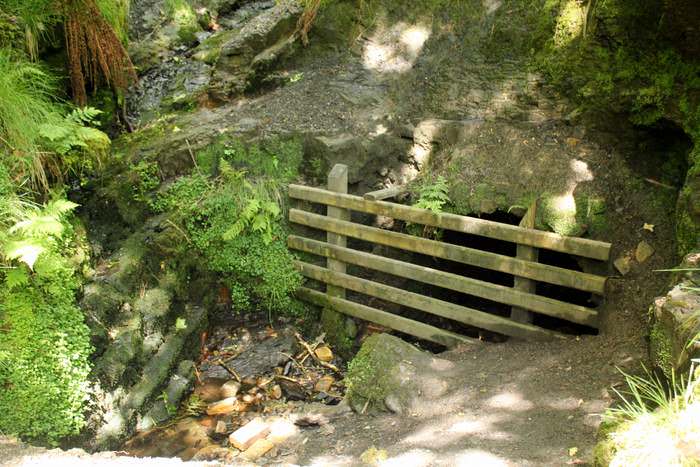 Entrance to the Flooded Silica Mine, photo by Carrie Uffindell

Before long we reached the confluence of the Nedd Fechan and the Pyrddin rivers. We crossed the bridge, following the signs to Sgŵd Gwladus on to an off-shoot path that heads upstream along the River Pyrddin. Minutes later we heard the waterfall before it came into view, elegantly cascading down from a thick rocky shelf. 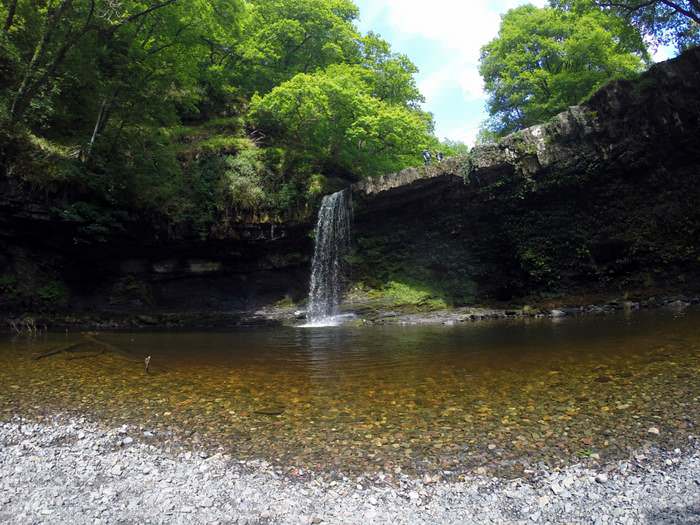 When we were done snapping pictures and playing in the water, we doubled back to the bridge. From there we continued on the main path along the Nedd Fechan to see the Elidir Trail’s three other waterfalls, Sgŵd y Bedol, Sgŵd Ddwli Isaf and Sgŵd Ddwli Uchaf.

Here the path quickly became steeper, more uneven and muddy in sections but the views of the ravine, the river and the waterfalls made it all worthwhile. After enjoying a quick snack on one of the many benches dotting the trail we reached Sgŵd y Bedol, the Horseshoe Falls. The falls are formed where the Nedd Fechan pours over several semi-circular ledges of rock and into a deep pool. From the trail, we watched in amusement as a small group of energetic young men took turns jumping off a ledge into the pool below. 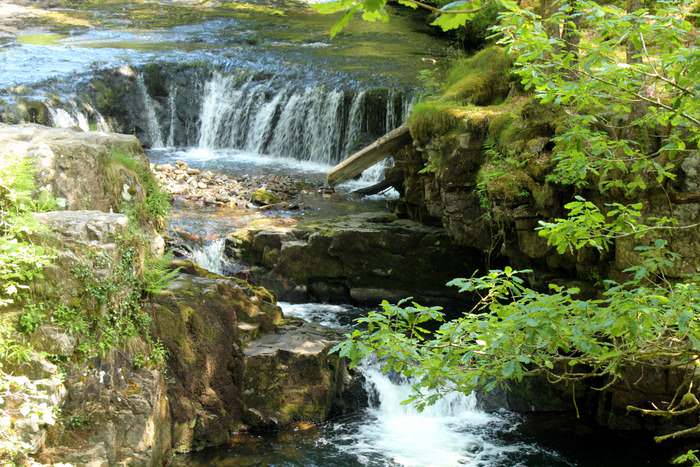 A little further upstream and we reached Sgŵd Ddwli Isaf and Sgŵd Ddwli Uchaf, the Lower and Upper Gushing Falls, which are said to really live up to their name after a heavy rain. On this dry summer day the falls still impressed, especially Sgŵd Ddwli Uchaf. After viewing the lower falls, Erik, Finn and I climbed up a short rock wall to the upper falls, walking within feet of the tumbling curtain, the sound of rushing water filling our ears. 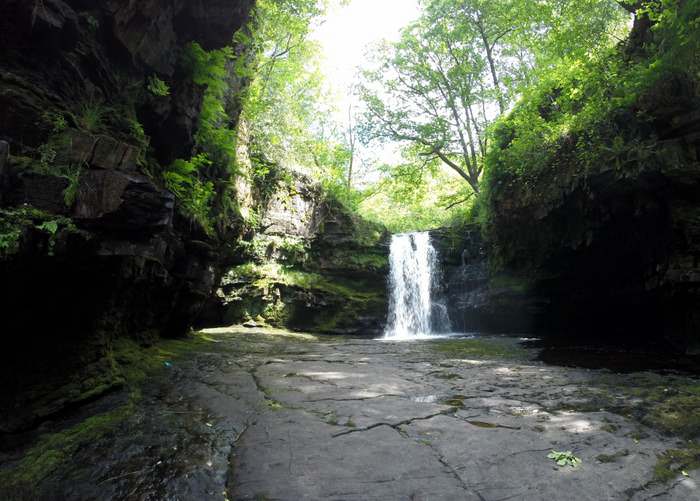 Before I knew it was time to retrace our steps back to the village, our memorable day in Waterfall Country etched in my mind forever.

If you go on this Waterfall Walk: 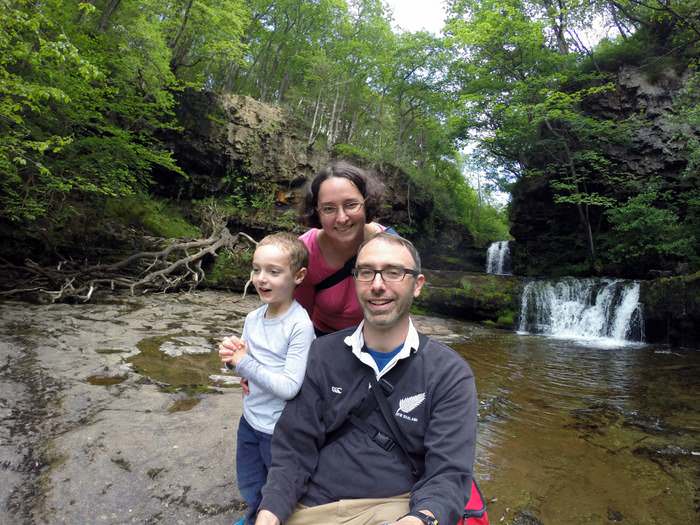 For more information on Wales or to plan a trip to this extraordinary country, see Visit Wales .
Place to stay: Looking for a place to stay while visiting Brecon Beaons National Park? My family and I found a wonderful cottage right in the center of the park through Brecon Beacon Holiday Cottages.

Written By Carrie Uffindell for EuropeUpClose.com
Carrie Uffindell is a freelance writer focusing on Pacific Northwest destinations, family travel, hand crafted libations, culinary adventures and the United Kingdom. She often travels with her husband Erik and their young son Finn, both of whom share her love of adventure. Carrie writes for both print and online media. You can visit her website and follow her on Twitter.

Great article, wonderful pictures, good memories of family fun. (I may be prejudice but Finn is so cute!)