I rested my hands against the windowsill of van Gogh’s bedroom in the Maison de Santé Saint-Paul, an asylum in Saint-Rémy, and peered out at the painter’s Provence: rolling wheat fields bordered by olive trees, a purple-tinged mountain silhouette sweeping the horizon, a golden sun illuminating it all. I was mesmerized by this view, all the more knowing that Vincent van Gogh stood in this very spot, his easel at his side, and painted. 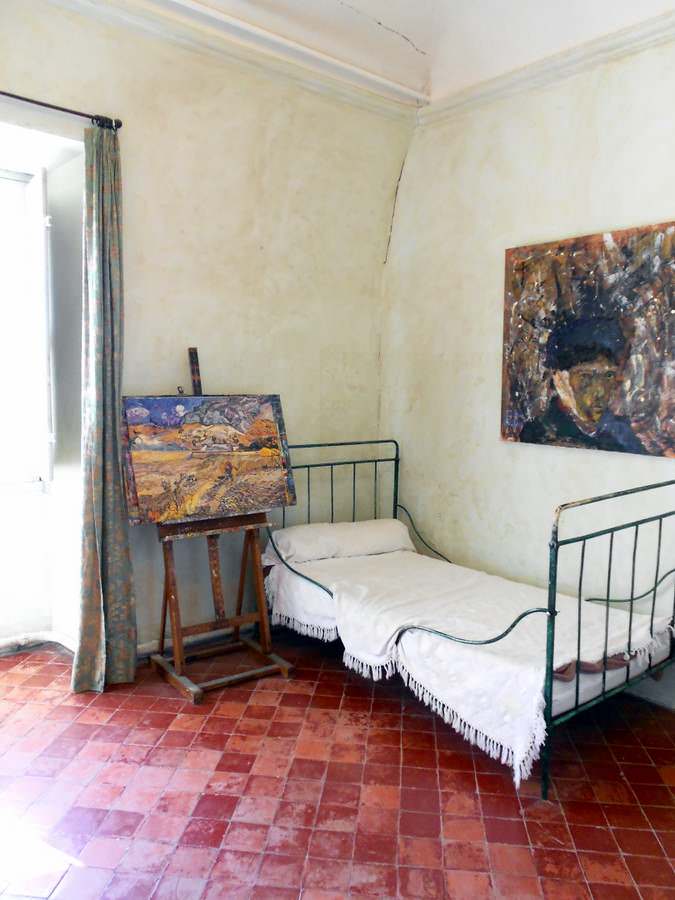 The room I was standing in was in a sectioned-off part of a large building, meant only for tourists and art-lovers. The rest of the building was a fully functional psychiatric hospital- when I listened closely, I could hear a distant and deep moaning. It was carried over by the wind and up into this room, where perhaps the 125-year old ghost of van Gogh still lingered in the walls, watching the fields and the trees and that golden Provincial light.

I was spooked, but I was also inspired. I’d just spent the past two days immersed in a van Gogh inspired tour through the streets of Arles and the town of Saint-Rémy, where I was able to stand in his footsteps and absorb the same views he must have had when he set out to paint his masterpieces. 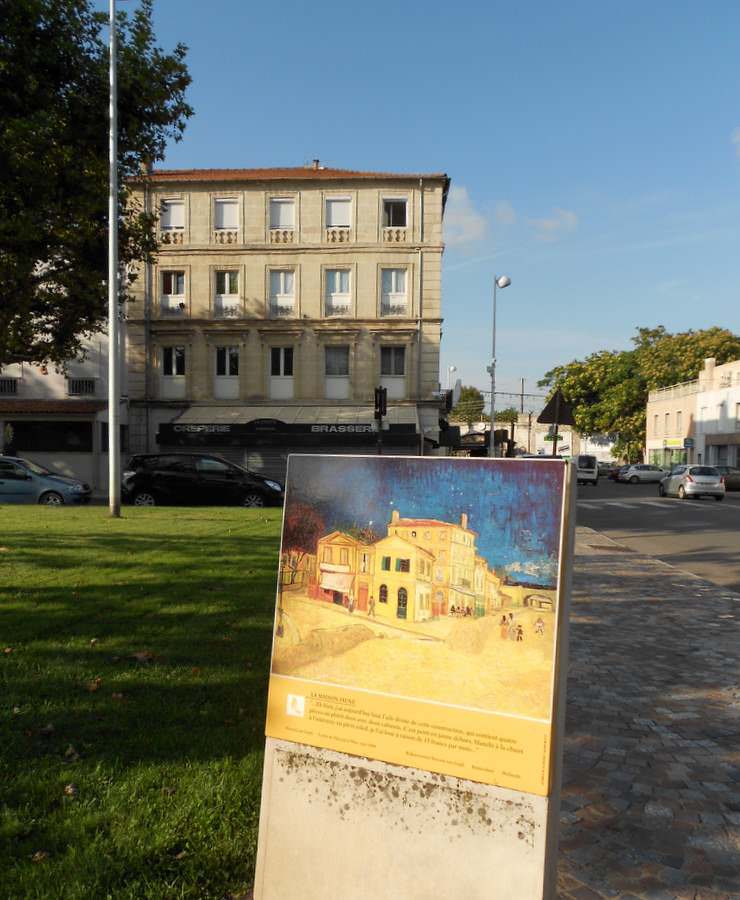 Reproduction of The Yellow House, Arles (the building was damaged during a bombing in WWII and later destroyed)

Vincent van Gogh didn’t begin his career as an artist until 1880, when he was already 27 years old. After establishing his craft in Paris, he moved to Arles, a small city in Provence, in 1888. Inspired by the light in the south of France, the Impressionist colors he absorbed from his time in Paris became even more saturated and wild while in Arles and, later, in Saint-Rémy: his paintings danced and swirled.

When I arrived in Arles, I stumbled upon van Gogh very accidentally. Walking towards the town center from the train station, I noticed a plaque embedded in the pavement- a yellow arrow and the silhouette of a man with a straw hat. “What’s this?” I turned to my friend, who was also studying the plaque with curiosity.

We followed the arrow and before long came across an easel resting by the side of the road, showing a small reproduction of van Gogh’s “The Yellow House” with some accompanying text. My friend and I looked at each other, excited. “It’s a van Gogh tour!” 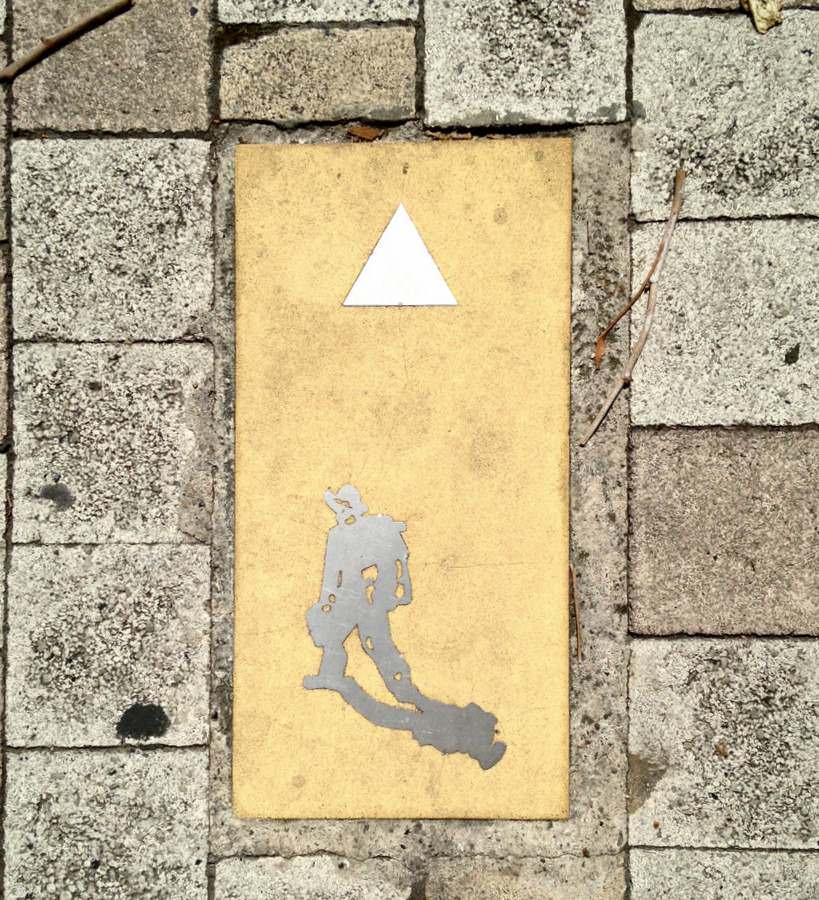 A plaque in Arles signifying the the Van Gogh Tour Route

If you stop by the Arles Visitor Center, you can grab a walking tour map, which points out the 10 reproductions of van Gogh’s work that are located on easels throughout the city, strategically placed just where van Gogh might have set up his own easel to paint. These easels take you to bridges and parks, past a bull-fighting arena, to the banks of the Rhone and into a sidewalk café. It’s a bit like a treasure hunt that not only leads you to the places where van Gogh drew great inspiration, but that takes you on a decent tour through the city of Arles.

Despite the fact that van Gogh produced over 300 paintings during the 15 months he spent in Arles, none of his works are housed here permanently. While it’s fun to seek out the spots where van Gogh painted and to see the reproductions, nothing compares to the real thing. Luckily, the Foundation Vincent van Gogh has created a wonderful solution to the lack of the artist’s work in the city: the foundation exhibits contemporary artists who depict their interpretations of van Gogh’s work. But best of all, the foundation has secured an annual loan of one of his original works from the Van Gogh Museum in Amsterdam (until March 31, 2016, the painting on loan is “Piles of French Novels”).

My friend and I took a break from our van Gogh hunt at a small round table on the Place de Forum, where we sipped iced coffee drinks and paged through our guidebooks. Across from us was the sunny yellow awning of Café Van Gogh, immortalized in his painting “Le Café La Nuit”. 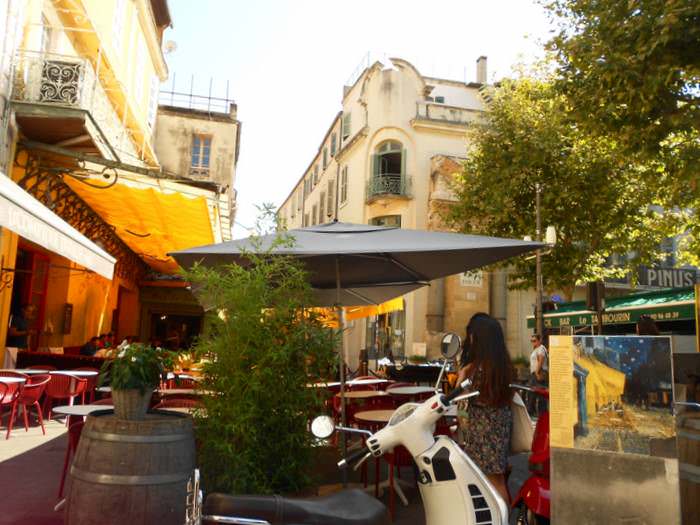 “Look,” she said, pointing to a page in the guide. “We’re not far from Saint-Rémy, where van Gogh spent a year in an asylum.”

We decided to take a trip there the next day, to explore the town and tour the asylum. 25km from Arles, Saint-Rémy is a quintessential Provincial village, with fountains in the middle of squares, and streets lined with cafés and art galleries. A short walk from the center of town, the Monastery Saint-Paul-de-Mausole sits on a flat patch of land, tucked away from the main road by a path lined with olive trees. Adjoining the 11th century monastery is the Maison de Santé Saint-Paul, a psychiatric institution whose most famous patient was van Gogh, who stayed there from May 1889-May 1890. 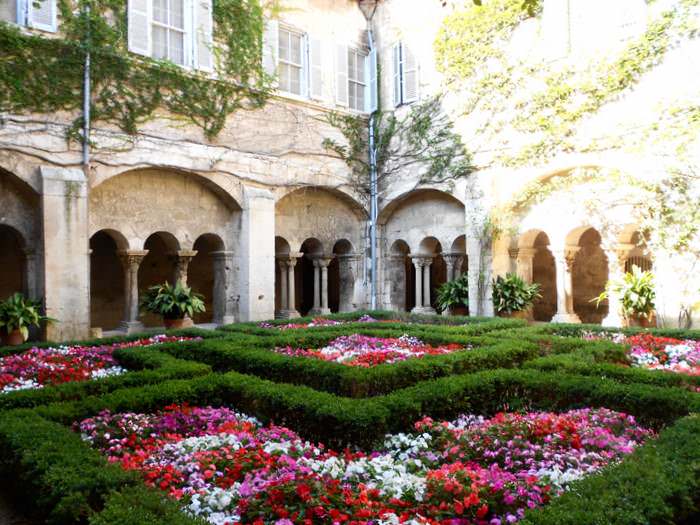 The monastery was quiet when we entered; it was early in the morning and the office had just opened, so we were among the first visitors of the day. I walked into the chapel and then over to the cloister, where I lingered for awhile. The space was quiet, except for the heavy flapping of wings as birds flew from the corners and over the roof of the building. Bright flowers were arranged in patterns, columns were carved in intricate designs. The monastery is a beautifully preserved example of Romanesque architecture, and with its peaceful corners and fields of lavender stretching through the field at the back of the property, I could imagine how van Gogh might have been inspired- despite the nature of his stay- by the beauty and the peace of the monastery and its gardens. 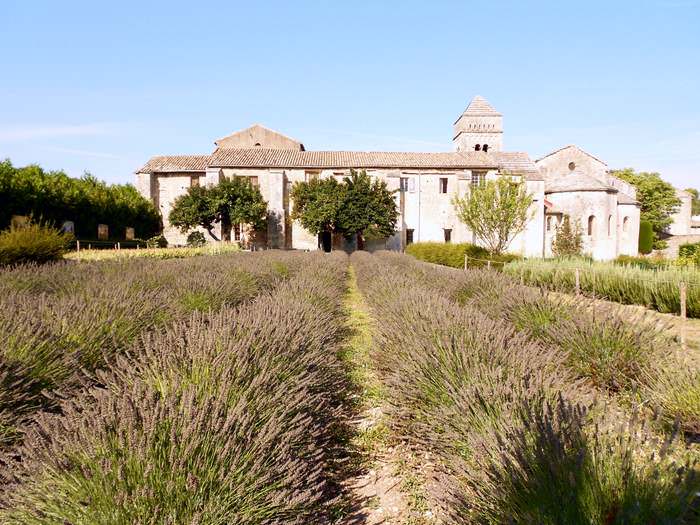 I continued through a narrow hallway and into a room where I briefly learned about the history of the hospital, and read through the highlights of van Gogh’s stay here. His room was located on the second floor: small, with red-tiled floors and white plaster walls. The furnishings are reproduced, and they are simple- a long single bed, a writing desk, and a small space next to the window for his easel. A soft light flooded through the double windows and I stood there for a minute, gazing out onto the grounds below. This was van Gogh’s view, and it was a beautiful one. 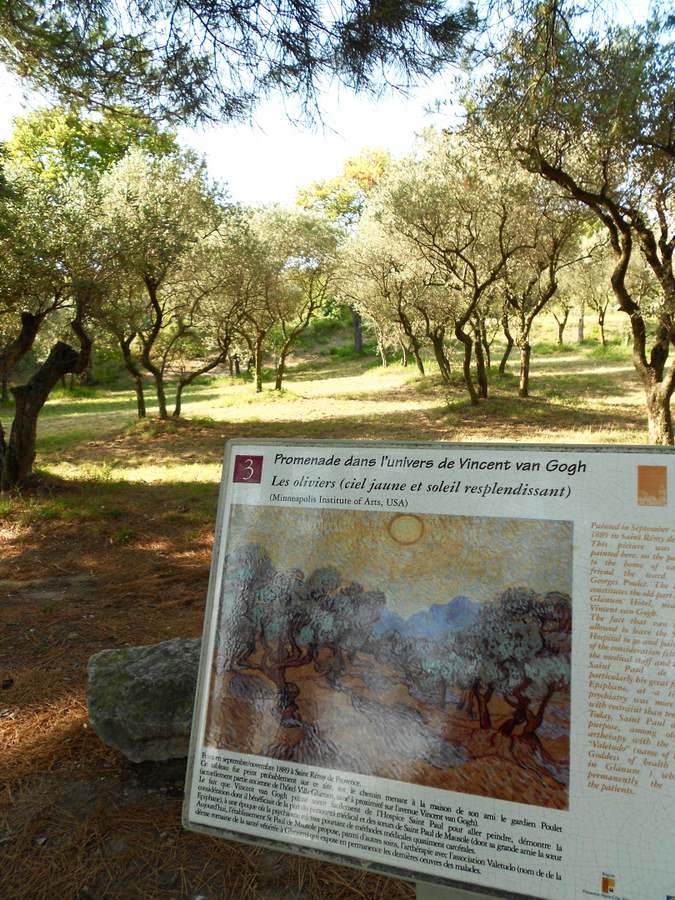 Where to Stay in Saint-Remy

Where to Eat in Saint-Remy

La Pintade Chaponnee
If the weather is nice, stop by La Pintade Chaponnee, a “mom and pop and son” take-away gourmet shop, with home-made food and beautiful attention to detail. With charcuteries, cheeses, prepared meals, vegetarian options and a large wine selection, this is the perfect place to provide for a lavish picnic.
57 rue Carnot
13210 Saint-Rémy-de-Provence
Tel: +33 04 90 94 66 65
Hours: Tues-Sun, 10am to 2pm and 4pm-8pm

Written by and photos by Guest Contributor Nadine Karel for EuropeUpClose.com
Nadine Karel is a school counselor in the suburbs of Philadelphia. She likes to spend her summer breaks trekking across Spain, hunting down the best baguettes in Paris, and throwing back double espressos in Italy. You can read more of her travel tales at singlestepcamino.wordpress.com

Hi, my husband & I will be traveling to Provence in early October and are deciding on a home base for exploring the area. We think St Remy or Arles. How do these two compare? -any distinct advantages of one over the other?

I love both cities, although St-Remy is smaller and more charming than Arles. Arles has many Roman ruins that you can visit including a colosseum. https://europeupclose.com/article/market-day-saint-remy-de-provence/