Erlangen is a university town with a population just over a 100,000. Here visitors can look into a typical Franconian town without the overwhelming crowds of tourists you’ll find in larger cities in Bavaria. This small city is food obsessed. Traditional German fare and upscale cuisine are equally valued in a town that prizes the bounty of Bavarian agriculture. 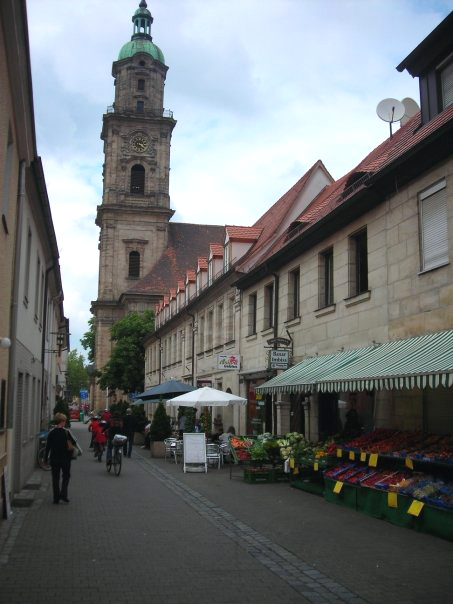 Erlangen contains some of the best-preserved Baroque architecture in the whole of Germany. The Hugenots’ legacy is immortalized in the centrally located Hugenottenplatz. This public square holds an impressive daily farmers’ market. The market is always bustling with locals doing their daily shopping. Choose from local fruits, vegetables, cheeses and meats for an impromptu snack. 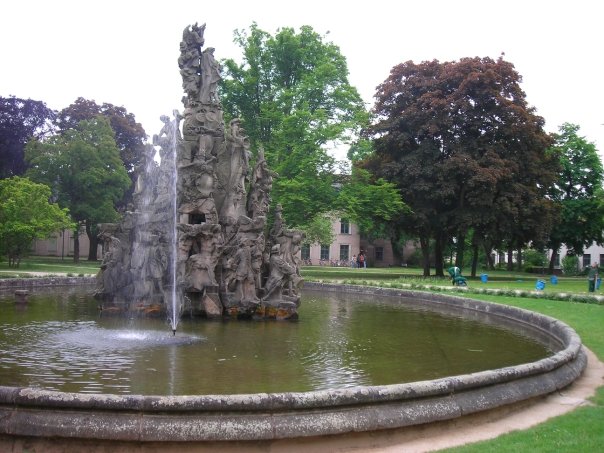 An ornate fountain in the Schlossgarten

Being a university town means a significant percentage of students, and a correspondingly  large number of inexpensive bars and cafes. Steinbach Brau on Vierzigmannstrasse, a local brewery near the city center, and Bogarts, Gueterhallenstrasse 2, opposite the shopping center, are two popular destinations. Many of the younger generation frequent the bars located near the Arcaden, the indoor shopping mall. The Brasserie,  Nürnberger Strasse 3, is a perfect combination of bar and restaurant. Situated alongside the main pedestrian area of the city, outside dining provides a great spot for people watching. For entertainment to accompany your beer, visit Musikkeller Strohalm , Hauptstrasse 107. This large cellar features live music and is quite popular among the students. 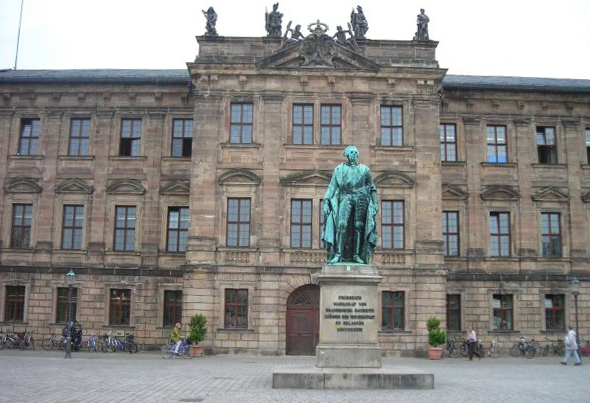 Formerly the Margravial Palace, this 18th Century structure now serves as the administration building of the university

Erlangen is a fantastic food city, ranging from typical homestyle Franconian fare to adventurous cuisine. Atler Simpl, Bohlenplatz 2, serves such dishes as Nürnberger bratwurst, dumplings and potato salad. Many of the surrounding villages have great restaurants offering local food, but Alter Simpl is the best bet for traditional food within the city. Café Mengin, located near the market square and adjacent to the Erlangen Schloss, serves well-made German fare as well as several vegetarian options. The outdoor seating offers great views of the city’s main garden. For lighter dishes, stop by the Erlanger Teehaus, on Friedrichstrasse. This café serves tea, coffee and sweets and its backyard garden is worth a visit. For more upscale meals, try Basilikum, on Altstaeder Kirchenplatz or Altmanns Stube, on Theaterplatz. 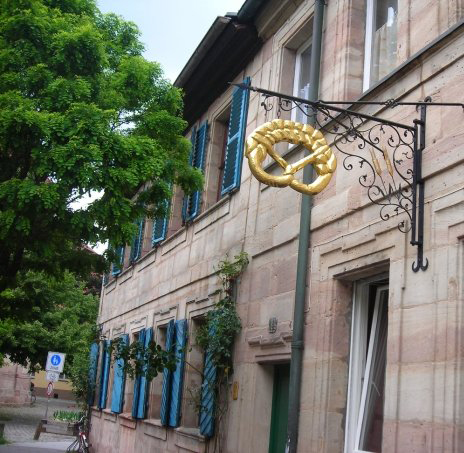 A German bakery tucked away on Schiffstrasse

Erlangen also boasts numerous international restaurants and cafes including Greek, Turkish, Italian and Chinese options. Stopping by any number of Turkish cafes for a Döner kebab is a good, filling option for lunch on the go. Bruno is a hidden gem of an Italian restaurant on Schiffstrasse. While enjoying a meal there, be sure to stroll along the street for great retail shops and hole-in-the-wall bakeries.

Beer is celebrated with equal fervor as the food in Erlangen. The largest annual event in the city is the Bergkirchweih, a two-week long festival in late May which celebrates beer. Beer cellars, booths, tents, live music and amusement rides entertain festival-goers. A seating area for 10,000 marks this as the largest open-air biergarten in the whole of Europe. The festival draws a million people to the city every year and has been held since the mid 18th Century. The beer cellars are situated up a hill, about a fifteen-minute walk from the city center. If you plan on visiting the city during this event be sure to book your hotel reservations well in advance, as lodging fills up quickly for the festival. 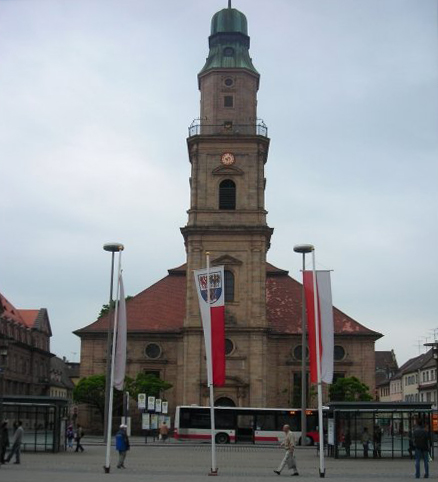 Huguenot church, one of the main symbols of Erlangen

Once you have exhausted your stay in Erlangen, use the city as a jumping off point for travel to other locations in Germany. Trains leave daily from the Baunhofplatz to such cities as Nürnberg, Bamberg, Munich and beyond. Or rent a car and get lost in the too numerous to count little towns and villages that dot the landscape of Franconia.

Written by and photos by Morgen Young for EuropeUpClose.com

I was stationed in the U.S. Army in Erlangen from 1984-186 at Ferris Barracks. I was with 1/94th FA (MLRS). New barracks were built and we were the first to live in them. I really enjoyed Erlangen.

Hi! My husband and I were stationed there in 1981-1985 and absolutely loved it. What a great introduction that was for me to the Army! We skied the Alps and saw so many things in town and also shopped in Nuremberg, the PX was in the old building that the original trials of Nuremberg were held and I thought it felt haunted...ha-ha! Fond memories like the rest of you! My husband was with Headquarters 135 Armored Division.

I was stationed in Erlanger in 1948 through 1950. My outfit was Hq. & Has Battery 1st Division artillery. The larger group was the First Division.

Having served in the US air force in Erlangen in 1946 (I am now 87), I've often wanted to converse with someone who understands English and perhaps remembers the air force base that was also at one time a German air force base. Perhaps someone a little closer to my age who might recall the base. Thanks