Forty miles north of Nürnberg in the German state of Bavaria is the historic city of Bamberg. Divided in half by the Regnitz River, Bamberg is a rare German city in that it escaped Allied bombing during World War II. While other cities have been rebuilt or redesigned, Bamberg retains much of its original infrastructure and charm. As a result, the city is a perfect example of the Franconian region of northern Bavaria. 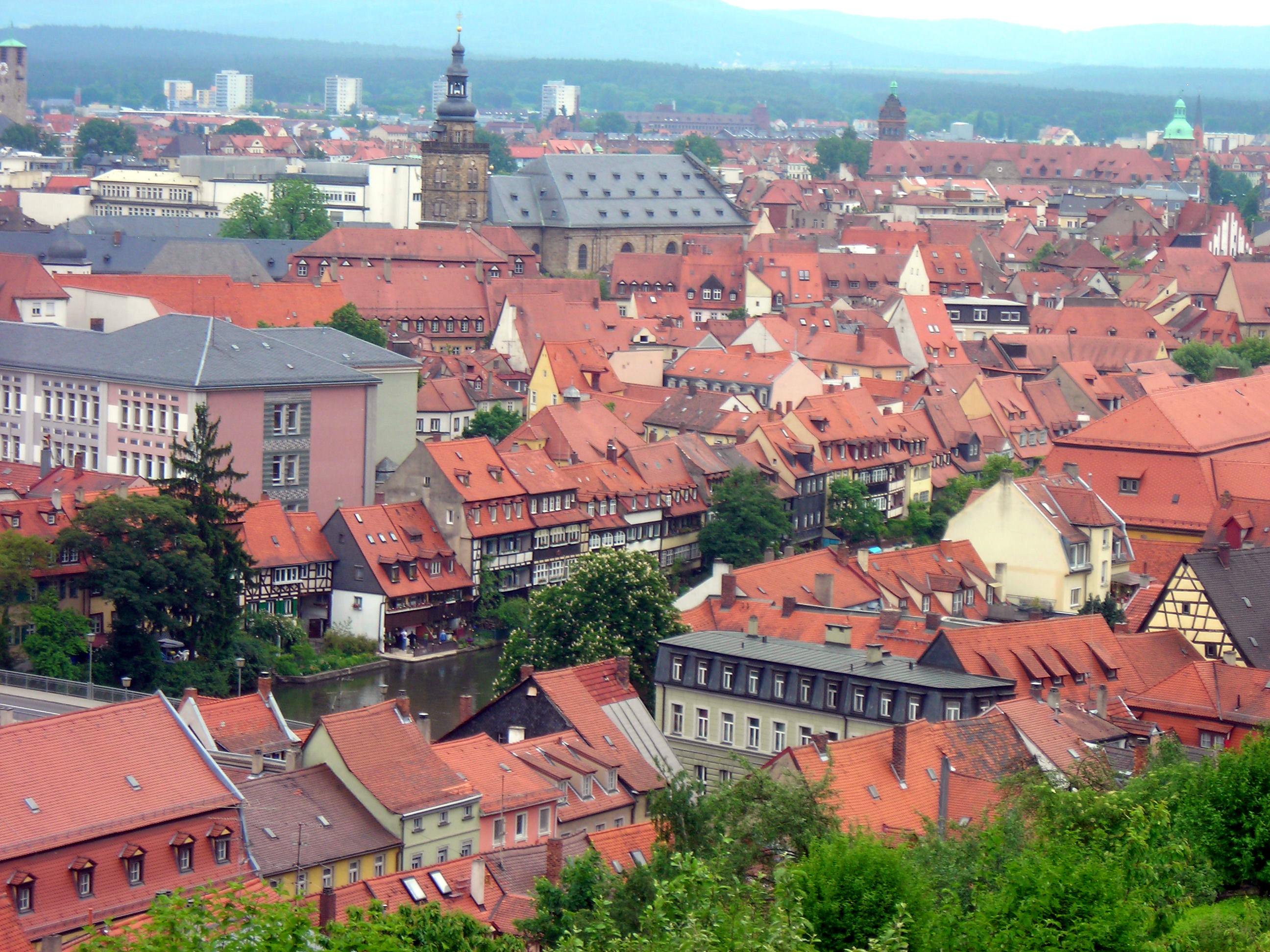 The city survived the war because it did not house major weapons production and was not an industrial base for the Nazis. Escaping the catastrophic treatment of cities like Nürnberg and Dresden, Bamberg features some of the oldest standing buildings in all of Germany. The Bamberg Cathedral was constructed in 1237, the Michaelskirche Monastery erected in the twelfth century and what is now known as the Old Town Hall was built in 1386. In fact, the Old Town Hall was placed on a small island in the middle of the Regnitz River as a means of protection, with a bridge spanning the river allowing today for up-close viewing of the beautifully painted exterior walls that have survived the centuries. 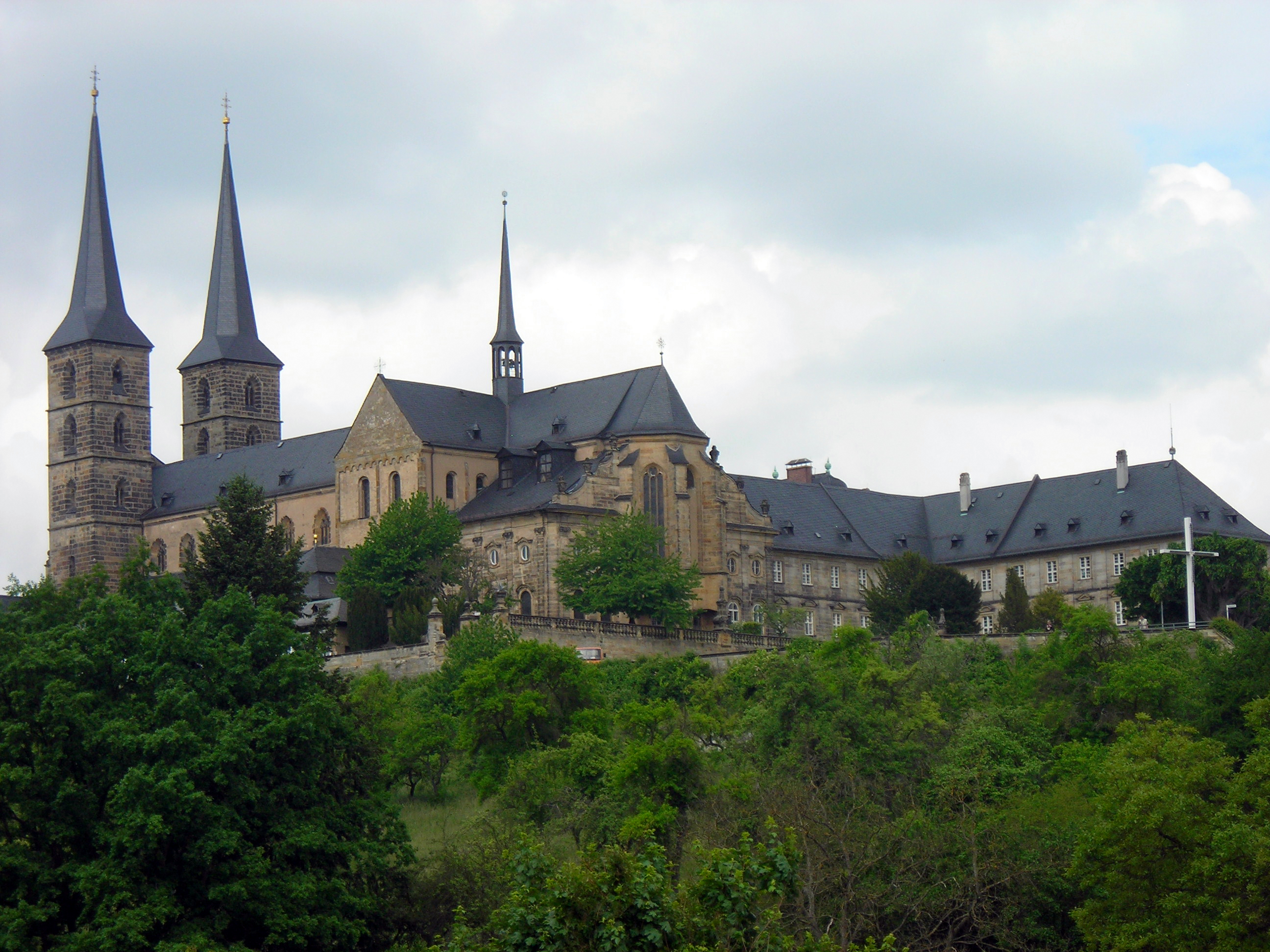 Bamberg can claim many historical anecdotes but perhaps most unique is its status as the final resting place of a Pope. This fact is unique because apart from Pope Clement II, no other Pope is buried north of the Alps. Clement II previously served the church as Bishop of Bamberg from 1040-1046. Elected Pope in 1046 after a series of controversial councils and deposed European leaders, he went to Rome to lead the church. Yet less than a year into his reign, Clement II died of lead sugar poisoning while traveling across Italy. His body was returned to Bamberg, the city he adored, and was interred in the western choir of Bamberg Cathedral where he remains today. 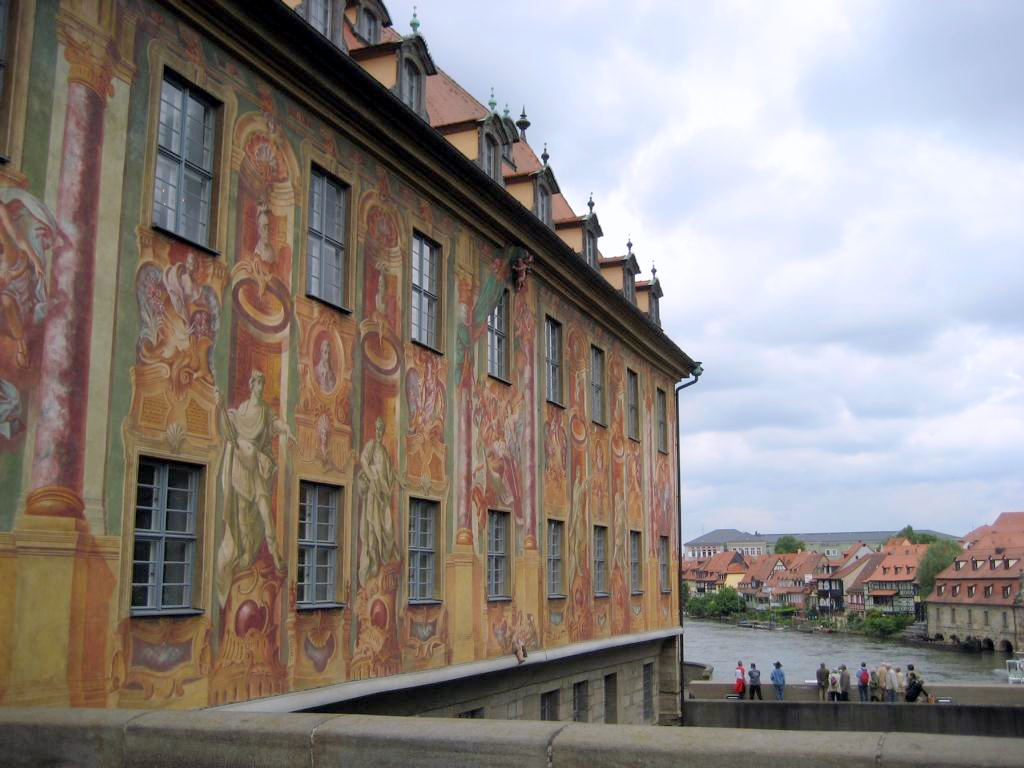 While Pope Clement II came to rest in Bamberg when his life was over, there is a world-famous product that began its life in the Franconian city. In German, it is called Rauchbier, or smoke beer. This type of beer is known around the world as both an interesting variety of brew as well as having originated in Bamberg. The flavors and aromas are created by drying malted barley over an open flame, providing the drinks with an aura of smoke. The Schlenkerla brewpub is a tavern in the middle of the city that produces and serves the famous brews to tourists and locals alike. The tavern was first mentioned in 1405 and is currently owned and operated by the sixth generation of a local family.

Beer, in general, plays an important part in the city of Bamberg. At peak times, there were 70 Breweries and Microbreweries in Bamberg. Not bad for a city with only about 70,000. There is also a brewery museum and Weyermanns, one of the largest Malt producers in the world. You can tour the historic, but fully functional factory and try beers made from their various malts. 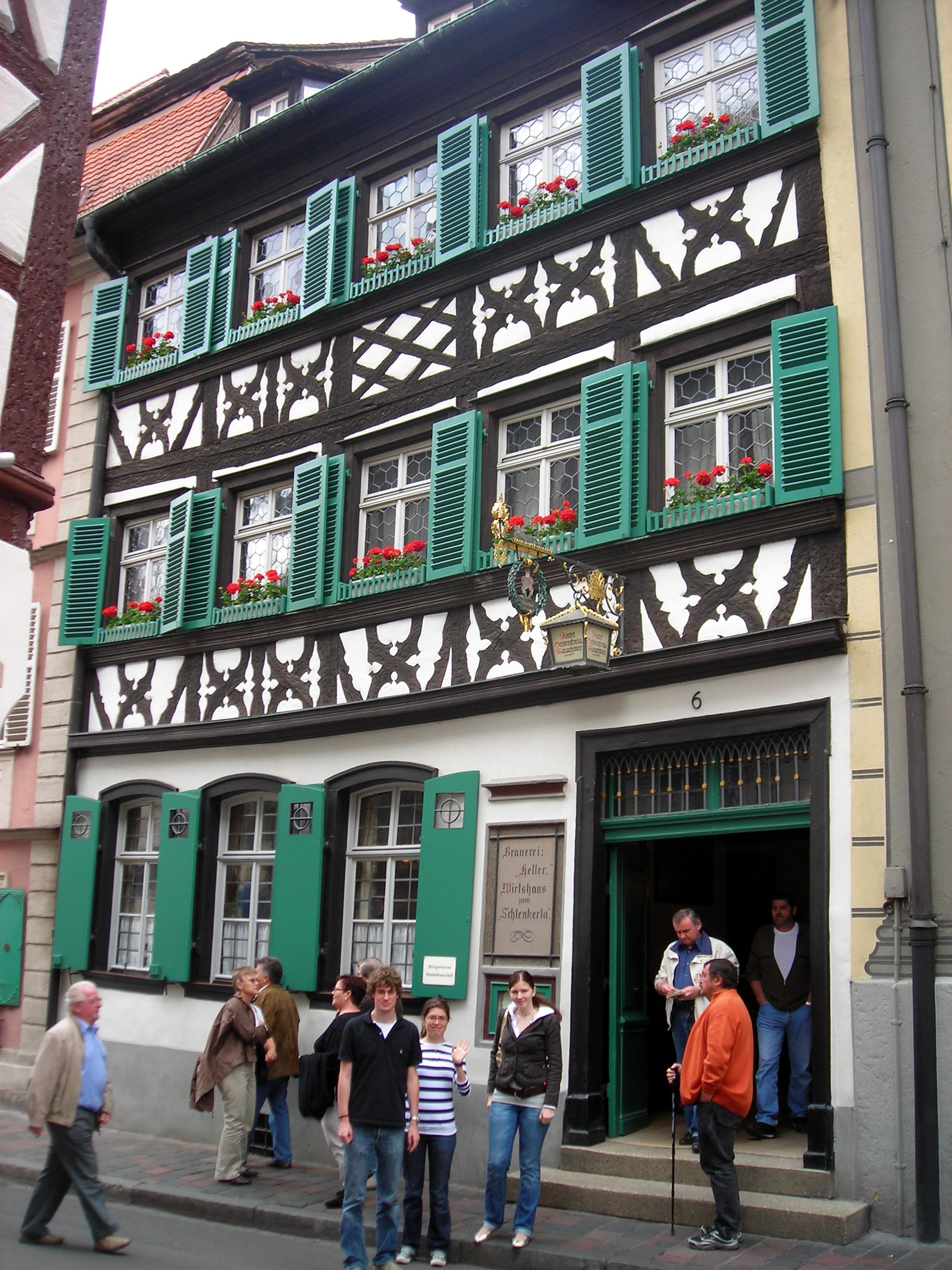 Bamberg – the Little Venice of Germany

Bamberg is a small but dramatic city. The Little Venice area bordering the river displays classic examples of half-timber construction and German architecture. Massive churches rest on each of the seven hills of the city providing panoramic views from every crest.

Yet despite the age of the city, Bamberg is young and alive with over nine thousand university students interspersed within a population of just seventy thousand. Though larger, more famous cities claim more publicity than Bamberg, none can match its intimacy, variety or authenticity.

There are quite a few Bamberg hotels to choose from, no matter what your budget is. 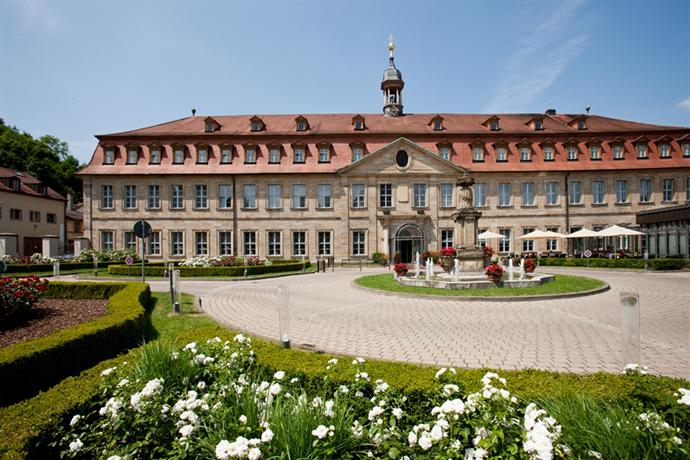 This Bamberg Hotel is something truly special. If you have ever wanted to sleep in a castle, here is your chance. The Hotel Residenzschloss in Bamberg is one of the top choices and staying in this beautiful historical building will make your stay in Bamberg an experience you will cherish forever.

>>Book your room at the Bamberg Hotel Residenzschloss here! 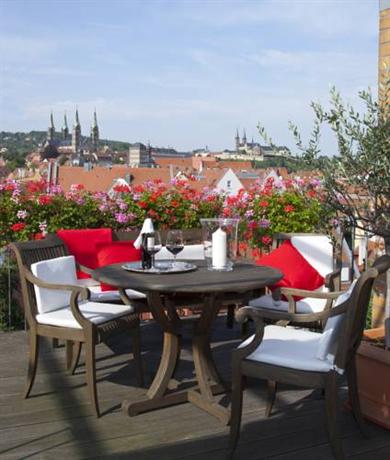 This beautiful 4 star hotel is located in the heart of Bamberg, giving you easy access to all the sights and shopping areas of the Franconian city.

What makes this hotel so special is its rooftop bar, overlooking the quiet streets and half-timbered houses of Bamberg.

This Bamberg hotel features all amenities of a 4-star hotel, as well as an onsite dining option and a mouthwatering breakfast buffet every morning.

>>Book your stay at the Bamberger Hof Bellevue here! 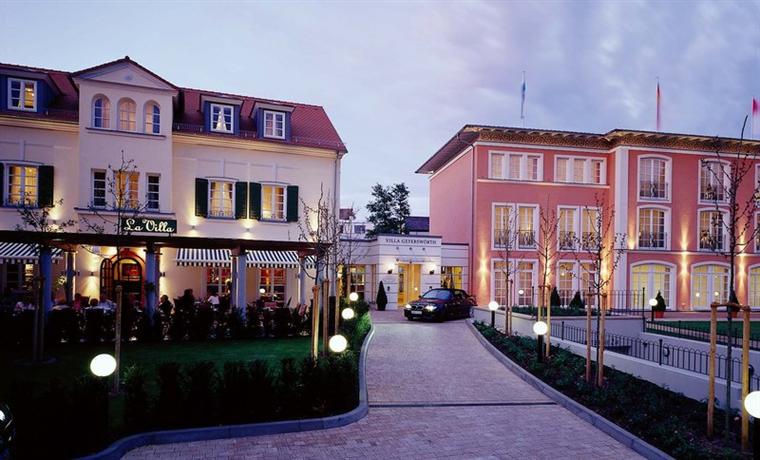 Villa Geyerswoerth is another great Bamberg Hotel option for you. This stunning property is located in the city center of Bamberg, features all modern amenities combined with the traditional charm of the historic building.

While located in a quite area of town, it is also in an ideal location to explore Bamberg’s buzzing nightlife. As one of the oldest universities in Germany, Bamberg is a thriving college town and the nightlife has much to offer, no matter if you want to explore German beer culture in a cozy bar or go clubbing.

For more hotel options in Bamberg, please take a look at our Hotel Price Comparison Tool. It will let you search for hotels, view photos, and reviews, and then it shows you which booking platform has the best price for your hotel choice. What a great and easy way to save money!

Historic and Authentic Bamberg Germany was written by and photos by Michael Orr for EuropeUpClose.com 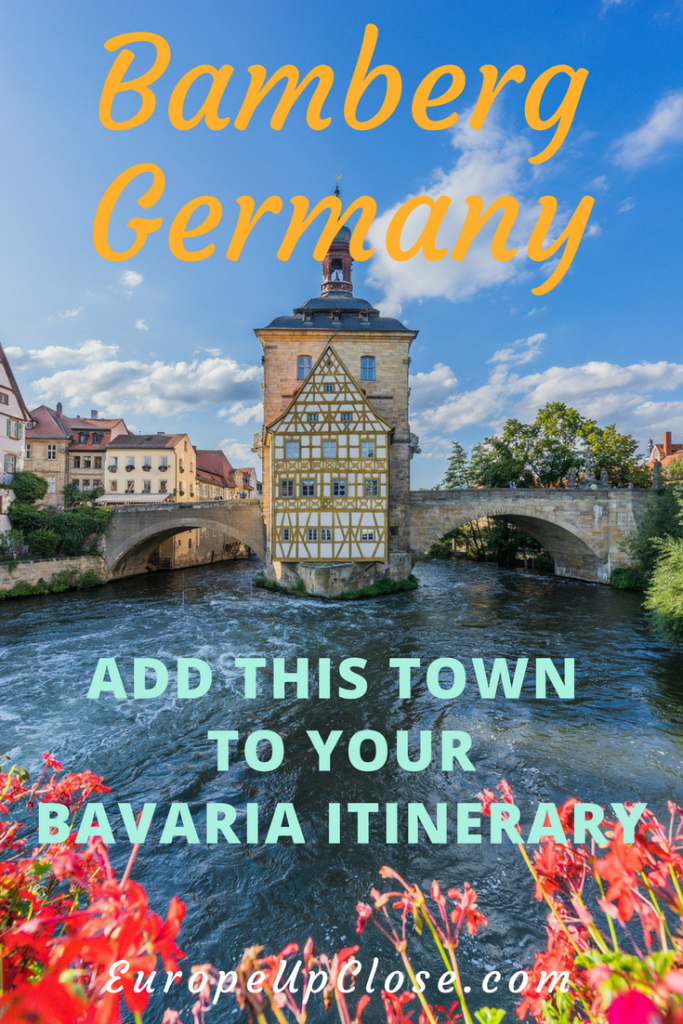 I have walked through the streets of Bamberg many, many times... and yes I have walked up all seven Hills while rambling through this enchanting City... I lived in a small village near Bamberg, Memmelsdorf for 10 years... was the most important and influential time of my life... The people of Bamberg are very friendly and open their hearts to those who open theirs to Bamberg and all of its ancient charm... I am sad to say that the US Army Post, Warner Barracks is now closed... However, like all things in life time moves on, and the US Army mission in Bamberg has long since been complete and it was time to relinquish the position of guardian leave Bamberg in all of its beauty to the people of Bamberg... I have spoken with many people, some family, and some friends, but all say that the US Army presence will always be felt and welcome in Bamberg... With that being said, I will return to Bamberg as often as time allows, for as long as time allows... I have learned a thing or two during my time in Bamberg and for that I will always be thankful... The love of my life is from that most wonderful City on the hills... and I will always roam the winding streets if only in my mind...

Beautiful memories...I hope you get to return.

The beautiful paintings on the Rathaus Bamberg (Old Town Hall), were hidden by grime and dirt for many years. They were 're-discovered' after the WW2, when the building was 'cleaned up'. They have been a beautiful edition to this gorgeous town ever since.

Please note, Bamberg was bombed during the later part of the the war (1945). My dad, who is from Bamberg, took me to some of the buildings that had been damaged from the bombing and told me about the dead bodies. There is also footage on YouTube that features the US Troops bombing Bamberg.

I served in the US Army and spent 2 years living there in Bamberg. The base has since closed but I was there while the Berlin wall was torn down. That was something to witness. I loved Bamberg, and still think of it often. I spent many nights walking through the city streets.

I hope you can return sometime. It is a lovely town, and you wouldn't recognize Berlin.

What is the name if the castle in the upper left? Were there but can't remember. George

Hi George, I am re-doing the page to make the photos larger and will label them. You were looking at Michaelskirche Monastery.