A city of two parts; Gallipoli is part Italian main street, part Mediterranean island. The main street portion, Corso Roma, offers great shopping and a number of fine bars and gelaterias, but the island is where the magic is. Don’t worry about booking ferry tickets, however; a short walk on a pedestrian bridge delivers you to the exquisite island. 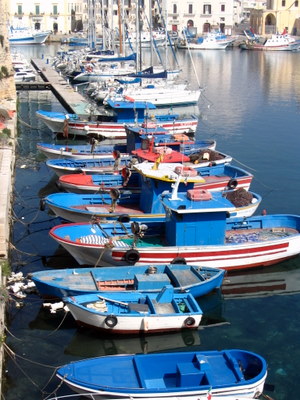 Boats on the waterfront

My girlfriend, Kristin, and I recently spent a night in Gallipoli where we indulged in  fresh seafood, picturesque beaches, spectacular views, and romantic restaurants and lounges. We arrived by train; the island is only an eight-minute walk from the station. As we approached, signs of a working waterfront surrounded us; from men selling raw sea urchins from roadside stands, to a fisherman’s church, and giant nets spread out in the sun. Bright blue and red fishing boats were everywhere.

A first glimpse of the island reveals the Gallipoli Castle and the impressive stone fortification that encases the entire island. After crossing the bridge, we decided to circumnavigate the island, which takes less than thirty minutes total. The road is sandwiched by storefronts and homes on one side and the Ionian Sea on the other. The sidewalk often gives way to patios where you can stop and peer over the side, down the steep stone walls to the rocks and surf below. Many of these patios are occupied by classy lounges which feature comfortable couches and tables beneath canopies and artfully placed curtains that blow in the wind. 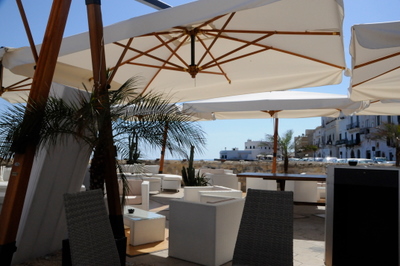 We soon found Gallipoli’s beach, which is accessed by a curving walkway from the street down to the shore. The water was a striking, shimmering turquoise. We had a light lunch of Puglia’s traditional calzones, which are different than any calzones I’d had before. They are

deep-fried and nothing beats the first bite, when the flaky dough gives way to the mozzarella and sauce-filled center. Afterward, for siesta—the time between two and five o’clock when all of Italy looks like a ghost town—we went to Queens Café and ordered a bottle of Castello Monaci’s Èmera, a blend of Chardonnay from the native Verdeca grapes. Produced by a local winery, the white wine was slightly fizzy and had notes of orange; it was a little buttery: just what the doctor prescribed for such a hot day. 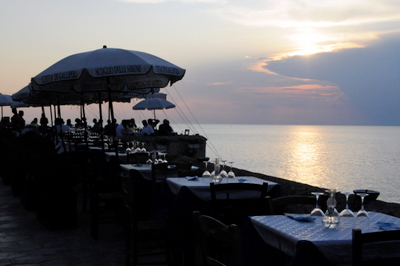 In the evening, we went for aperitivo (happy hour) at one of the bars on the street, Riviera Armando Diaz. For 8.50 euro we were offered a choice of drink and a nice selection of snacks, including bruschetta, frittata, fried seafood, and stuffed pasta. As the DJ matched his musical selection with the incredible atmosphere, we felt enriched by the surrounding natural beauty combined with the swank décor of the lounge. This was a memorable, magical experience that makes you feel, well, as though you are living the dream. 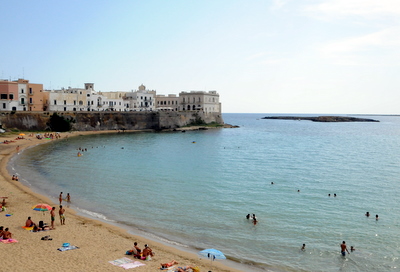 The beach in Gallipoli

For dinner we tried Trattoria Pensione al Pescatore. And while the wine list was lacking, the meal was incredible. Most important were the gambieri crudi, (raw prawns, served whole). They were similar to ceviche in many respects: doused in lemon with a slew of wonderful herbs. Gambieri crudi is a specialty of Gallipoli, so even if you don’t see it on the menu, most places have it. Other impressive dishes were the Seafood Risotto and the Seafood Pappardelle. Both were full of mussels, clams, and calamari, and the pappardelle was homemade. 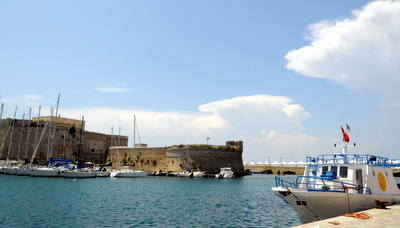 When booking a hotel or B&B in Gallipoli, it’s worth considering the difference between the island and the town’s centro. The walk from the centro to the island is only fifteen to twenty minutes, and the views are outstanding. Peak season is July and August, so for a more intimate experience, try the off season. But even at the beginning of July, Kristin and I had no trouble finding just the right spot on the beach.

I've eaten at several restaurants in Gallipoli and the surrounding area recently. And I've found that the food is both good and bad, but the views are always spectacular. For example, you won't want to leave your table (ever) at Trattoria Scoglio delle Sirene. The mussels are excellent but the view is picture perfect. The prawns were not that good however.