We’ve sung the praises of Bruges, Belgium’s Fairytale City.  But Bruges charming sister village, Ghent, should not be missed; it is just a couple of train stops away and is one of the best things to do in Belgium. Ghent has the same medieval architecture as Bruges, and it too remains untouched by decades of wars. It also offers pristine canals, some of the great places to see in Belgium, and everyone’s two favorites: beer and chocolate. Let’s focus on the best things to do and see in Ghent.

The Churches of Ghent 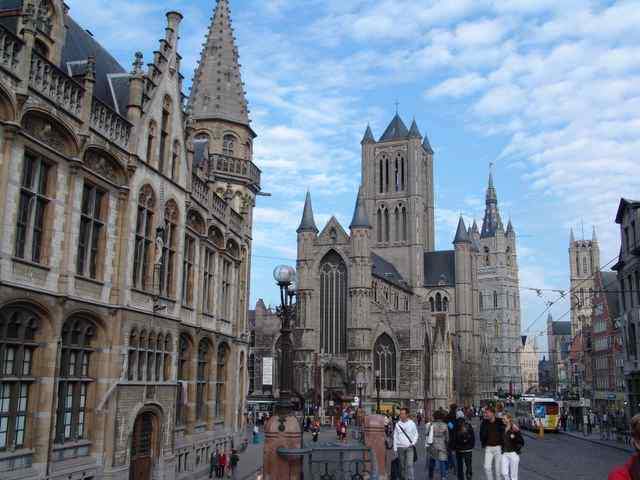 The medieval center of Ghent has some of the best things to do in Belgium and features  quite a number of churches or church-like structures, all of which can be toured and in some cases you can even climb the towers. The main buildings are called the ‘three towers of Ghent’:

The Belfy:  This massive tower has served not only as a bell tower for telling time but has also housed the city’s treasury and in times of war was a defensive location. The hall next to it is not a church, but was a trading hall for fabric, a bustling trade commodity in the Middle Ages. One of the cool things to see in Belgium, you can tour the hall as well as access the highest level of the Belfry.

St. Bravo’s Cathedral:  It is believed a wooden church stood in this spot, but it was replaced in 1038 with a Romanesque church, which was then replaced with the majestic cathedral we see today. Construction took centuries, starting in the mid 1300s and not completed until 1596. The highlight of a visit to St. Bravo’s Cathedral is a viewing of the Mystic Lamb, an unusual and mysterious altarpiece painting and one of the coolest places to see in Belgium. Be sure to grab the audio guide – while it’s long and goes into great detail, you don’t want to miss all the weird and wonderful history of this piece of art.

St. Nicholas’s Church:  This was the first of the three towers to define the Ghent skyline and is a great thing to do in Belgium. The large open courtyard in front of the church was the Corn Market, once busy with guild crafters selling their wares. Thus St. Nicholas’ was popular with  traders, who had their own section of the chapel. The gorgeous organ was built by the same Frenchman whose organ graces the altar of Notre Dame in Paris.

Het Gravensteen is Ghent’s medieval castle, and it has been partially restored so that tourists can wander and explore its remaining walls and explore one of the coolest places to see in Belgium. There are some great views from the top parapets, and you’ll even have an opportunity to sit on a medieval toilet should you find that amusing. It was built in 1885 as a more fortified replacement for the wooden castle that once graced this spot.

The Canals of Ghent 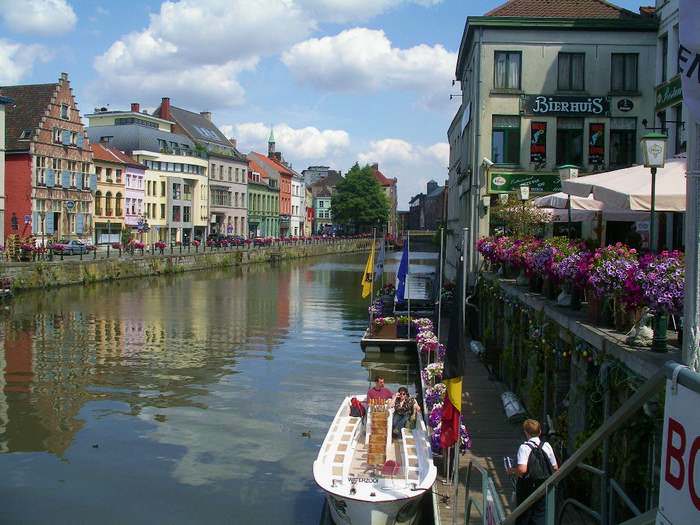 A busy Canal in Ghent

A stroll along the main canal in Ghent is a must-see thing to do in Belgium, both by daytime and by night. The water is eerily still, making for fantastic photographs. Given all the nearby pubs, it is the perfect place to relax and sit a spell. There are a couple of companies running boat tours which offer a different perspective on the city as well as access to a few lanes that you can only see by boat! It’s a short tour, less than an hour.

Where to Eat in Ghent

Don’t miss out on knockout Belgian beers and tasty traditional entrees while you’re in Ghent. For an authentic Flemish-inspired choice, try the stoverij, which is a meat dish marinated in a brown beer sauce. It’s tender and gorgeous, served with French fries (or in this case, Belgian frites). You can also have a “Gentse waterzooi” which is a fish and vegetable stew, usually served with crusty bread.

A favorite pub with the expat crowd is the Waterhuis ann de bierkant (Waterhouse on the beerside.) Although it can get crowded, it is worth the wait for the spectacular waterside setting, friendly service, and a selection of over 400 different Belgian brews. You’ll also find a number of bars and pubs around St. Jacob’s Church as well as the St. Veerleplein area in front of the castle.

Here is an additional tourist guide to Ghent, that is full of helpful information.