Top Things to Do in Ghent Belgium

Ghent is one of Europe’s most underrated, if not unknown, medieval cities. It’s nothing short of spectacular. While most people who visit Belgium limit their time to Brussels and Bruges, the country has so, so much more to offer. Exciting cities such as Antwerp and Leuven, but also Ghent, offer visitors the chance to immerse themselves in a centuries-old city dotted with truly magnificent architecture, world-class museums and wonderful restaurants and bars—Belgian beers are found in abundance on menus all over the place. 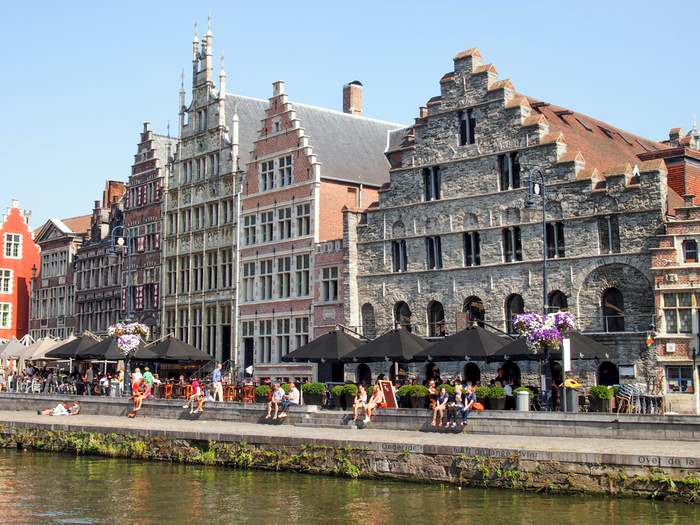 The city of Ghent is the capital of the province of East Flanders, occupying the banks of both the Leie and Scheldt Rivers. This strategic position at the confluence of two main rivers in the Flemish lowlands caused Ghent to develop into one of northern Europe’s most powerful and prosperous cities. In fact, at a certain point in time, there was only one city to the north of the Alps that was bigger—and that was Paris.

During its heydays, Ghent was home to wealthy merchants and tradesmen, kings and emperors (Charles V, Holy Roman Emperor and King of Spain, was born in Ghent in 1500), artists and craftsmen.

Nowadays, Ghent is a vibrant education center with a youthful student population and memorable old architecture. It has arguably one of the best preserved medieval cores of any city in Europe—a car-free area that’s chock-full with churches, guildhalls, striking merchants’ houses, historic squares and cobbled streets. There is even a mighty fortress in the middle of the old city. 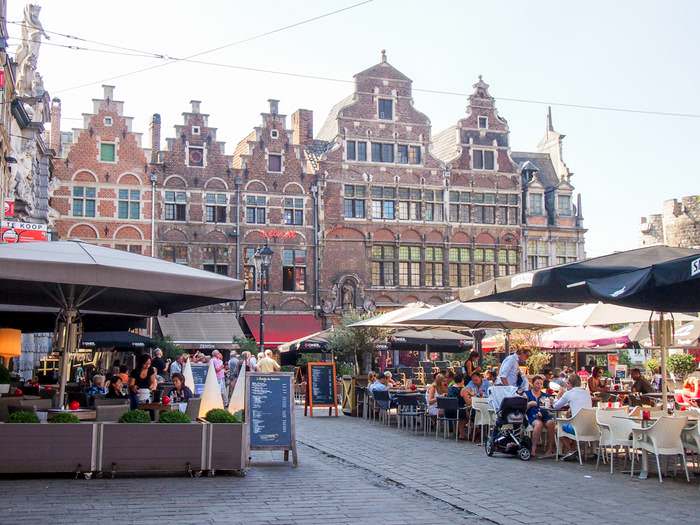 Ghent is, absolutely worth visiting. It is home to what could be considered one of the most stunning waterfronts on the continent and it offers a superb alternative to the touristy open-air museum that is Bruges, to hip yet bureaucratic Brussels, and to upscale Antwerp — although all these cities are fascinating as well. Together they make up the “big four” of Belgian cities, making for a wonderful itinerary in this small Western European country.

But let’s stick to Ghent and take a look at the five sights that should by no means be skipped when visiting this beauty of a city. And because of the interesting history of the city and these top five sights in Ghent, we recommend a tour with a local to show you around the city. You can also book a private tour, which can be perfect if you travel as a group or family. 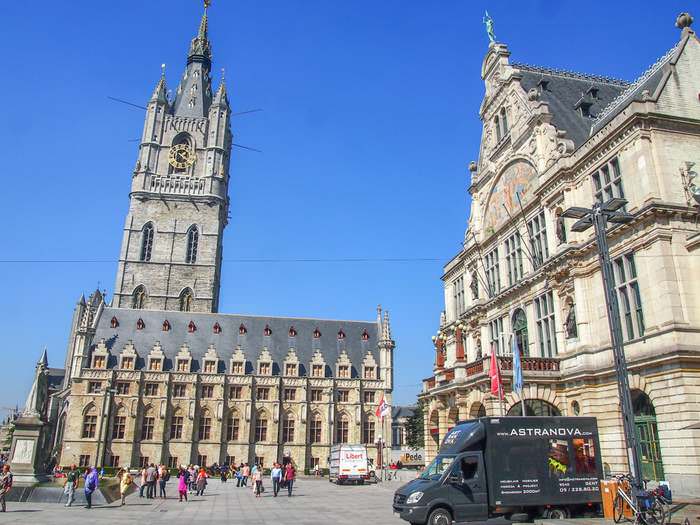 The belfry, one of Ghent’s three towers

Included in the UNESCO World Heritage Site “Belfries of Belgium and France”, the belfry of Ghent is one of the three main towers in the historic heart of the city. Rising almost 300 feet (91 meters) to the sky, this tall structure is attached to the cloth hall, a former major marketplace where the renowned Flemish cloths, carpets, and textiles were sold. The belfry indicated the independent status of this once-powerful city; its bells used to warn against approaching danger or to announce celebrations.

One of the absolute star attractions in Ghent, St. Bavo’s Cathedral, was where the young Charles V was baptized—he would later become the King of Spain and subsequently the Holy Roman Emperor. He ruled this empire that comprised both the Old and the New World, giving it the nickname “the empire in which the sun never sets.” This massive cathedral is adorned with a large number of fabulous paintings, including what could be regarded as the greatest painting in all of Belgium—the “Adoration of the Mystic Lamb” by Jan van Eyck. This huge altarpiece is made up of 24 different panels. 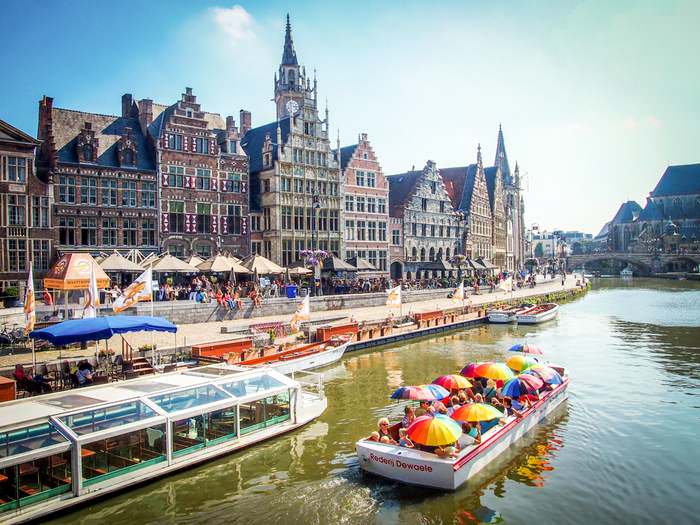 Graslei, the most stunning medieval waterfront in Europe

Occupying both sides of the Leie River, the Graslei and Korenlei is possibly the most gorgeous medieval waterfront in Europe. The Graslei is the most spectacular of the two—best seen from the Korenlei—and consists of a row of magnificent guildhalls. This was actually Ghent’s very first harbor; nowadays, it’s a hugely popular place to hang out for locals and tourists alike. Particularly on sunny days, the waterfront is filled with people sunbathing, reading, talking, nursing a drink or just enjoying a great meal at one of the waterfront taverns. A boat ride is also a fun way to explore the canals of Ghent and learn a little about the history of the city. Book your Boat ride in Ghent here! 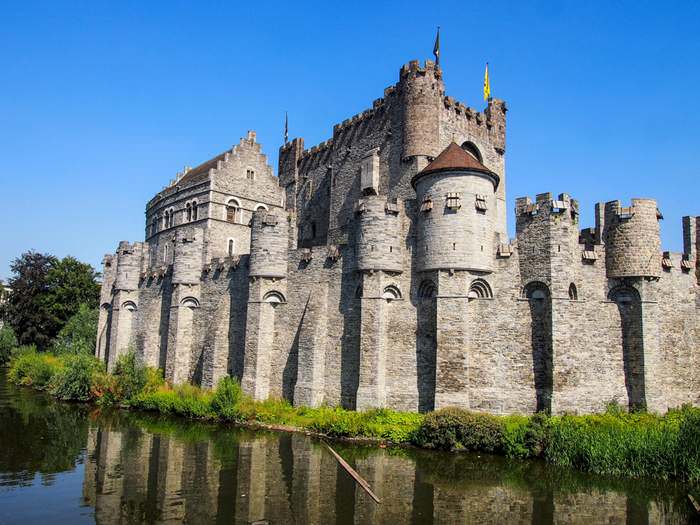 Dating from the late-12th century, the Gravensteen, known as Castle of the Counts in English, used to be the seat of, well, the Counts of Flanders. Later on, it was used as a prison, courthouse and storage place. It has now been restored to its former glory and houses a superb medieval museum, which wouldn’t be an actual medieval museum if it didn’t include a large exhibition of torture devices. The central keep can be climbed for rather extraordinary views over the city. 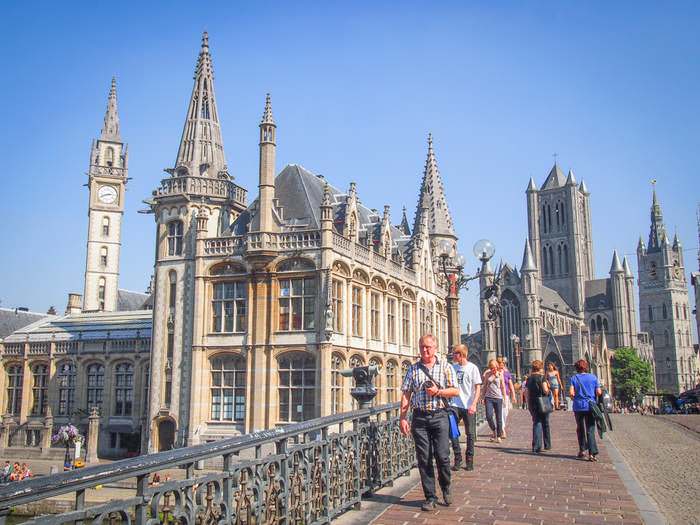 St. Michael’s Bridge is where all of the above-mentioned attractions in Ghent come together in one perfect postcard view. I honestly don’t think there’s a greater medieval scene found anywhere else in the world. The view, taking in the Graslei and Korenlei, St. Bavo’s Cathedral as well as St. Nicholas’ Church (not included here, but also definitely worthy of a visit), the belfry and the Gravensteen. Truly, this is a view that no visitor will ever forget.

Top Attractions in Ghent Belgium was written and photographed by Bram Reusen for EuropeUpClose.com

Really loved reading your article and your photos are wonderful.