The city of Nîmes is located in Southwest France and is the capital of the Gard Department in the Cévennes Region. Among tourists, it is best known for its well-preserved Roman structures. The most famous of these is undoubtedly the Arènes de Nimes, an amphitheater that dates back to Roman times, first century A.D. An impressive structure, it has an area of 133m/146yd by 101m/110yd in area and, in certain places, up to 21m/69ft high. The façade is comprised of two levels of sixty superposed arches and an attic, separated by a sturdy cornice. Around the top, stones with holes were positioned so that long poles could be placed over the arena. Next, a large canvas canopy was attached to them in order to give protection against the sun and bad weather. 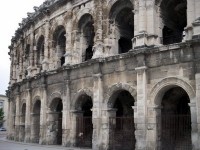 The seating capacity is 24,000 and the crowds who thronged to the amphitheater were able to exit via 124 doors after the spectacle of the day finished. During Roman times, spectators enjoyed both gladiator fights and Venatio (animal hunts) in the amphitheater. The “half-time show” at these events was typically a public stoning of condemned criminals. However, throughout history, the arena has not always been used for spectator sports. In the fifth century, the Goths converted the arena into a fortress, and in the Middle Ages, it served as a knight’s castle and then was temporarily home to modest dwellings and a chapel for around 2,000 people. 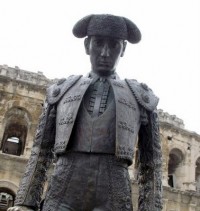 Now the Amphiteather is used for bullfights (a very popular pastime in the region), live concerts, and private events (including weddings, festivals and conferences). Over the years, the Arènes de Nimes has welcomed artists such as U2, Metallica, Nine Inch Nails, Jason Mraz, Bono and Seal. The site is currently managed by an organization called Culturespaces, which has set up many educational stops (including small museums dedicated to bullfighting and gladiators on the main level) throughout the amphitheater. Around 8 euros gains you admission to the amphitheater as well as an audio guide that takes you through over 25 stops throughout the site. You have complete control over your visit, since the audio guide allows you to punch in various codes depending on what you wish to learn about. Though I only spent an hour exploring the Arènes de Nimes (due to a cramped travel schedule), I could have easily spent several hours here learning about the gladiators and the culture of bullfighting. Even if bullfighting and gladiators aren’t your thing, one can’t help be impressed by the rich history of this celebrated cultural site. If you find yourself near Nîmes someday, I highly recommend stopping by.