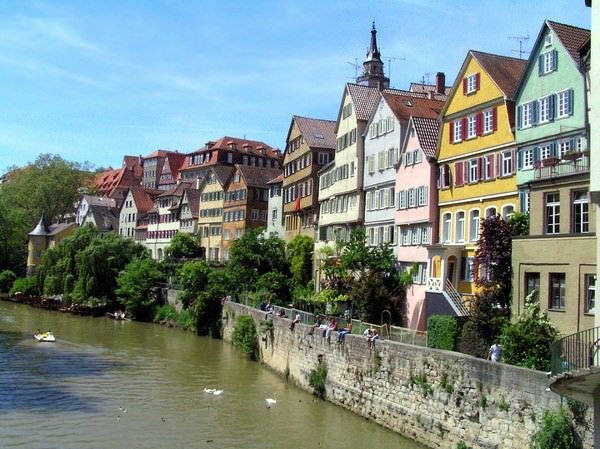 The Neckar on a Sunny Day in Tubingen

When many think of Germany,  thoughts of racing down the Autobahn and throwing back a cool and cloudy Hefeweizen in a biergarten while wearing lederhosen and hungrily devouring Bratwurst like Henry VIII devoured wives, quickly come to mind. But touching the fringes of  Stuttgart, the home of Porsche and Mercedes, is a place to nurture the more sensitive side of the human beast, the university town of Tübingen.

Outside of Germany, Tübingen is an unknown “where-ingen” in a sea of “–ingens” somewhere south of the country’s motor city. To Germans, especially those from the state of Baden-Württemberg, Tübingen is a desirable city steeped in intellect and history located on the banks of the Neckar River – even the center of the Swabish universe as the Mittelpunkt von Baden-Württemberg reminds.

Over the ages, many soles have clicked and clacked across the pristinely laid cobblestones of an altstadt (old city); providentially mostly spared from Allied bombing during WWII.  For example, some of Germany’s greatest poets and thinkers, such as philosophers Hegel and Schelling, and scientists Alzheimer and Kepler, have at one time called Tübingen home. A few of the same locales that inspired and sated Germany’s revered artists and great minds still exist today, allowing visitors to slip back in time to experience Tübingen as those who came before once did.

What to See in Tubingen

One of the first sights upon entering Tübingen is also one of its most famous, the fairytail  Hölderlinturm (Hölderlin Tower).  The small, fairytale tower was where the mentally ill poet, Friedrich Hölderlin, lived out the last of his life. Overlooking the water, Hölderlin’s centuries-old residence transports guests to a more peaceful place in time, tucked away from today’s hectic and over-connected world.

Tübingen’s altstadt is one of the best preserved altstädte in the country. The Stiftskirche’s bell tower – open to visitors – is a beacon peeking out over the half-timbered houses, luring locals and guests to its surroundings. The Stiftskirsche’s seminary shaped and molded the philosopher Georg Hegel, Hölderlin, and their friend and philosopher, Friedrich Schelling. The welcoming doors to this 500-year-old sanctuary also serve as a marker, where across the way, philosopher and writer Johann von Goethe lost his lunch in such a spectacular way, a sign hangs above the spot to commemorate the wondrous event.

Tübingen offers the Alter Botanischer Garten as refuge from life’s everyday stresses. Located adjacent to the altstadt, visitors, students and locals come here to play Frisbee, picnic, or lounge on a bench or lawn.
Located between the streets Stadtgraben and Wilhelmstraße
72072-Tübingen.

German cemeteries are often horticultural works of art – meticulously manicured and cared for – and the cemetery of Tübingen is no exception . Alongside memorials to significant Tübinger people, lays the final resting place of one of the university’s most prominent alumni, Friedrich Hölderlin. Small and located just on the outskirts of the altstadt, visitors can easily walk over and pay their respects.

To combat the country’s brain drain, Tübingen hosts some unique events of a less intellectual nature. During the summer, Stocherkähne (punt boats) slowly move along the Neckar, transporting passengers up and down the sleepy river. One Thursday at the beginning of  June though, the Neckar River becomes a battlefield of wacky-dressed punters in the annual Stocherkahnrennen(Punt Boat Regatta.) Tübinger line the Neckar Mauer’s (wall), best seats along the river, to watch the joys of victory and the agony of defeat – in this case drinking down cod liver oil and having it return from whence it went in front of a crowd of thousands.

In September, Tübingen opens its gates to welcome vendors from its sister cities, Umbria and Aix-en-Provence, for the annual Umbrisch-Provenzalischer Markt (the Umbrian-Provençal Market.) Here, visitors indulge in choice French and Italian wares and food, particularly great cheeses and wine.

Where to Imbibe in Tubingen

The tiny streets of Tubingen

Most creative geniuses were known to indulge in a liquid lunch or two. One place considered the favorite haunt of Hegel and still beloved by the locals today is Gaststätte Boulanger. Not much to look at to the point that people might just walk by it, Boulanger has a welcoming and relaxed atmosphere in which to spend time with friends, or thoughts. But since the Schwäbisch are thrifty, auch mit wörter (also with words), should a rare conversation ensue, they will still most likely not be buying the next round.

For authentic German cuisine accented with a frothy home-brew, head to the Neckarmüller Gasthausbrauerei. Boasting the largest Biergarten in town (currently under construction), the Neckarmüller serves traditional food favorites such as Spätzle (a noodle dish), or Maultachen (a large ravioli-esque food.) To help wash it down, enjoy a fresh beer or three. Haus brews cost 3€ a half-liter and entrées range from 7 to 12€.

An experience unique to this corner of the world is the Besenwirtschaft, a place where local producers can seasonally sell the fruits of their labors – wine – and a couple of dishes, in particular Flammkuchen and Maultauchen, without needing a liquor license; typically within a homier setting than a bar. The wine may be barely drinkable but the friendly atmosphere and economical prices of 1.50€ per glass to 8.50€ per liter, makes the Besenwirtschaft a must-do stop for the non-German traveler.

Where to Eat in Tubingen

Food is the mirror into a culture and its people. Schwäbisch cuisine, the food typical to the southwestern corner of Germany, is simple, hearty and heavy.  To gorge on said hearty, authentic delicacies, like pork roast with Spätzle or sausage salad, step into the Wurstküche where the menu is listed first in Swabish, the local dialect, then German, then English.  Like meat and bring an appetite, as a giant salad is almost the only veggie option and the portions are huge!  Meals average about 15€.

Rumor has it that while at the Weinstube Forelle, Goethe declared that life was too short to drink bad wine. Taking this declaration very seriously, Forelle offers diners a broader wine menu than otherwise found in town while serving high-end variations of classic Swabish dishes, such as roast beef with red wine and onion confit or wild boar with mushrooms and artichoke polenta. Entrees range from 10 – 20€.

To sleep central and well, the Hotel Hospiz, has comfortable rooms with a touch of home including bath, internet access and breakfast for 105€ – double occupancy.

More pampered accommodations are found at the Hotel Krone near the Neckar. Rooms range from singles to suites, all including breakfast, with double rooms ranging from 139 -1 59€ per night.

Located directly on the Neckar, Hotel Domizil caters to both the business and leisure traveler with standard rooms and suites, conference rooms and a fitness and wellness center. Double rooms range from 133 – 143€; pets are welcome!

Thousands of souls have wound through Tübingen’s streets, taken in its landmarks and reveled in the lives once lived in the same buildings and shops. The almost island-like isolation from the rest of Germany and even the other residents is refreshing at times, allowing for more opportunities to relax than in a more “stimulating” city.

Written by and photos by Nichole Martinson for Europeupclose.com

Hope to visit April 13 2010 for a few days. Anything new since your last visit?

i love tubingen - it's one of my favorite cities in germany. thanks for sharing this!!