Have you ever wondered who and what inspired the German brothers Grimm, who wrote the fairy tales we loved as children? Germany’s fairy tale cities are varied in location and size, and they are all are worth a visit to rekindle the magic of our childhood. So, pack your bags and don’t forget to read the fairy tales again before you go – as you might need some advice if you encounter the big bad wolf ! 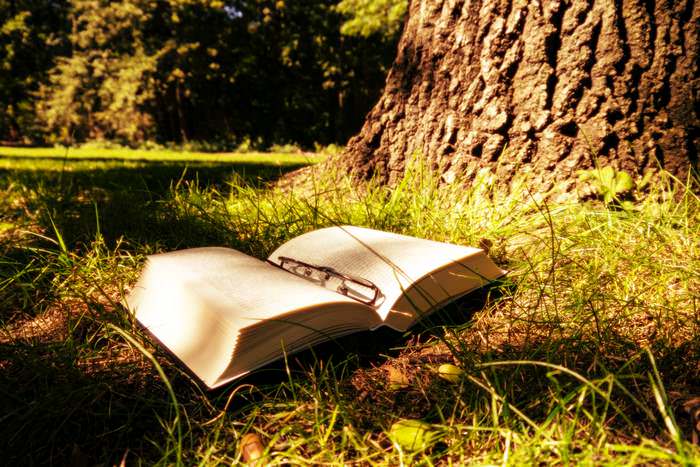 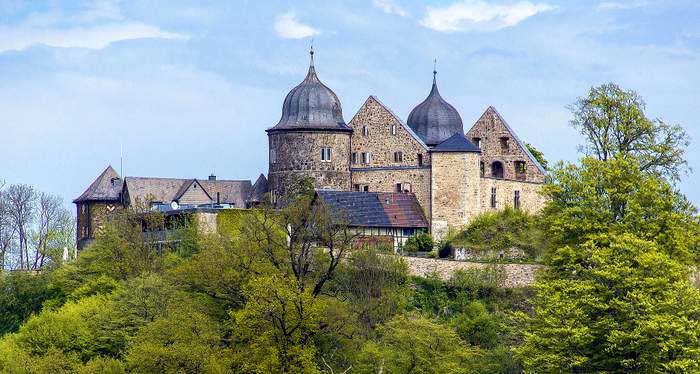 If you always loved the story of The Sleeping Beauty – you must plan a visit to Sababurg, a small town in the Reinhardswald. The Reinhardswald was developed on a range of hills which are covered with a dark forest in central Germany. The “Sleeping Beauty” castle of Sababurg has a beautiful wildlife park and, today, the more than 675-year-old castle houses a romantic hotel, a restaurant and a café, as well as a civil registry. So, you can actually stay the night in the Sleeping Beauty castle! 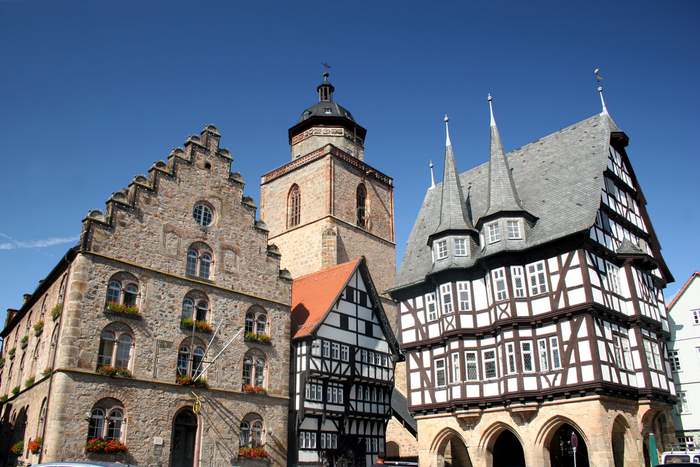 The charming town of Alsfeld houses the Fairy Tale House

In this second of Germany’s fairy tale cities, you can actually make a stop at Fairy Tale House, built in 1628. It is home to a fabulously kitschy collection of room settings featuring life-size mannequins and various models. That includes the wolf wearing grandma’s nightdress, the stove into which Gretel pushed the evil witch, Rapunzel, Cinderella and so many other fairy tale characters. 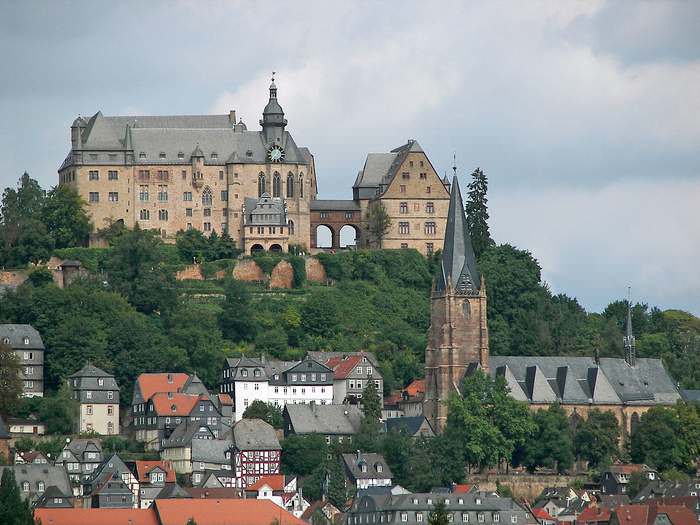 The brothers Grimm both attended the University of Marburg where they developed a curiosity about German folklore.It was here where they began a lifelong dedication to collecting German folk tales. Marburg’s castle is believed to have been an inspiration for another widely popular fairy tale – Cinderella. The town itself is dominated by its magnificent Gothic castle-palace crowning the hill above the River Lahn. 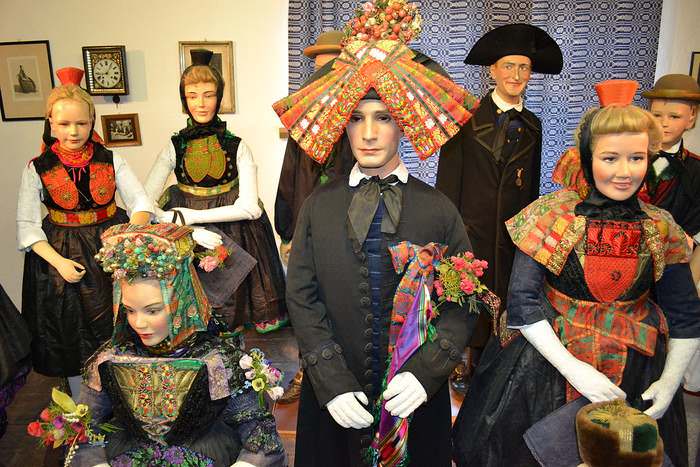 Traditional Wedding Costumes at the Museum of the Schwalm, in Schwalmstadt one of Germany’s fairy tale cities

The Schwalm is considered the birthplace of some of the most popular fairy tales such as Little Red Riding Hood. Look for the Schwalm region’s Fairy-tale Costumes at the Museum of the Schwalm in Schwalmstadt-Ziegenhain. The museum also displays historical and cultural artifacts of the region. 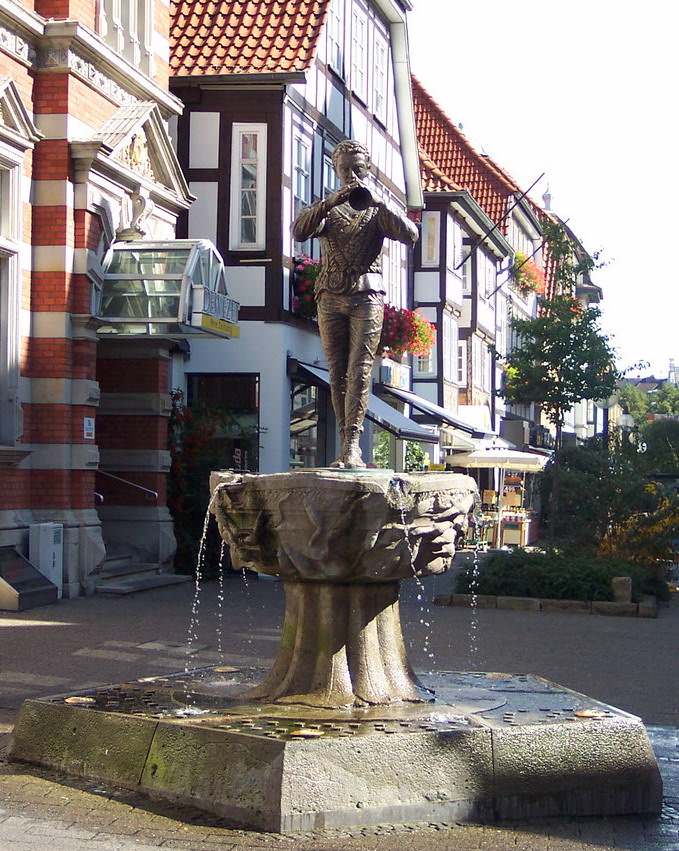 A fountain in Hamelin commemorating the tale of the Pied Piper

The town of Hamelin brings to mind the German folk tale of the Pied Piper. The pied piper was a rat catcher who lured the town’s children away never to be seen again. Here you can visit the rat catcher’s house and take a tour at the old Glockenspiel at the “Hochzeitshaus” (Wedding House) that reenacts the tale of the Pied Piper. To commemorate the tale you can enjoy the cute rodent shaped cookies from the local bakeries. 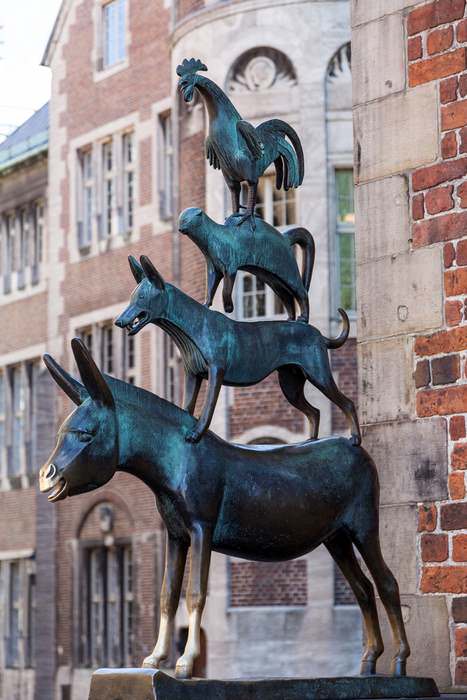 A commemorative sculpture of the Bremen Town Musicians

And, of course, we can’t forget to mention Bremen! This, the last of our list of Germany’s fairy tale cities is home to the tale of the Bremen Town Musicians, the intelligent animals that outsmarted the thieves. Bremen is also a major cultural and economic hub in northern Germany. Bremen boasts a plethora of historical galleries and museums, from historical sculptures to major art museums. And, be sure to visit the Übersee-Museum Bremen.

Re-awaken your childhood memories with this tour of Germany’s fairy tale cities.

Written by Staff for EuropeUpClose.com

What amazing places! We went through Germany so quickly two years ago that we missed soooo much. Will have to make another trip to see all the great small towns.

so lovely! Would love to visit them all!