Toulouse boasts many wondrous sights, but the biggest and most famous is the enormous Romanesque Basilica of Saint-Sernin. The huge brick and stone structure was begun in the 11th century to serve the crowds of pilgrims on their way to Santiago de Compostela, in Spain.  It’s 115 meters (377 feet) long, 64 meters (210 feet) wide, and 21 meters (68.8 feet) high, the largest in Europe, if not the world. 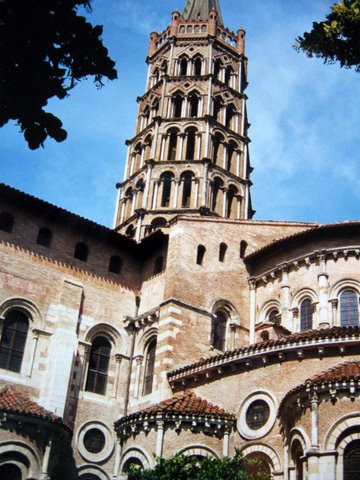 Why was this site so important? It all started around 250 C.E., when the first Bishop of Toulouse, Saturninus, died as a martyr (his was a bloody and miserable end—he was tied to a bull and dragged down stone steps because he refused to pay homage to the local gods). His body was buried, but he was well remembered, and early in the 5th century his remains were dug up and placed in a church built on the present basilica site. He became known as Saint Sernin, and over time the Saint Sernin church became an important stop on the pilgrimage road to Santiago de Compostela.

Pilgrims flocked to the church not only to venerate the saint, who now lies in a baroque sarcophagus, but all the other saintly relics that were sent to rest here. They lie in chapels and two levels of crypts, along with a piece of the True Cross, which is in an enameled copper reliquary made in the 12th century. Some of the ancient pieces of religious art are superb—literally museum quality for their artistry and historical value. In fact, a few have been placed in museums. 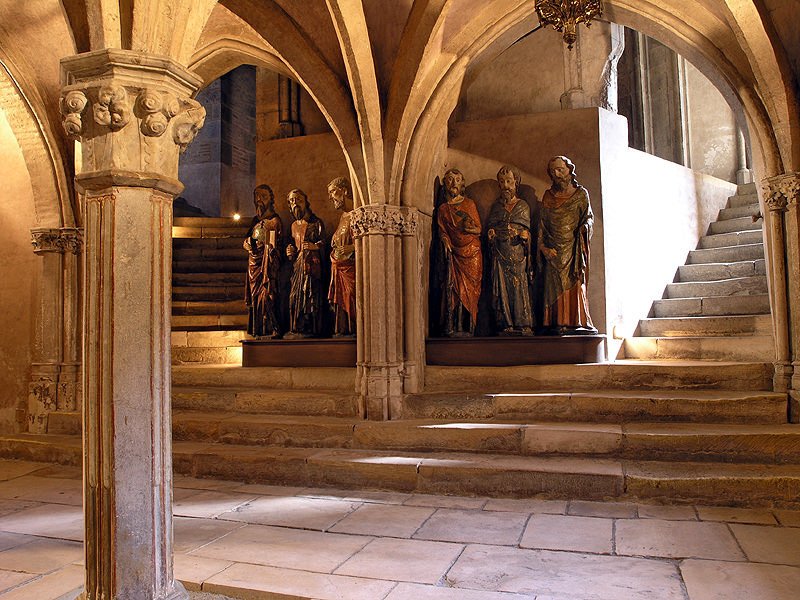 Over the centuries, parts of the church were destroyed, remodeled, and redone again. That’s the history of the impressive Romanesque church visitors see today, a UNESCO World Heritage Site built of red brick and white stone. It has a five-tiered bell tower, lighted at night. Inside are a huge barrel-vaulted nave and side aisles, gilded ceiling frescoes, and fabulous old carvings and sculptures with religious themes. There’s a splendid pipe organ, constructed in 1888. The whole place is awe-inspiring and well worth a visit to admire the art and craftsmanship and feel the weight of history. 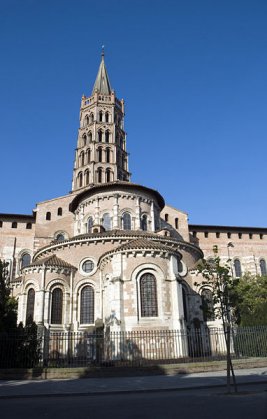 A nominal fee is charged to enter the apse and crypt, and they are closed on Saturdays. The main church is open daily.
After a tour, when it’s time to step back into the sunshine, it is pleasant to walk along rue du Taur to Place du Capitole, the heart of the city. Along the way and in the arcades of the square are outdoor cafes where you can take a break and relax with a drink and a snack. You’re back in the present day.