The Camino de Santiago or ‘Way of St James’ is a pilgrimage to the Cathedral of Santiago de Compostella, a small town in Galacia in western Spain. Legend has it that the remains of Jesus’ apostle St James were shipped from Jerusalem upon his death and buried beneath this site. 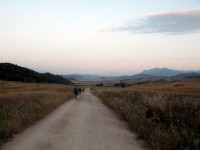 In medieval times, Christians from all over Europe made the journey to Santiago in order to atone for their sins. Evidence suggests, however, that it was a Pagan and Celtic pilgrimage before this time. While it is still closely identified as a Christian pilgrimage, people today walk it for myriad reasons; as much about leisure, challenge and sightseeing as it is about spirituality. 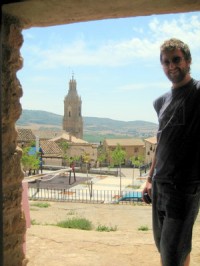 I met a lanky American hippy in Edinburgh just days before my own sweaty, Spanish ordeal. For four weeks he had plundered his way across the Camino, and was now rugged, dirty and sun-glazed. Listening to his recounting of magical stories about traipsing through lush vineyard and desert tracks, viewing stunning peaks and visiting Hemingway-frequented villages atop foothills in the middle of nowhere, I became spellbound. Seizing the day, I booked a flight and left for Spain the next morning.

Though I had no regrets about such flippant spontaneity, I really hadn’t weighed the implications of carrying a pack full of winter clothes and a laptop computer around the far reaches of Spain. Plus, in my haste, I’d neglected to pack even the most basic necessities.

My advice for those wanting to complete the Camino is pack light, be prepared and plan as much as you can in advance.

While the pilgrimage can take on a number of different routes, this guide refers to the most commonly walked path ‘Camino Frances’, beginning in either the French town of St. Jean Pied De Port, or the Spanish town Roncesvalles, 25km further along. 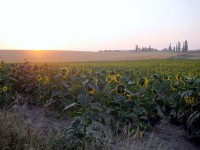 The walk from St Jean is a largely uphill endeavour and the hardest one day walk on the whole trek. Pilgrims who start here are known to possess an air of pride about them, and rightly so – it is an incredibly tough first day.

Roncesvalles (Spain)
Buses run frequently from Pamplona, though you’ll need to take an additional bus from Pamplona to Roncevalles. Or a taxi will get you there for around 40 – 50 Euro. Buses from Barcelona and other major Spanish hubs run regularly and direct to Pamplona.

Give yourself enough time to walk comfortable daily lengths, with enough rest days to allow your body to recuperate. Many people I met walked the whole trail in under 4 weeks – some did it in 26 days, walking around 30km each day. Many would consider this madness. I recommend that you give yourself around 5-6 weeks to soak up the surroundings, absorb the experience and reach Santiago in style.

For many, even within this time frame, the entire trek is too much to complete in one hit. Many pilgrims commence their walk further down the track at towns Burgos, Leon, or from Sarria, 120km from Santiago – the minimum accepted distance to be eligible for the Compostella.

I walked through early July and the summer heat was brutal. Spring is a nice time to take the trek, so perhaps aim for March – May for your own trek.

The Camino is well established and every town has cheap ‘Refugios’ and ‘Albergues’ – pilgrim hostels with bunk beds, bathrooms and kitchen facilities. These differ in style and size depending on the town. Bigger cities and towns will have more; smaller ones might only have the one. They generally cost around 3 – 10 Euro. Some will even offer free accomodations! 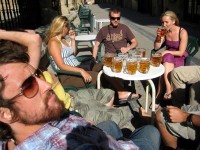 You will need to acquire a ‘Credential del Peregrino’ at the commencement of your walk, costing a couple of Euro. This is a small, passport style passbook, basically your license to walk the Camino and be accepted into the Albergues. You receive a unique stamp at each Albergue, and come the end of your trek you’ll have a very colourful, impressive looking credential.

Albergues will accept you for one night only. They generally open around 4 in the afternoon, close their doors around ten at night, and move pilgrims along at around 6 or 7 in the morning.

Most towns, especially the larger ones, have supermarkets and stores in which to buy supplies for meals. However, after walking for eight or ten hours, the last thing you’ll probably feel like doing is cooking. Nearby hotels and pubs capitalise on the pilgrim market with ‘Peregrino Menus’ for around 8 to 10 Euro – usually a sumptuous three-course meal of bread, appetizer, main and red wine.

Pack light. Seriously! This cannot be stressed enough. Recommended maximum weight is around 6kg. Due to a lack of planning, I walked with an 18kg pack and it ruined my knees – walking so far each day.

– Excellent, worn in, supportive runners or hiking boots – (You will get blisters even if wearing silk.) Break new boots in before you wear them. I saw some of the worst blisters imaginable as a result of people wearing brand new shoes. Keep in mind, you are undertaking a 790km+ trek. Think of your footwear as an extension of your body! 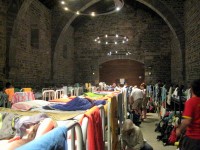 – Sleeping Bag – straightforward enough. Of course, this is something I neglected to pack and was forced to sleep in my beach towel, a most unhygienic ally. Thankfully it was hot and I was so tired after walking each day that I could have slept in anything.

– Torch (flashlight) Depending on how early you start walking each day, this can be invaluable. I left an Albergues one morning at 4am and soon discovered I still had a good couple of hours of pitch darkness. Were it not for a tiny torch I found in my pack, I would have been lost and alone in the middle of nowhere.

– Light rain jacket – Depending on the time of year, less so in summer, it’s probably going to rain sometime during the trek.

– Compeeds/Band Aids/Bandages – You WILL get blisters and sores, even with the most comfortable shoes on earth. Stock up on these little gems so you can keep going with ease. They won’t fix your sore joints and muscles, but they’ll ease the debilitating pain of raw, peeled skin.

The Camino de Santiago terrain is a mixture of forest, field, scrubland and vineyard – mountainous and flat. At times you’ll be walking along endless gravel tracks, other times up mountain peaks, through dandelion meadows and small medieval towns perched on hilltops. Each town or scene you arrive in and pass through is a glorious experience. 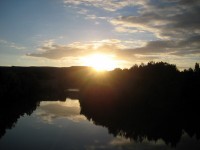 Start early each day and get the body of the day’s walking done before the Spanish sun begins to sear – this is especially true in summer. Spend the afternoon relaxing in the Albergue, chatting with fellow pilgrims and repairing your weary legs.

The trail is well marked with arrows and signs. You will become very familiar with the Camino ‘logo’ – a yellow sideways shell motif on a blue background. The ‘shell’ has a lot of myth attached to it. It is believed that early pilgrims carried a scallop shell on their trek to drink freshwater from streams along the way. It also symbolizes the numerous trails that lead to Santiago. Souvenir shells can be bought at supply stores in Roncesvalles, and select towns along the way.

Upwards of 70,000 people walk the Camino each year. Even if you’re planning to walk solo, it’s hard not to come into regular contact with fellow pilgrims along the way. Be sure to find your own space along the trail, but be open to meeting characters along the way. They’ll make your experience even richer, and help make the difficult parts easier to walk.

There are no rules on how to walk the Camino. It exists for you to experience as you wish, for as long as you like, as many times as you desire.

People from all walks of life, of all ages and nationalities walk the Camino de Santiago. Opening yourself up to this magical experience is sure to yield one of the most breathtaking and positive times of your life.

[...] pilgrims have come to the great basilica in Vezelay to be blessed on their long journey to Santiago de Compostela in Spain, a pilgrimage that was, and is today, a significant spiritual journey. The Basilica Saint [...]

I appreciate your comments.

Perhaps i got that figure wrong?

As for the Albergues, you are quite right - many of them do accept gratis dontation, with a majority of the Alburgue workers donating their own time and service to the many pilgrims who make the trek.

Thanks again for reading

Some will even offer free accomodations!

No, no, no!! Some albergues are donativo - which means a donation - not gratis - which means free. You donation helps to keep the albergue open so that other pilgrims have a donativo place to stay.

Upwards of 70,000 people walk the Camino each year.

More like upwards of 300 000 people walk the caminos each year but not all aim to reach Santiago. Many Europeans walk short sections every year, starting again from where they lkeft off the year before, and might eventually make it to Santiago to earn the Compostela.

Congratulations on finishing with so little preapration! Buen suerte!