Here is the truth about Pamplona’s Running of the Bulls.

There’s a specific hour that only happens on eight days of the year. It takes place somewhere between four and six a.m. in a small Basque town, when morning seems to be starting, yet last night’s party never really ended. 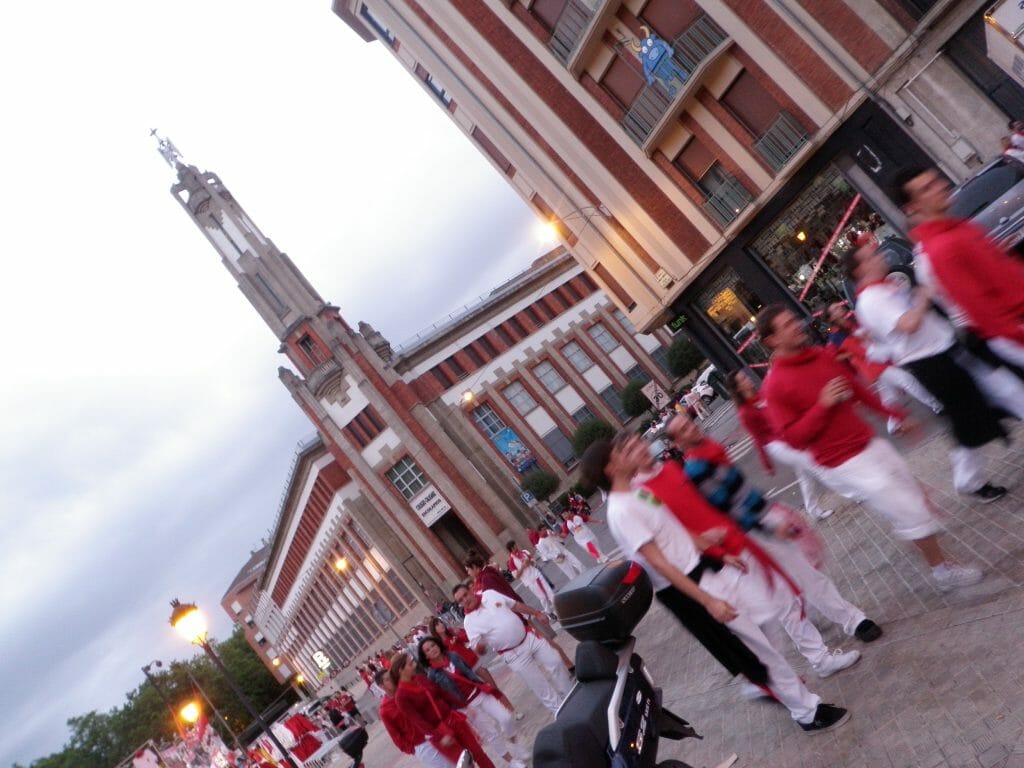 Preparing for the St Firmin Festival

You’ve never seen so much garbage in your life, and the smell of urine is overpowering.

There are lifeless bodies everywhere; boys and men piled on top of each other in stairwells, huddled in corners, sprawled on park benches, surrounded by empty bottles and cigarette packs. The public bus station looks like the meeting point for the apocalypse.

Suddenly, new people appear on the streets. They went home only a few hours ago and have returned, aghast at the havoc wreaked upon the town since they left. Half the people in town are searching for coffee, possibly even wearing a clean set of clothes, while the other half is still drinking, and wearing, sangria; only a fine line of sleep separates the two. 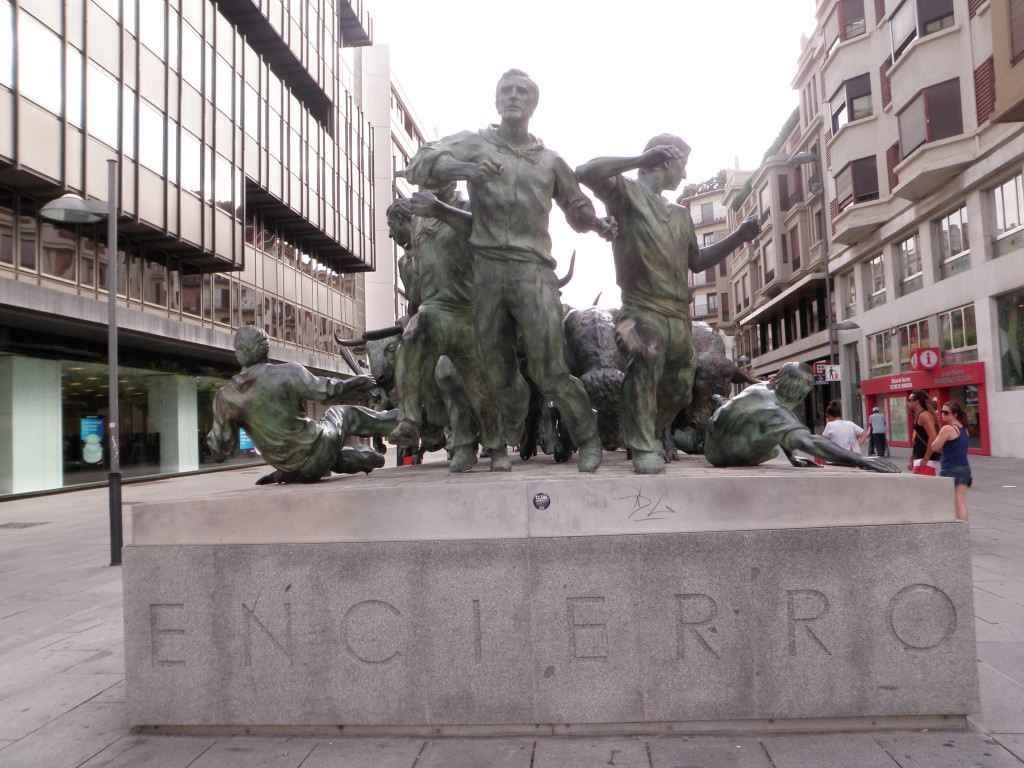 Pamplona statue dedicated to the encierro (running of the bulls)

Time, which lost all meaning overnight, begins to tick-on again. The bars empty out, the bus station clears, and everyone starts to move in the same direction through the dark town. They’re not entirely sure where they’re going, but getting stuck in the wrong spot this morning could literally mean life or death.

The roar of 60 hoofs will mark the change from night to day.

An hour later, all eyes in Pamplona will be on one 848-metre-long track. At one end are fifteen huge animals, six of whom will be murdered that evening, none of them prepared for what the morning has in store. At the other end is a bullring with 20,000 giddy people inside, who can’t wait for the clock to strike eight and the first rocket to be fired. 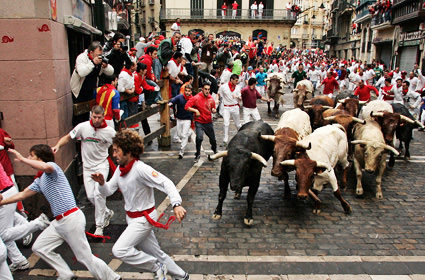 The beginning of 8-day St. Fermin Festival in Pamplona

Like many of the best festivals, its origins are unclear. Saint Fermin is the patron saint of the Navarre region, of which Pamplona is the capital. He was the 3rd-century son of a Roman Senator and the first bishop of Pamplona, and a festival has been held in his honour since the 1500s.

An essential part of most Spanish festivals is a bullfight, and in the early days, the bull minders would walk the animals overnight from the countryside to the bullring. Eventually, the local boys figured out what time this procession would arrive in town, and they started to chase after them. The tradition caught on, and the bull run, or “encierro”, has occurred every year since then, bar two years during the Spanish Civil War. 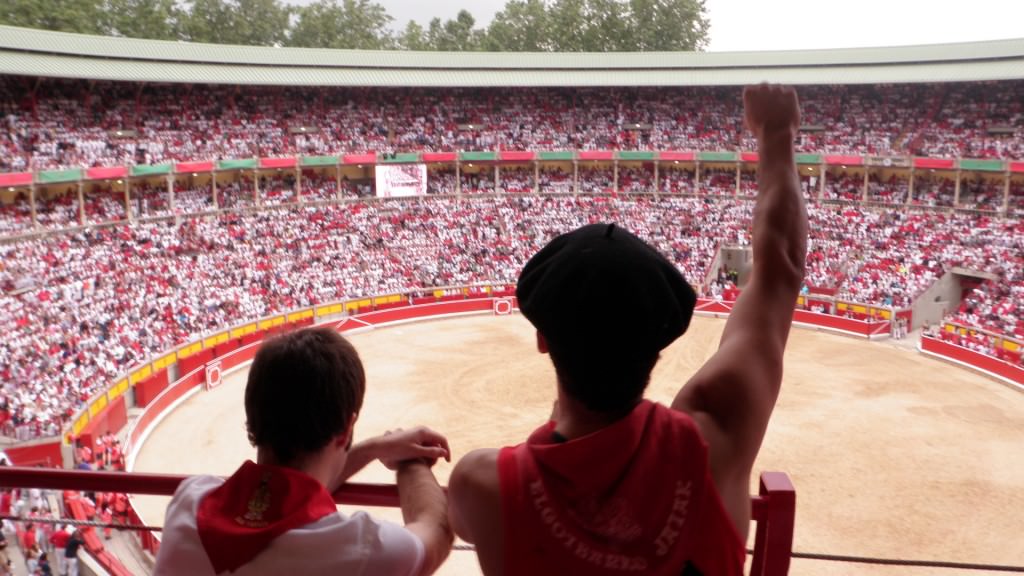 Waiting for the bulls in Pamplona

In the 1920s, this crazy local tradition exploded when Ernest Hemingway wrote about it in his novel The Sun Also Rises, or Fiesta in Spanish. These days, it is a crucial stop on a European backpacking tour, and the population of Pamplona swells from 200,000 to over one million during the 9-day festival.

The bull runs are held every morning from July 7 to 14. On July 6, before the bulls make their appearance, the town throws the wildest party of all: the “txupinazo”, or Opening Ceremony. 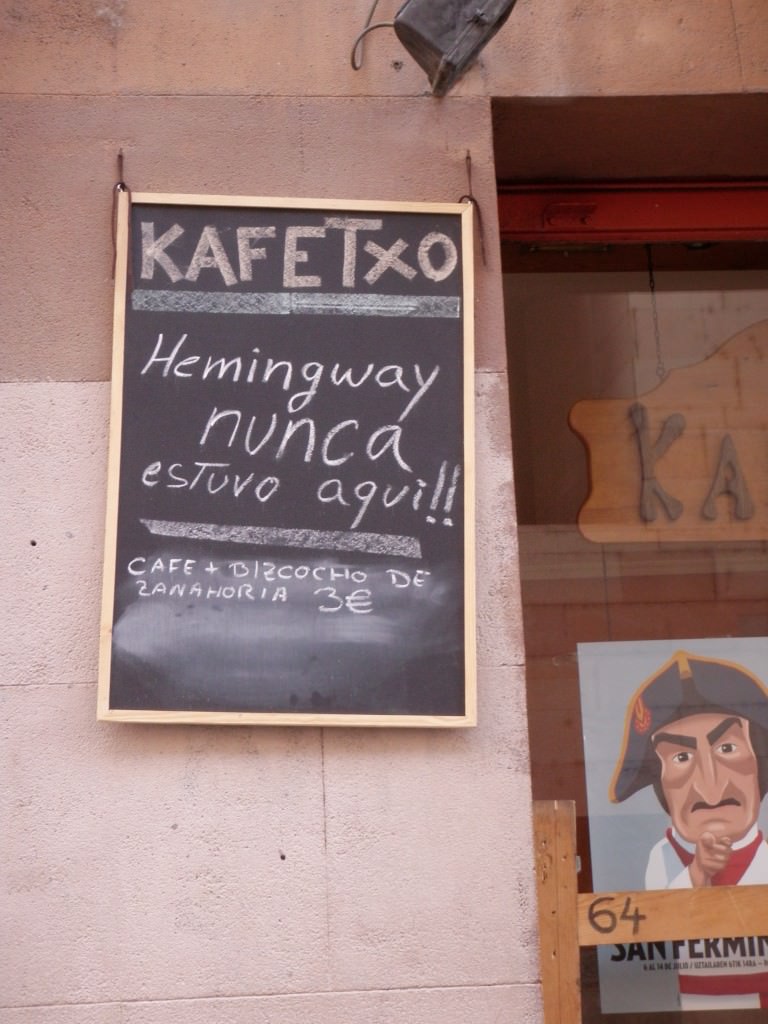 The fiesta is officially launched in Plaza Ayuntamiento. The mayor and his guests stand on the balcony of the Town Hall while thousands of people – decked out in the official San Fermin uniform of white shirt, white pants, and red scarf around their wrist – cheer from below. Giant balloons and banners float above the crowd, and as soon as the rocket is fired at noon, the crowds wave their red panuelos in the air, tie them around their necks, and the party begins. Immediately, the sangria and cava start to fly, along with flour, mustard, and whatever else the masses can get hold of. Glass is strictly banned from the centre of town that day, but drinking and spraying whatever you can buy in a box is highly encouraged. By the time you emerge from the square, you are covered from head to toe and laughing hysterically.

The party continues all day in the tapas bars, squares and taverns across Pamplona. There is a restaurant called La Mejilloneria, in Plaza de la Navarreria, where you shout your order across the heaving bar to a waiter who shouts it to the cook; a plate of mussels, patatas bravas drowned in mayonnaise, or fried calamari. After you’ve gulped them down, you throw the mussel shells and napkins onto the ground to show your appreciation; in Basque country, the messier the bar, the better the food.

Running with the bulls is not for the fainthearted, and neither is the fiesta.

Last year, a friend started an evening on the streets of Pamplona and woke up the next morning in France with no idea how he got there. It is weeklong party where young Spaniards spend the entire night dancing in the streets, singing, shouting and drinking until 8am. They go straight from the bars to the bull run, drink a cup of coffee or a sangria while they watch, and then head home to sleep for a few hours before starting all over again. 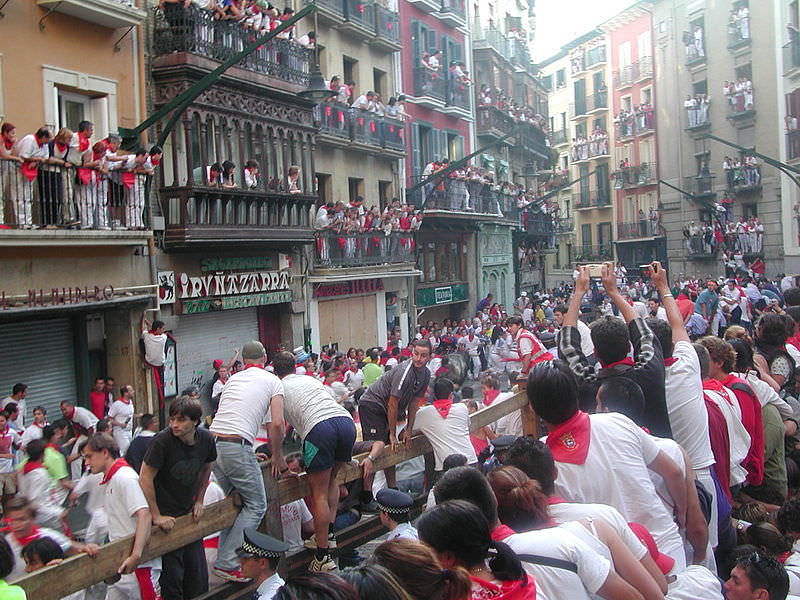 Running with the bulls is not for the faint hearted

But it’s much more than just a party; venture a street or two past the main squares and you’ll find the older locals, the ones who remember what this festival was like before Hemingway wrote a book and the world got smaller.

Tradition says that a man – women are not supposed to partake in the run – must turn eighteen before he runs with the bulls. The local boys grow up watching the event, studying the track, devising a strategy long before they ever run.

These boys become the men who don’t run at the sound of the first rocket, which indicates that the corral has been opened. This is when most of the tourists take off. Nor do they run after the second rocket, which is fired after all of the bulls have left the corrals and are on the course. The local men only start running at the sight of a bull.

After football, bull festivals are the second-most important event in Spain. Spaniards admire and honour the animals who participate, and if anyone grabs their horns during the run or tries to wrestle or pull its tail in the bullring, a pack of Spanish vigilantes will descend to teach them a lesson. The six bulls will be fought and killed in the bullring later that evening, but they are to be treated with the utmost respect until then.

Six bulls, a different breed each day, take part in the encierro, plus nine oxen to guide them from behind. When bulls run together in a pack, they can easily complete the course in three to four minutes with no incident. But if one gets separated from the others, it gets scared and aggressive. There have only been 15 deaths over the years, but when you see how fast the bulls run, and just how big a horned, 650-kilo animal really is, you will understand why there are 300 serious injuries annually. 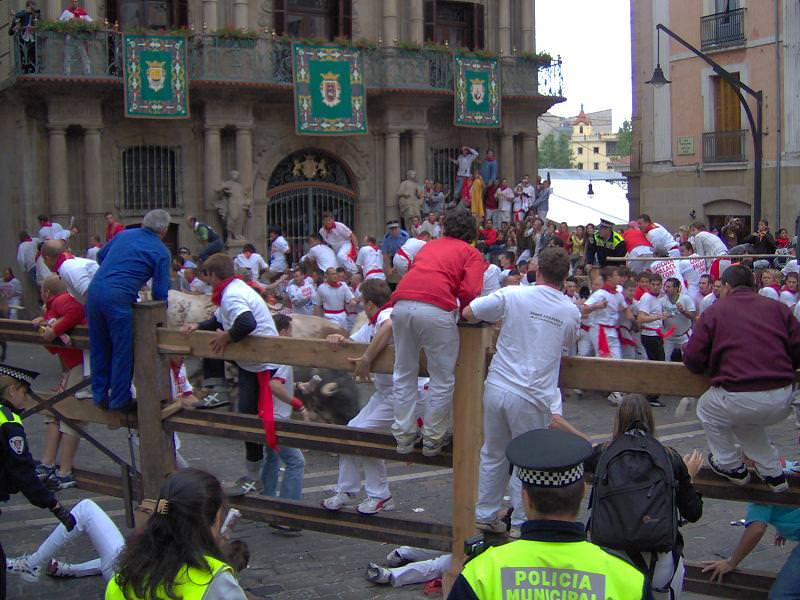 The gates that enclose the track are erected each morning around 6:30, so anyone who wants to run packs themself into the Plaza del Ayuntamiento early to make sure they get a spot. The police are ruthless; if you are carrying a camera or bag in your hand, if you don’t have proper footwear, if you are too drunk or unfit, if you’re a girl, or if they deem there to be too many people, they will toss you out before the barriers are closed.

The barrier is made up of two fences; a wooden one to set the parameters of the track – which winds through four streets of the old town from the corrals to the bullring – and a second iron fence, added in the 1800s after several near-disastrous incidents, to make sure the bulls can’t escape into the crowd. 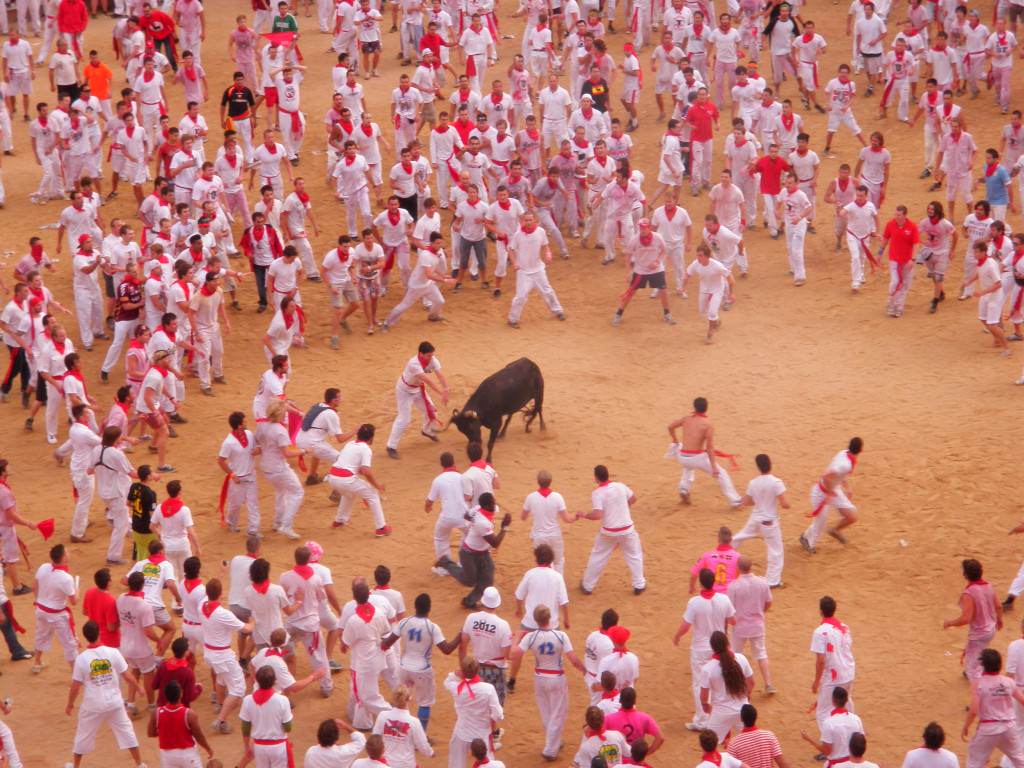 The bulls enter the ring

There are a few tips to make the race safer: if you fall, don’t get up until someone lets you know the coast is clear. Run straight ahead without looking back, but once you’re in the bull ring, move to one side so you’re out of the bulls’ way. And remember that it’s every man, and woman, for himself; when running from a pack of dangerous animals, chivalry does not exist.

While the runners are taking their places, 20,000 people are piling into the bullring at the end of the track. The Plaza de Toros is one of the largest bullrings in the world, and it’s the best place to be that morning. You can laugh at the nervous participants on the big screen before the run begins, watch the entire run as it happens, and see them all burst victoriously into the ring at the end. Most of the tourists arrive into the ring long before the bulls, fist-pumping and jumping with excitement; one of the funniest things you’ll ever see is the locals launching juice boxes, shoes and insults down at them to shame them for their cowardice. 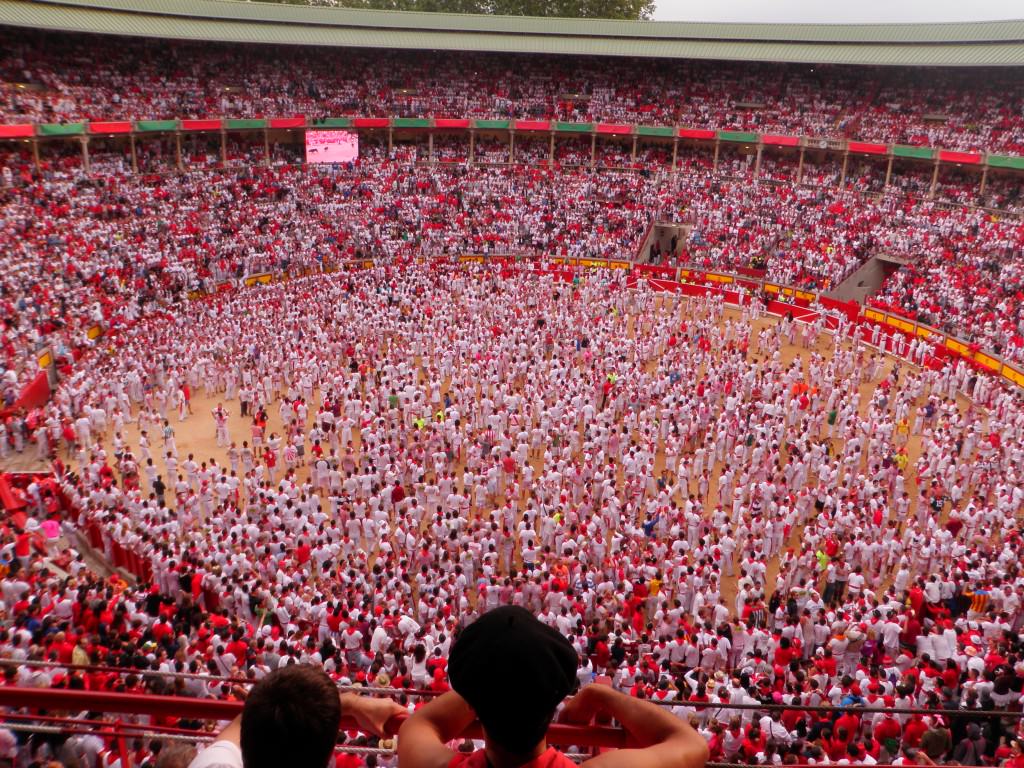 When the animals finally burst into the ring, the crowd, which was already buzzing, goes wild. The bulls and oxen run straight out, and then six baby bulls are brought in, one by one, for a few minutes each. The sandy ring becomes a bright mass of excited people in white and red being chased and flipped in the air, while the spectators in the stands above cheer for the bulls.

The fiesta stretches into the evening of July 14 and by then, the crowds have slimmed and the locals are left to enjoy their fiesta. The closing ceremony is a more subdued event than the opening; everyone gathers one last time in Plaza Ayuntamiento with candles, giving thanks to San Fermin for another year.

Halfway through this year’s festival, I took an early-morning bus from Pamplona to Bilbao, a gorgeous Basque city two hours away. As soon as we pulled into the station the young Spaniards on the bus, still in their whites and reds, cheered. It was as though they hadn’t been sure they would ever make it there.

The streets in Bilbao were clean, people were going to school and work, the air was quiet and so fresh. We had no idea what might have happened at that morning’s run, and we felt that we had left something behind. But the sun had risen, and we, at least, had survived.

This seems like so much fun ken. Terry live a little.

I believe that it is a dangerous endeavor, so I can't recommend it.

Hey Ken! It's been a while. We should link up sometime! I definitely think that you and Barbara would love the festival. Great time with great friends! Haha

Great read, thanks for the info. Should a fifty something couple from rural NSW with a sense of adventure consider participating in said festival ? how does the average tourist survive ?