It’s one of the most dramatic stories in 15th-century Florence. In 1478, the Pazzi, a well-established Florentine banking family, with support from Pope Sixtus IV, the King of Naples, and the Archbishop of Pisa, and others, hatched a plot so daring as to almost appear ridiculous: to kill Giuliano and Lorenzo de’ Medici in order to take control of Florence. On Sunday, April 26, during High Mass in the Duomo, assassins, armed with knives, attacked the two brothers. Francesco de’ Pazzi and Bernardo Bandini Baroncelli stabbed Giuliano nineteen times, killing him. Two armed priests went for Lorenzo, but Lorenzo fled with only a wound and locked himself in the north sacristy. Retribution was swift and brutal; the governing council of Florence ordered the public execution of most conspirators in a very bloody few days. All Pazzi property was confiscated and the Pazzi name destroyed. As a result, the Medici were stronger than ever. 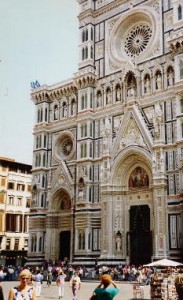 It’s one thing to read about this fascinating failed plot, but quite another to visit the relevant sites to pull us deeper into the story and give us a fresh view of Florence. And so, I present to you the Pazzi Conspiracy Tour, which takes you through the center of Florence as well as to a castle in the hills once owned by the Pazzi.

First, we’ll start at the Palazzo Medici-Riccardi, at the corner of Via Cavour and Via de’ Gori, just north of the Duomo. The conspirators had originally set their sights on this palace to carry out the attack. The Archbishop of Pisa (Francesco Salviati) had arranged a request to have the Pope’s nephew, a Cardinal, visit the palace under the pretense of seeing the Medici’s fine art collection. Lorenzo set up a luncheon for the 26th but suggested they meet at the Duomo for High Mass first. When the plotters found out that morning that Giuliano wasn’t going to be attending the lunch, they quickly switched the site of the attack to the Duomo, where Giuliano would surely be.

Walk down Via de’ Martelli and enter the cathedral of the Duomo, the scene of the crime. It must have been crowded that day because of the number of the Cardinal’s and Archbishop’s “entourage,” who were really armed supporters of the plot. To the left of the altar, you’ll see the doors to the north sacristy, where Lorenzo fled to safety after the attack. 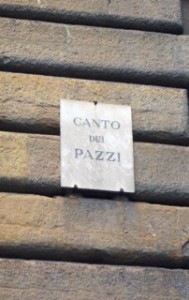 Walk east and take a right on Via Proconsolo. Soon you’ll come to the corner of Borgo degli Albizi. There you’ll see the sign, “Canto dei Pazzi,” which means literally, the “corner of the Pazzi.” A month after the attack, the Medici instituted a law forbidding anyone to mention the name Pazzi when referring to this corner. It’s a wonder why they did not replace the sign, or remove the Pazzi coat of arms that appears on the opposite corner, attached to the Palazzo Pazzi. This palace is also known as the Palazzo della Congiura (“palace of conspiracy”), because it’s likely the conspirators gathered here to hatch their plans. Francesco de’ Pazzi ran here after the attack, bleeding from a stab wound in his thigh.

Continue on Proconsolo and you will pass by the Bargello, where many low-level conspirators were hanged. A more gruesome fate was reserved for those hanged at the government palace, or what we now know as Palazzo Vecchio. 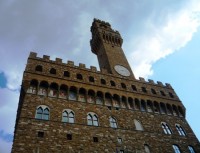 Keep walking toward Piazza della Signoria, past the tourists snapping pictures of Neptune and David, stand in front of the Palazzo Vecchio, and look up. The windows at the top served as continuous gallows during those three days after the attempted coup. The bodies of the major conspirators—Francesco de’ Pazzi and the Archbishop of Pisa among them—were each left dangling by a noose above the raving Medici-loving crowd below. The executioners would sometimes slash the ropes and let the bodies fall onto the piazza, at which point the people would dismember them, beat them, drag the body parts through the street, and place torsos in shop windows. It was a bloody festival. In all, about 100 people were killed in three days.

Take to the Hills 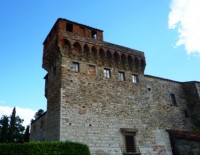 We conclude our tour with a trip out of town. The Pazzi owned a lot of property before the attempted coup. Their 12th-century castle, now called Castello del Trebbio*, sits atop a hill in Santa Brigida and is easily accessible by bus. It is privately owned, but you can visit for a wine tasting and a tour through the rooms of the castle. Legend has it that the Pazzi met here in what is called the “Conspiracy Room” to fine-tune their plot. Notice the Pazzi coat of arms in the courtyard, the one remnant of the Pazzi that the Medici left, out of respect for its creator, Donatello.

*Individual tours/wine tasting at Castello del Trebbio are Tuesdays and Thursdays at 10:30am. Call 335 6550585 for reservations. The castle is accessible by SITA bus.

This story was originally published by The Florentine.