A visit to Augsburg, Germany takes you back in time. There is evidence of settlements along the Lech and Danube Rivers existing at least seven centuries before the birth of Christ. The Roman city of Aelia Augusta was founded in the First Century, and there are vestiges of this city in Augsburg today. During the Middle Ages, Augsburg saw the growth of the Fugger and Welser families with their connections to Emperor Maximilian. And the Renaissance brought new life to Augsburg with the beautiful buildings on famed Maximilianstrasse. Today, Augsburg blends all its past lives into one vibrant and beautiful city. 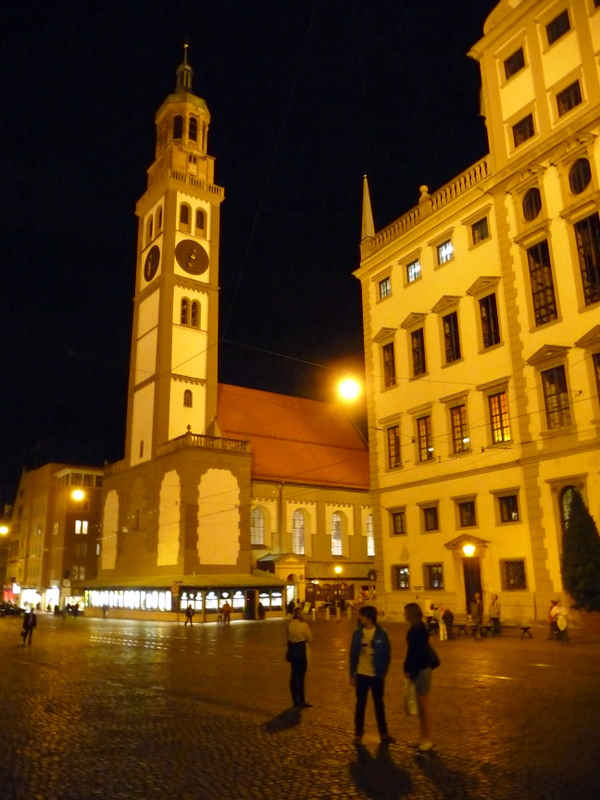 Plan on staying at least two days to get a feel for this historic city. There is so much to see in Augsburg, you won’t be bored staying even longer. As you roam through the city, be on the alert for the city’s coat of arms: the “pine cone”. The pine cone was the symbol of eternity in the Roman times.

What to See in Augsburg

St. Mary’s Cathedral
This Gothic cathedral contains the oldest painted glass windows in the world. These beautiful “prophets windows” were made by the monks of Tegern Lake in 1140.  Another treasure of the cathedral is the four panels painted by Hans Holbein the Elder.

Roman Wall
Just outside the cathedral, is the Roman Wall that reminds us of Augsburg’s beginnings. You will notice the pine cone motif in this excavation. 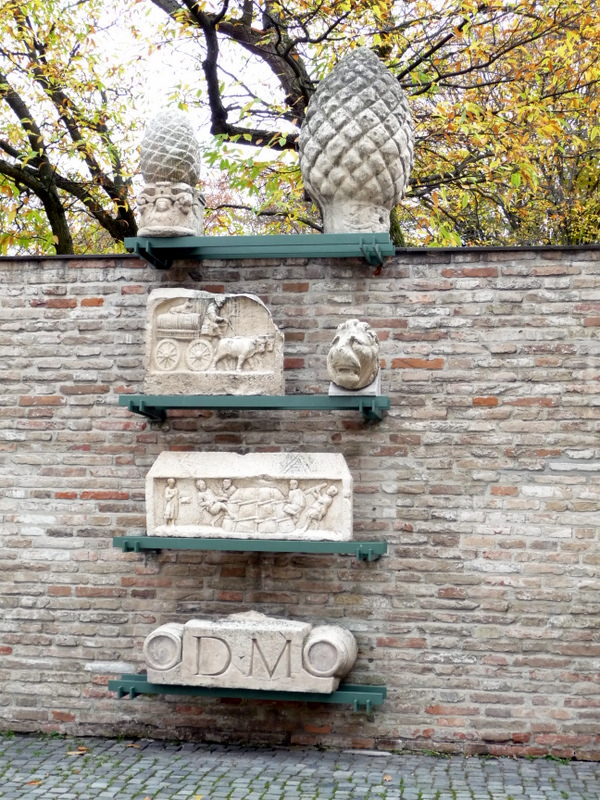 Roman Museum
To see an extensive collection of Roman artifacts and learn more of the history of the Roman settlement in Augsburg, be sure to visit this exciting museum. It is housed in the former Dominican Church of St. Magdelena, built in 1515 and baroquised in 1724.
Römisches Museum Augsburg
Dominikanergasse 15 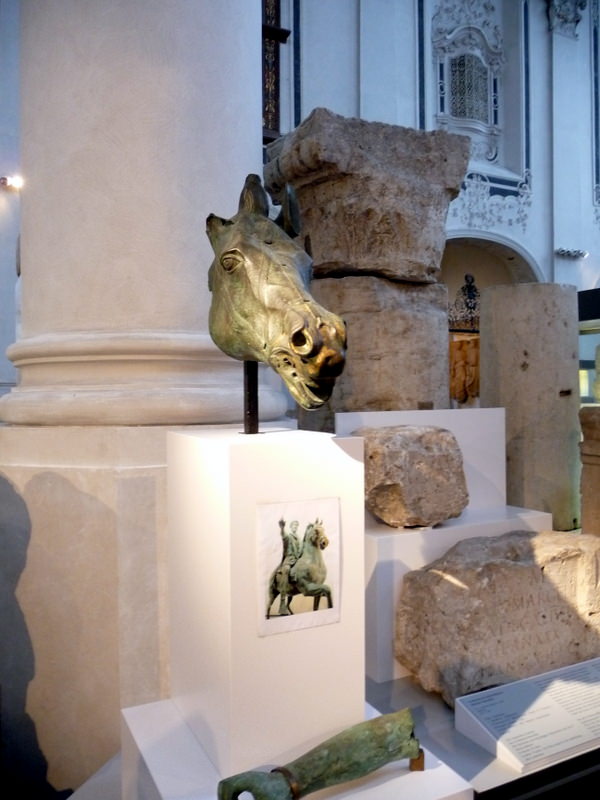 Maximilianstrasse
Considered the most beautiful street in Germany, Maximilianstrasse winds past the Rathaus ( Town Hall) with its Golden Hall and beautifully restored murals, and the magnificent Augustus Fountain erected in 1594 in honor of the Roman founders of the city.

Mozart House
This is the house where Mozart’s father, Leopold was born. It now is the Mozart Memorial Museum, filled with  Mozart memorabalia and history.

Schaezler Palace
This grand palace at 46 Maximilianstrasse was once owned by a famous Augsburg banker. it is considered the most impressive Rococco building in Augsburg. Today, it houses the German Baroque Art Gallery and the State Art Gallery. 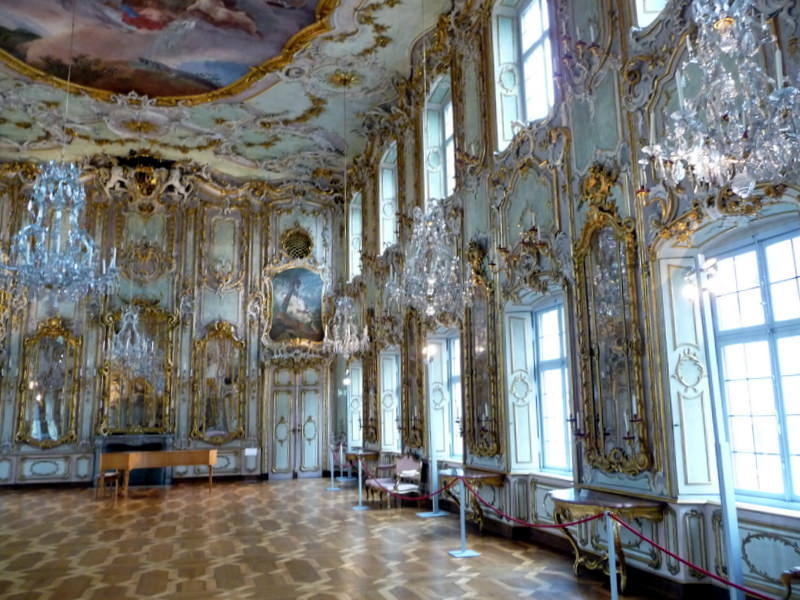 Fuggeri
This “town” was built by Jacob Fugger the Rich, along with his brothers, to house the impoverished Catholic citizens of Augsburg. The village has 52 houses with 104 apartments. The rent -to this day- is a mere 0.88 Euros per year. But renters are also bound to say three prayers a day for the founders. It is a fascinating story and a lovely village. There is a Fuggeri Museum on site where one can learn more of this program.
Mittlere Gasse,
Entrance House Number 14 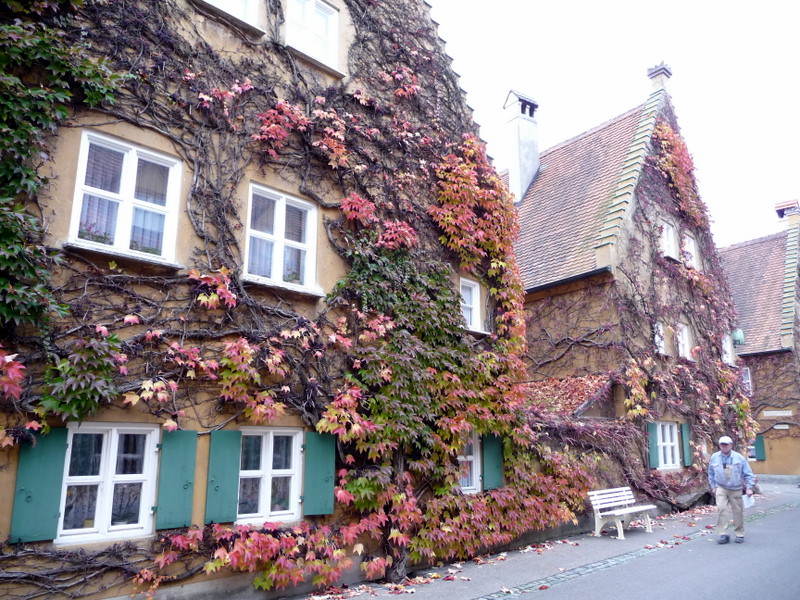 I have just scratched the surface of the many things to see and do while in Augsburg. When we were there last, we went to a wonderful Jazz bar and took in an extraordinary bit of musical theater. Augsburg is a college town with great energy, so you will always find something stimulating to do.

While in the US military service a number of years ago I was stationed a short distance from the city of Augsburg, I never knew as much about Augsburg as what you mention and show here. . A sort of nostalgic feeling, wanting to go back as a tourist and see all the things I missed while stationed there.

I remember a small cafe where I had my first German beer. It was so good. The cafe was called the "Last Chance Cafe". and was located within walking distance of the army base. I wonder if the cafe is still there? I took some German language classes while in the military and now I want to review so as to speak the language better when I eeturn to Augsburg again. Thank you

I hope you do get the chance to return to this lovely town. We wished we could have stayed longer!

You will love Augsburg. It is a beautiful, historic town, with lots to do and see. We stayed at the Augsburger Hof. It is very charming and walking distance to most things, but on the streetcar line as well, so very convenient.

Augsburg is located in Bavaria, just northwest of Munich.

I may be teaching at the University of Augsburg in mid-April and would like your opinion on where I should stay initially (hotel, flat). I won't know until the end of January if I have this position and may have to come for an interview if I am shortlisted.

My main question is: Where exactly is Augsburg? I have lived in Germany before in Ludenscheid/Hagen in Westphalen...but I have never heard of Augsburg. Could you enlighten me? Thanks! Rochelle V. Leggett