Dresden, Germany’s most notable landmark, the Frauenkirche, has a history mirrored in its city. Constructed in the 18th century, the church was destroyed in the firebombing of Dresden during World War II. The reconstruction of the exterior was finally completed in 2004 and it now stands once again as the most recognizable edifice 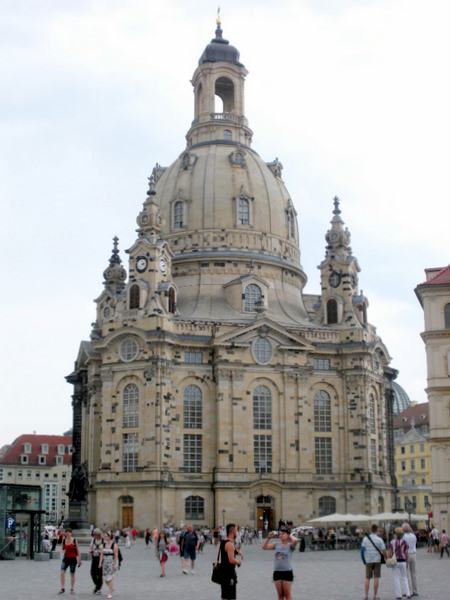 The original Frauenkirche was built between 1726 and 1743 as a Lutheran parish church, despite the predominance of the Catholic faith in the region. George Bähr, Dresden’s city architect, designed the church and its most unique feature, the high dome (called the Stenerne Glocke or stone bell.) The placement of a 12,000-ton stone dome on eight supports was considered an engineering feat for its time. For the next two hundred years, the Frauenkirche dominated the skyline of Dresden.

On February 13, 1945, Anglo-American forces began firebombing the city. The Frauenkirche withstood two days of the attacks before the dome collapsed on the morning of February 15th. The altar was one of the few building remnants left standing in the midst of the rubble. The ruins of the church would remain in the center of the city for the next forty-five years under East German communist rule. Following the end of World War II, some citizens began salvaging and organizing the remains of the building so that a future reconstruction would be possible. In 1966, the ruins were officially declared a memorial against the war and commemorations were held at the site on the annual 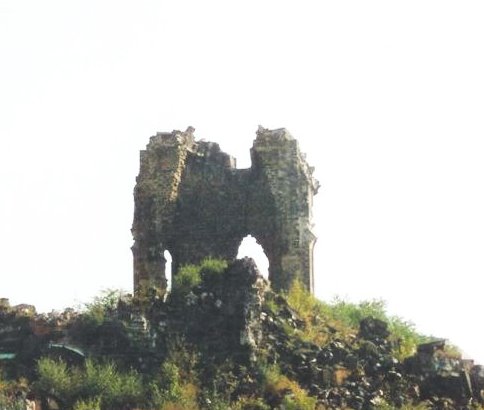 anniversary of the firebombing destruction of the city.

In 1985, the city decided to rebuild the Frauenkirche, but little was done until after the reunification of Germany. In 1990 “The Society to Promote the Reconstruction of the Church of Our Lady” was formed and a large fund-raising campaign began. Reconstruction of the church, which cost €180 million, was made possible by donors, patrons, and bank financing. Reconstruction began in 1994 and architect and engineer, Eberhard Burger, referenced the original plans for the structure from the 1720s. Most of the church, excluding the dome, was rebuilt using original materials with the aid of modern technology. The ruins and rubble which 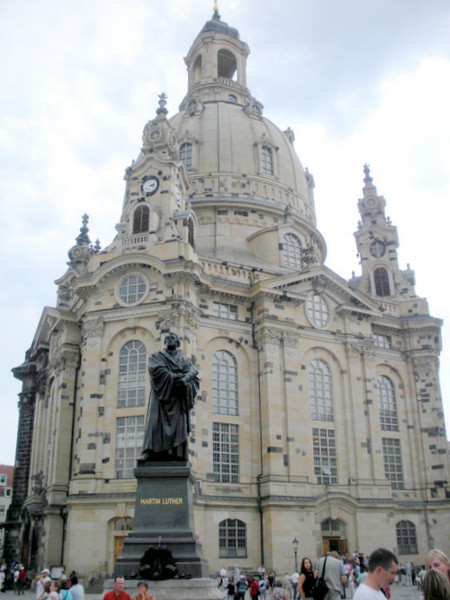 had long occupied the center of the city were carefully analyzed so that each piece of stone would be placed back in its original position. When viewing the completed church, older stones can be easily identified due to their darker hue, a result of fire damage and weathering. In June 2004, reconstruction of the exterior of the church was finalized with the erection of the dome and cross. The following year, the interior was fully rebuilt and the church was consecrated on October 30th.

The Frauenkirche once again stands as a symbol of Dresden, as well as a reminder of the war. It is one of the most popular tourist sites in the city. The Frauenkirche is open daily, though most visitors are encouraged to tour the church Monday through Friday, between 10:00 a.m. and 12:00 p.m. or 1:00 to 6:00 p.m. The church is open on weekends, but hours may be limited due to religious services and ceremonies. Entry into the church is free, though a small donation is encouraged. Photography and video cameras are not permitted inside the church. Volunteer tour guides can answer any questions visitors may have and audio guides can be rented for a small fee. Free-guided tours (in 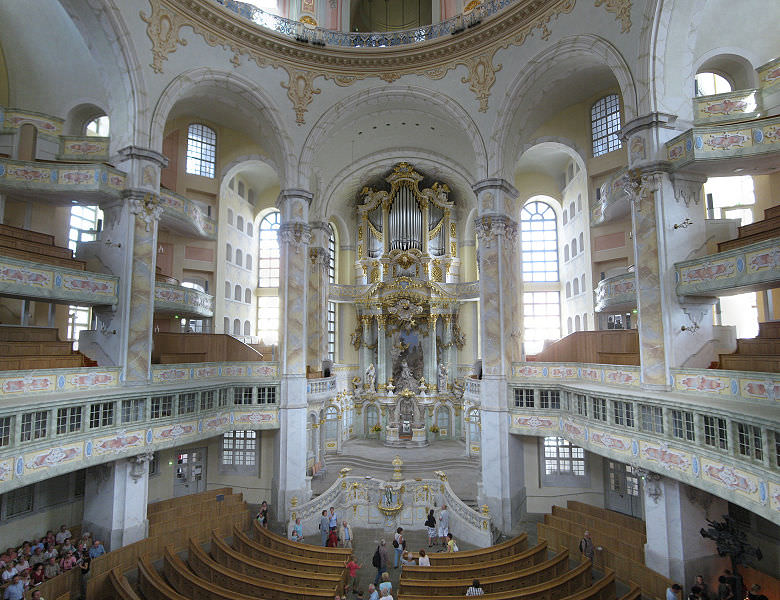 German) of the main sanctuary are offered Monday through Friday at noon and 6:00 p.m. A twenty-five minute film about the church, its history and reconstruction efforts is shown Monday through Saturday in the visitor centre. Visitors can access the dome and a viewing platform, though the climb to the dome can be strenuous and children under the age of six are not permitted in the dome. Access to the dome is available daily for a cost of €8, with hours changing depending on the season. An exhibition about the Frauenkirche is on display at the Dresden City Museum, Wilsdruffer Strasse 2, through the end of 2010.

Written by Morgan Young for EuropeUpClose.com