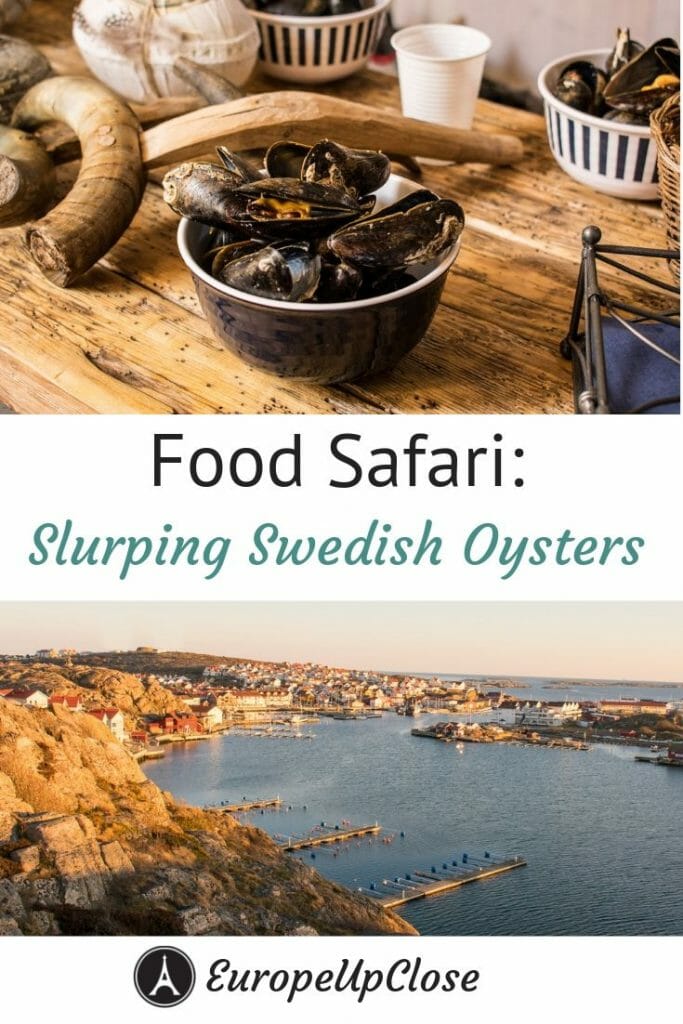 The secret to the best oysters and mussels in the world is quite simple, says Septuagenarian fisherman, Lars Marstone. First, they need to grow in water that stays frigid year-round. Then you must eat them within minutes of plucking them from the sea. Here on the craggy Bohuslan coast of western Sweden, both criteria are easily met in their Swedish oysters. 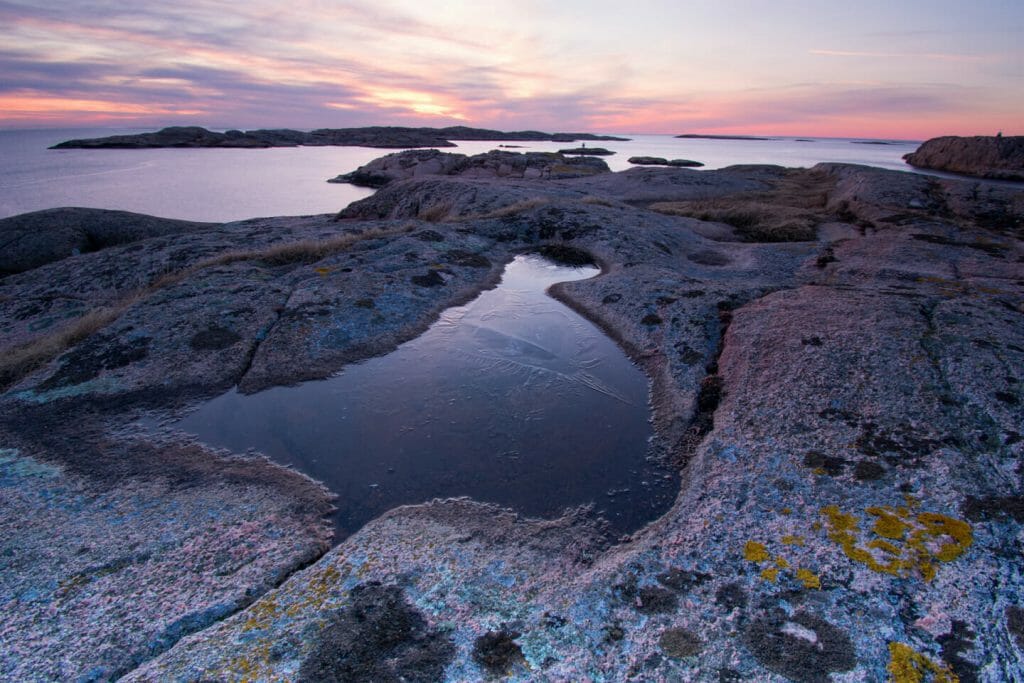 My wife and I have come to the coastal village of Lysekil for one reason: to eat some of the world’s freshest shellfish. Swedish seafood is such a popular draw to locals and visitors alike. Several local fishermen like Lars now offer “seafood safaris.” During these excursions, guests join a local fisherman out at sea. Then they enjoy a meal made from that day’s haul back on shore. In a nod to the big game safaris of Africa, Sweden touts its own version of the big five: langoustines, lobsters, prawns, mussels and oysters. With lobster out of season and having already sampled towering plates of langoustines and prawns, today it’s mussels and oysters that were after. And this time, we’re going straight to the source for a sea-to-table experience.

Our expedition begins onboard Lars’ borrowed motorboat, our bodies wrapped in full thermal overalls (“you can float in them if you fall overboard,” he quips). We chug across the Lysekil archipelago as icy water shimmers beneath us and rays of sunlight bounce off the rosy granite boulders that jut out from the sea. Though it is spring, the brisk air bites at our faces and fingers to remind us that this far north, winter obeys no calendar. 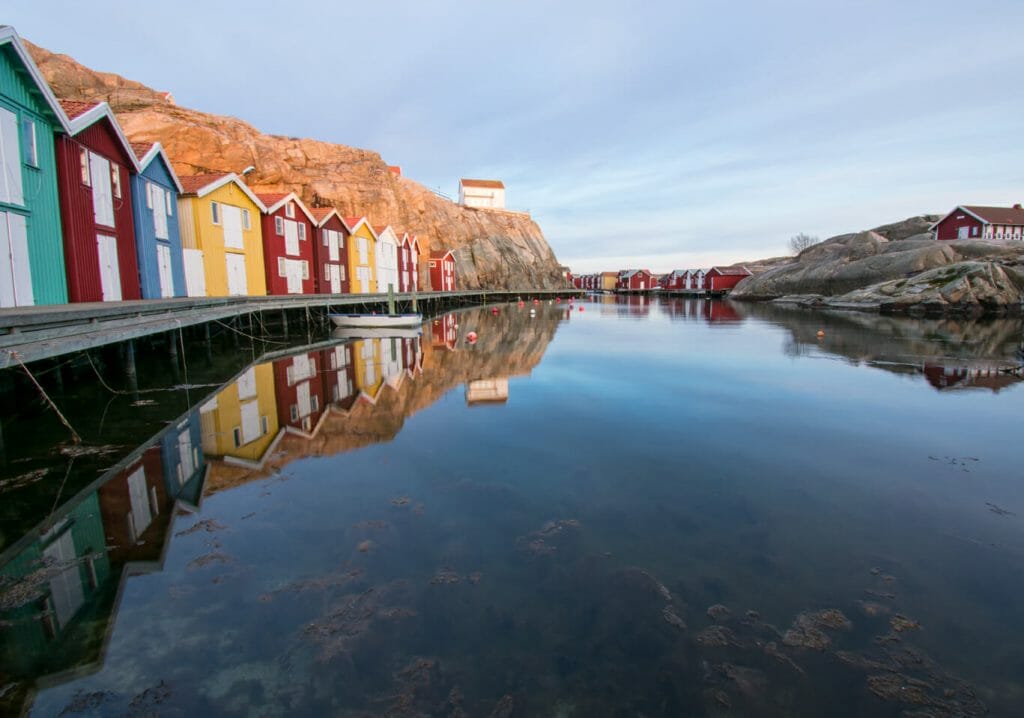 Until recently, the kind of seafood smorgasbord we are searching for might not have been possible. “Ten to 15 years ago, you didn’t eat mussels and oysters except in the countryside,” explains Lars, who has spent his entire life in Lysekil. “We never knew you could do anything with the oysters, and mussels were only for bait.” And now? “We eat them every day,” he says.

The Bohuslan coast consists of over 8,000 islands and stretches north for 175 miles from Gothenburg, Sweden’s second-largest city, all the way to the Norwegian border. Lars is taking us to the nearby island of Karingeholmen where we’ll meet his wife, Marvoir, for lunch. But first, there are mussels to find.

It turns out that we don’t have to search very hard; Lars raises mussels himself using a series of ropes suspended in the water by buoys near his home. The mussel larvae are happy to latch on to the ropes where they slowly grow to maturity in the cold, mineral-rich waters. Lars’ six kilometers of rope will produce 20 tons of mussels in two years, which he uses for his tours and sells to area restaurants. Marvoir is already preparing fresh mussels on shore for lunch, so we drift on in search of the crown jewel of these seas: the Swedish oyster. 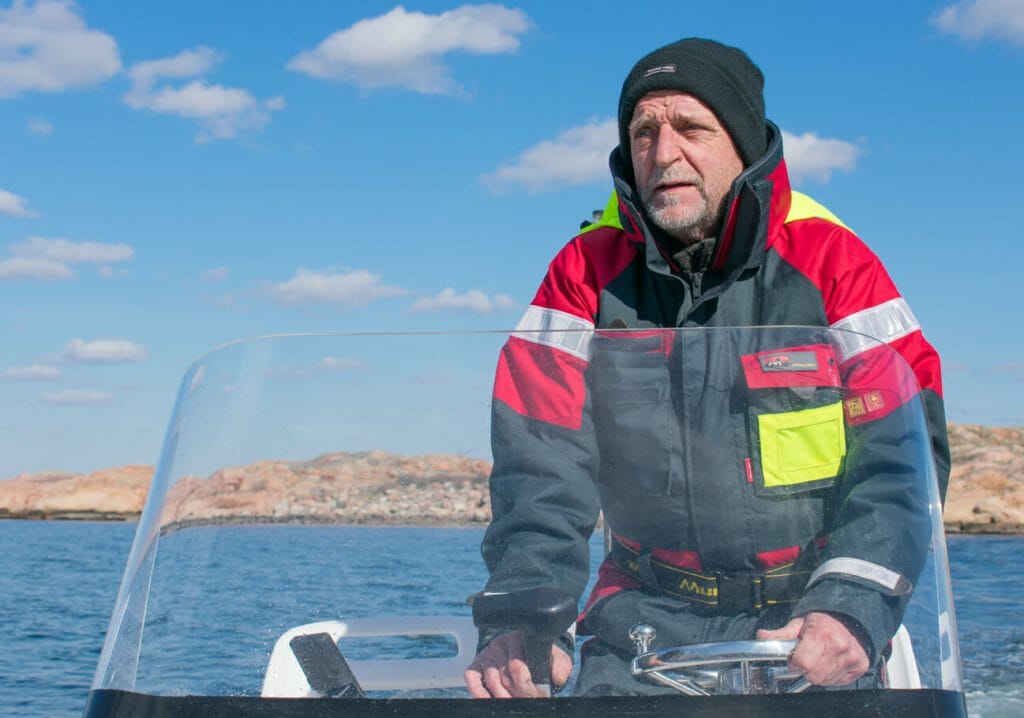 Lysekil Sweden – Lars guiding the boat across the bay

Swedish oysters are in such high demand and short supply that they are unlikely to appear on menus outside of the country. Lars dives weekly during the season to collect these distinctly flat bivalves, whereas other oysters can be gathered by wading into the sea. He’ll have us sample this local specialty once we reach land.

The boat putters towards Lars’ home, and the wafting aroma of white wine sauce and garlic tells us that we are close. Once docked, Lars leads us along the rocky shoreline and pulls an oyster trap from the water.

Like a fine wine, an oyster’s taste is deeply influenced by its terroir. “Oysters grow very slow here because it is so cold,” Lars explains. “That’s why they have such a good taste. It’s a strong taste.”  In addition to allowing the oysters’ flavor to develop slowly and deeply, the frigid temperatures here also inhibit the growth of certain bacteria that could make them unsafe to eat.

How To Eat Swedish Oysters

Lars scoops a trio of Swedish oysters out of the trap and prys them open with a special blade. He passes one each to me and my wife while keeping one for himself. There’s no splash of lemon juice or dash of Tabasco sauce here; au naturale is the only recipe on the menu. 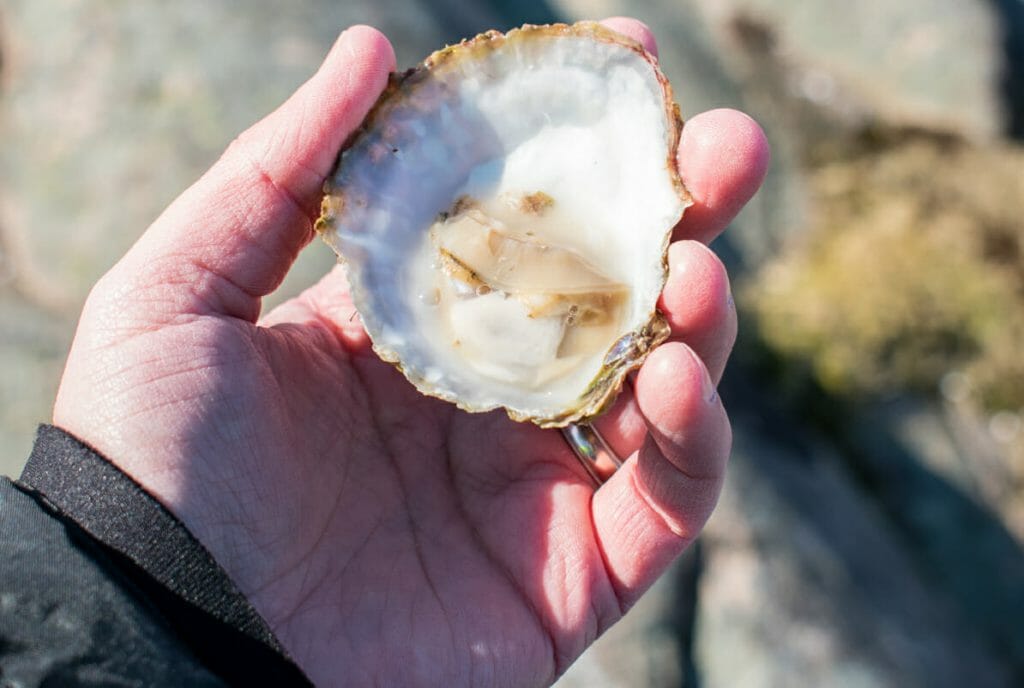 Swedish Oysters – A Swedish oyster straight from the sea

“People think you just swallow the oyster, but you have to chew it to get the flavor,” Lars says, as I size up the fleshy creature I hold in my hand. I check the pockets of my thermal overalls for a wedge of lemon, but come up empty. Following Lars’ lead, I slurp up the contents of the shell and give it a quick chew before swallowing. My tastebuds are stormed by the oyster’s briny punch, which then dissipates into a pleasant salty aftertaste, as if the sea itself were waltzing across my tongue. Lars looks to the heavens, closes his eyes and savors his catch. “Delicious,” he says, as if he were tasting an oyster for the first time. His then plunges his calloused hand back into the trap to pull out another round. 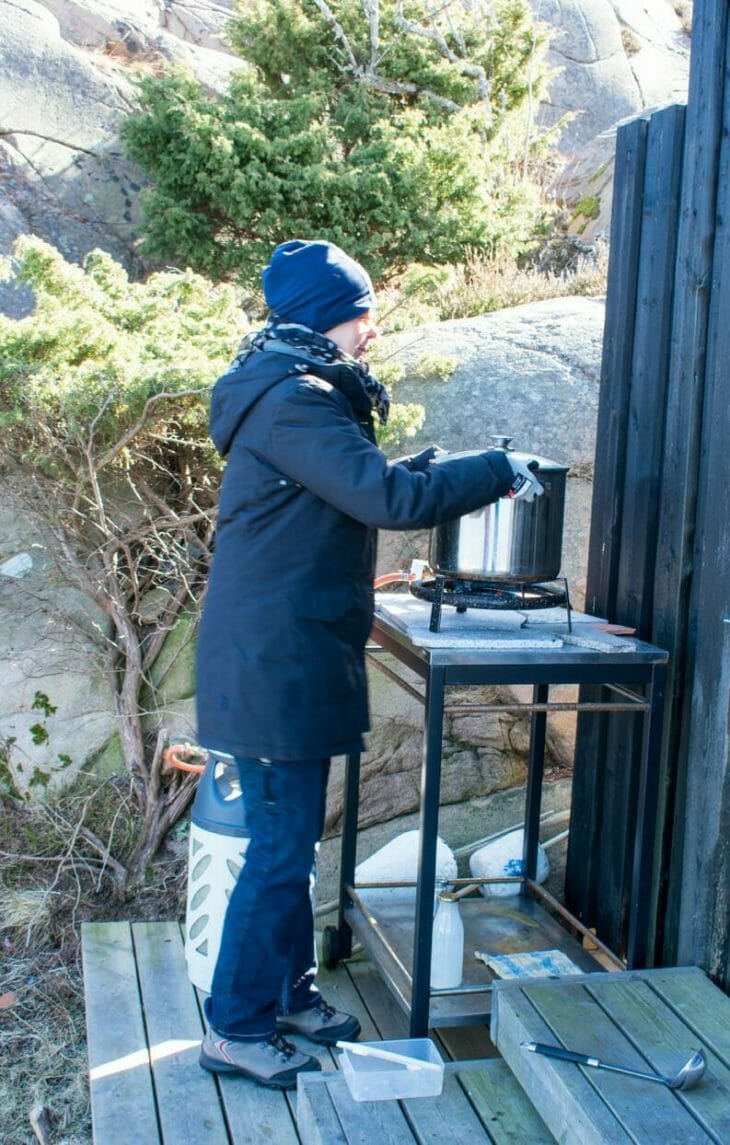 Once we’ve had our fill of oysters, we head inside to join Marvoir for the main course: a lunch of fresh mussels simmered in white wine, cream, garlic, leeks and shallots. The mussels taste of the sea. But the flavor greets us with a gentle caress rather than the oysters’ one-two punch. The sweetness of the wine and cream tame the saltiness of the water while the garlic insists on another bite. We reduce the mountain of mussels in front of us to a pile of shells in no time. Then each take turns sopping up the remaining sauce with a slice of homemade bread. 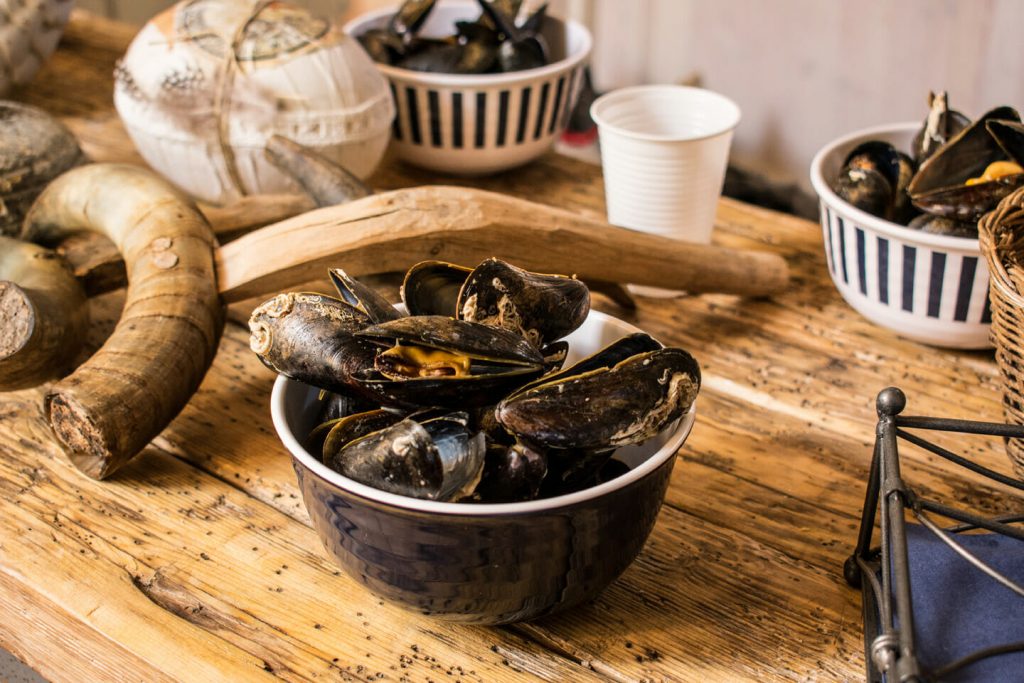 Lunch devoured, Marvoir returns to the table with carrot cake and cookies. It is clear to her why guests have traveled from all over the world to dine with her and Lars atop this Bohuslan rock. “There’s just something about water,” she suggests. “You should be near it. This water is so clean and cold all year.” And the result of those conditions? “We have the best oysters and mussels in the world,” Marvoir says.

Tours are three hours long and depart year-round on Fridays and Saturdays at 1:30 pm from the Lysekil North Harbor. The cost is approximately $95 USD per person which includes an oyster and mussel lunch. 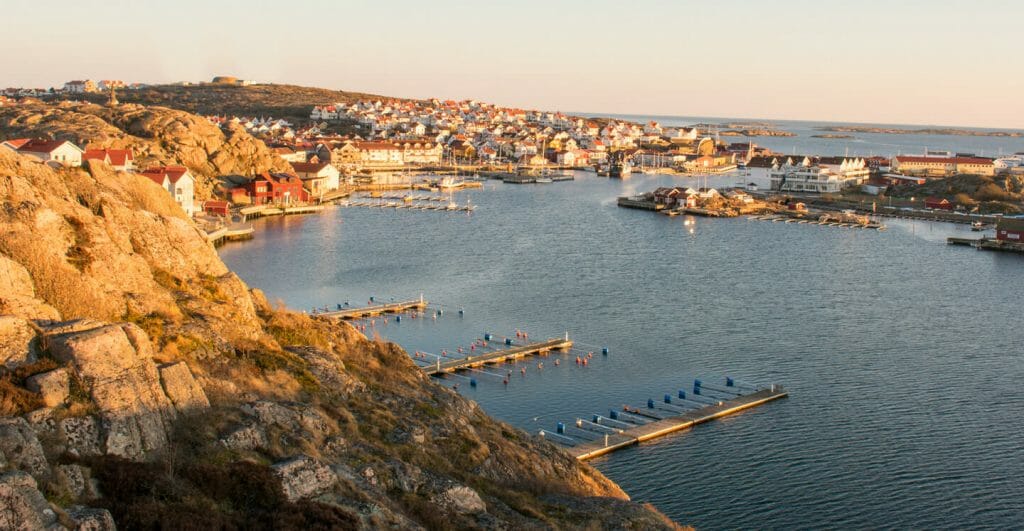 Dusk on the coast of western Sweden 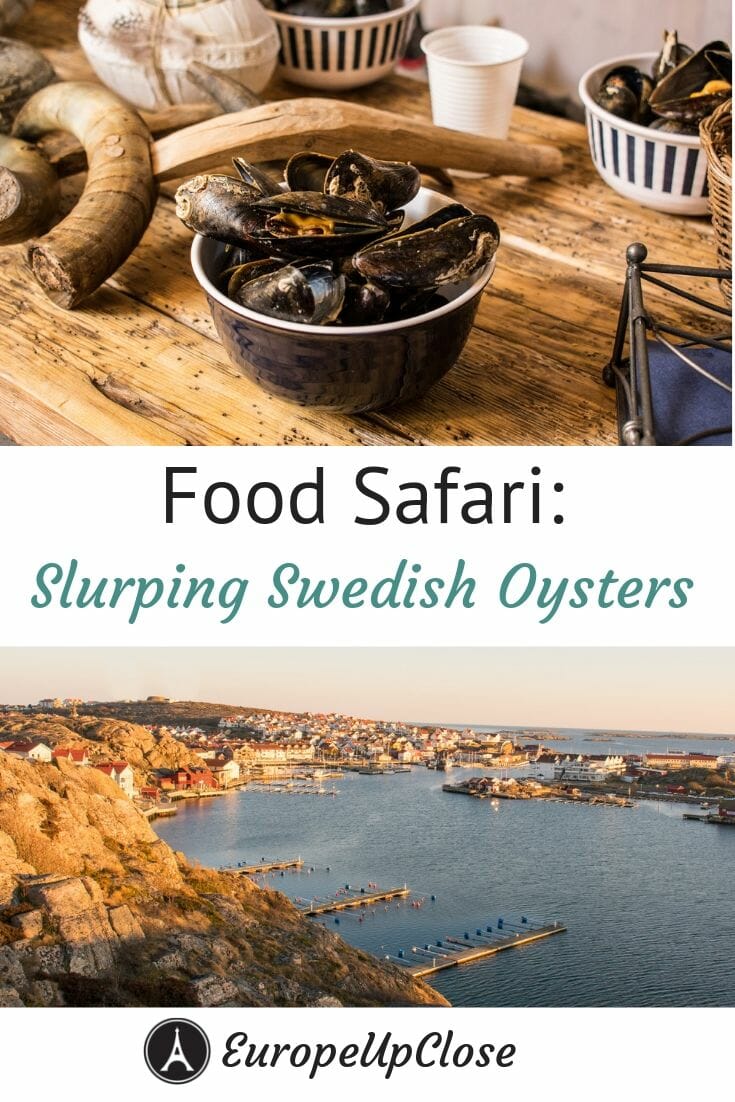