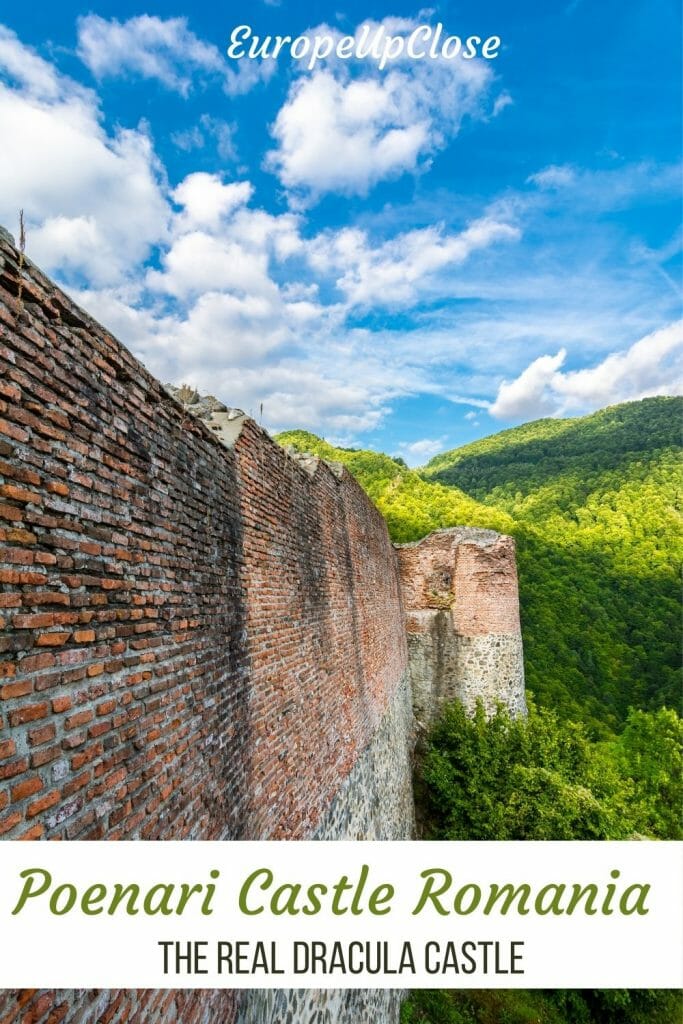 To visit the real Dracula’s real castle in Romania, you have to know which castle to visit. Shall it be Bran Castle of Transylvania, beloved by tourists and the country’s tourism board, or Poenari Castle of Wallachia, the historically valid but little-known alternative?

>>Check out these amazing “Dracula Tours” in Romania

Those who have read Bram Stoker’s novel about the world’s most famous vampire are often curious about what inspired the Irish writer to pen his tale. That explains why 200,000 foreigners (in addition to 300,000 Romanians) crowd Bran Castle each year.

The former may be hoping to see crypts and cobwebs, blood and bats, and invariably they come away disappointed. They seem not to realize that Vlad Drăculea — the historical figure on whom Count Dracula is based – was not a count, did not live in Transylvania, and had absolutely nothing to do with Bran Castle. The association is based strictly on appearance.

The forbidding structure described by Stoker in his book seems to be based on the menacing façade of Bran Castle, with its jutting spires and ominous silhouette. But even this is untrue since Stoker never laid a foot in Romania. There have been studies of the research he did for his book and Bran Castle does not show up in any of them.

Romanians visit Bran Castle for completely different reasons. They have come to see a 14th century structure with relevance to their national history. That a popular 20th century royal, Queen Marie, lived here and left personal items of furniture and artwork adds to the attraction for them.

A Visit to Poenari Castle

Curtea de Arges is the closest village to Poenari Castle; Bucharest, the capital of Romania, is 2.5 hours further south. Since Poenari is not a major tourist attraction, there aren’t hoards of buses heading there daily.

Hike up to Poenari Castle

And you have to be prepared to walk up when you arrive – 2,800 feet up. What is left of the castle is perched on the hill where it was constructed. There are 1,482 well-tended steps, but no escalators, elevators, or roads to the top.

The reason Vlad Tepes (aka the Impaler) chose this location was its relative inaccessibility. In its heyday the fortress dominated the entire top of Poenari Hill.  However, it has been a ruin for centuries as a result of neglect and natural disasters.

The low-key entrance to the steps leading up to the castle is on Strada Albești, Transfăgărășan (DN7C), the road leading north from Curtea de Arges. It is near a hydroelectric plant, which serves as a marker.

If you hire a local taxi or guide, they will know the way. My driver/guide knew the route by heart, but balked at accompanying me up the steps. “Only 10% of my clients want to climb this hill,” he sighed, “and no one has done it in a long time. I am out of shape.”

There are handrails for most of the trip up (and down), crisscrossing back and forth between deep woods and patches of sunlight. Near the top, the steps stop zigzagging and lead more or less straight (but still up) to massive stone walls nine feet thick.

First there is a modern-day Romanian flag, then a small entrance booth where you are asked to pay five lei (a dollar) for the privilege of traipsing through the ruins. Then comes the one and only reminder that this is DRACULA’s citadel, and not the ruins of just any old medieval castle.

First, a high-mounted pillory, designed either for very tall prisoners or very brutal punishment. Behind that two life-size mannequins impaled on stakes,  Vlad Impaler style, with red drool painted around their mouths, in case you didn’t get the idea.

That Vlad favored impalling his victims is a matter of record. Documents describe cases of hundreds of impaled vicitms lined up along roads to intimidate would-be dissenters. Yet modern historians point out that impaling was not uncommon back then, and torture was socially acceptable.

Entering the castle ruins proper, visitors can wander at will, scrambling over original stones that have held up well over the centuries. No unworldly explanation for the durability; rather, the stones were bound with lime mortar, more flexible than cement and more resistant to seismic activity.

The foundation and lower part of the walls are built of medieval stone; the upper walls are made of brick, giving the structure a reddish tinge. Historians conjecture that the bricks were used to replace stones shattered during sieges of the fortress – none of them successful.

You can admire spectacular views of the countryside, and squint at the small information plaques written in English as well as Romanian. One view with a guardrail looks down to a sliver of water, the Râul Doamnei, a tributary of the Argeș River.

Gripping the guardrail tightly, I looked down to the “river of the princess” far below. The name comes from the wife of Vlad Drăculea, Jusztina Szilagyi of Moldavia, who jumped from the castle into the river rather than be captured by the Turks during a siege in 1462.

This is not recommended as a shortcut for your descent. Better to wend your way down those 1,482 steps at your own pace. You may find yourself in the company of a few other tourists, mostly if not exclusively Romanians. Or you may be alone, which is the best way to absorb the scenery and atmosphere. No sophisticated signage or spotlight effects, but no Dracula mugs or bat magnets either.

Poenari Castle was written by and photos by Claudia Flisi for EuropeUpClose.com

In as much I hate Dracula's 55IQ's subject stories ,I enjoyed the walking thru visiting description style ,clearly ind icative of neutral professional writer approach,,,,,,,just one element would have added tridimensional volume to the inspiring alpine location: the underwood and the ancient molded brick and mortar aromas,permeating steps,trail and ancient castle ruins !?

Thanks for your notes of appreciation. What I loved most was the authenticity of the place. It wasn't hokey or "touristy" at all. And yes, the view is great . . . of Wallachia NOT Transylvania.

Very interesting! I've only heard of Bran castle, not this one

I'm so glad to read about your visit to Poenari fortress, it's one of my favorite locations. And you're absolutely right, this is "Dracula's" real castle, not Bran. Although Bran is a very beautiful castle the whole Dracula connection is just a marketing gimmick. And Poenary may be not as well-preserved as other castles in Romania, but the view is gorgeous!