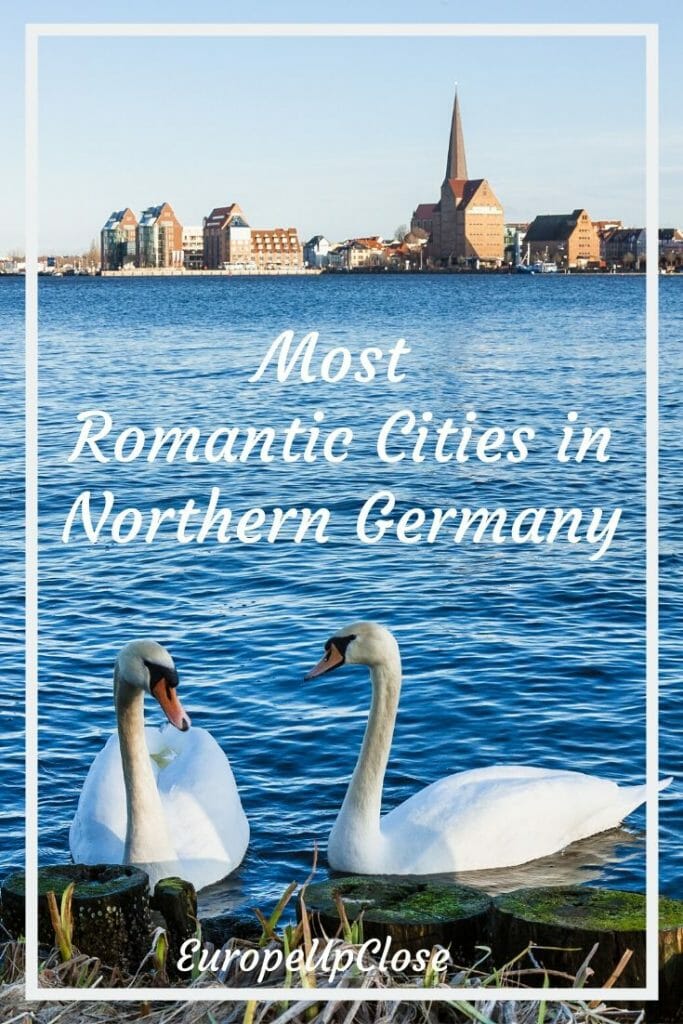 Northern Germany is authentic and diverse. The term “Northern Germany” describes not just a geographically defined territory. This area has an entirely different identity, the Low German language, particular aspects of history and culture. Here, dozens of medieval cities in Northern Germany have preserved the atmosphere and grandeur of the Hanseatic League.

There are so many beautiful places with incredible nature throughout Germany, and bustling sites like Berlin, Hamburg, or Munich, but it’s in the North that we found this romantic atmosphere. We have chosen seven most romantic and cozy towns you should definitely visit to experience Northern Germany to the fullest.

7 Most Romantic Cities in Northern Germany

The small town of Wismar on the Baltic Sea consists almost entirely from brick houses and is one of Brick Gothic examples. Thanks to this fact, the historic city center has been included in the UNESCO World Heritage List.

The streets of Wismar have preserved the splendor and grandeur of the flourishing Hanseatic League in the 14th century. Both central and back roads convey the spirit of the Middle Ages and take you back in time. The cozy restaurants and small shops are scattered all over the place, and there are no crowds of tourists.

Market Square, with its stunning architecture, is located in the heart of Wismar. That’s where most visitors start their acquaintance with the city. In the center is a low tower in the style of the Dutch Renaissance – Wasserkunst, built in the 17th century. Until the XIX century, the building served as a distribution point for water.

Also, on the Market Square, you will see the majestic brick building called “Alter Schwede.” It was constructed around 1380 and is now the oldest building in the city. In 1878, a hotel opened here and gave such a funny name to this structure. Today, the building houses a restaurant with traditional German food, which you should definitely check out.

It is also interesting to visit the church of St. Nicholas – another sample of Gothic architecture; as well as to admire the tower of the Church of the Virgin Mary. Complete your exploration in the old port of Wismar with its picturesque promenade and colorful houses.

Where to stay in Wismar – most romantic hotels:

Just 40 minutes away from Wismar, there is another romantic German city – Schwerin. It’s worth coming here, at least for the unusual Schwerin castle, standing in the middle of a picturesque lake. With its towers and domes, it looks like a fairytale castle fraught with many secrets and legends. Overall, Germany is famous for its lakes and it’s always nice to visit a city that’s so close to nature.

Six hundred fifty-three halls of the palace are decorated with inlaid parquet, exquisite wood carvings, gilding, and stucco molding. Imagine walking around the Throne Room with columns of Carrara marble and gilded cast-iron doors, the solemn Gallery of the ancestors, the Game Room and the round Tower Room in the style of the garden pavilion and gorgeous view of the lake.

Festivals and concerts are regularly held in the castle and on its territory. The castle is surrounded by an exquisite baroque-style garden, which makes it so pleasant to stroll on a summer day.

In the vicinity of the castle, you can find the State Museum, the Siegeszoyle obelisk (German victory column), the Old Palace, the palace arena and stables, as well as the building of the State Chancellery, designed in the classical style.

Besides, it is worth visiting the old part of Schwerin, which is called northern Florence and the city of seven lakes. On the streets with half-timbered houses, you can find fascinating shops and restaurants, as well as experience the atmosphere of a small romantic city.

Where to stay in Schwerin – most romantic hotels:

Travel further south to Lüneburg – the city that made a fortune in salt trade and became one of the wealthiest in the Hanseatic League. Now the salt mine has been transformed into the Museum of Salt.

Go on a date in nature to the Luneburg Heath – a place where for many years forest has been cut down to extract the salt. Today it is a national park perfect for hiking, cycling, and horse riding with a safari park located nearby.

The historical center of the city is perfectly preserved, and you can easily spend hours admiring ancient Hanseatic merchant houses and walking across stone bridges. The town has many Gothic churches, including the gorgeous Church of St. John and St. Michael, where Johann Sebastian Bach was trained at the beginning of the 18th century.

Be sure to stroll along the Ilmenau River with its unique architectural ensemble and lovely restaurants on the promenade, and drop by Am Sande Square with old brick houses.

Lüneburg is also famous for its shopping (about 400 shops), as well as a spa with salt baths.

Where to stay in Lüneburg – most romantic hotels:

Another romantic old town of Goslar is located in Lower Saxony, at the foot of the Harz mountain range. The city started to grow thanks to the Rammelsberg mine, where copper, lead, and zinc were extracted.

The majestic palace-palatinate in the Romanesque style and the towers of as many as 47 city churches and chapels give a festive feel to this medieval city. Pay attention to the elegantly decorated houses of wealthy citizens, shop buildings, the old town hall, and half-timbered houses with carvings.

In 2010, the UNESCO Goslar and Rammelsberg World Heritage Site was expanded: it also included the Walkenried Monastery, the old Grube Samson mine in St. Andreasberg, and the Upper Harz water intake system.

Nature and architecture have intertwined and made Goslar a fantastic place to relax.

Where To Stay in Lübeck – Most romantic hotels:

Lübeck, Germany, is a town located on the banks of the River Trave. This city has the second-largest port on the Baltic Sea, with the distance to Hamburg being about 60 km. Rich history, a large number of attractions, ancient architectural monuments distinguish Lübeck from other settlements in the area.

Lübeck retained greatness of the influential Hanseatic League since exactly this town was the de facto leader of the trade association. Since 1987, the old districts of Lübeck have been included in the list of UNESCO World Heritage Sites, which is not surprising because of all medieval buildings located in the area.

For example, Lübeck is the only settlement in northern Germany that has a historical center with equal historical importance to the one in Nuremberg.

Where to Stay in Lübeck – Most Romantic Hotels:

Wernigerode is one of the coziest cities in Germany with its lovely half-timbered houses located on the winding streets of Altstadt. The town is situated in the northern foothills of the Harz mountain range, on the banks of the Holtemme River. The whole city of Wernigerode is under UNESCO’s protection thanks to the abundance of unique architectural monuments.

It will take you 5-6 hours to leisurely walk through all the sightseeing points; Or a little more if you want to have a meal in the castle’s restaurant or to have dinner in the city.

Wernigerode Castle is the main attraction not only in the city but probably in the whole region. It is nestled on top of Mount Broken – the highest point in northern Germany. Since 1664, the existing fortress was rebuilt into a baroque castle and reconstructed several times until the second half of the 19th century.

The highlight of Wernigerode is the Harzquerbahn steam narrow-gauge railway, which was built a hundred years ago. Today, small steam locomotives transport travelers around the neighborhood and towards the castle.

Where to eat in Wernigerode:

Where to Stay in Wernigerode – Most Romantic Hotels:

The port city of Rostock is located in the federal state of Mecklenburg-Vorpommern, on the Baltic coast at the confluence of the river Varnov. In the past, it was an essential center for shipbuilding in the GDR. Today, it is the largest settlement in the region famous for its international maritime festival Hanseatic Regatta and one of the oldest universities in the world dating back to 1419.

You can start the city tour from the central university building on Universitätsplatz. In the center of the square near a small park, there is an exciting fountain Brunnen der Lebensfreude. The fountain with bronze sculptures of people, animals, and birds is a popular meeting place.

In the pedestrian area of Kröpeliner Straße, you can see the bourgeois houses and enjoy fresh seafood brought in from the nearby port in the morning. The streets adjacent to this area are full of examples of typical Hanseatic and medieval red-brick architecture.

The Kröpeliner Straße will lead to Neuer Markt unless you end up going to one of the local restaurants. The square is dominated by the Rathaus (1270) – the Gothic town hall with seven towers and baroque elements.

Tip: To see the most beautiful view of the Baltic Sea and Rostock’s surroundings, head to the top of the Leuchtturm lighthouse on Warnemunde beach.

Where to eat in Rostock:

Where to stay in Rostock – Most romantic Hotels in Rostock:

Northern Germany is often overlooked by international tourists, which is a real shame. I hope this post showed you some of the idyllic and charming towns and cities in Northern Germany that are worth to be on your next Germany itinerary.

Most Romantic Cities in Northern Germany was written by Inna Nedostupenko from the Executive Thrillseeker, an adventure travel blog that will teach you how to travel smarter, cheaper and longer! Please follow her on Instagram, Facebook, and Pinterest.

Most Romantic Cities in Northern Germany – Pin for later: