Germany is full of charming old towns romantic cities and tourist routes such as the Romantic Road, but there are less traveled areas and towns in Northeastern Germany that are worthy of a visit. One such town is Schwerin, Germany. This place is an ideal get-away that offers a 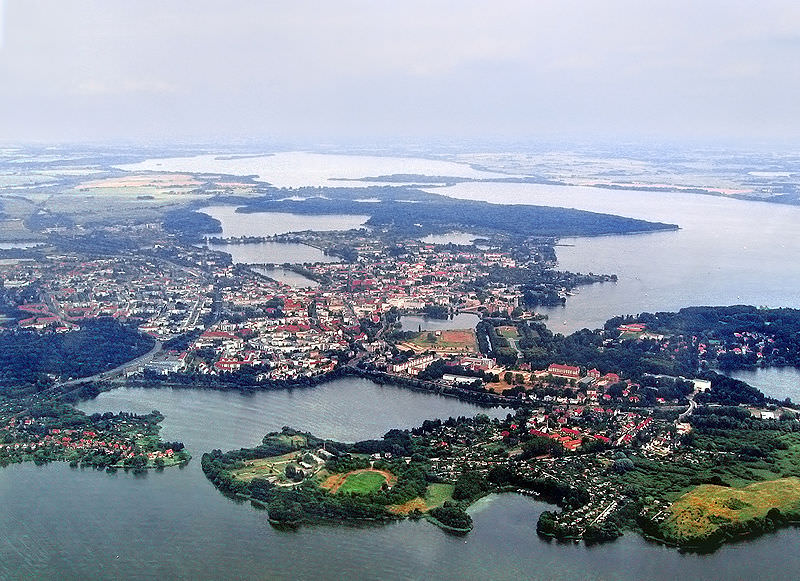 wealth of old-world charm in a picturesque country-setting.

The town of Schwerin is located 2 hours north of Berlin and 1 hour from Hamburg in Northeastern Germany. Set in the lush greenery of the German state of Mecklenburg-Western Pomerania (Mecklenburg-Vorpommern), it provides a great location from which to take day-trips to other worthwhile places nearby. With 130,000 hectares of waterways, Mecklenburg-Western Pomerania has more water than any other German state. The region is a paradise for nature lovers as it offers an extensive network of walks and cycle trails as well as countless lakes that can be explored by canoe or sail boat. And the air in the East German coastal region is widely regarded as the cleanest in the whole of Germany.

One of the few towns that was untouched during World War II, the city of Schwerin’s narrow lanes, quaint houses, majestic buildings and inviting lakes makes this small city easy to navigate and a delight to discover. Schwerin boasts a wealth of places of 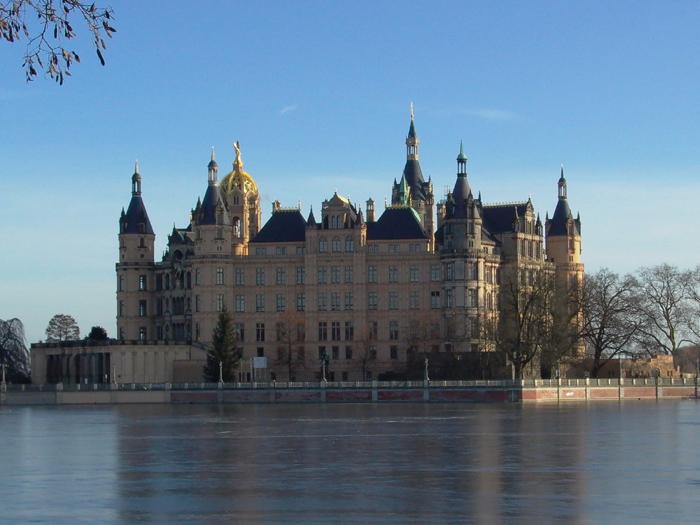 interest. One of the most splendid is the fairy-tale Schwerin Castle known as the “Neuschwanstein of the North”. The Schwerin Castle, built on an island in Lake Schwerin, features a magnificent museum and orangery in a romantic park setting. The neo-baroque Mecklenburg State Theatre also metits a visit as does the market square with its old town hall, gabled houses and lion statues.

The Castle or palace is, architecturally, one of the most important buildings in Europe. It was built from 1845 – 57 in the neo-renaissance style under the direction of G.A. Demmler and F.A. Stüler as a new residence for the Grand Duke of Mecklenburg-Schwerin. At that time Duke Johann Albrecht I commissioned the clay sculptor, Statius van Düren, who was famous throughout  Northern Germany, to produce terracotta work. The influence of the Dutch renaissance is obvious in the design of the palace, with steep

volute gables and diamond pointed plaster work. The former living, social and ceremonial rooms are now used by the palace museum to exhibit pictures, sculptures, furniture, weapons, medals, jewelry and other art. The ducal portraits from the 16th century are the oldest paintings of the neo-classical sculptor, C. D. Rauch. The palace has also been the seat of government of the state parliament of Mecklenburg-Vorpommern since 1990.

The two hotels that I recommend are either the 3 star BioHotel Amadeus in the city of Schwerin. For 78-130 Euros (depending on season) it offers free Wi-Fi and free parking. It is located in a villa, a short walk from the lively Mecklenburger Strasse and Lake Pfaffenteich. The hotel’s location is very convenient and you can even walk to the main train station. This hotel is considered a Bio-hotel. It offers zero C02 pollution with special air pumps for heating the water. The electricity is supplied from a local green grid of solar power. An organic Buffet Breakfast is served or you can have breakfast in your room. Rooms are very spacious and quiet. 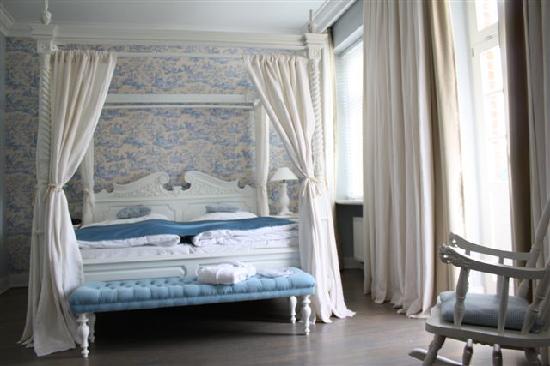 On the outskirts of town near Glambeck Lake is the 4 Star Schloss Basthorst Hotel and Restaurant.  For only 122-150 Euros per night you can stay in one of the historical manor’s 45 rooms and suites. Only recently restored, the manor displays both old world charm of the 18th century along with modern furnishings and comforts. The large Spa and Wellness Center here offers every spa amenity under the sun, including sauna and mineral baths.

In summer time, the highlight is the Castle Festival with the Verdi operas performed in the Square by the Mecklenburg State Theater  company. The entire area of Mecklenberg –Pomerania is one of the most beautiful nature oriented areas in Germany. This is a great area to visit to get away from the crowds and tourists and to experience the art and culture of Germany.