Herrenberg is a gorgeous town in the state of Baden-Württemberg, southwest Germany. Its town centre is full of hundreds of immaculate medieval half-timbered houses, their dramatic triangular gable-ends facing the streets. The uniform character of 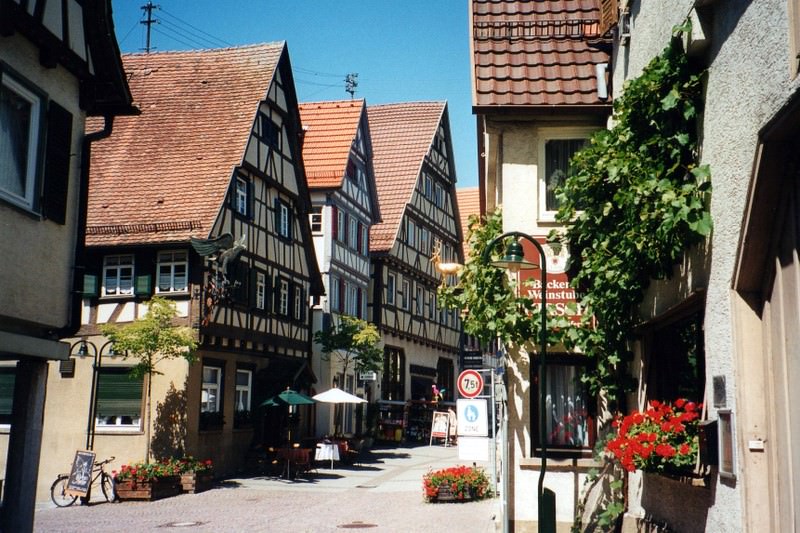 many of these houses is explained by the fact that much of the town was reconstructed following a devastating fire in 1635. The downtown area is largely pedestrianized, and has been a listed and protected site since 1983. The earliest known mention of the town was in 1228.

At the heart of Herrenberg is the market square (Marktplatz), which has a particularly dramatic look thanks to the big half-timbered houses that frame it. On a summer’s day it is delightful to sit out at a table on this square enjoying a beer or coffee. Markets are held on the square on Tuesdays and Saturdays, and at the end of each year there is a special Christmas market here. 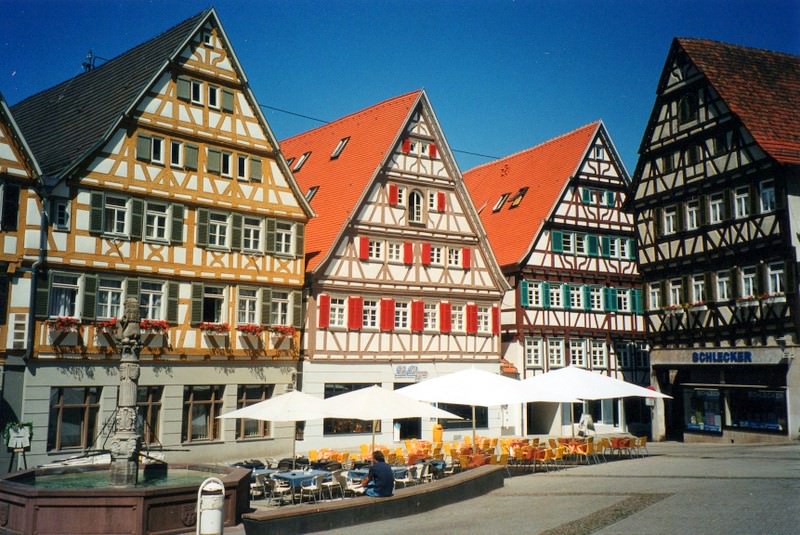 A pretty fountain plays on the square, and has done so since at least the 14th century. Originally it was the source for the town’s water, but now it is merely an attractive landmark, topped by a stone column into which are carved a lion and the Württemberg coat of arms. At the eastern end of the square is the Rural District Office, with flags flying in front of it.

Heading off the market square to the north is Stuttgarter Strasse, a narrow street flanked almost entirely by two and three story gabled houses and boasting the town’s oldest pub, the 15th century Gasthaus zum Deutschen Kaiser. Other impressive old houses – and pubs – are on the street that heads south from the market square, named Tübinger Strasse. Meanwhile, to the west is another delightful thoroughfare named Bronngasse. 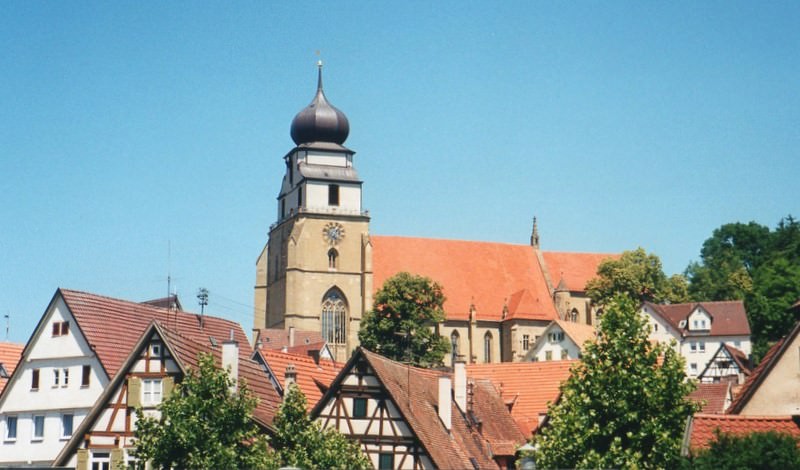 Look eastward and upward, and you cannot fail to notice Herrenberg’s main church, the Stiftskirche, which sits on a hill. It was built in two major phases of construction, from 1276 to 1293 and from 1471 to 1493. The church is surmounted by a Baroque onion dome that replaced two Gothic towers during renovation in 1749. But much of the rest of the church – including the interior – still has a Gothic look. The church’s baptismal font dates from 1492, its stone pulpit was carved in 1504, and the choir stalls were created in 1517. The church houses a bell museum.

On the corner of Küfergasse and Seestrasse is a sculpture by Hellmut Ehrath and Peter Lenk dating from 2000. It commemorates – in a coded way perhaps understood only by the sculptors – the local painter Jerg Ratgeb (1480-1526), who was executed by being torn apart by four horses after collaborating with a peasant revolt that was crushed It has two elements,

one of which shows Ratgeb clinging to a quadrilateral frame while his executioner grabs his foot and holds a chicken in his hand. The other element has a procession of cooks, preceded by a pug dog.

At 31,000 inhabitants, Herrenberg is smaller than its more famous neighbors Stuttgart and Tübingen, but enjoys a very advantageous position from the point of view of transport accessibility. Well connected by various suburban train lines, it is also close to the major roads A81, B14 and B28.