I was in the historic Andalusian town of Ronda for less than an hour before I realized that an umbrella will only do you so much good. Rain clouds were flying in over the surrounding Serrania de Ronda mountains as I crossed the 18th century Puente Nuevo , or New Bridge.

As I peered over the edge down the 400 foot El Tajo gorge to the River Guadalevin, I noticed the strangest thing. The rain was falling up. My face was getting pelted by big droplets that were clearly coming from below me. Huge blackbirds dive-bombed into the gorge, underneath the bridge and onto cliffside perches. It looked to me, no avian expert, that the birds were playing. They were riding the currents of the strong winds ripping through the gorge. The same winds that I felt were about to carry me over the edge. This was some of that unpredictable spring Andalusian weather I had read about.

View from the Puente Nuevo

If those winds had carried me over the edge, I would not have been the first to be thrown into the oblivion of this beautiful gorge. It seems the Puente Nuevo wasn’t just dramatic because of its views. During the 1936 to 1939 Spanish Civil War , the bridge was a popular spot for village executions.

And, like all good historic European villages, the strange and macabre didn’t end there. Orson Welles, of Citizen Kane fame, had succumbed to Ronda’s charms and liked the town so much, it is said, that he had his ashes spread around the Plaza de Toros, the oldest bullfighting ring still in use in Spain. 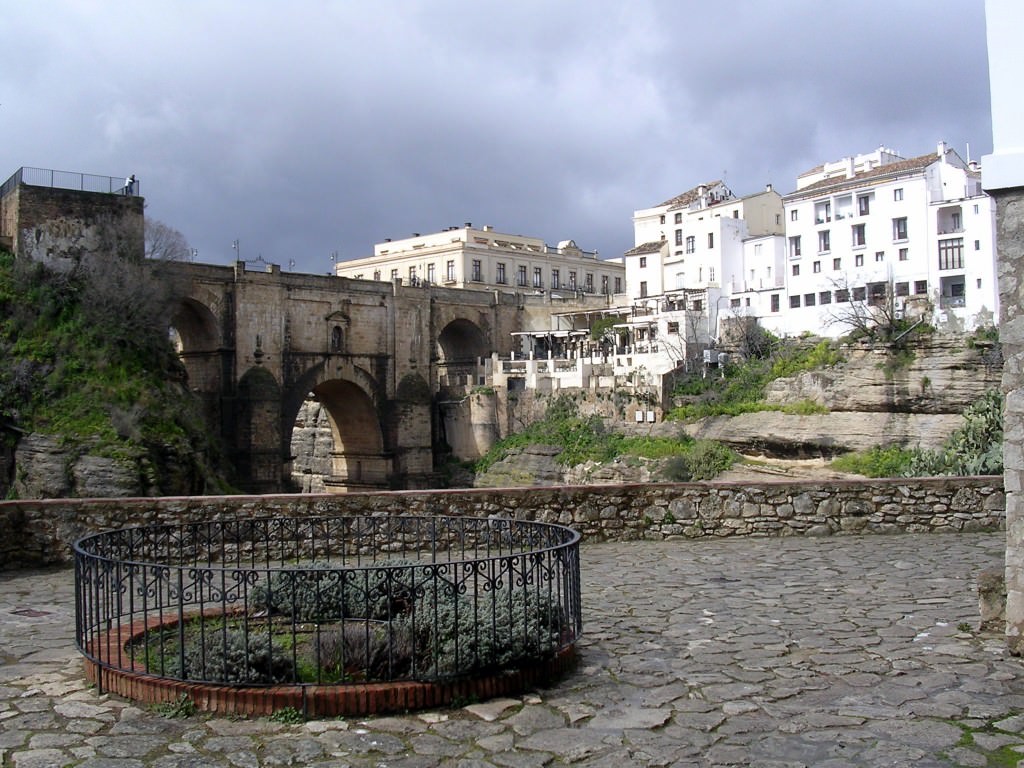 Orson Welles wasn’t the only American icon to fall in love with Ronda. What is now the fastest growing town in Andalusia is also the home of Spanish bullfighting. With a following that rivals any of Europe’s soccer stars, Spain’s matadors are among its most famous citizens with Beatles-esque followings. It should come as no surprise that the skills of these death-defying (well…not always) playboys caught the eye of Ernest Hemingway. The masculine writer’s presence can still be felt in Ronda where tapas restaurants and tavernas hang his picture proudly on the wall. 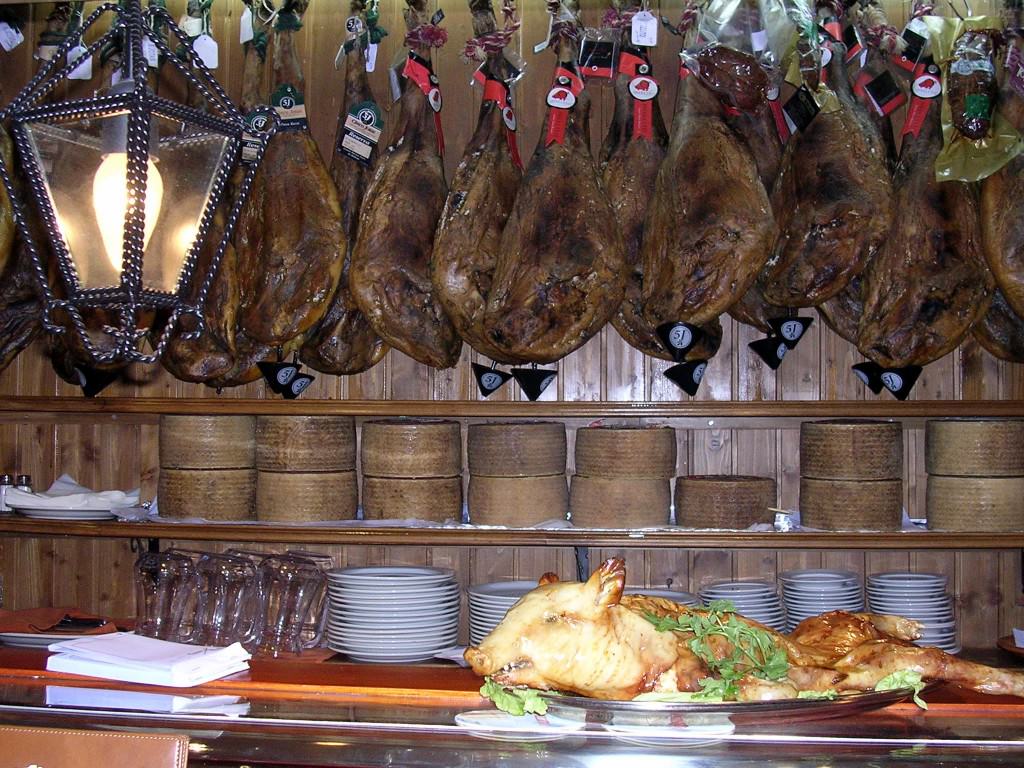 History in Ronda, I noticed during my three days in the town, is not just something for the books. Ronda’s famous bridge connects the Old Town with the New Town but there is little there that will feel “new”. Puente Nuevo, in fact, is just one of Ronda’s three famous bridges built up over the centuries to get locals safely over the twisting gorge underneath the Old Town. 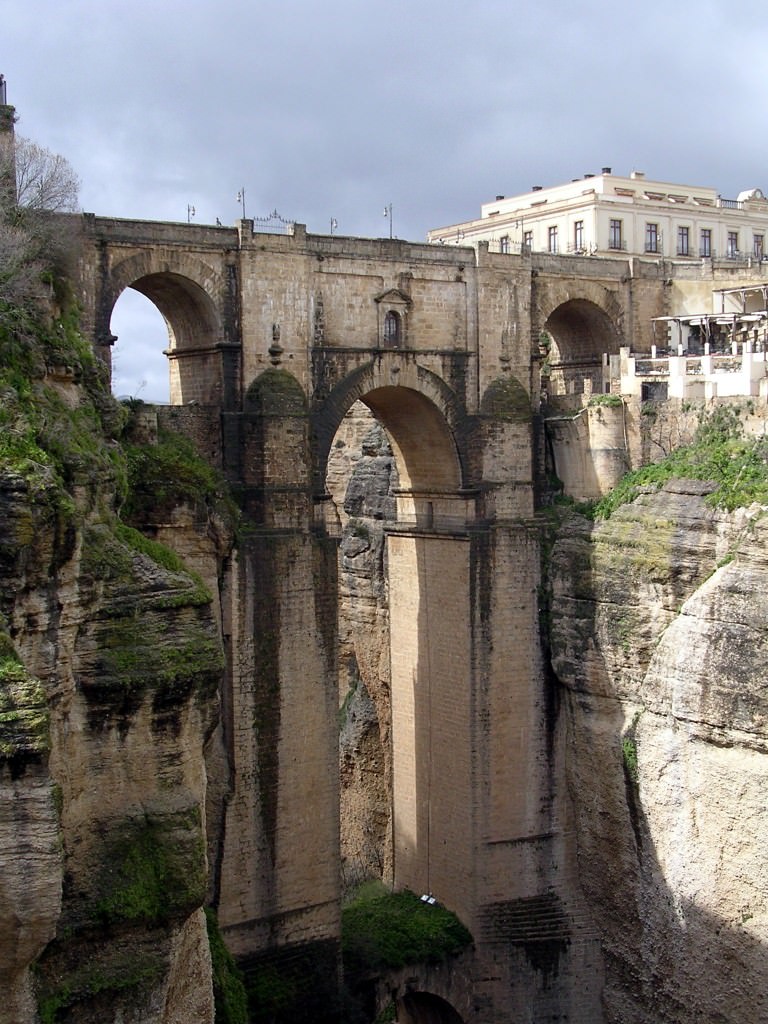 But the bridges are just the tip of the iceberg when it comes to Ronda’s beautiful, historical sites. Exploring the cobbled alleys of the Old Town on foot is nothing short of going back in time. The Old Town is compact which makes walking the best way to get around, but make sure you grab a free map from the tourist office across from the Plaza de Toros. The Iglesia del Espiritu Santo (Church of the Holy Spirit) and the Town Hall , built in 1734, are the two big sites to get lost in.

Saint Mary’s Church and the Palace of Mondragon appear out of nowhere as you wind your way through the narrow lanes. The Old Town is also chock a block of museums big and small, tourist shops and unique boutiques selling everything from pottery and jewelry to Moorish furniture and rugs. The Old Town is also home to a healthy number of three to five star hotels. If you are there in the low season, rooms that would normally cost at least $200 a night can be had for half that. 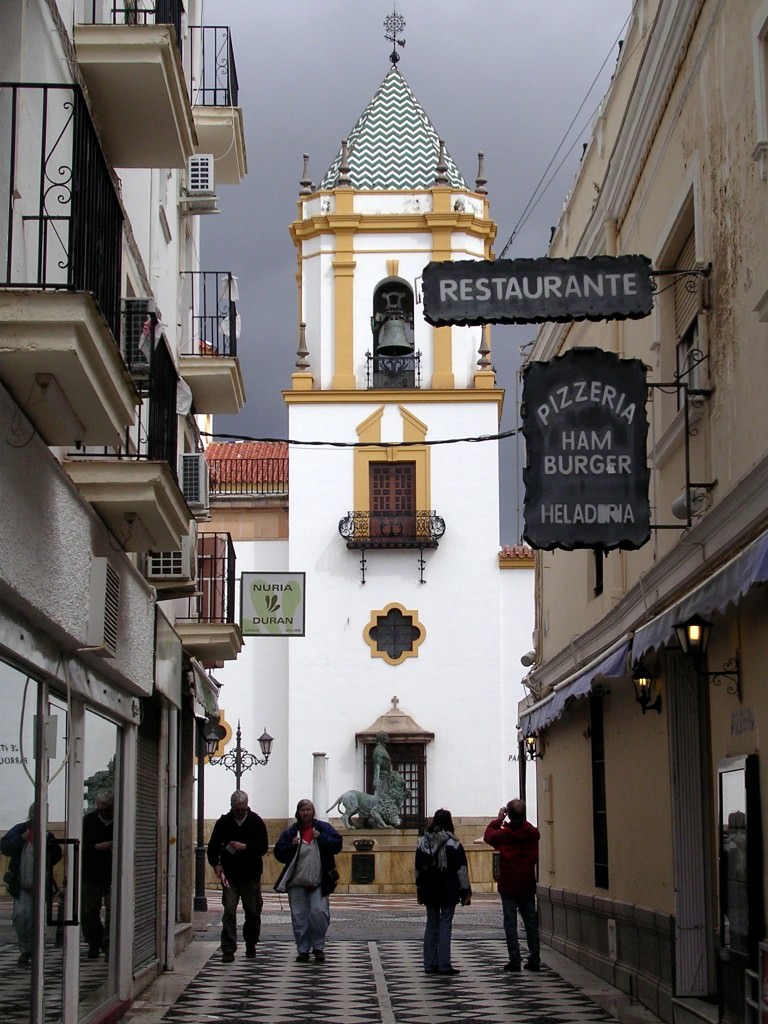 Ronda’s much larger New Town is also well worth your time. This is where you’ll find the Plaza de Toros on the scenic Virgen de la Paz avenue along with a number of some of Spain’s best tapas restaurants. Dig in to tapas, along with other continental food, in beautiful settings in the Pedro Romano alley near the Plaza del Soccorro.

But the main attraction of the New Town is undoubtedly the Plaza de Toros that fills with passionate fans during bullfighting season from spring to fall. The bullring was built at the end of the 18th century and is the first purpose-built space for bullfighting in the world. The first fight took place in 1785 and they’ve been going strong ever since. If the thought of watching man battle bull to the death makes you queasy, a trip into the Bullfighting Museum will at least help you understand the culture. Art aficionados will be happy to know that there are prints by Goya, William Lake Price, Victor Adam and many of Spain’s contemporary artists. 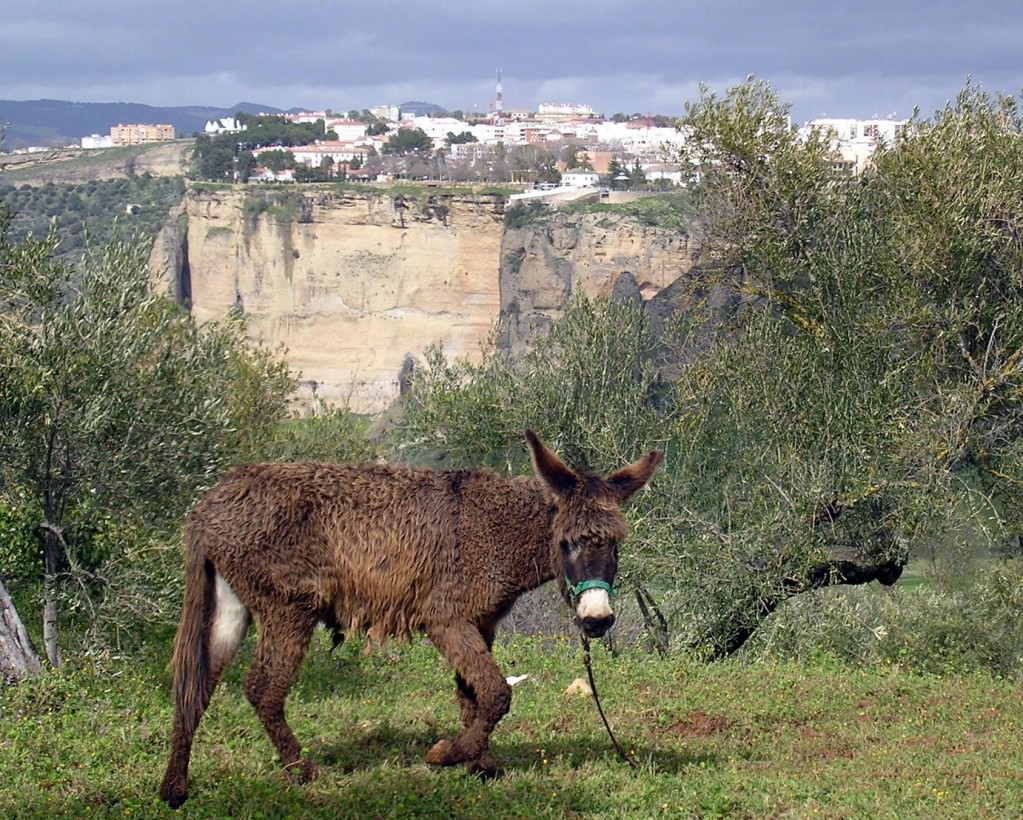 Donkey in olive groves with Ronda in the background

Awash in history, Ronda is one of those places that will capture your imagination. This city in the clouds is everything that European travel should be… romantic and oh-so-scenic with more than just a touch of the macabre and the strange in it’s past. I had first heard of Ronda just two days before I visited while sitting in a cafe in Granada and couldn’t believe my luck upon arriving. There’s no place on earth like this unique Andalusian city. After all, in Ronda, the rain falls up.

A Lot to Love in Spain’s Andalucia | EuropeUpClose.com

[...] Ronda Possibly the most dramatic setting for any city in Spain is Ronda’s, poised in mid-stride across the 400-foot-deep gorge cut by the Guadalevín River. Cross it on the lower medieval bridge or the soaring Puente Nuevo – the dramatically high “new” bridge built in the 1700s. The old Andalucia town is a charmer, at its center an historic bullring that was the birthplace of modern corrida de toros, where bull fighters stand on the ring instead of mounted on horseback. It is now a museum when not in active use. View from the Puente Nuevo in Ronda [...]

[...] Spain is a country of mystery and romance, and what could be mysterious than the city of Ronda, where the rain falls up! [...]

Ronda is extraordinarily beautiful. Let's hope the new railway tunnel doesn't come through as there will be environmental damage a.nd loss of jobs to the area

Amazing !!! This is the first time in life I came to know about such a fact like rain falling up.Its extraordinary...great photographs by the way.And super cool information.I'd like to know more about this rain falling up thing you know.I believe someday I'd be lucky enough to visit Ronda.