As I was searching for a place to stay for a week in Berlin ,  I was drawn to Schoenberg (in former West Berlin, near Charlottenberg) because of its central location (near Potsdamer Platz) and the choice of excellent hotels in the area. As I researched the area, I discovered how unique and colorful Schoenberg’s history and present culture are.

We stayed in the Hotel City B and were very satisfied with our experience. The rooms were quite large (by

European standards), with a kitchenette, dining area, flat screen TV, full bath and separate bedroom with a queen bed. The rates in March were very reasonable – our room was 89 Euros per night (smaller rooms were available for 59 Euros a night). The hotel was also very quiet- when we were in our room and walking down the hallways, we often felt like the only people there (which obviously wasn’t the case, given the number of people we saw at breakfast each morning). Hotel City B offers a substantial breakfast in its ground-level dining area. We enjoyed a wide selection of meats, cheeses, breads, spreads (jams and Nutella), yogurt, fruit, juice and coffee for 9 euros. When we stepped outside, the Bulowstrasse U-bahn station was conveniently located directly across the street. 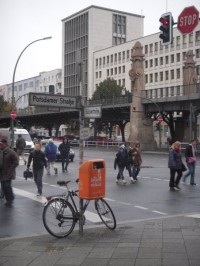 Schoenberg is known for its vibrant cabaret culture in the 1920s and 1930s and has been Berlin’s gay district since that time. Schoenberg has inspired many artistic creations such as Christopher Isherwood’s play “I am Camera,” which later became “Cabaret” (the musical). Today, most of Schoenberg’s cabarets have been replaced by their modern counterparts (bars and clubs), and the area is still incredibly vibrant.
Take a stroll up Potsdamerstrasse, Schoenberg’s main boulevard, and you’ll end up at the famous hub, Potsdamer Platz. While you’re there, be sure to check out Kulturforum Berlin, a multi-disciplinary, multi-building arts collective. The Kulturforum is located at Potsdamerstrasse and Scharounstrasse and the nearest U-bahn/S-bahn stop is Potsdamerstrasse. 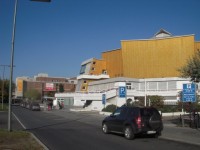 Institutions at Kulturforum (and the year they were constructed):