For eight centuries, devout pilgrims have crawled up the Grand Stairway of Rocamadour on their knees, doing penance. I didn’t climb the 200-plus steep, worn stairs on my knees, but I was mightily impressed by them. They carry the weight of history. This medieval town in southwestern France is carved right into the rock of a cliff, high above the Alzou River in the Dordogne/Lot region. The Grand Stairway rises from the lower commercial section of Rocamadour 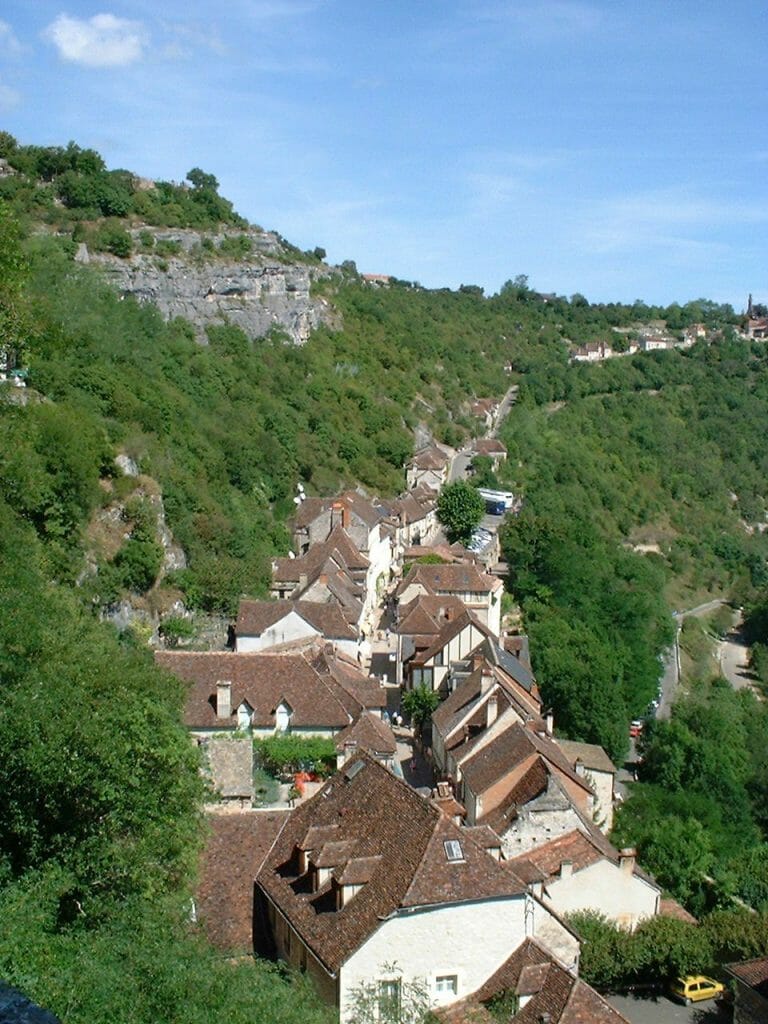 to a cluster of churches and chapels partway up the cliff.  Thousands of pilgrims, from poor peasants to royalty and powerful bishops, have come here from all over the world. Some of them attribute healing powers to the Black Madonna exhibited in this chapel. Nowadays the crowds are mostly tourists; some walk the stairs or pathway, others take the elevator, and a few still make the journey on their knees.  Those who walk the path pass the 12 Stations of the Cross.

Rocamadour became a pilgrimage destination after 1166, when the body of an early Christian hermit, St. Amadour, was discovered in a miraculous state of preservation and almost impossible to destroy. Some claimed he was Zaccheus of Jericho, an early Christian hermit. All kinds of miracles are credited to Rocamadour, from healings to sailors rescued at sea.  The saint’s tomb lies in the church of  St. Amadour, beneath the Basilica of St. Sauveur. Adjacent to the basilica is the 12th-century Chapel of The Virgin, where there’s a wooden Black Madonna said to have been carved by St. Amadour himself. There are some lovely old frescoes and paintings in the complex of churches and chapels that make up the shrine in this section of Rocamadour.

Jutting from the rock face above the entrance to the chapel is a broken sword that supposedly belonged to Roland, the nephew of Charlemagne and hero of “The Song of Roland,” the oldest surviving piece of French literature. Legend says that on the battlefield, when Roland was about to die fighting, the Archangel Michael grasped his sword, flung it away, and it stuck in the cliffs of Rocamadour. As usual, history and legend mingle freely. 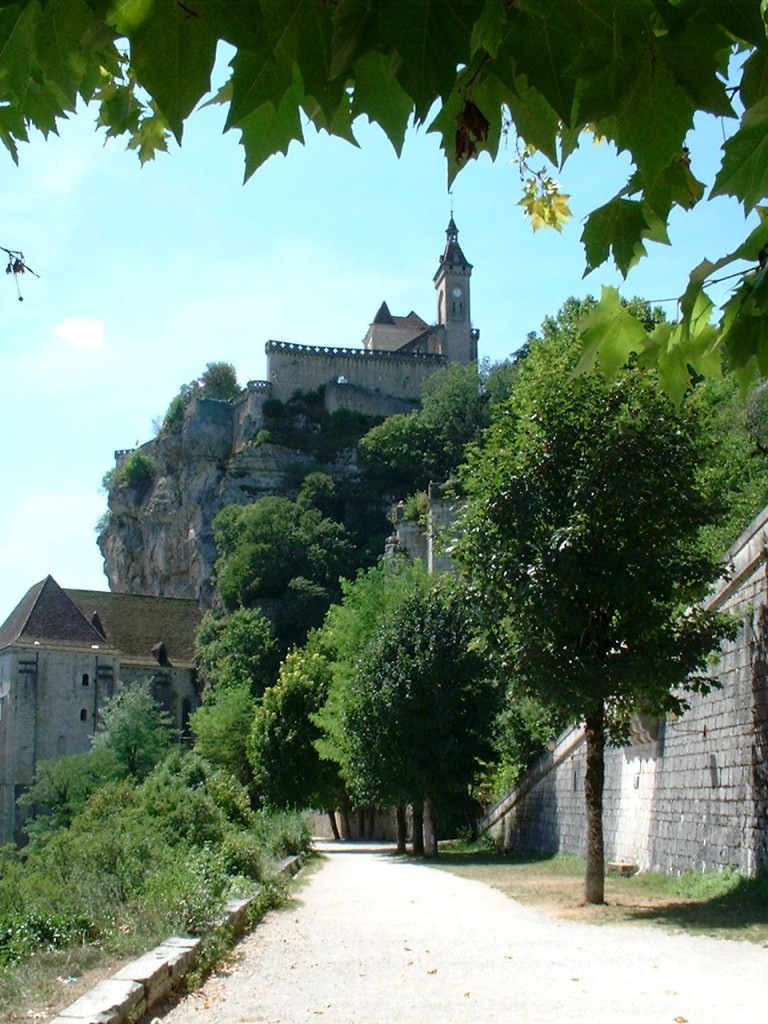 The third section of the town is the cliff summit, where a medieval chateau that was once a protective fort stands. The views from its ramparts overlooking the valley are spectacular. If you’re driving you can park near the chateau; the town is for pedestrians only (there’s also parking in the valley and a shuttle train that runs to town every 15 minutes.) For more stunning views and an unusual, fun trip through a world in miniature, go to nearby L’Hospitalet, also on the clifftop. Kids and adults alike enjoy “Euro Mini-Land,” a 45-minute animated show of little castles and people in a landscape of valleys and mountains.

You’ll get more out of a visit to Rocamadour if you spend the night, since it’s usually crammed with tourists during the day. Then you can walk around the enchantingly lighted town or ride the Petit Train de Nuit, which winds for 30 minutes through the narrow streets and has commentary in several languages, including English.

Les Esclargies is a nice lodging choice, a short walk from town. It’s modern, quiet, clean and comfortable.  Something quite different, and right in the heart of Rocamadour, is Best Western Beau Site. It offers up-to-date comforts but also the character and style of centuries past.  It also has a good restaurant, featuring local products – cuisine with a view.  A couple of miles from town is Les Vielles Tours, a 17th-century manor house. You might get a room in one of the two towers and enjoy an excellent meal and local wine in the intimate restaurant.

Other sites of interest in and near Rocamadour:
–    The “Prehistoric Cave of Marvels,” a short distance from the Rocamadour tourist office. It has interesting rock formations and 20,000-year-old cave paintings.
–    La Foret des Singes, a park where more than 100 monkeys live and swing in the trees.
–    Moulin de Cougnaguet, a medieval watermill still in operation.
–    Gouffre de Padirac, an amazing cavern with a lake.