Many people have heard about Croatia, but don’t know much about this wonderful country just across the Adriatic Sea from Italy. And the mention of Rijeka Croatia often leads to blank stares. 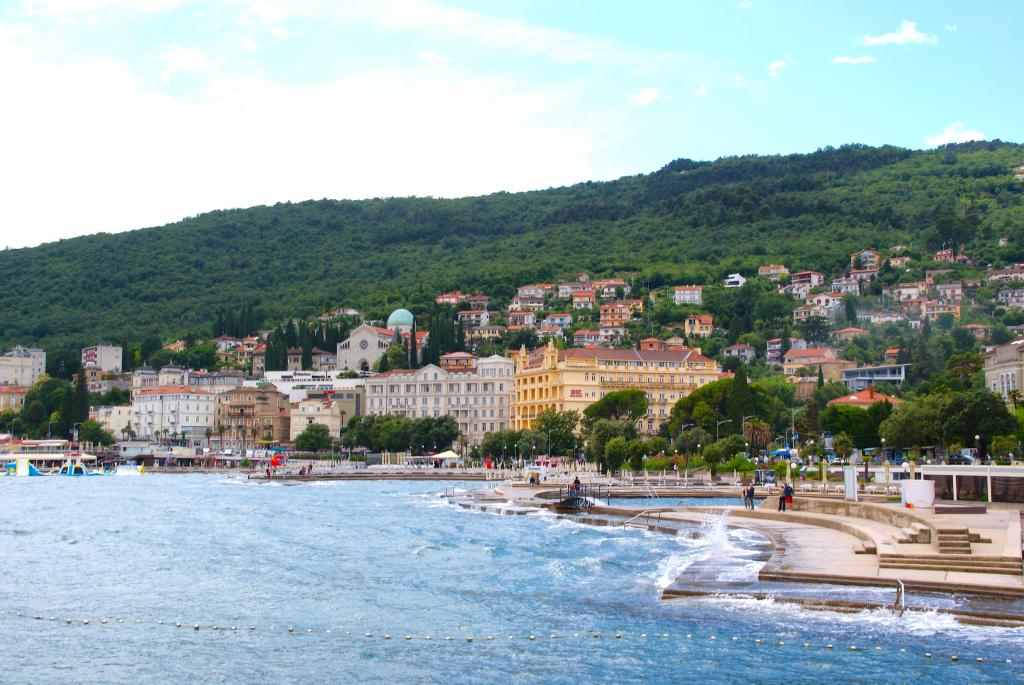 To much of the world, Croatia is the home to some of the most spectacular filming locations for Game of Thrones, Star Wars, and other Hollywood productions in the coastal cities of Split and Dubrovnik. Others are familiar with its capital, Zagreb. Perhaps others know Croatia as the home of tennis star Marin Cilic and their great World Cup soccer team.

Dubrovnik, Split, and Zagreb are indeed special places to put on your itinerary when visiting Croatia. But, as usually is the case, Croatia has so much more to offer than those places that get top billing. In a recent trip to this medieval wonderland, I had a fantastic time without visiting Diocletian’s Palace in Split or the always interesting Dubrovnik further south on the Dalmatian coast. And no film set for Game of Thrones.

What I did see in Croatia were spectacular waterfalls, historic sites, a myriad of cultural events, a cool computer and toy museum, majestic mountains and a scenic seaside. 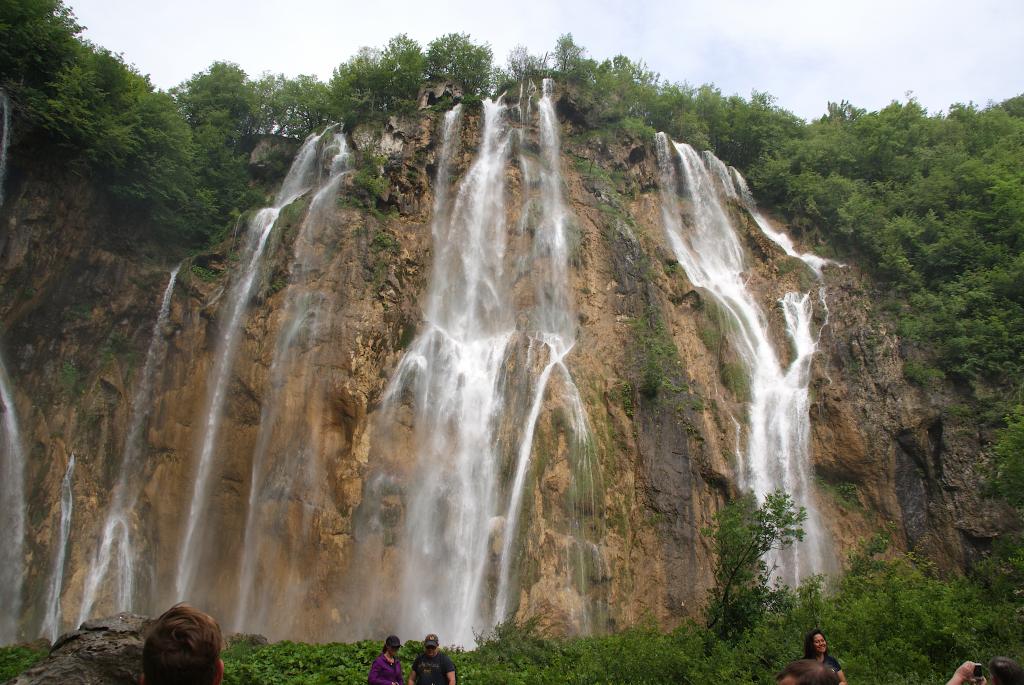 One of the fascinating places I was introduced to in Croatia was Rijeka, which has been designated the prestigious title of Cultural Center of Europe for 2020. As a result, it has joined the ranks of prior honored cities like Athens, Paris, Madrid, Stockholm, and Dublin.

Don’t feel alone if you don’t know much about Rijeka.

But that’s all about to change. The third largest city in Croatia, after Zagreb and Split, Rijeka is a city of 128,000 residents on the northwest coast of Croatia. It is known for a wide variety of cultural events, a cutting-edge music scene, lively shops and cafés, and beautiful views of the Adriatic. People can be at the beach in the morning and on the ski slopes in the afternoon.

>>Take a look at some Day-trip options from Rijeka Croatia

The Croatian National Theatre is an impressive sight. Designed by a Viennese studio in the 1880s, the lavish neoclassical building is reminiscent of those you might find in Budapest or Vienna. Entertainment ranges from concerts, ballets, opera, drama, and other presentations. Already with an impressive schedule of events, this theatre and other venues in Rijeka will be filled with a wide variety of cultural events in the coming years. 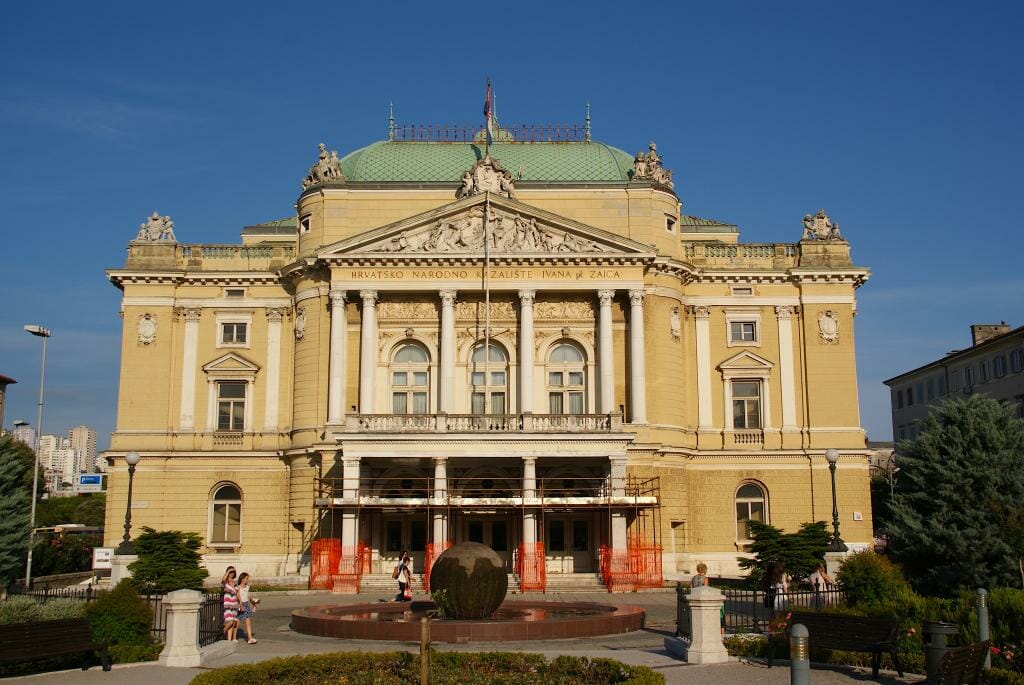 In preparation for 2020, Rijeka has scheduled numerous special projects and events over the next several years. This is in addition to the existing attractions of the city. It is a huge undertaking requiring the joint efforts and coordination of thousands of dedicated administrators and volunteers.

According to the official website, rijeka2020.eu, Rijeka’s Cultural Center of Europe campaign involves: 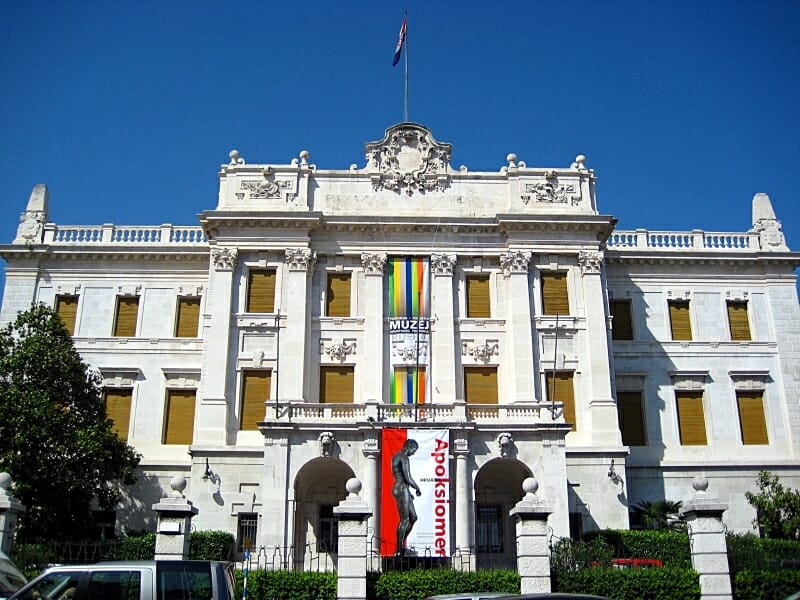 Formerly the Governor’s Palace, the Maritime and History Museum of the Croatian Littoral is an imposing white neoclassical building. Among many interesting exhibits about the culture and history of the city, including maritime equipment and artifacts, is an unexpected exhibit – a life jacket from the Titanic. When the massive ship sank in the North Atlantic on its ill-fated journey in 1912, it was the Carpathian, which had departed from Rijeka Croatia just weeks before, that came to the rescue of over 700 survivors. The brave crew of the Carpathian safely deposited the survivors in New York City before returning to Rijeka. One of the lifejackets found its way back to Rijeka with a crew member, eventually ending up in the maritime museum.

Another incredible example of neoclassical architecture is the beautiful Modello Palace. This impressive building, with its intricate stucco façade, was originally a bank. It now houses a grand hall and is home to Rijeka’s public library. 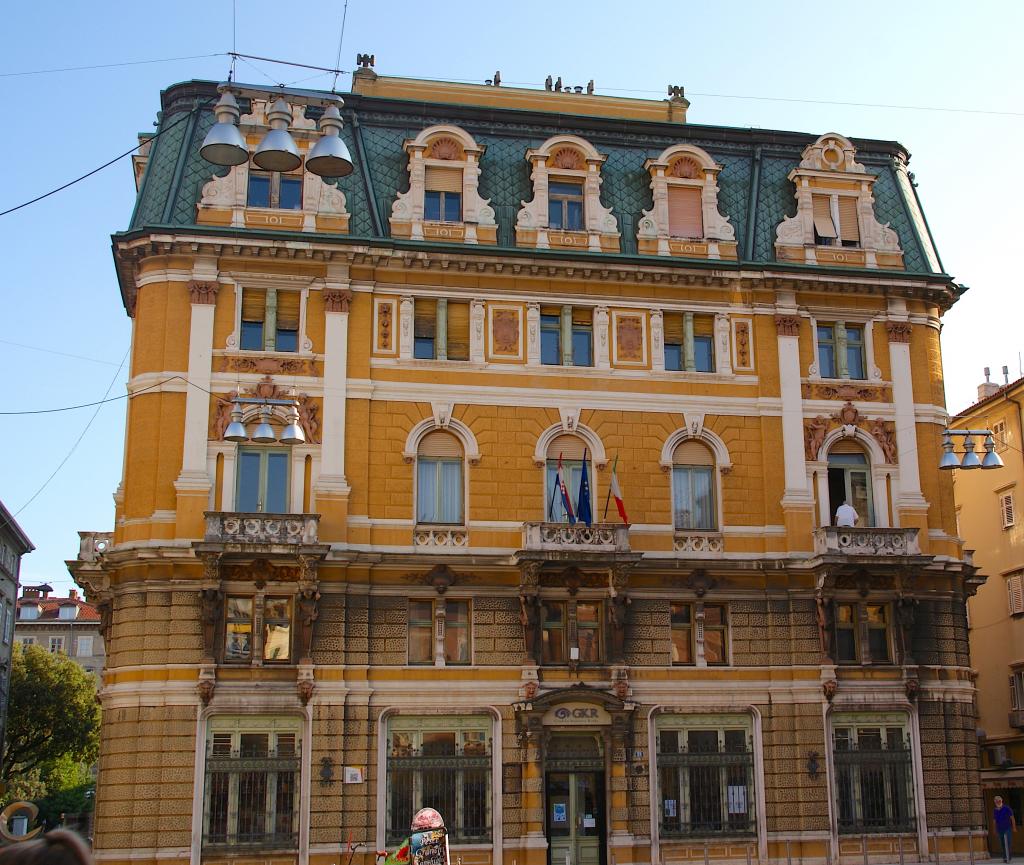 The torpedo was invented and manufactured here in Rijeka. Ivan Luppis, a retired naval officer, along with Robert Whitehead, a British engineer, designed and built the first prototypes in 1866. Since then, thousands of torpedoes were produced in the Rijeka factory, with a peak of 160 torpedoes a month in 1943. After going bankrupt in the 1990s, all that remains of the torpedo factory is an empty shell.

The Korzo, the wide and long promenade full of lively shops, cafes, and people cuts through the middle of downtown Rijeka, not far from the Adriatic Sea. Many of the buildings date from the 19th century, and the architecture is a sight to see. For example, Rijeka’s Fish Hall and produce market is a great place to experience the food and architecture of the city. The Fish Hall is in a metal and glass art-nouveau building erected in 1916. It has taken the place of a neoclassical edifice that stood there previously.

Trsat Castle sits atop a steep hill overlooking Rijeka and the Adriatic Sea. Owned by the Venetians, Habsburgs, and then by Field Marshall Nugent in the 19th century, this castle with the watchtower and statues of winged roosters has an impressive view over the Rjecina Gorge and the surrounding mountains and sea. 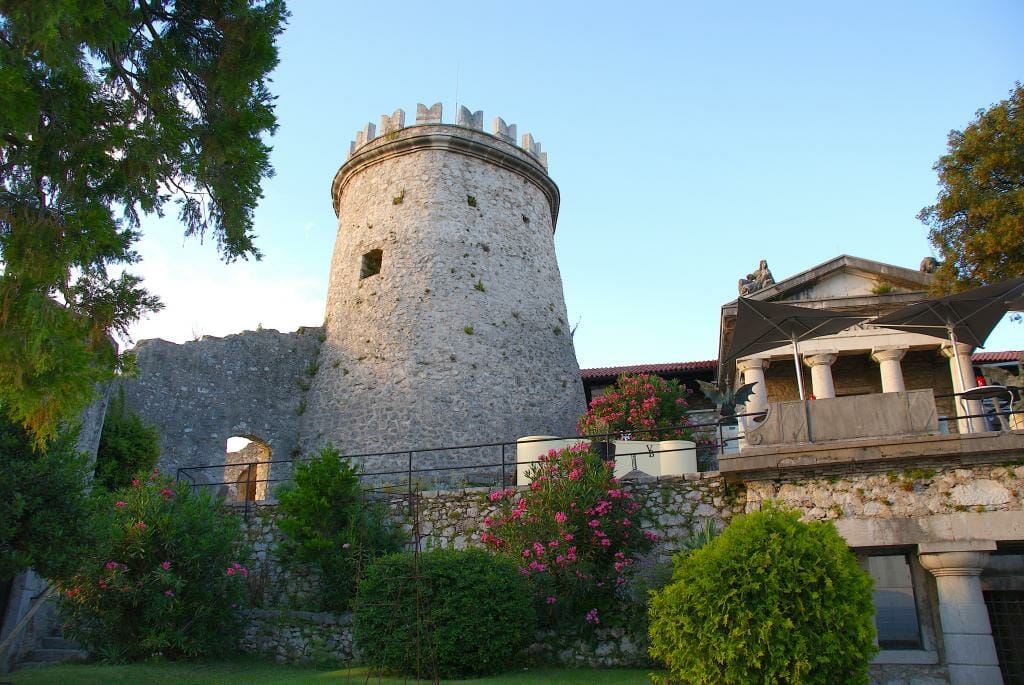 An intriguing Computer and Toy Museum

See why Steve Wozniak, co-founder of Apple, says the Peek and Poke Museum is at the top of his list when he gets a chance to visit Croatia, that the cool computer museum in Rijeka Croatia, “inspires others to do great things” in the world of computers. Working computers from Commodore 64, Sinclair Spectrum, and early IBM and Apple desktops are in the museum. Guests are allowed ot try their hand at many of them. 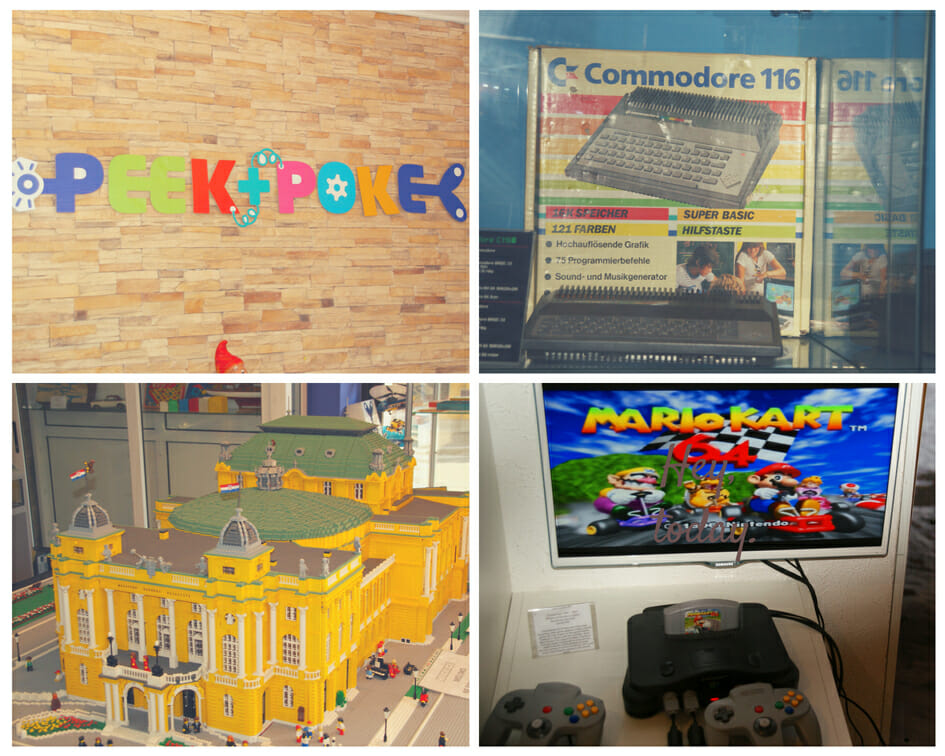 Just around the corner from Saint Vitus Cathedral and the Korzo city center, lies the intriguing Peek and Poke Museum. With no public funding, the museum relies on the contributions and support of private individuals and businesses. It is a fascinating look at the early days of computers, from IBM, Commodore 64, the Sinclair, and early Apple desktops that paved the way for today’s technology.

The Hotel Bonavia Plava Laguna is a centrally located hotel perfect for the guests visiting on business or pleasure. It is a perfect alternative for Rijeka Croatia hotels. Looking out my patio, I could see the ships in the harbor and extensive stretches of the Adriatic Sea. With a tradition of quality for 140 years, the renovated hotel is just off the Korzo. It is the main promenade of Rijeka, with its many cafés, shops, and festivals. The hotel offers a wellness center with saunas, conference rooms, and a rich buffet breakfast.

Steps from the entrance of the hotel is the wonderful Konoba Municipium restaurant. Just around the corner from the busy main street, this restaurant is known for its excellent seafood, with an assortment of Croatian, Mediterranean, and Italian dishes.

Guests have rave reviews for the fresh seafood dishes, including the swordfish, tuna, fish carpaccio, and flavorful fish soup. Other well-reviewed dishes include the steak with peppercorn sauce, risotto, and an excellent list of local wines. For dessert, try the delicious chocolate soufflé. 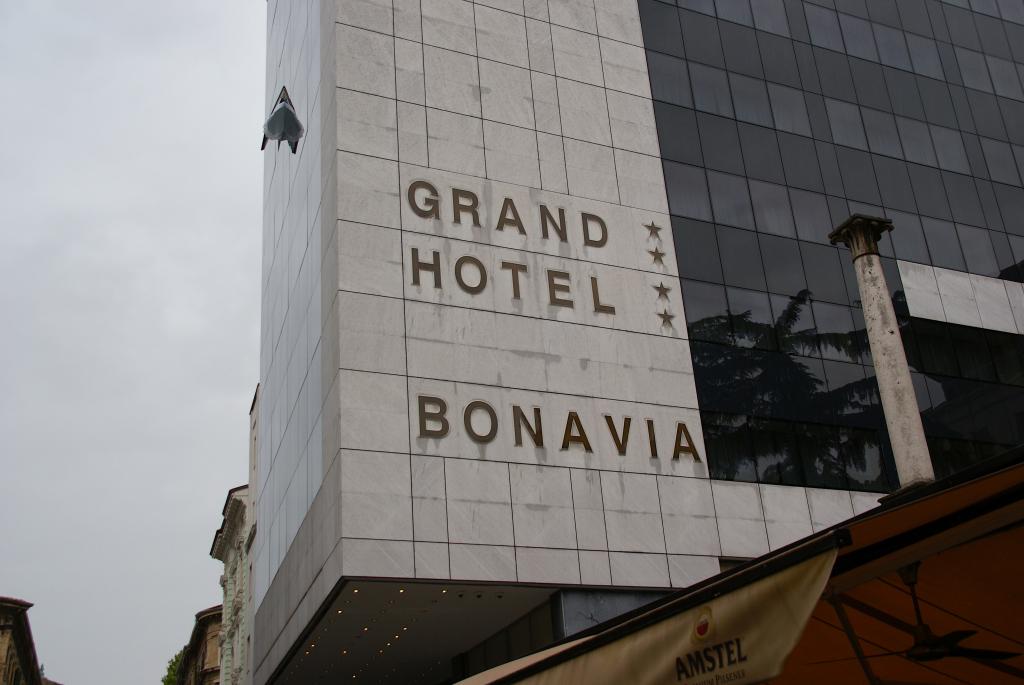 Things to do near Rijeka Croatia

A short twenty-minute drive from Rijeka is the picturesque seaside village of Opatija. The town was established as a spa and vacation spot for the rich and powerful. It is known as  the “Nice of the Adriatic.”  With a great selection of four and five-star hotels, the beautiful location on this secluded nook of the Adriatic Sea makes Opatija a top choice for vacation or that weekend getaway. 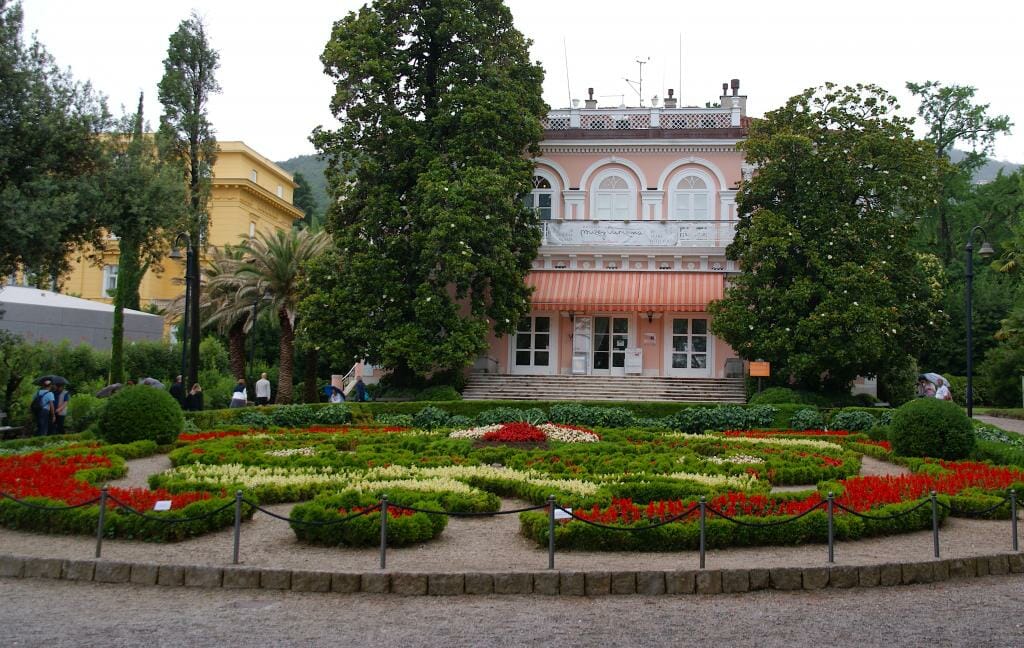 Villa Angiolini is an extravagant palace with formal French gardens built by wealthy merchant Iginio Scarpa in 1844. It is now used as a museum. Near the villa is the whimsical statue, Maiden with the Seagull. It stands on a rocky outcrop, which has become one of the symbols of Opatija. Another great attraction of the town is the seaside promenade that stretches 12 km along the picturesque coastline. It also forms a  7 km long walkway through the forest and gardens of the village. 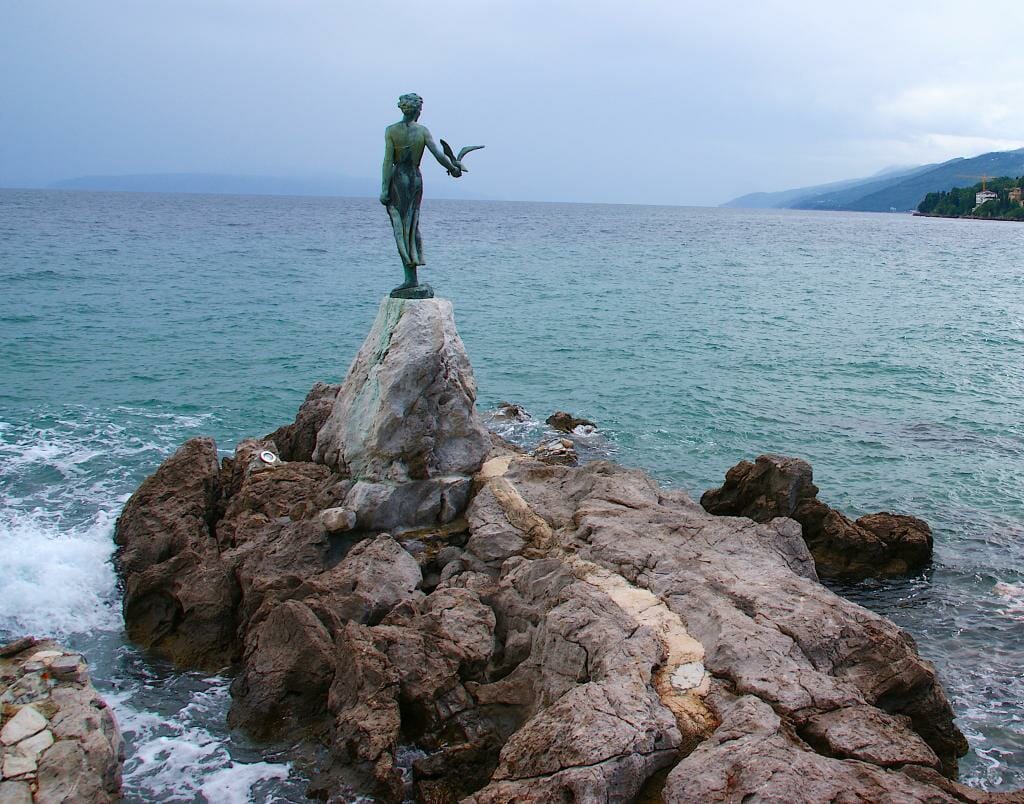 For fresh seafood and a wonderful view of the harbor, Bistro Yacht Club is a great place for lunch or dinner. I started with the flavorful fish soup, followed by the perfectly cooked sea bass, which was served with potatoes and a fantastic cream sauce. The smooth pannacotta with fresh berries was a grand finale to a great lunch. 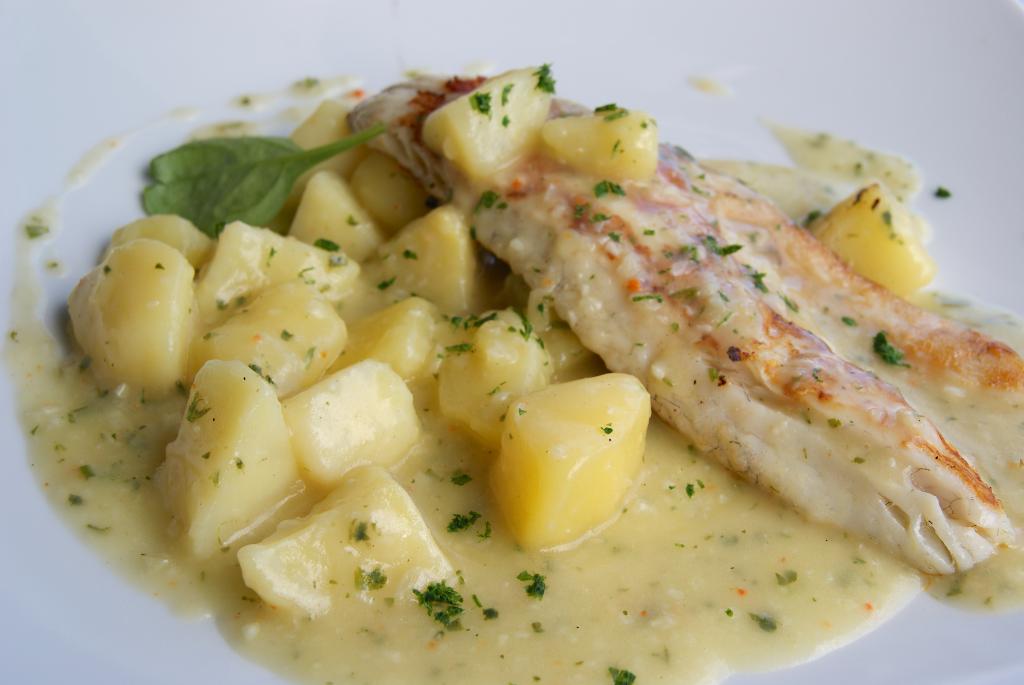 There are a few places on earth where time stands still as our senses soak in the beauty surrounding us. For a moment, nothing else matters. We forget about the mortgage payment, the fight with our girlfriend, and the stresses of work.

What we see and experience is so powerful, so magnificent, that we contently stop, look, listen, and enjoy. So soothing, so calming, and yet so exhilarating.

Plitvice Lakes is such a place.

It should definitely not miss in your Rijeka things to do when you visit Croatia. 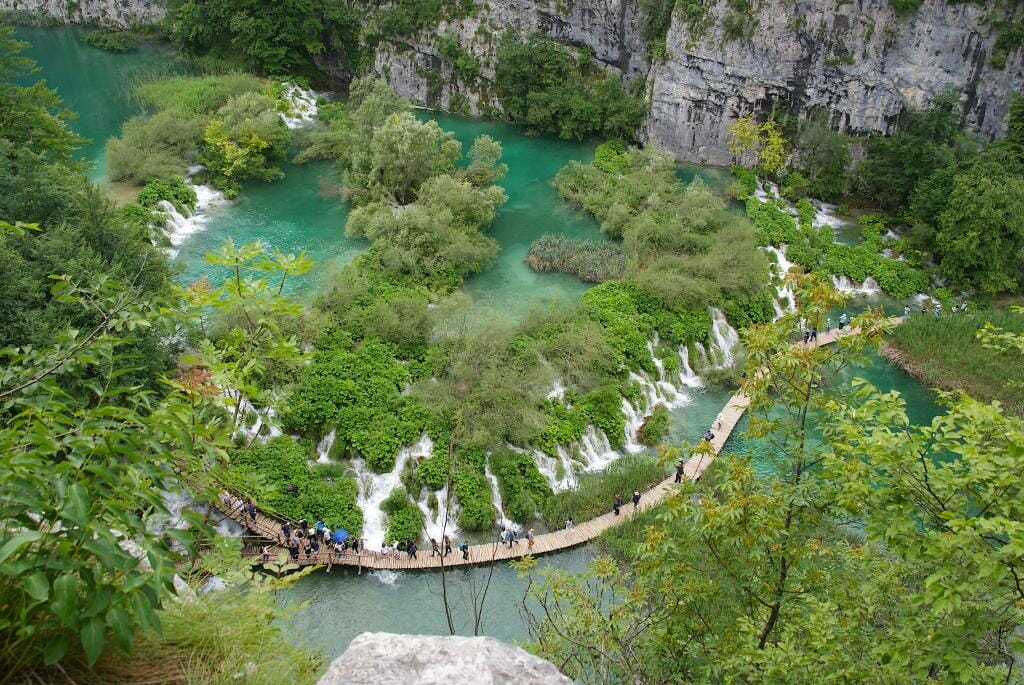 Numerous rapids, cascades, and waterfalls are interspersed with pools of tranquil waters, ranging in color from various shades of azure to green, grey, blue, and turquoise. Pictures and videos of this area are spectacular. But being there in person brings it all to life. Fed by waters from several small rivers and 16 lakes, locals have known about the splendors of the area for centuries. In 1979, Plitvice National Park was added to the UNESCO World Heritage register. 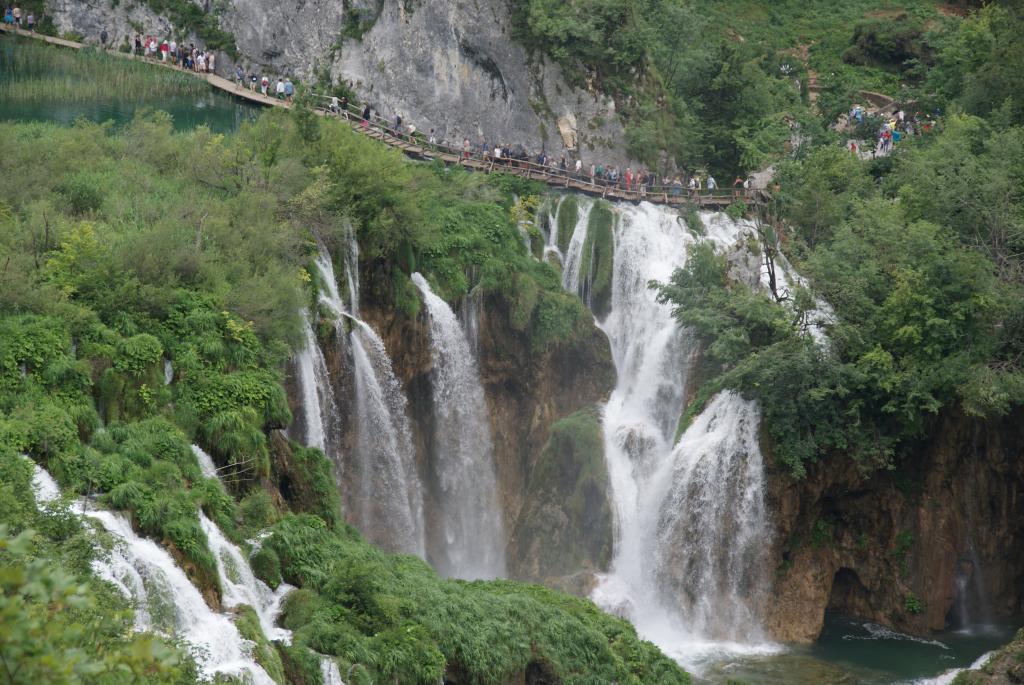 I am a big fan of Croatia. A rich history of culture. A mix of neoclassical and contemporary architecture. A beautiful landscape of mountains, lakes, rivers, waterfalls, and seaside. Friendly people. Wonderful city centers alive with shops, cafes, celebrations, and fantastic food.

Come, see Croatia for yourself, and you’ll be a fan too.

Cultural and Natural Wonders of Rijeka Croatia was written by Scott Kendall.

Thanks to the Croatian Tourist Bureau and the Rijeka Tourist Bureau for their hospitality and assistance on this trip. Also, thanks to the Grand Bonavia Hotel, Bistro Yacht Club Restaurant, and Plitvice National Park for complimentary stays, meals, and tickets. 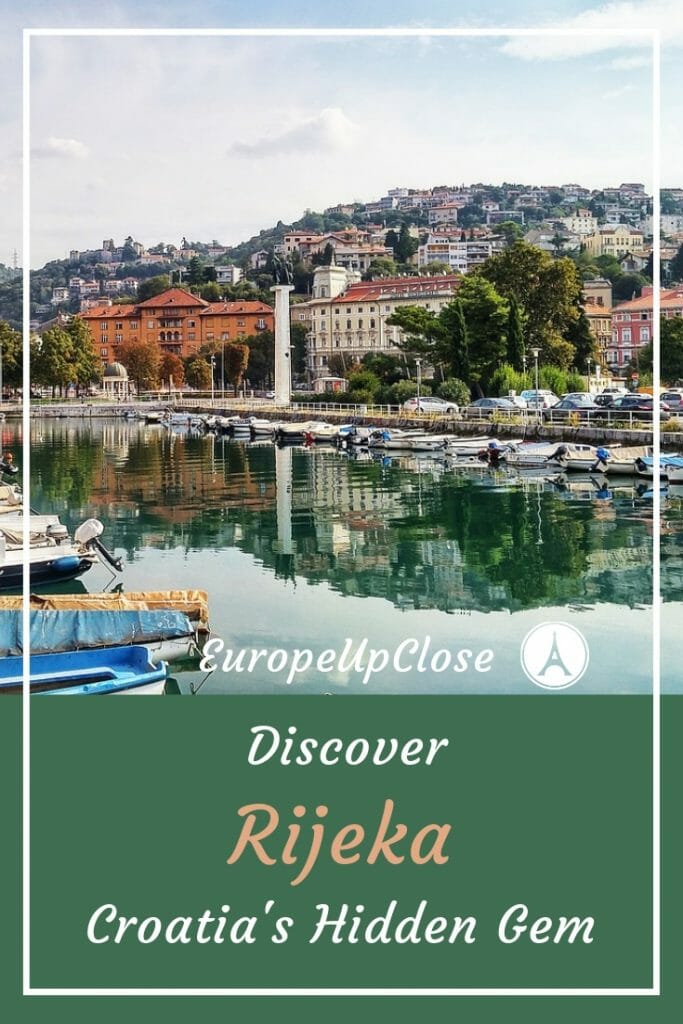