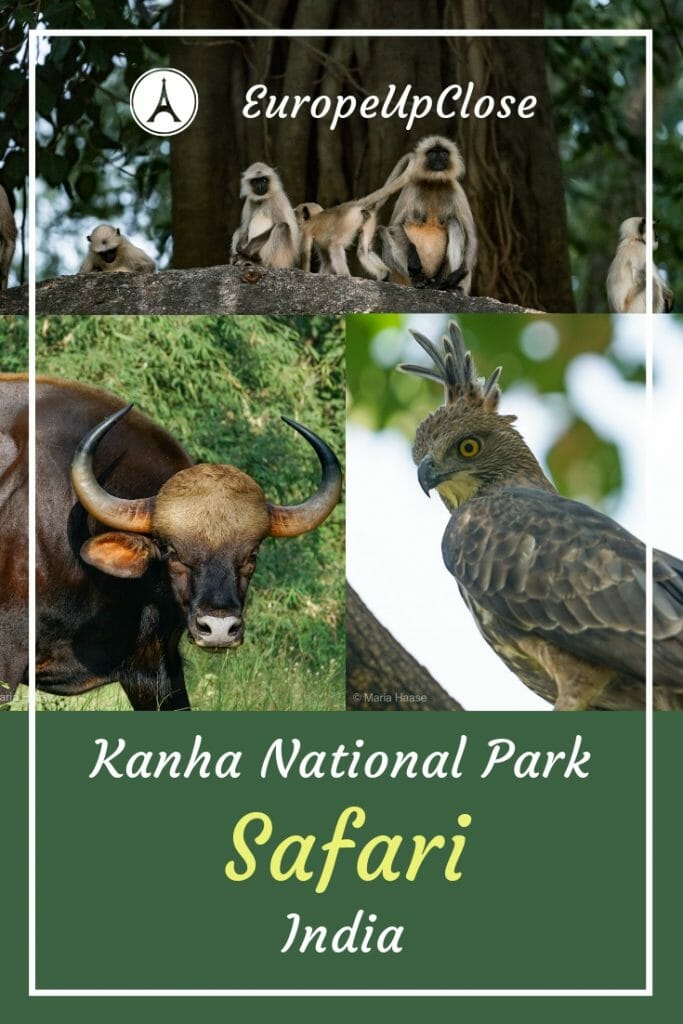 We all know the story of Mowgli, the little Indian boy in Rudyard Kipling’s Jungle Book that was raised by wolves in the jungle and his quest to fight the evil tiger Shere Khan together with his friends Baloo and Bagheera.

The Indian National Park Kanha, located in the heart of India in the state of Madhya Pradesh, was the inspiration to Rudyard Kipling’s famous Jungle Book. While Kipling was born in India and many of his books were inspired by his own experiences in India. Yet we cannot be sure if he ever visited Kanha National Park himself or if he simply was so fascinated by the writings of other authors, explorers, and journalists that he used their descriptions to bring alive the backdrop of this childhood classic.

India For Beginners:
If you are hesitant to travel to India by yourself, especially as a woman, I highly recommend using India for Beginners. This tour company focuses on trips to India for women, either as group trips or as solo travel experiences. They offer a fantastic wildlife experience in Madhya Pradesh, and if you use my code UpClose5, you will save 5% on your custom itinerary or group tour.

Before coming to Kanha National Park, do not forget these 3 important points:

Kanha National Park opened its gates in 1955, making it one of the oldest National Parks in India. Its core zone is 940 km2 and its surrounding buffer zone is an additional 1067 km2. Together with the neighboring Phen Sanctuary, this makes up what is known as the Kanha Tiger Reserve – the largest National Park in Central India.

The landscape at Kanha National Park is absolutely stunning. Sal tree forests are broken up by golden meadows, while in the higher regions, you have lush bamboo forests with thick foliage.

Tourists can visit 5 Core Zones in Kanha National Park: Mukki in the South, Kanha in the Center-East, Kisli in the Center-West, Sarhi in the North and Phen as a Satelite Core Zone.

National Park Kanha is open from October 16th to June 30th and is closed during the monsoon months.

The Barasingha is probably the park’s biggest success story. In 1960, there were only 66 Barasinghas at Kanha National Park, but due to breeding and conservation efforts, this number grew to over 400 now. Large mammals like the Barasingha or Axis deer are an important element of the food chain to support a growing number of large predators like tigers, leopards, and sloth bears.

With over 300 species of birds, Kanha National Park is a Birder’s paradise. Over 300 different species call the park their home, many of them rare and absolutely stunning.

The wildlife at National Park Kanha is a real treat and with one of the highest tiger-densities in all of India’s National Parks, your chances of spotting Shere Khan are pretty high.

The Kanha Tiger Reserve is perfect for experiencing a safari. The open meadows make wildlife and bird watching a treat.

The easiest way for your National Park Kanha Safari booking is by just booking it through Kanha Earth Lodge (read more about why I love and recommend this luxury eco-lodge below). They offer a great deal for a combo-pack of an overnight stay, full room & board, and 2 daily safaris, as well as a varied activity program.

If you want to be more flexible, they also offer a pick and choose Kanha safari booking, where you pay for your overnight stay at Kanha and then just pick for the individual activities for each day. The cost for a Kanha safari booking is 9500 INR per jeep for any zone for a morning or afternoon safari.

For serious wildlife enthusiasts, but especially for wildlife photographers and videographers, you can also book a full day safari at Kanha, which allows you to stay in the park from Sunrise to Sundown and visit all zones in the park. That means between the regular morning and afternoon safaris, you have Kanha National Park practically to yourself, as only very limited numbers of those full day safari tickets are sold. However, this privilege comes with a price of 85000 INR per jeep.

No matter what Kanha safari you book, you will have a driver, a trained Naturalist from Pugdundee Safaris and a local Tracker from the Forest Department.

Always remember to book early, as the Forest Department at Kanha National Park only gives out a limited number of permits each year and you want to make sure you get the best zones and all the times you want.

The temperatures in Kanha Tiger Reserve go from just below freezing (November-February) to scorching hot 110 F (43 C) in April – June. If you can tolerate the heat, you have better chances to spot animals in the summer, as the foliage is not as dense and the animals congregate around the waterholes. The most picturesque season is Winter though when you might have the chance to see a Tiger in the frosty meadows.

Remember that the Park is closed from July 1st to October 15th each year because of the Monsoon. When the park first opens in October, Trackers and Naturalists still have to find out, where the new territories for the Tigers are, as they tend to shift over time. However, you also have fewer tourists during the beginning weeks of the season and often feel like you are the only jeep in the park.

Kanha National Park Location & How to Get There

Kanha Earth Lodge, run by Pugdundee Safari, is an incredible luxury lodge/resort at Kanha National Park. The property only has 12 bungalow-style suites that offer all the luxury amenities of a 5-star resort, but also make you feel connected to nature and your beautiful surroundings.

I have been invited by Pugdundee Safaris and stayed at 3 of their properties so far: Kings Lodge and Tree House Hideaway in Bandhavgarh National Park (you can read about this experience here) and Kanha Earth Lodge and I have not experienced anything but amazing service and met some incredible people.

This is one of my favorite points about Kanha Earth Lodge and the other Pugdundee Safari Lodges. They take eco-friendly products and sustainability very seriously. They don’t just talk the talk there. Guest are provided with reusable water bottles and filtered water, instead of using plastic bottles. They built the bungalows in natural openings in the jungle, so no trees have been chopped down and they use eco-friendly building materials and local craftsmen to build the houses.

For Pugdundee and its employees, animals and nature preservation go above profit. They will do their best for you to see as many animals as possible, but they will not sacrifice their ethics along the way and do anything that could harm you, the animals or the surrounding nature. Kanha Earth Lodge has received numerous awards, including India’s Leading Wildlife Resort in 4 recent years.

My favorite experience at Kanha Earth Lodge was the sundowner. In the late afternoon, the two naturalists at Kanha Earth Lodge took me on a beautiful walk up the hill behind the lodge. It was like a mini walking safari, as they pointed out the fauna, the birds and other wildlife to me, told me stories about the locals and their lives as Naturalists with Pugdundee Safari.

After we made our way to the top of the giant granite boulder, we had an incredible view over almost all of Kanha Tiger Reserve. The view over the jungle valley in the golden light of the late afternoon was radiant.

To my surprise, 2 more Kanha staff members greeted us at the top and had prepared a beautiful sundowner for us with tea, coffee, and delicious snacks. They even brought us chairs, so we could sit down and relax as the sun was setting over the valley in front of us. I was mesmerized by the beauty of the landscape and the stories about wildlife encounters and I wish this moment has turned into one of my favorite memories of my trip.

Another reason why I love Kanha Earth Lodge and Pugdundee Safari so much is the staff. Pugdundee hires around 80% of its staff from local villages. This not only boosts the income of the locals and their families but also protects the environment and the animals. I experienced incredible service from the staff at Kanha. Each and every staff member went above and beyond to make sure I had the best time.

So if you are visiting National Park Kanha, I can only recommend staying at Kanha Earth Lodge. I can’t wait to go back there – hopefully again soon!

Loved reading your post. It reminded me of my trip to Kanha years ago. Are tigers not frequently seen nowadays?

Back in 2012, they used to take people off road on elephant back to see tigers deeper in the forest. The mahouts tracked the cats in advance. Which, in the light of what we now know about the cruelty that captive elephants are subjected to, seems like an incredibly unethical experience. I often beat myself up for having participated in it. Does the park still offer this option?

I totally agree about the variety of species you see in Kanha. There is so much more to it than tigers.

Great article. Thanks for sharing.

India has been on our bucket list for a long time. There are so many places we want to see, we couldn't fit them into our visa time...even though as Americans we can spend 6 months there at a time.

We've done the Golden Triangle route - check! - and now we can give ourselves permission to see other places. Among our long-held goals is to do a tiger safari. My husband Dan is a professional photographer and it's a dream of his. I'd never heard of Kanha National Park before but it sounds like it would be a perfect idea. Thanks. :)