When one hears the words “European wine,” typically French Cabernet and Italian Lambrusco, or perhaps German Gewürztraminer, come to mind. Though Portuguese wines have become increasingly popular in American restaurants (especially the Vinho Verde varietal, and Port has made a resurgence in popularity), 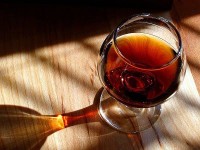 tourists often envision Portuguese wines as subprime to their French and Italian counterparts. Totalmente o contrário!  Portuguese wines are complex and delicious, and the Minho and Douro wine regions of Portugal, though more rugged and less touristy than the Loire Valley or Tuscany, offer just as much charm. 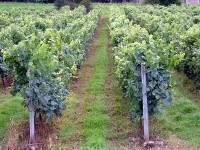 Minho is located in the northwest corner of Portugal, adjacent to Spain’s Galician province. The Minho region produces sharp reds and softer whites. Vinho Verde, perhaps the most popular Portuguese wine today, is from this region. Its name literally means “green wine,” a reference to the wine’s “youth.” Vinho Verde should be consumed soon after it is bottled, which means it is very reasonably priced. Wines from this region that are better with age are labeled as Reserva or Garrafeira, and cost a bit more. Vinho Verde is typically a white wine- fresh, fruity, and perfect for summertime. I recently learned that Vinho Verde can also be red, but red Vinho Verde is rarely exported. It is more acidic tasting than its white cousin and bright magenta in color. 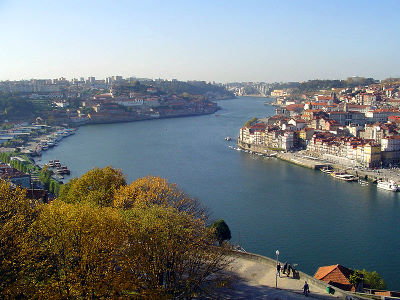 The Douro Valley, located in the northeastern part of the country, is separated from the Minho Region by the Douro River. The wine production area of the Douro Valley extends along the Douro River, as well as along its tributaries that run from the Spanish border to roughly 100 kilometers outside of Oporto. Port, Portugal’s most famous wine, is produced in this region. Though there are many countries that produce versions of this sweet, heavy wine, authentic Port (called Porto) only comes from Portugal’s Douro region.
There are 165 grape varietals in the region, however the five main red varieties are Touriga Nacional, Tinta Roriz, Tinta Barroca, Tinta Cão, and Touriga Francesa. The four most common whites are Malvasia Fina, Viosinho, Donselinho, and Gouveio. Touriga Nacional is widely recognized as the best grape for red Porto, and white Porto is made from a blend of Malaysia Fina and Viosinho, Donselinho or Gouveio.

Thanks for the geographical clarification and the additional info!

Geography apart, there are a lot of options for those who'd like to go on a wine tasting tour, especially on the Douro. Probably the most interesting, in my opinion, is doing a river cruise on the Douro. Those cruises offer cultural excursions on land, namely trips to the Quintas (vineyards) where the grapes are harvested and the wine produced.

September is the month of choice to go to the Douro as it's the wine harvest season. Several Portuguese tourism agencies have special programs that allow people to experience all the tradition of the wine harvesting in the Douro region. For instance DouroAzul, a cruising company that operates in the Douro River, as a special Wine Harvest program with 2 day cruises that allow passengers to participate in the harvest as well as tasting the wines. There are other options for those who don't like cruises, as a trip by train or bus organized by several travel agencies of the region.

For those who which to visit the Minho region, I think it's best to do it by car (renting one) as that region has very good roads and it's not hard to reach the most famous vineyards of the region.