Germany has worked hard to process and overcome the violent and tragic legacy of the Third Reich. The country’s post-war constitution declares Holocaust denial to be a crime. Persons responsible for atrocities committed under Hitler’s regime have been brought to trial and are to this day prosecuted under German law. Most recently, a 90 year old former Wehrmacht officer was sentenced to life in prison for the murder of Italian civilians during the final days of World War II. 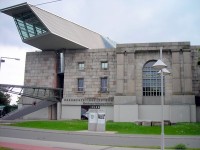 Yet there has also been great discomfort with displaying and discussing reminders of these dark and evil times. When it comes to public history, Germany has not always openly addressed its past link with the Nationalist Socialist Party. Textbooks held abbreviated history, Nazi-built structures were torn down or quickly reused with little acknowledgment of their former significance. Brushing over controversial history is not unique to Germany. Until recently, few preservation efforts were made regarding the history of racial segregation in my own country. Now those in the fields of historic preservation and museum studies in the United States are making concerted efforts to educate the public regarding segregation and other controversial history. 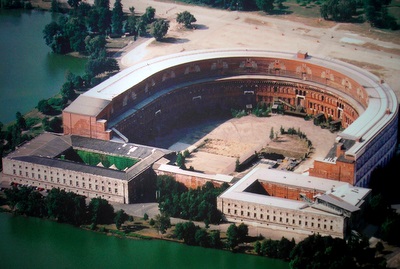 Returning to Germany, the city of Nürnberg, itself the center of Nazi propaganda activities, has recently opened an impressive museum addressing what much of the country has previously ignored. The Dokumentations Zentrum, or DokuCenter, is housed on the former Nazi Party Rally Grounds. The exhibition space is laid out in the north wing of the Kongresshall. This building was constructed by the National Socialist Party to house 50,000 spectators at party rallies and conventions, but the massive building was never completed. 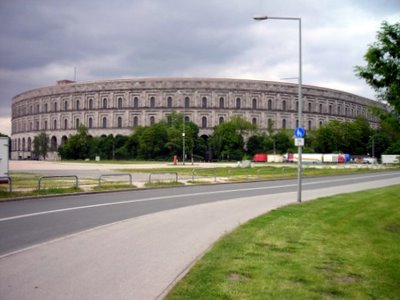 The Doku Zentrum museum itself presents the activities of the Nazi Party as objectively as any museum could. Upon paying a small fee, visitors are given hand held auditory guides in their language of choice. The museum is self-guided. Both permanent and temporary exhibits occupy the north wing. “Fascination and Terror,” the permanent exhibit, documents the rise, context and consequences of the Nazi Party. The primary focus lays with the impact of the National Socialists in Nürnberg. The main exhibit is divided into nineteen, chronologically placed areas. Topics such as the history of the party rallies, architecture of the National Socialists, the “Nürnberg Racial Laws,” and the “Nürnberg Trials” are all addressed in great detail. The Exhibit panels are hung suspended from floor to ceiling, with the text written both in German and English. Numbers are assigned to corresponding panels so visitors can enter these digits into their auditory devices to listen to the text. The museum is visually based, laden with historic images and well-positioned monitors playing newsreels, interviews and other film clips.

What is most impressive about this museum is the manner in which the National Socialist Party is discussed. Members and supporters of the party, which in Germany during the 1930s and 1940s meant nearly everyone, are neither vilified nor victimized. The visitor is given blunt facts and left to interpret the information as he or she chooses. More and more cultural institutions are approaching controversial history in this manner. Rather than spoon-feed their audiences, they allow people to leave their exhibitions ready to form their own opinions. The Holocaust and other horrendous atrocities committed by the Nazis are presented in the exhibit, but so are propaganda materials and examples of the fervor the National Socialists brought to Nürnberg. And the museum also acknowledges the difficulties the city and the whole of Germany, for that matter, has with preserving and interpreting the architecture of the National Socialist Party. 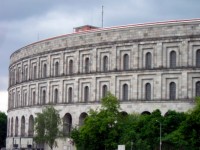 Before touring the exhibit, the visitor is invited to watch a short film depicting 21st Century youth skateboarding amongst ancient looking buildings. Once the camera pans out, these structures are revealed to be construction remaining from the Nazi party rally grounds. Such buildings exist here and elsewhere in Germany and until recently have been decaying and ignored by the country. The Doku Zentrum has taken great steps in breaking the polite silence and publicly addressing this period in Germany’s history and presenting the significance of architectural, visual and auditory remainders of the time.

This is very interesting. I think it is important that this museum has embraced the past whether it be good or bad and presented it to the public. Great post, thank you.