It is just before noon on a bright and clear Wednesday afternoon, and I am on the hunt for a new street. Crossing Piazza della Repubblica with five potentials scrawled on an index card, I suddenly realize I need lunch—and fast. I have only so much time so I need a spot quick and delicious. I know just the place: the panino/wine bar in the wall, I Fratellini (38/r), on via dei Cimatori. 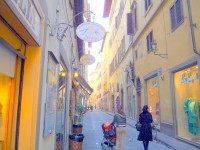 I stand on the sidewalk munching a panino lightly oiled with peppers, pickles, and a thin slice of eggplant. The sounds of Italian, American, French accents cascade around me as tourists and locals alike huddle in front of the menus. As I move aside from the growing crowd, I look up and notice on the wall across the street a small sculpture inlaid in the wall. It appears to be a strange combination of horse and bird. Someone at some point wanted to make sure that this particular fragment of the underlying layer of wall was left exposed.
This is just the kind of thing that sparks my curiosity about a street.

The noon bells from Chiesa di Orsanmichele peal as I step away from the crowd and wander, forgetting about my list of other streets. Orsanmichele’s bells sound so much crisper and tinnier than those of the Duomo down the street. The Duomo’s sound more muffled, but they plod on past the time when Orsanmichele’s have stopped.

The outer layer of this street is its overt appeal to tourists. It is, after all, two short blocks away from Piazza della Signoria. The shop next door to I Fratellini sells “Original Florentine Ceramics Our Production” (34/r). Perched outside is a chair and miniature work table so passersby can watch the artisan at work. Across the street is a t-shirt shop (Florence Curiosity Shop, 23/r), with a colorful display of every soccer jersey imaginable. A trattoria has a blatantly English menu, and a minimarket offers “Cold drinks and snacks.” The merchants know their audience well.

Artisanal work is connected to the name of this street. Cimatori, as Mark Roberts clarifies in his Street-Names of Florence, refers to the cloth cutters that once worked on this street. These artisans were famous for their finishing work on the cloth that the famous Calimala guild, the Arte di Calimala (“dressers and dryers of foreign cloth”), exported.

Continuing toward via dei Magazzini, the street’s end, I spot a short alley, the Vicolo (“alley”) de’ Cerchi. The Cerchi were a wealthy family who lived here in the 14th century. I can’t enter the alley because of renovation work, but I can see the grand stone façade of the building on the right—Roberts tells me that this was the former palazzo used by the Priors before Palazzo Vecchio was built.  Not too far down the street Cimatori intersects with Via de’ Cerchi. On the northwest side is the Tower dei Galigai, built between the 12th and 13th centuries. The powerful Galigai family was known for its expertise in tanning leather. Dante even mentions a member of the family in his La Divina Commedia (Puccio de’ Galigai in the Inferno).

The Tabernacolo del Canto alla Quarquonia, a 17th-century fresco of “St. Phillip Neri with the Urchins,” by Alessandra Gherardini, adorns the northeast corner. The fresco contains a once-illuminated wrought-iron cross that would signal to passersby that there was an orphanage here, the Pia Casa del Rifugio. On the southeast corner, a bricked-up façade hides a beautiful loggia, according to Roberts. You can still see, however, the engraving in the corner wall that says “Loggia dei Cerchi.”

Moving on, I arrive at the Piazza dei Cerchi. On the western edge is a shop offering audio walking tours (AudioGuide, 9/r). It also happens to have a gorgeous brick arched doorway and doubles as an art gallery. The Taverna Divina Commedia brightens the east corner with its warm red sign and welcoming curtains behind the door. A tourist couple walks up to the menu standing on an easel just outside.

Besides this, there doesn’t seem to be much going on at Piazza dei Cerchi. The graffitied metal doors of Bizzarri and a leather goods store—again, with English in its sign—are the shops that face the street. I wander deeper into the piazza and notice in the corner a very attractive entryway that appears to be an office. I see two people working at a desk, lit by a little lamp. I start to walk away but as I turn I spot an enchanting colorful mural inside. Ah, a gallery! I try the door but it’s locked. The woman leaning over the desk looks up. She is tall, elegantly dressed, and beautiful. She greets me with a smile and tells me I’m welcome to come in. 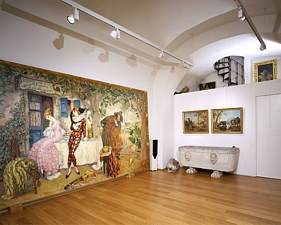 I spend the next half an hour or more talking with general manager Yaya Gatti (the tall, elegant woman) and owner Stefano Conte of CAMI Arte (via della Condotta, 36/r). They very kindly explain my error in entering through the piazza; the proper entrance is on via della Condotta. But no matter, Stefano is happy to personally show me their exhibit. There are 16th century religious paintings alongside contemporary portraits, landscapes, and as well as a fresco. An American is being featured, Marc Dalessio, whose visits to Florence have inspired his landscapes. As much as I tend to favor uncovering the old Florence, I’m encouraged by this. This mix of worlds instantly appeals to me, as does the fact that I am sitting here, afterwards, in their office chair chatting away comfortably about art and Florence to near strangers. They ask me for coffee, but I’m running out of time so I tell them I will certainly be back.

I continue making my way down Cimatori, and am struck by the stark decay of the Supercinema (6/r). Its doors are splattered with graffiti and the wall behind the sign is so cracked you can see a layer of grey underneath the mustard paint. And yet, something elegant remains: Above the doors hangs a frosted glass canopy attached by wrought-iron brackets and, somehow, delicate bursts of green fern on top that dangle over the edge of the glass.

Sometimes I get carried away wanting to find the hidden Florence; I make the mistake that what is ancient carries more weight, just by the fact that it seems more secret. A medieval sculpture subtly revealed in a wall can inspire a walk where I deliberately pay attention. But maybe life is better spent not only diving into dusty secrets, but giving equal weight to what is charged with life now. The lively conversation at the gallery, the green ferns over the dilapidated theater, and the chatty crowds at I Fratellini may leave no record behind of its existence, yet they are just as much the “real” Florence as any medieval tower.

This story was originally published in The Florentine.