Prague is undeniably a magical city, a beautiful tourist paradise rich in history. Prague’s top sights are stunning and plentiful and could fill your itinerary for many days and then there are also many day trips from Prague that are worth taking. But a visitor who was a student there 45 years ago reveals a different city hidden in plain sight, one with a drab, painful, and very recent past. Travelers just need to know where to look.

My friend Mike spent five months – from January to May of 1969 – studying in Prague and Brno with Portland’s Lewis and Clark College. These 22 students were with the first American group issued visa’s since World War II, and life in Prague was indescribably different from the glitzy tourist Mecca of today. Take Wenceslas Square, the heart of the city then and now. Today it is lined with Western goods, innumerable food carts, and even a Nike store. Today it is full of tourists, street performers, lots of color, and plenty of action. 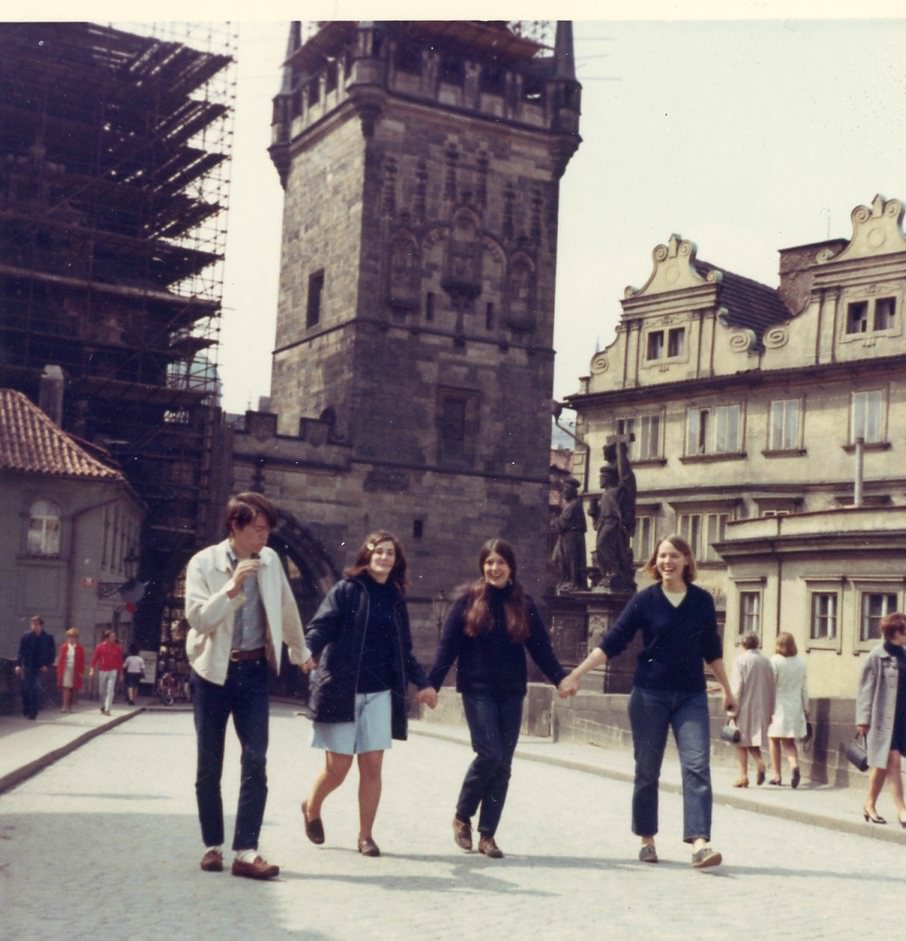 These American kids definitely stuck out. Think it was the jeans?

In 1969, tram tracks ran the full length of the square while armed Soviet soldiers patrolled, unsmiling, and always in pairs. Auto traffic was nearly nonexistent and consisting mostly of gleaming Tatra sedans ferrying Communist Party officials. The few food carts that could be found served kielbasa with rye bread and mustard. And, small children brought home the family beer in plastic buckets, which was served for breakfast, lunch and dinner – all day, in fact. 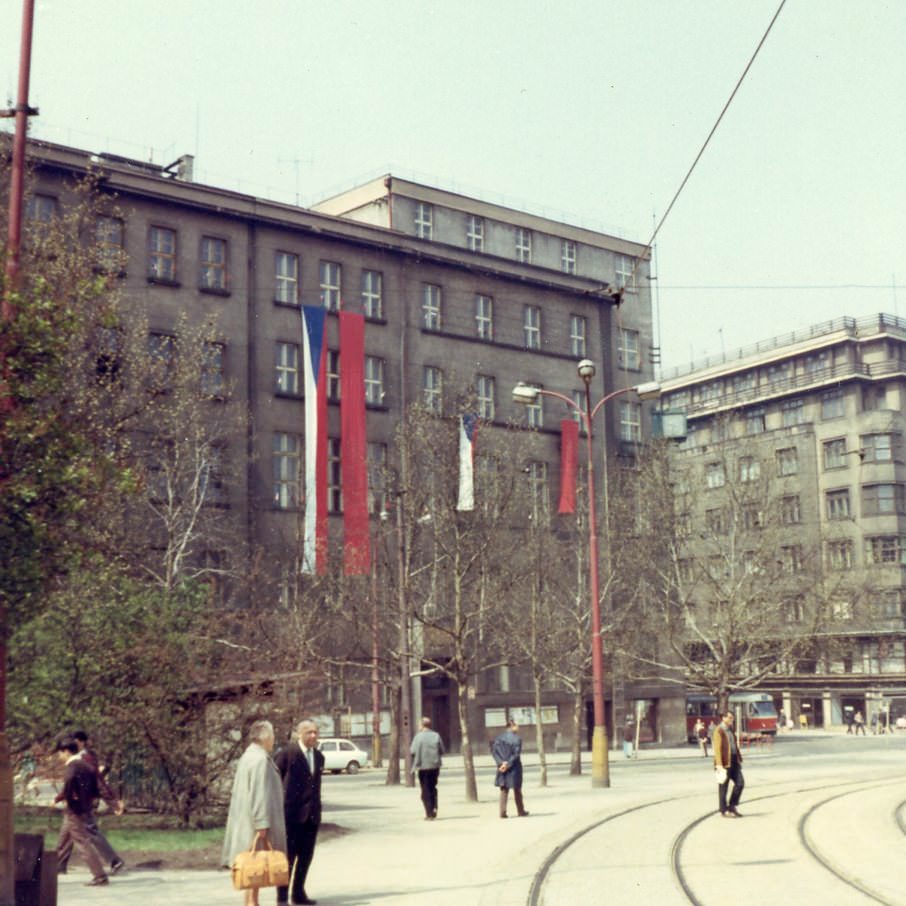 Wenceslas Square in 1969, virtually empty and with a tram line down the middle 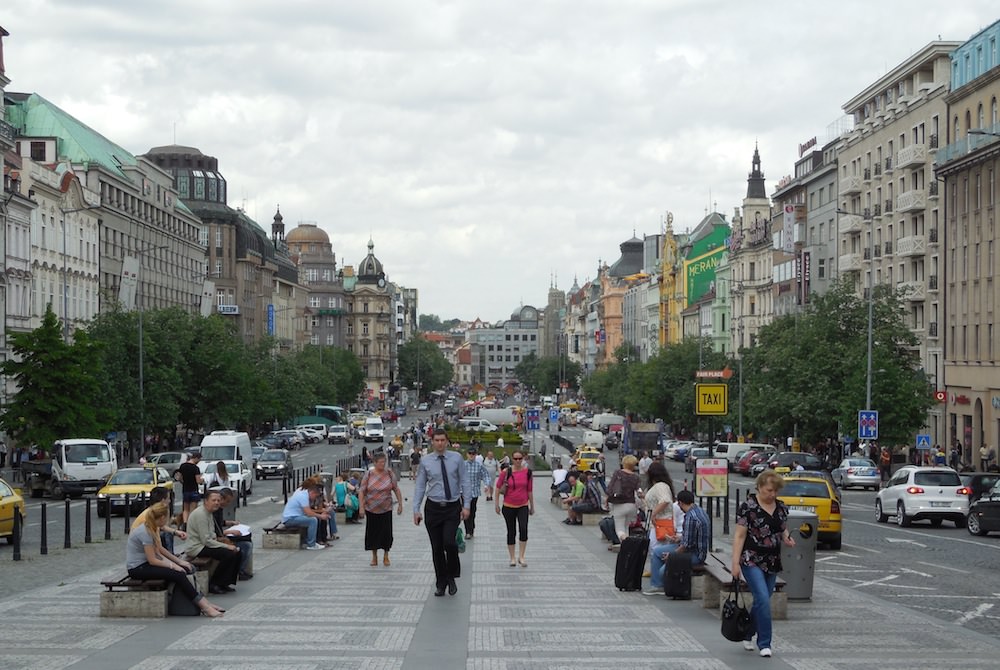 A quick timeline of recent Czech history shows how pivotal the years 1968-69 turned out to be. Czechoslovakia was briefly independent for twenty years between the Austro-Hungarian Empire (1918) and the Nazi invasion (1938). The Russians “liberated” the country after the war in 1948 and kept a tight grip until the Prague Spring of 1968. People were giddy with the prospect of a free press, loosened restrictions, and political independence. However, on August 20, 1968 Soviet tanks rolled into the city and put an end to that brief whiff of freedom.

Mike’s group arrived in January 1969, just a few weeks before Jan Palach, a young philosophy student, burnt himself to death on the steps of the National Museum, hoping to spark a revolt for Czech independence. A few yards down from  Wenceslas Square, just below the statute of St. Wenceslas on his horse, is a small garden featuring Palach’s memorial. 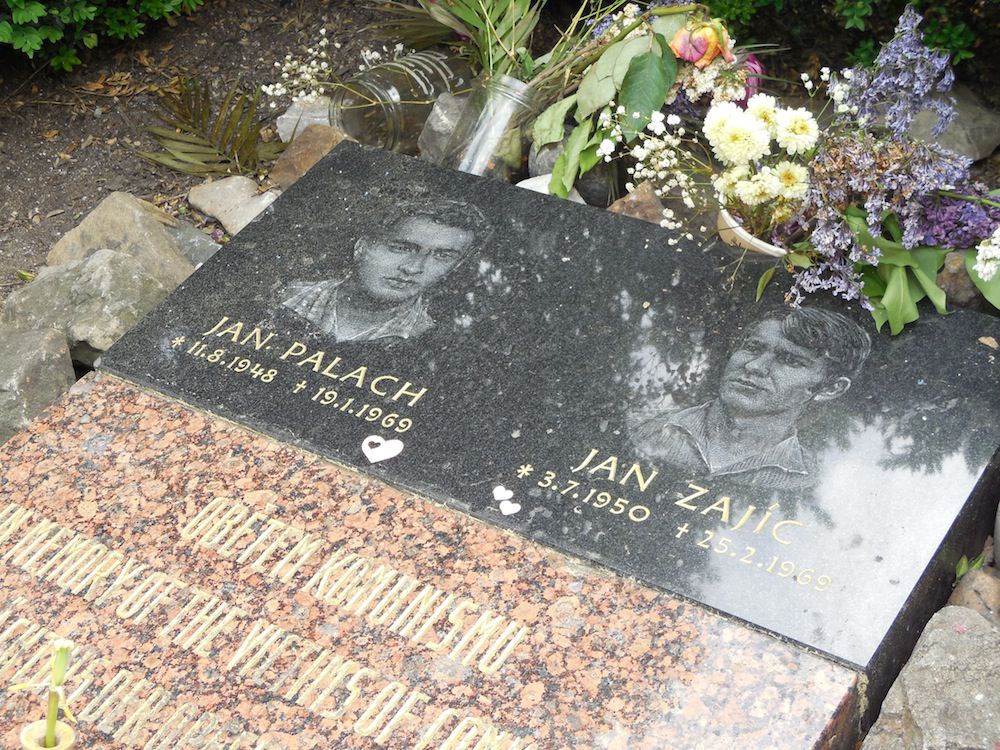 Memorial to the victims of communism, including Jan Palach

Try to imagine Wenceslas Square just a few months later in March 1969. Several hundred thousand crazed Czech ice hockey fans jammed into the square to celebrate their victory over Russia. The tanks and soldiers stayed away that day; the crowd was too intense. The Lewis and Clark students squeezed their way into the square as best they could and shared the excitement, naturally. In retaliation, the Russian soldiers shut down newspapers, radio and TV stations and troops became even more visible in the streets.

Charles Bridge in 1969 with absolutely nothing for sale, unlike today

Take a walk across Charles Bridge today. It has the air of a medieval market, packed day and night with buyers and sellers and performers and beggars. In 1969 the bridge was empty: virtually no traffic, no souvenirs of any sort, rarely tourists, few young people on the adjacent streets, and dead quiet at night. One would only see old men and women sweeping the streets with twig brooms, always dressed in drab browns and grays, or grim Russian solders patrolling with machine guns.

The Czech Republic became a member of the European Union in 2004 and is today wealthy and free. But in 1969, the country was untouched by Western influence, and daily life was Spartan. Mike spent her first month living with a Czech family in Brno, where every room was a bedroom, including the living and dining room. There were no luxuries or appliances at all and the only fruit available was apples. Czech students they met would only agree to talk freely where they could be unobserved. Everyone had a job and the streets were clean, even if the Socialist joke — “We pretend to work and they pretend to pay us” — perfectly described the situation. Mike turned 21 in Czechoslovakia and this travel experience was life changing, as indeed all travel has the power to be. She suddenly understood how privileged she had been with her ordinary American upbringing, and she felt truly proud to be American. Moreover, her concept of ‘history’ had undergone a major adjustment. After all, drinking beer at a pub founded in 1499 will do that to an impressionable young person. 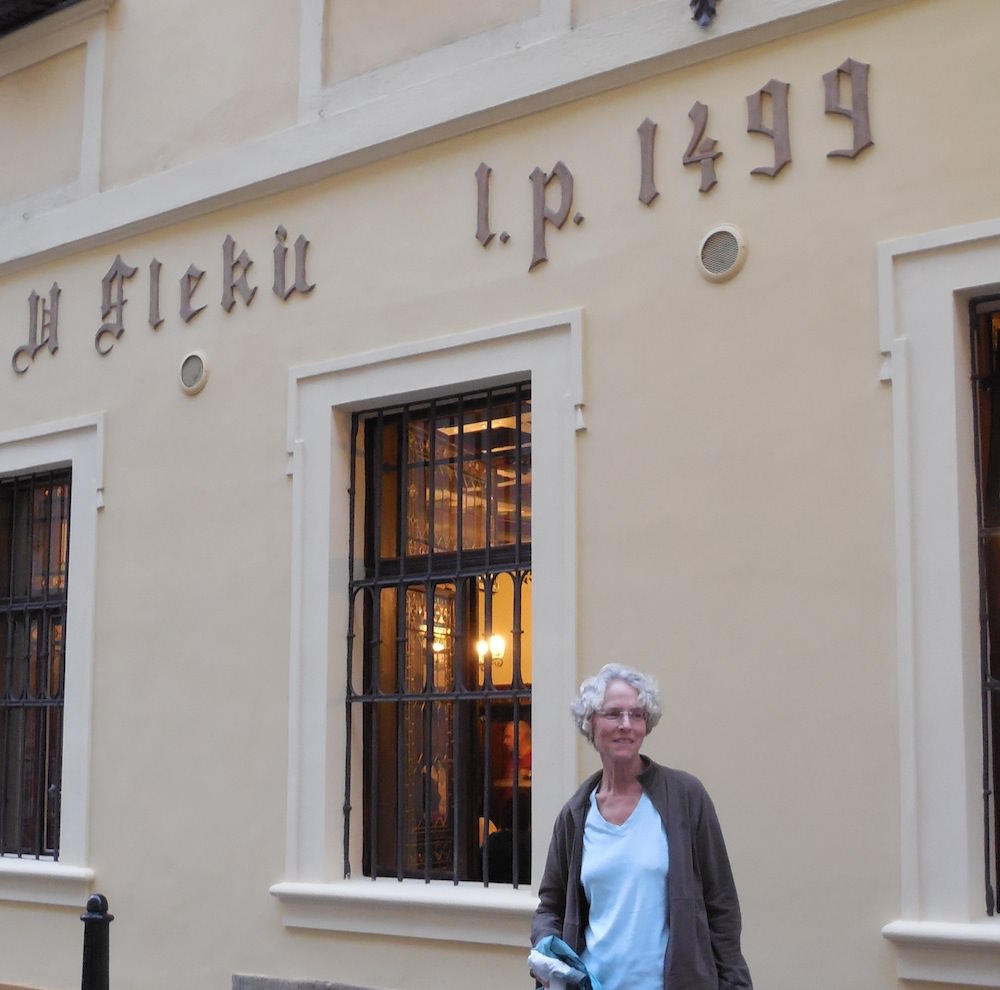 Mike in front of U Fleku forty-five years later

Today’s visitors to Prague can get a taste of the past, starting with that more than 500 year old pub, U Fleku. The Lewis and Clark students drank here because it was one of the only places in the city that served dark beer. In those days, U Fleku was cozier with small rooms instead of today’s vast open-air garden. For a big night out, they would eat steak with a fried egg on top at the white table clothed Europa Hotel. The Good Soldier Schweik Pub or U Kalicha  still exists and was another favorite, although it is now very touristy. Read the book The Good Soldier Schweik by Jaroslav Hasek to truly appreciate the restaurant and the wicked cynicism that enabled Czechs to survive the Russian occupation.

But mostly the students drank in canteens and ate in cheap buffet-style eateries with stand-up counters; these sorts of places have disappeared. However, on this visit, we did eat at Ceska Kuchyne (Czech Kitchen) across from the Havelska Market, and Mike declared it authentic: cheap, tasty, no English spoken, point to your chosen dish in the food line, and do not lose your tally sheet!

Museums from the Communist Era

The top of Wenceslas Square features other reminders of this era besides the Jan Palach memorial. Just to the left of the National Museum is the ghastly, blocky Soviet-era former parliament building, complete with worker-art. Go ahead and pay the small entrance fee to wander through for a whiff of the oppressive atmosphere. On the columns of the National Museum itself, one can still see patches from Soviet bullets. At the bottom of Wenceslas Square, the Museum of Communism must not be missed for its coverage of the grim reality of life under the Soviets. And it must be remembered that Middle-aged Czechs once lived this life. 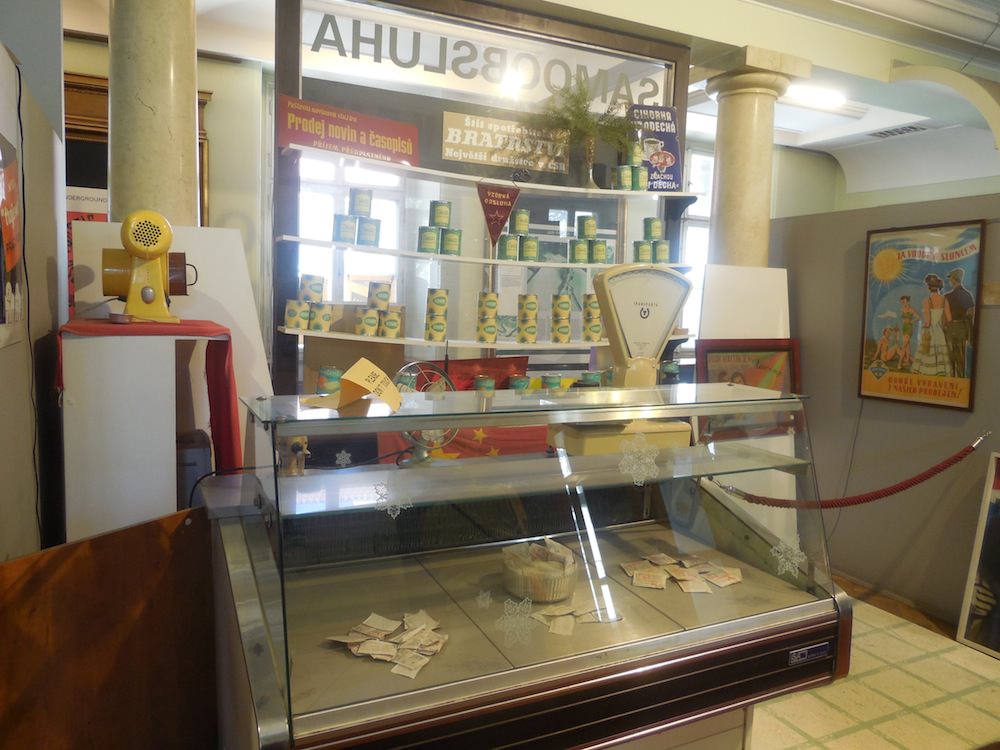 Replica shop window from the Museum of Communism.

One cannot go back into the Communist past, of course. But it is possible to read the stories hidden in plain sight. Imagine Russian soldiers patrolling in pairs, machine guns slung over their shoulders. Find quiet, untouristed, even slightly shabby streets like Provaznicka or U Kotcich and wander. Picture old people sweeping the streets with twig brooms. See shop windows almost bare of items for sale but drab shoppers lined up nevertheless. One feels the city’s magic more deeply with an understanding of the real Prague, whose shiny splendor is very new and layered over a very recent, painful past. As always, knowledge of history deepens and enriches the travel experience. 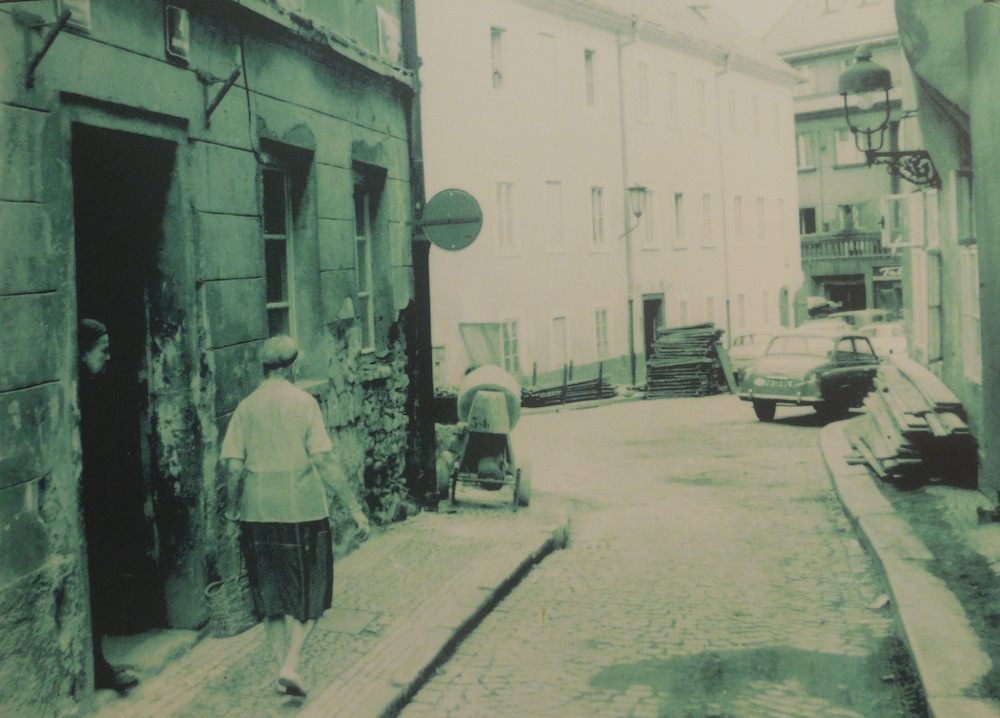 Shabby street scene from the communist past

Written by Guest Contributor Kathy Fritts for EuropeUpClose.com   Kathy Fritts is a retired school librarian who has lived and worked in six different countries. Now she travels for fun and writes to educate and encourage readers to take a chance and enrich their lives by traveling.

Second photo is not Wenceslas Square, it is Namesti Miru. As for the Russian comment immediately above, you really think the Russians made it better than it might have been? Is that why so many from Czechoslovakia, Poland, East Germany, and all over the Eastern Bloc fled to the West?

I do feel that this article can be a bit humiliating for Russians. Although communism is a mistake, it is slightly inconsiderate to blame the soldiers, for example, for their grim faces as you do not know them in person. It was their job to patrol the streets and by no means, their fault. The situation was bad, but who knows, without the Soviet Union it could have been worse in the post - war Era. Otherwise, it's a well -written article.

Prague was on my list to visit. After reading this article , I will move it to the top of the list, and I wish I can travel there soon.