East London is one of the most colorful parts of the UK capital, not just visually but also culturally. This is thanks in part to the number of creatives who have flooded this corner of the city in recent years, but also the diverse neighborhood it has been for centuries past. This gentrification usually means one thing: Good Food – and hence the perfect location to go on a London Food Tour.

And as I discovered on a culinary walking tour of the area surrounding Liverpool Street Station with Eating Europe, this colorful past has shaped the food and architecture of the area too.

My East End London Food Tour started at Old Spitalfields Market, an open warehouse that had once been the site of a Roman burial site. Today, the bustling hub sells street food and goods every day of the week. It’s here that our group’s guide, Flic, began the tour with tales of east London from the Middle Ages to present day. 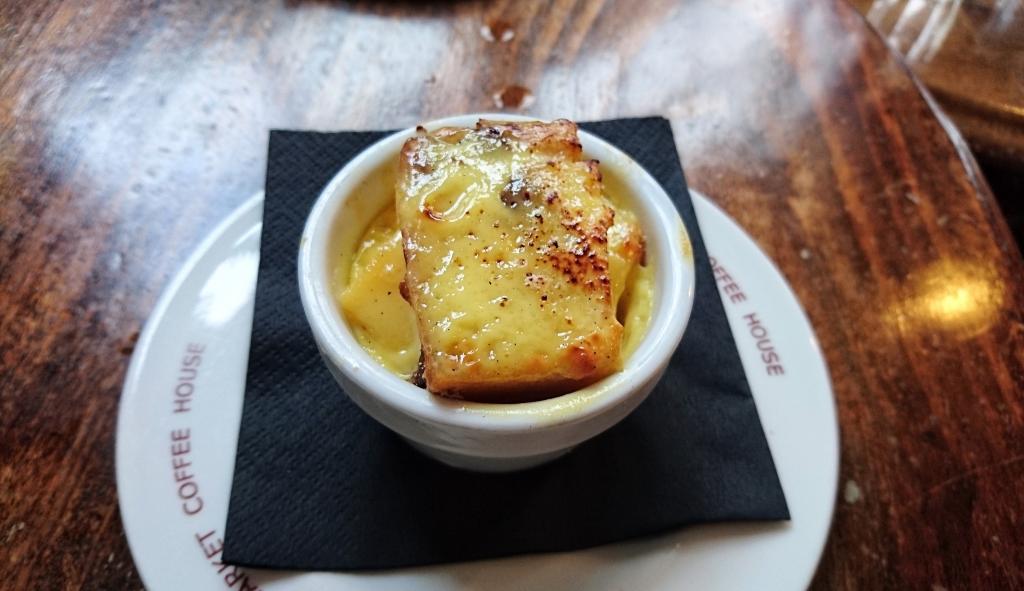 As the tour began at 10 am, it was still breakfast territory, so we crossed the road to St John Bread and Wine for our first food stop. They do a great bacon sandwich, which we tuck into with a dip of apple ketchup.

Just around the corner is our next stop, The English Restaurant, which is housed in a former nut factory that’s been restored with warm wood panels and paintings of the countryside. The pub-come-restaurant is a very popular drinking den for nearby workers but they also cater some true English classics. It’s here that we get a taste of a typically British dessert – a bread and butter pudding with custard.

After that boost of sugar, we wandered a little further into the neighborhood surrounding Old Spitalfields Market. It’s in these streets that we got more of a sense of the history of the area. 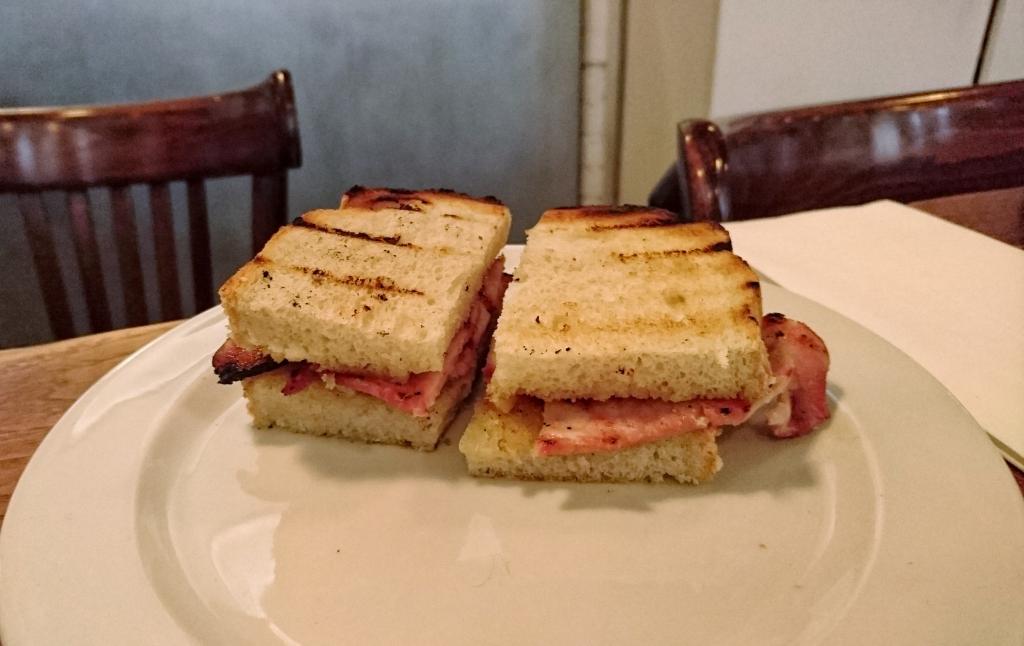 Carved into the wall of one building were the words ‘soup kitchen for the Jewish poor,’ signifying a period in east London’s history when there was a big Jewish community. Road names like Artillery Lane gave clues as to the type of industry that operated in the area in the past. And bricked-up windows were leftover from a time when homes were taxed according to how many windows they had. 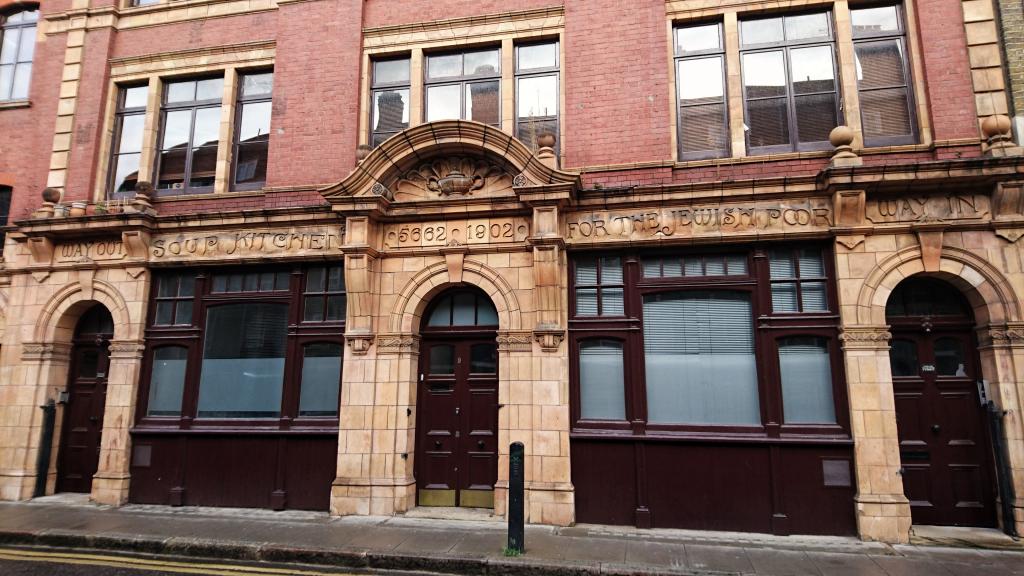 We soon worked up an appetite for the next portion of the journey – the savories.

Our route took us back to Old Spitalfields Market to visit Androuet, a cheese emporium that originated in France. There’s a huge selection of British and French cheeses on offer there, and we tasted a Cheddar and a Stilton. 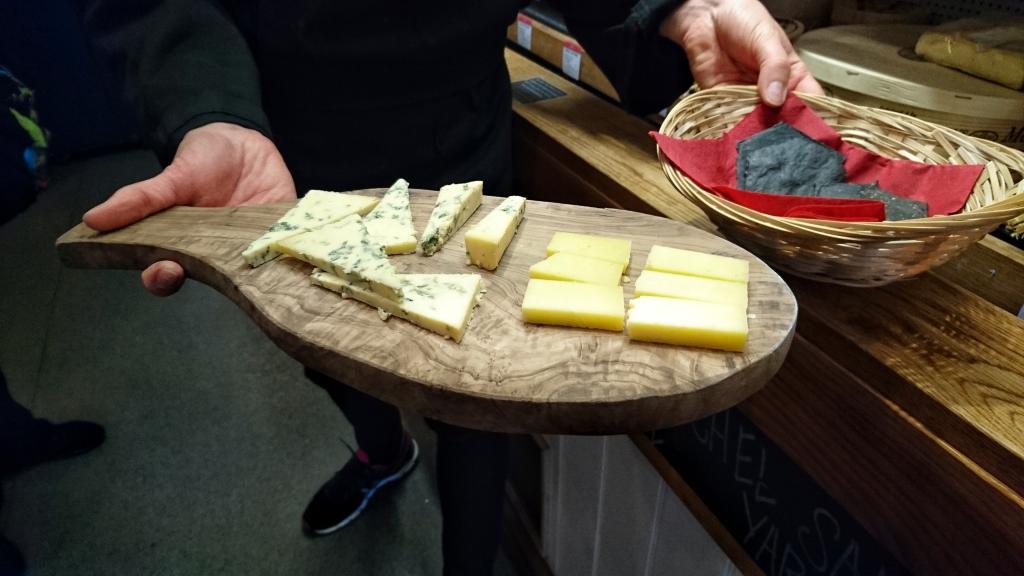 Down the road is Poppies, which is decked out in 1950s memorabilia and serves some of the best fish and chips in London. There, we had a portion of their fish and chips with mushy peas, ketchup and tartare sauce. According to Flic, the combination of fish and chips was invented in east London, which made this stop very apt. 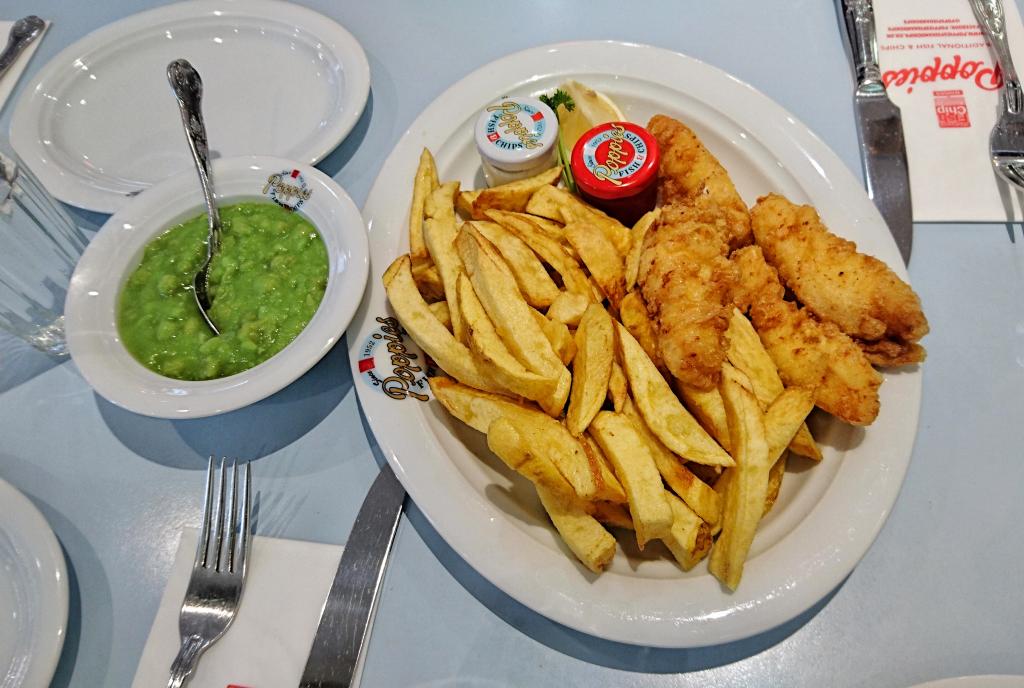 As we wove through the streets of Spitalfields, we also stopped to admire some of the Georgian architecture on Wilkes Street and learned how they were once home to the French Huguenots, who brought the silk industry with them. And later, how the Irish took over the trade. Today, it’s a trendy neighborhood where people do fashion shoots in the streets and use the homes for filming period dramas. 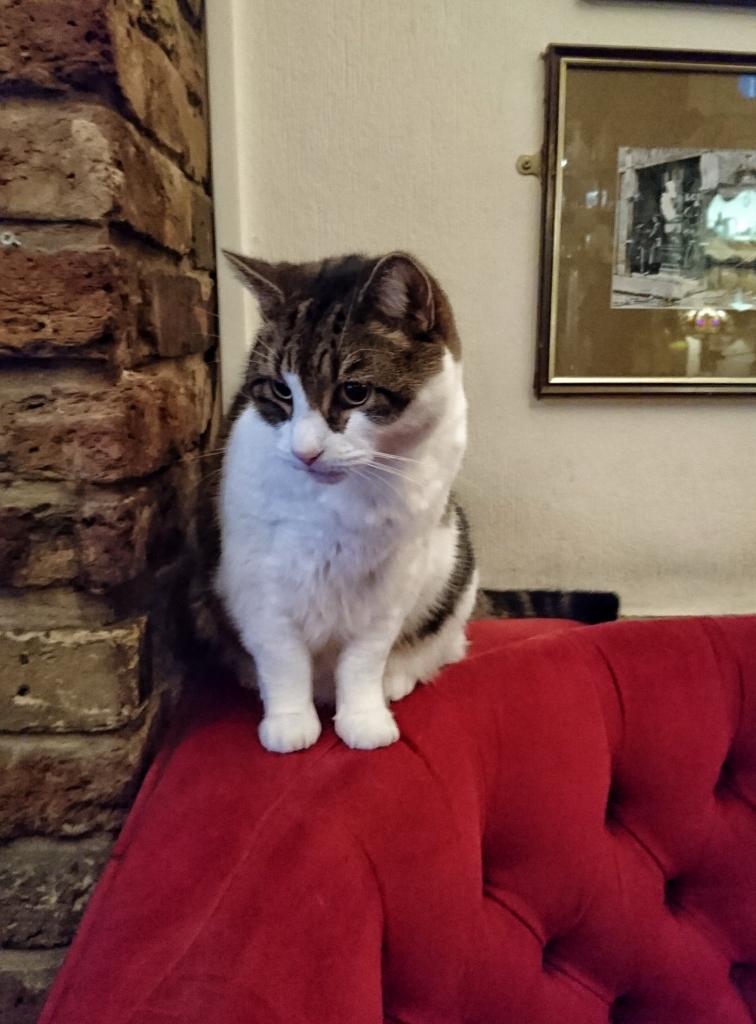 The Pride of Spitalfields

No London Food Tour would be complete without a visit to a traditional British pub, which is apparently meant to be fashioned like someone’s living room. And at The Pride of Spitalfields, we found that. It’s decorated with carpet, curtains and vintage household items and they even have a cat. And while admiring the kitsch decor, we tried a beer and cider each.

The booze would have gone down very well at our next stop – Aladin. It’s one of the many Bangladeshi curry houses on Brick Lane, which is also known as the Curry Mile. We tried three different ones here, including the very British chicken tikka masala, all served with pilau rice featuring the colors of the Bangladeshi flag. 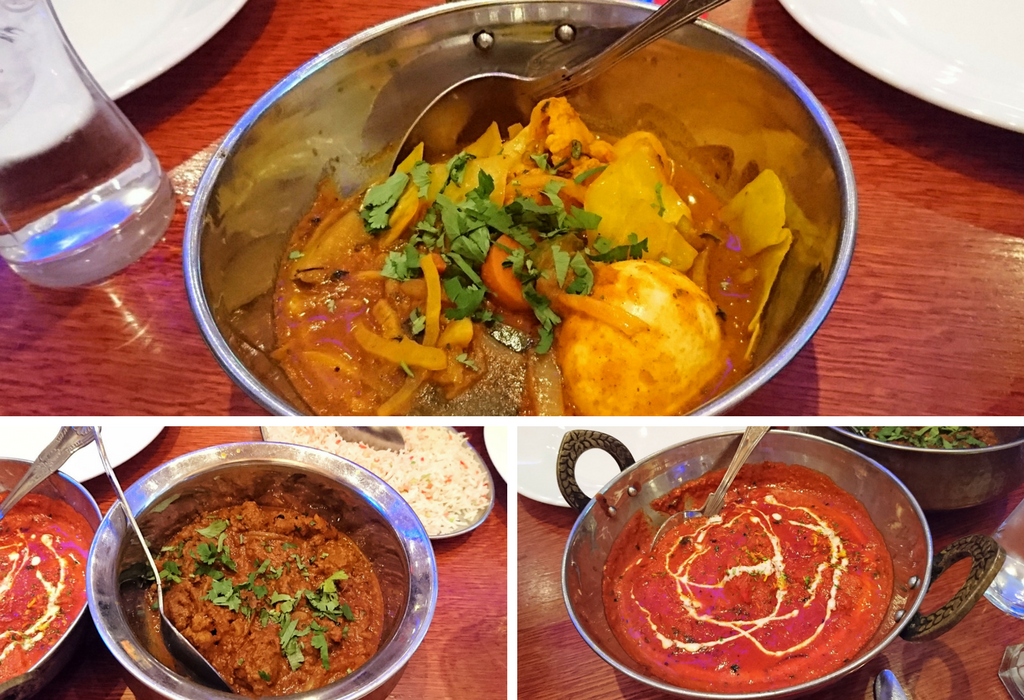 It’s not just the food that’s colorful though. As we ventured into Shoreditch, there were a lot more graffiti and street art on the walls and on the ground. You could spend a whole day just photographing them.

Our final savory stop is Beigel Bake, which is known for their Jewish-style salt beef bagels. They are particularly good with the sweet pickles and the mustard packs a real punch. 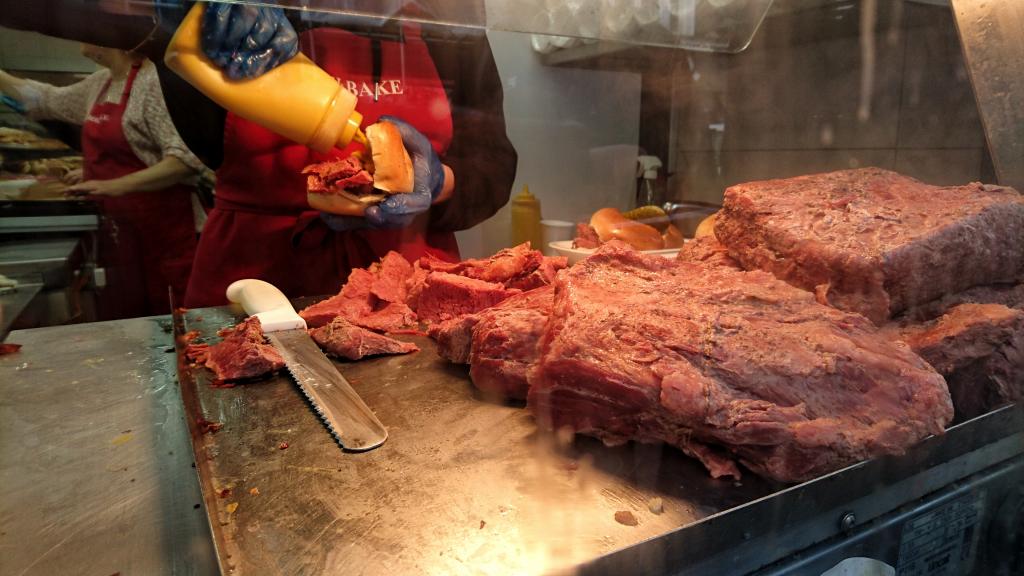 Of course, no food tour would be complete without dessert. This, we found at Pizza East. They do a rich and indulgent chocolate and salted caramel tart that will satisfy any sweet tooth. 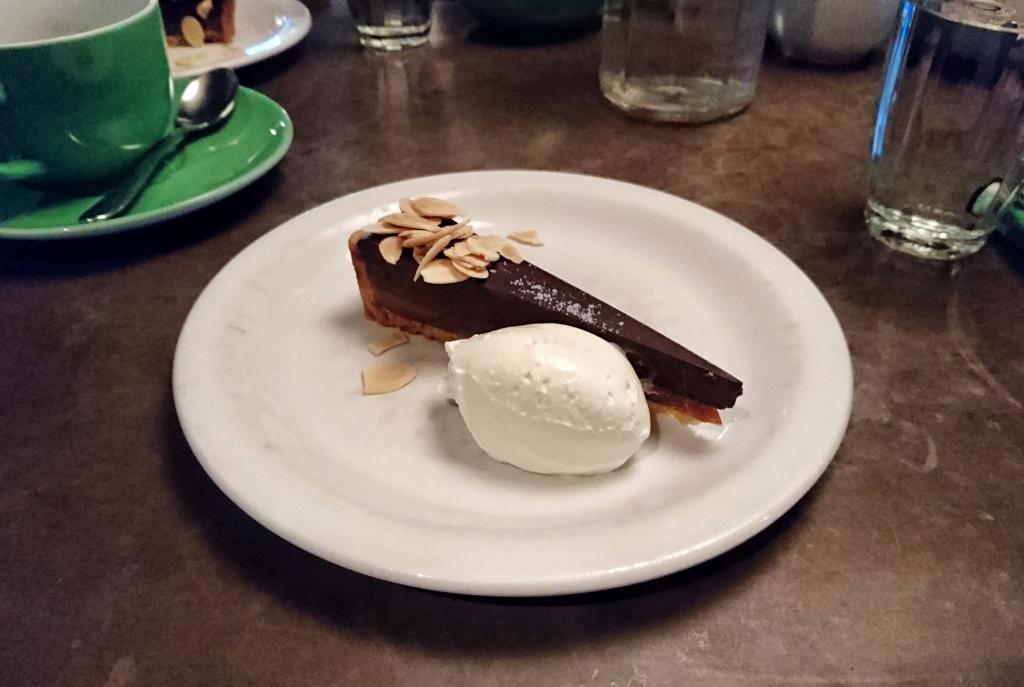 Having been a Londoner for more than seven years, I’ve been to East London plenty of times. But even as a resident, I learned a lot about the history of the area and tried some of the places that I wouldn’t normally think to visit. I’m willing to bet that you’ll leave filled with food and fascinating facts – I certainly did.

Eating Europe has a number of London Food tours. I was invited on the East End Food Tour, which costs £69 per person for a four-hour tour sampling eight bites that define the area. The tour runs Monday to Saturday from 10 am. 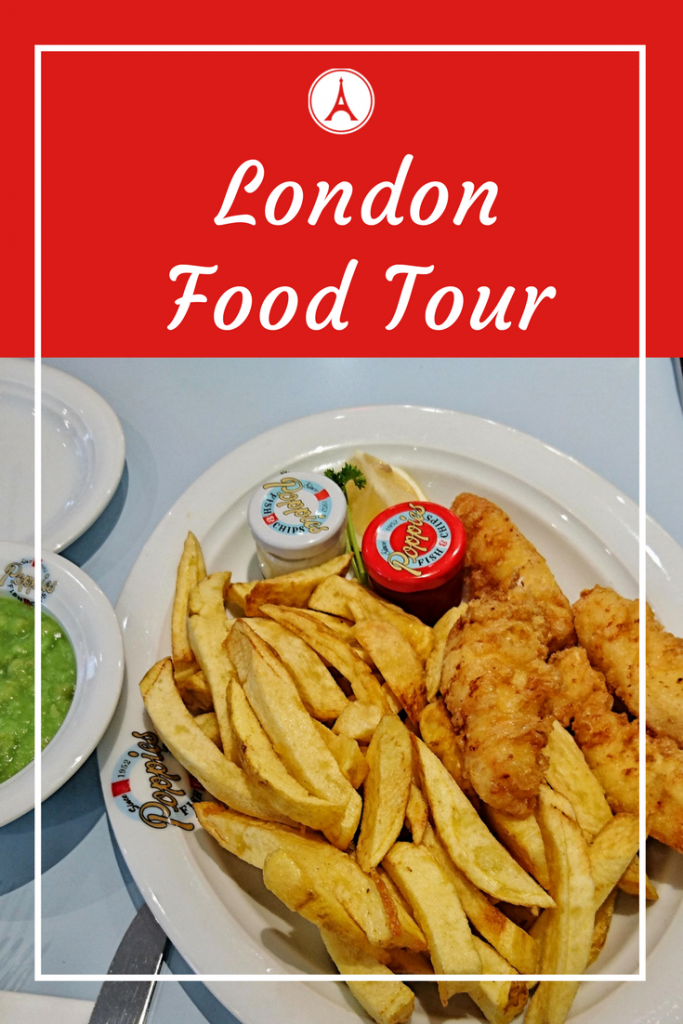 Nice photos! I’ve got to agree with you on walking/taking public transport too. My favorite way of exploring anywhere.